Andaman Islands : First Trip With My Better Half 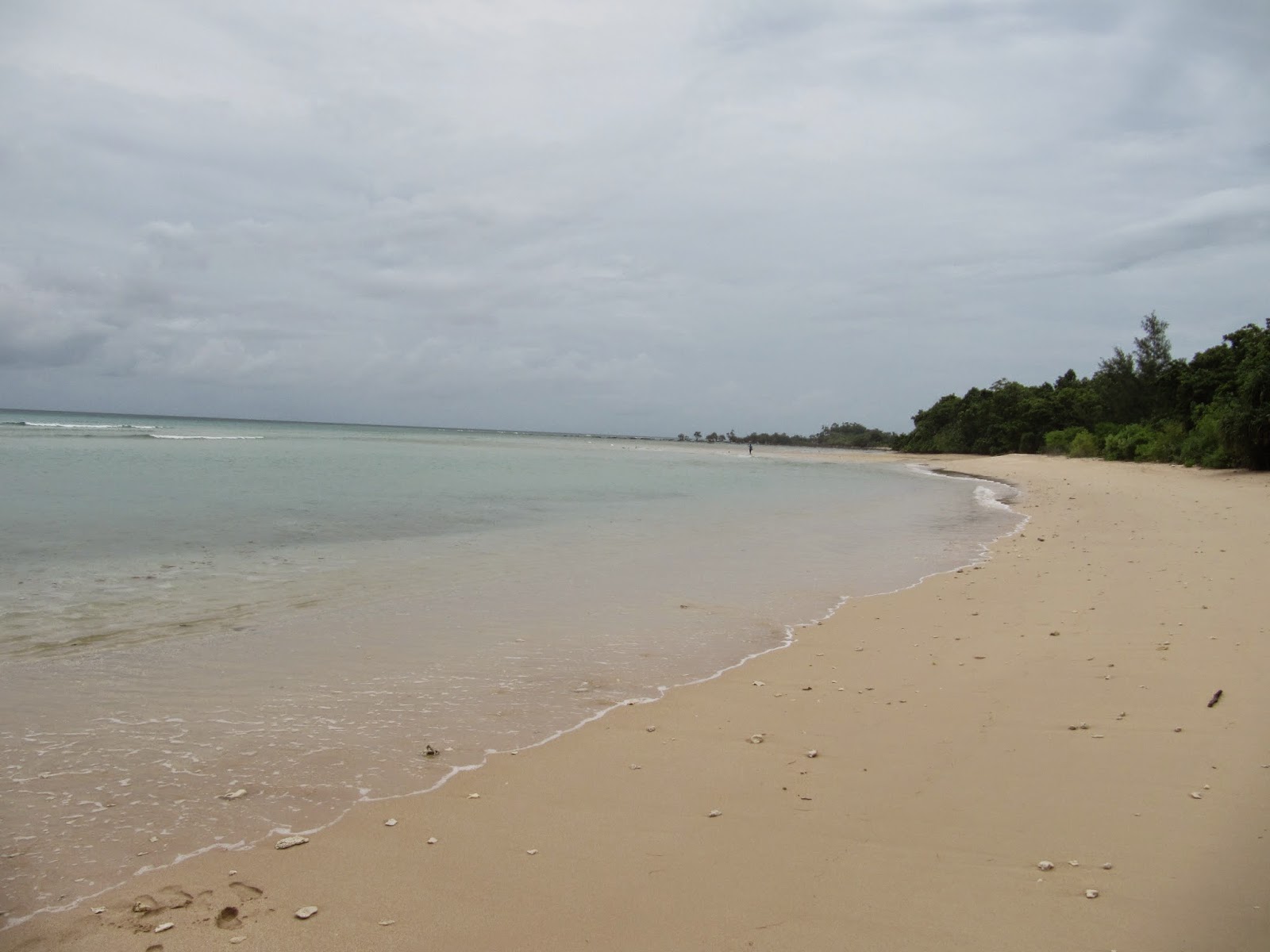 With a monsoon wedding , the options for the honeymoon destinations were limited to places to where they would be a bit subdued . Ofcourse monsoons have their own romantic charm, but not to the extent wherein you would be drenched to the core for the entire duration of the trip. Keeping these in mind decided to go for the isolated Andaman islands, but still there were reports that there was a 50-50 probability of the rains lashing these islands in the first half of the September . But if you are expecting some decent weather, completely deserted beautiful beaches all for yourself and your better half then September is the month to go. 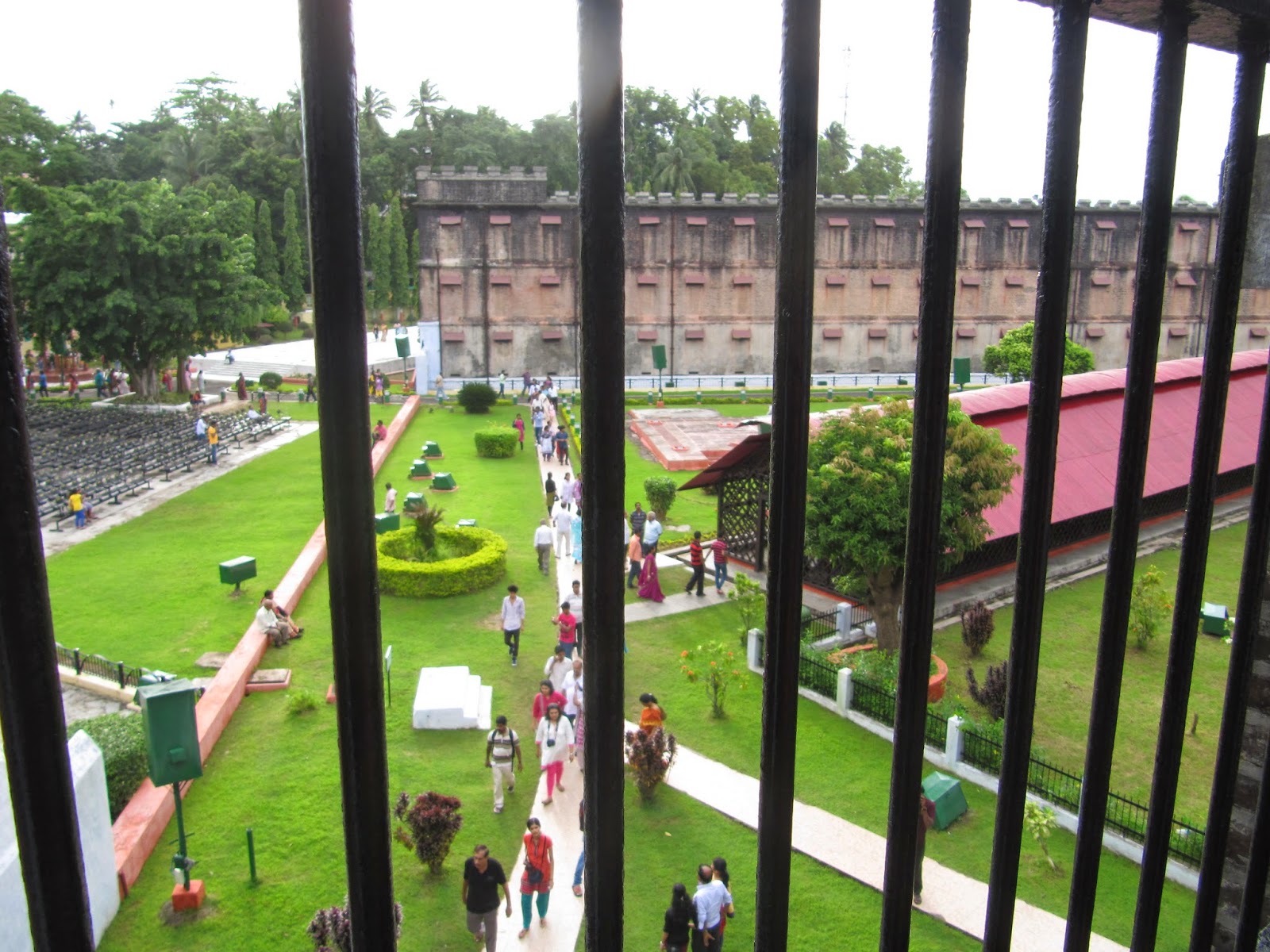 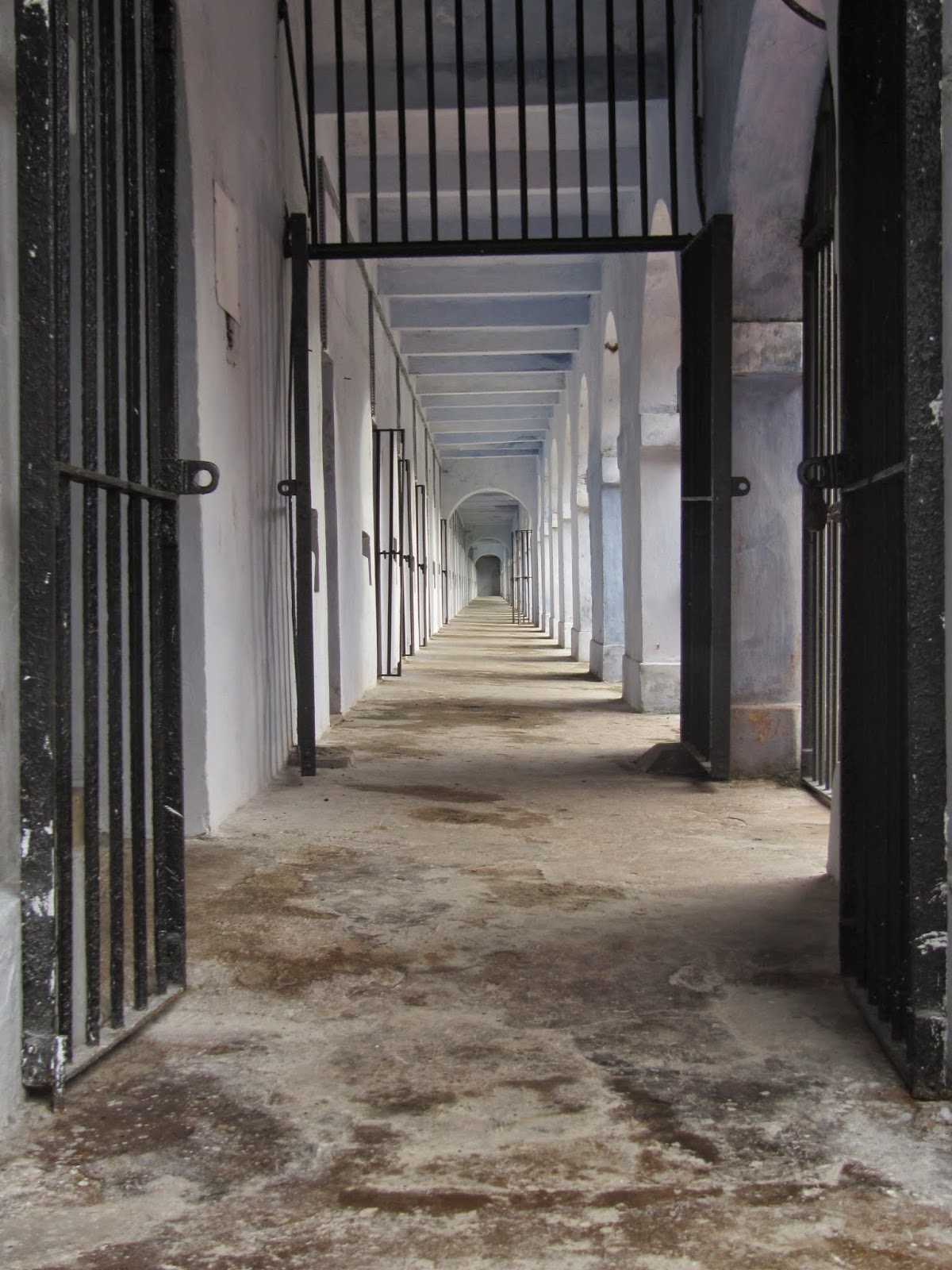 Our tour operator was Andaman Excursion(http://www.andamanexcursion.com/), whom we had shortlisted after a bit of  research over the net. Ofcourse there were tried and tested tour operators like MakeMyTrip.com , but the package offered from the former was much value for money with the same goodies offered. We had accommodations booked at the J Hotel in Port Blair and The Wild Orchid at Havelock Island. With no direct flights from Bangalore to Port Blair one has to go via either Chennai or Kolkata. 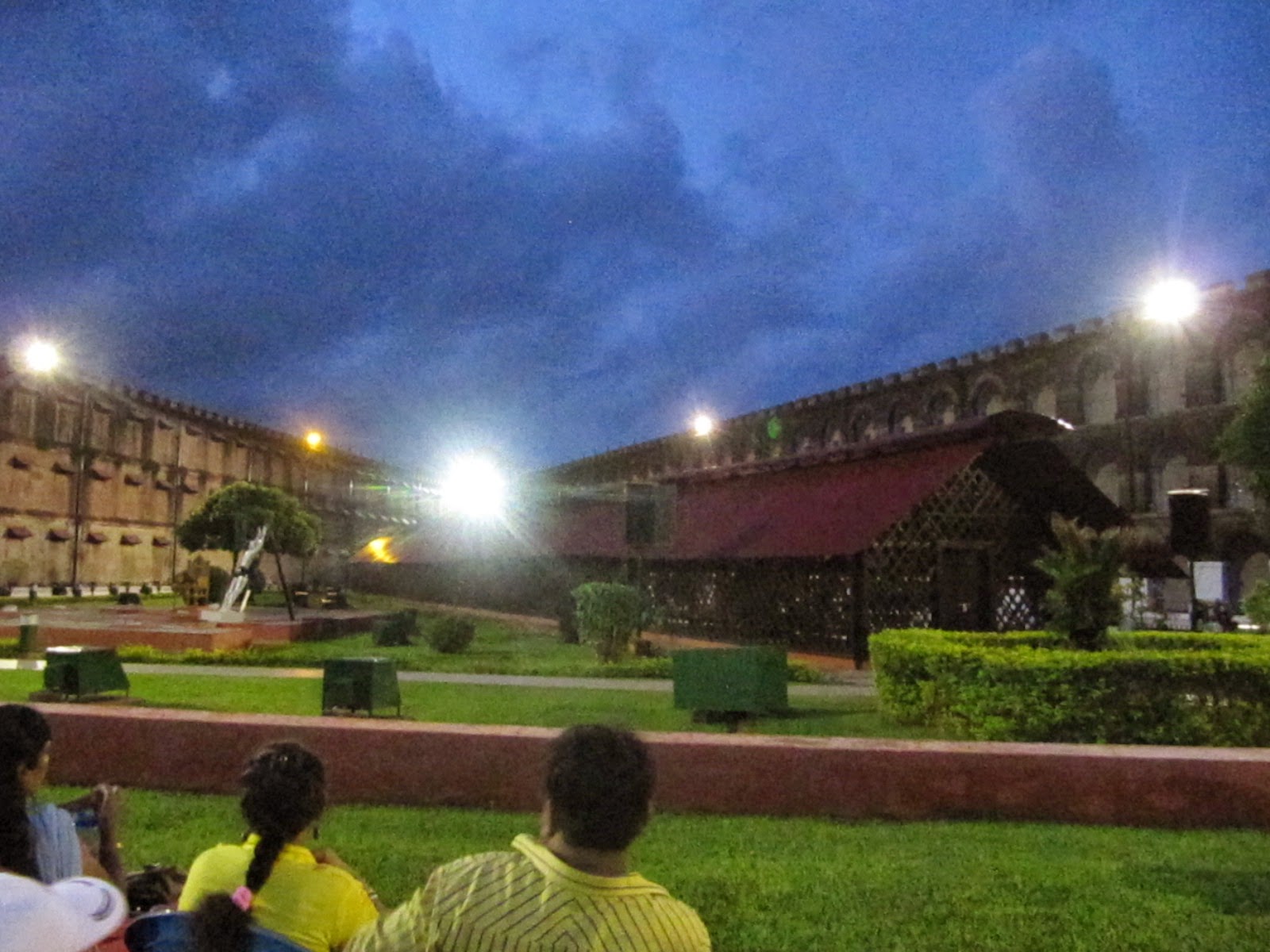 Day 1 of the package tour we landed in Port Blair at around noon. Before we landed at Veer Savarkar Airport we got some great views of the lagoon filled beaches of these islands. We were promptly received by the organizers and were taken to our rooms. The remainder of the day was spent in exploring the cellular jail during daytime, exploring a beach at Port Blair which was not any different from the beaches of the mainland and after night fall back to the cellular jail for the sound and light show. The tour of cellular jail was quite good. At many points when the guide is giving an illustration of the how the life was at the jail , one cannot stop cringing with disgust at the treatment meted out to the Indian freedom fighters. The name of the cellular jail is given due to the initial shape of the building , which has been subsequently changed and only 3 of the original 7 wings are standing. The view from the terrace was quite good, including that of North Bay island, the view of which is incorporated in the backside of the 20 Rupee Indian currency note. The light and sound show after dark was quite good, but we were constantly bugged by mosquitoes, therefore one has to be prepared for these. 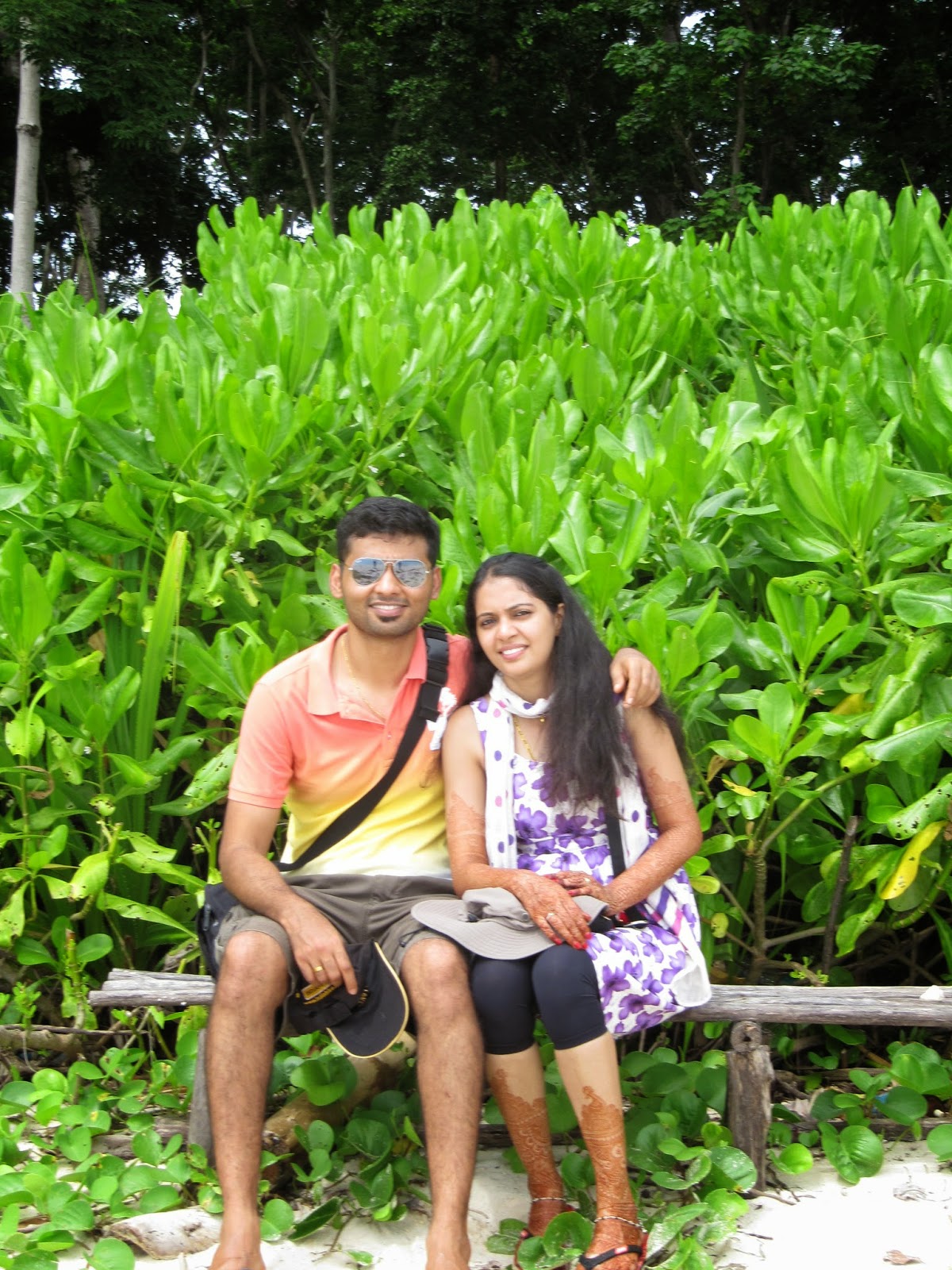 There are 2 types of transportation between the islands, the private ferries which are a bit more luxurious and the government ones which are a bit more spartan. Unfortunately for us the private ferries had not yet started operations, which generally start after the monsoon season and therefore we were to catch the Government ferries which was a pain point during this trip. First we took an early morning ferry to Neil Island which was around 2.5 hrs in journey length. This is where we were to witness for the first time the beautiful  white sanded , aqua blue beaches of Andaman. We were taken to a number of places such as the natural rock arch (which was after a tough walk among rocks especially if one is wearing slippers :P), sunset point and finally the Ramnagar beach where certain activities are available such as glass bottom boat rides and snorkeling. By afternoon we caught the ferry to Havelock island after a lot of confusion over the boat timings and such. We were directly taken to our resort in Havelock and spent the remainder of the day exploring the awesome beach just 2 mins from the resort. 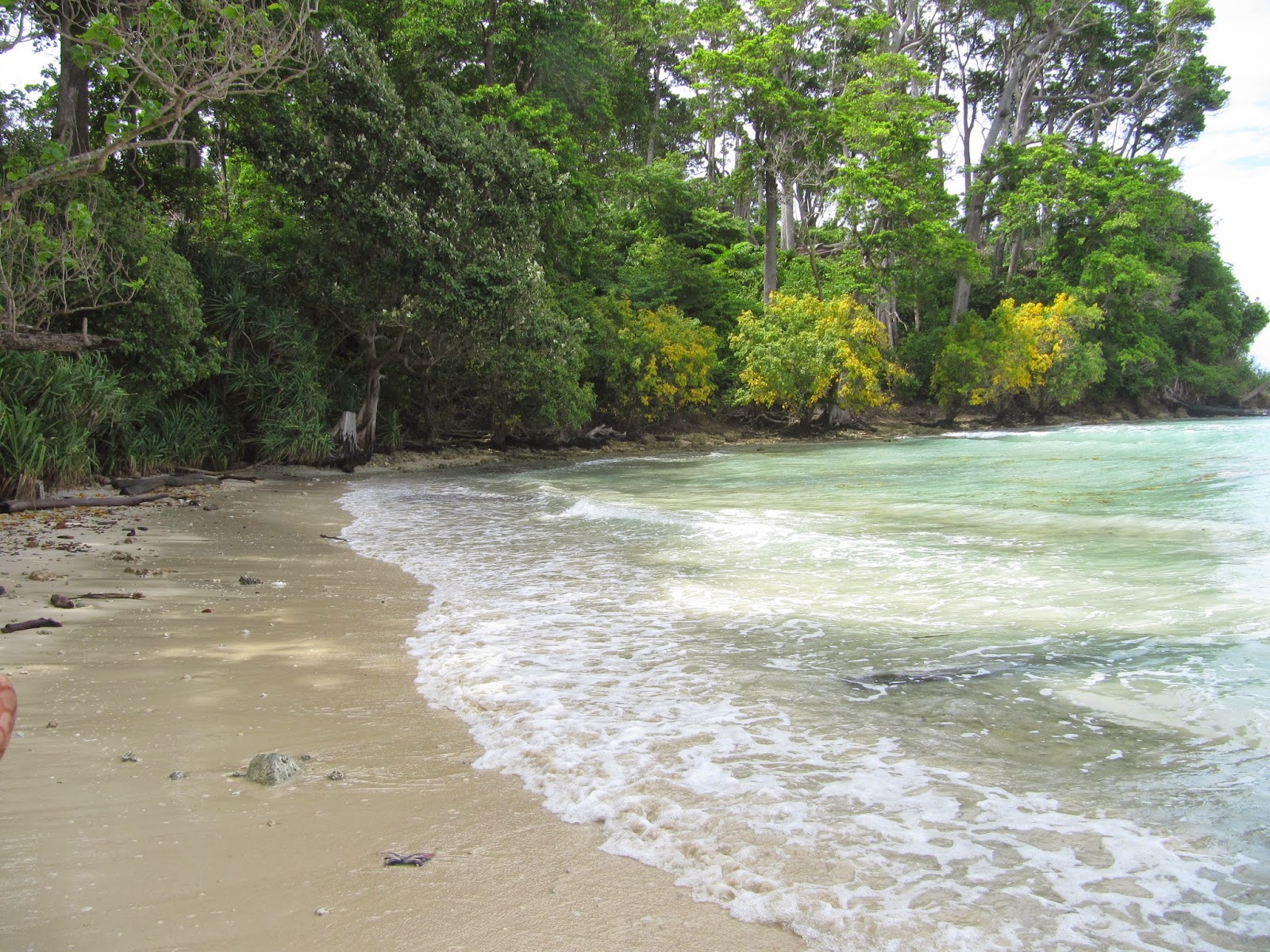 Day 3 of the package included a trip to Elephant beach, but while we were waiting in the bright sun the weather suddenly changed within no time and we were facing a gale storm. By this time the boat ride to this beach was cancelled and while we were contemplating what to do next our tour guide offered a choice to do scuba diving at Barefoot Scuba and that too at a discounted price of 2.5k/head. Therefore we were taken to the Barefoot Scuba resort and within no time we were gearing up for the dive. Since this was my second scuba experience I was not scared like I was during my first dive, but I wanted my wife to experience this whole new world. But my wife being a non-swimmer and a bit claustrophobic naturally had some initial apprehensions. But the instructors were good and within no time she was also into water and enjoying the colorful underwater views of the Nemo Reef, so much that in the end she didnt want to come out of the water :P. In the evening we were taken to the gorgeous Radhanagar Beach, billed as the most beautiful beach of Asia and believe me it lived upto that expectation.  An endless beach of white sand flanked on both sides by clear aqua blue water and dense jungle on the other side. And to add cherry on top there was hardly anyone here, considering the huge expanse of this beach. This is almost an half an hour drive from the main market area of the Havelock island and one gets to know the true size of this island. The remainder of the day we just lazed around and had a candlit dinner which was initially planned to be on the sea side , but unfortunately had to be taken indoors due to heavy rains that night.

The next day we were back to our boat ride to Elephanta beach, but with weather being unpredictable they took us to place somewhere in the middle of nowhere where some water sports were organized. After that a ride through the mangrove forests was arranged. Came back to our resort and freshened up after having our lunch at the Fat Martins Cafe (just near the entrance of the Wild Orchid Resort) which was our favorite food destination at Havelock. The food here was lip-smacking to say the least and even better than Red Sapper Restaurant which was the main restaurant of the resort. Caught the afternoon ferry back to Port Blair and by nightfall were back to the capital of the beautiful islands.

On the 5th day of the trip we were taken to North Bay Island and the boatsmen were literally forcing us to take a glass bottom boat ride. Since the water near Port Blair didnt seem that inviting we flatly refused and were a handful of people who did so. After that we the met the people who went for this ride, and they said that they hardly saw anything. Therefore its best recommended to avoid such activities near Port Blair since the underwater wildlife is minimal over here. When the other people were taken for this "one grand ride" we explored the island and the lighthouse. We were even offered a tour inside the lighthouse, but the guy who offered us was looking all creepy and we were just 2 of us, therefore we refused that offer. After North Bay island we were taken to Ross Island which had housed all the British Officers and hence was considered the luxurious part of Andaman. Presently under the control of the Indian Navy this island has a lot of ruins of the bygone era such as bakery, church, bungalows, market place etc. It also houses the Japanese bunkers which were built during their occupation of the Andaman Islandsin WWII. One has to take a long walk to explore the island and it was a good experience walking along with deer and peacocks which have been introduced into these islands. 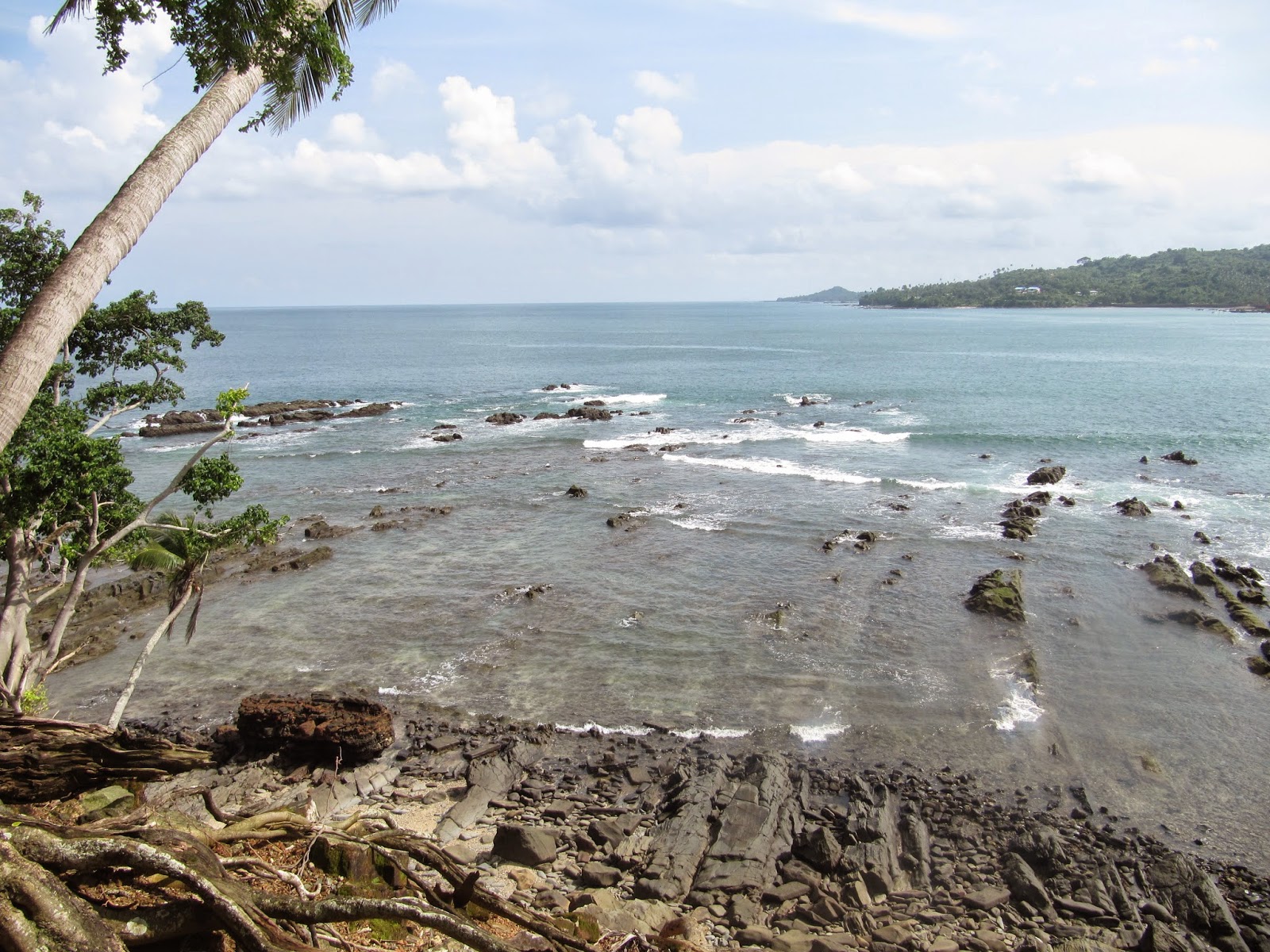 Finally the tour was coming to an end. We had some time before we took an afternoon flight to Chennai, therefore we were taken into 2 museums. The first one was the Samudrika Museum run by the Navy which houses all the different species of the underwater universe such as corals, shells, fishes etc. And the other museum we were taken was the Anthropological museum which mainly concentrates on the various tribal groups residing in these isolated group of islands. Both of these museums were good and we enjoyed spending our time over here. Hence concluded our memorable trip to one of the most isolated part of India from the mainland. 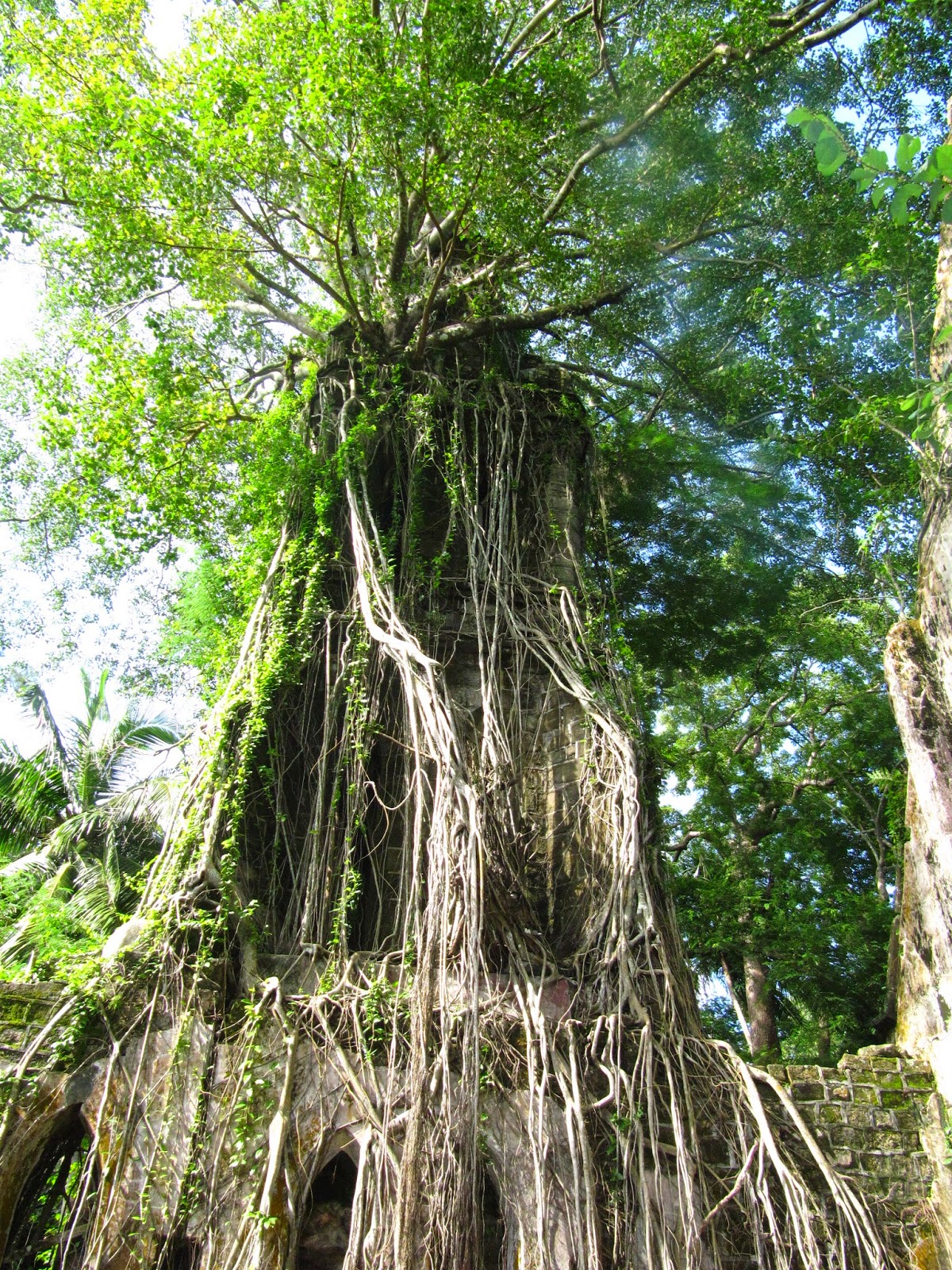 During this trip my wife popped a question, as to why people go on a honeymoon. Apart from the obvious ones everyone knows about :P, I think it is to bring 2 people together closer and according to me nothing brings 2 souls closer than travelling to some beautiful location, wherein the good memories and experiences are shared and get etched in the mind for ever !!!!! 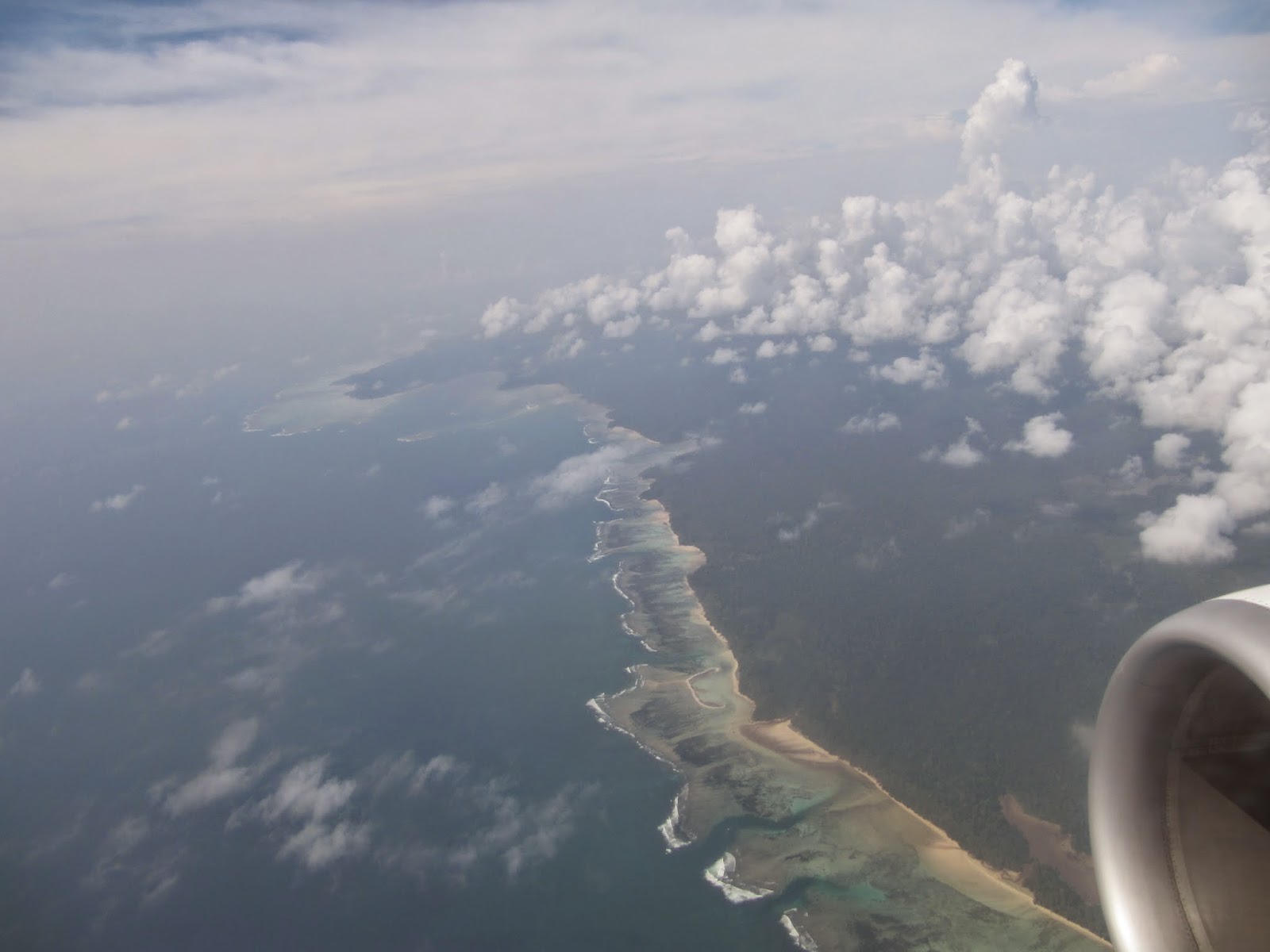