A Pedal to Pearl Valley 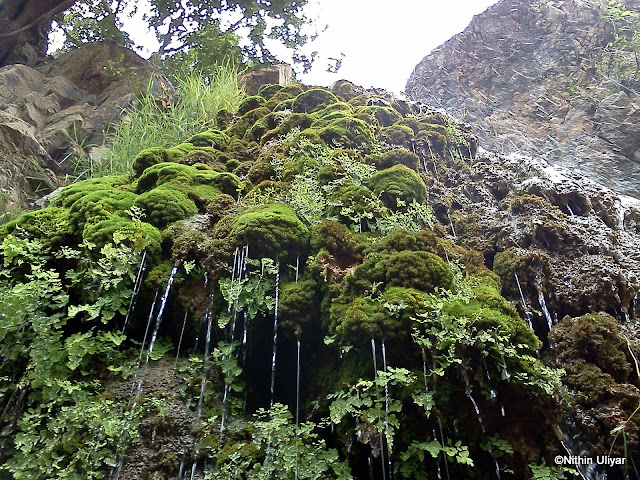 Gone are the days when I used to plan trips especially cycling trips with just a couple of days into the future. In my present situation of  "earning and learning" got to plan everything in advance and for this particular cycling trip to Pearl Valley planning was done nearly a month back after getting to know my mid-term exams schedule. Also this time there were 2 newbies to long distance cycling (Shashi and Ravi), and with Raghu ditching this trip (citing out of the world reasons like bike puncture :P) I was the only guy experienced with long distance biking, hence felt like Dronacharya :P.... Well just a bit :P. 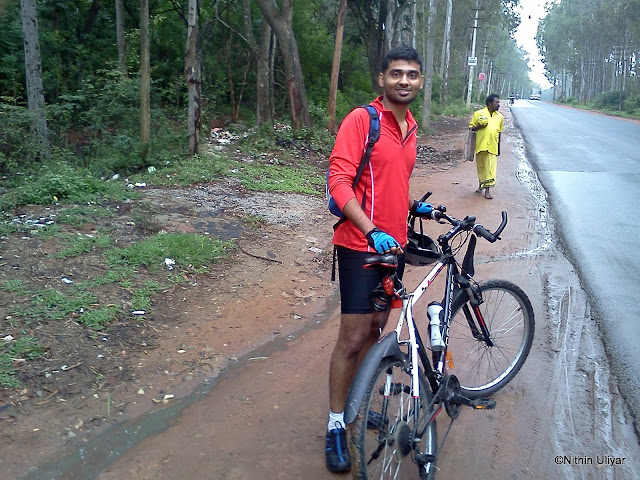 Plan was to start early on a lazy Sunday morning of 31st July, thanks to the overcast weather of Bangalore with a few drizzle spells here and there. A perfect condition for long distance cycling, and this condition was maintained for the entire duration of the ride. So much so that it was not at all required to use any sort of sunscreens which in any other condition would have resulted in a severely sun burnt "Mr. Nithin" :P. Ravi was to arrive from Malleswaram and he left home quite early and Shashi came near my house and the first thing that came to my lips were  WTF ??!!!! (the first profanity I uttered for the day :P). He was wearing a full length jeans pant and a huge backpack filled with eatables and other stuff. I on the other hand had my tights on and couple of bananas in my so called backpack. A complete contrast of sorts. A sort of before and after mug shots of a weight loosing ad. :P 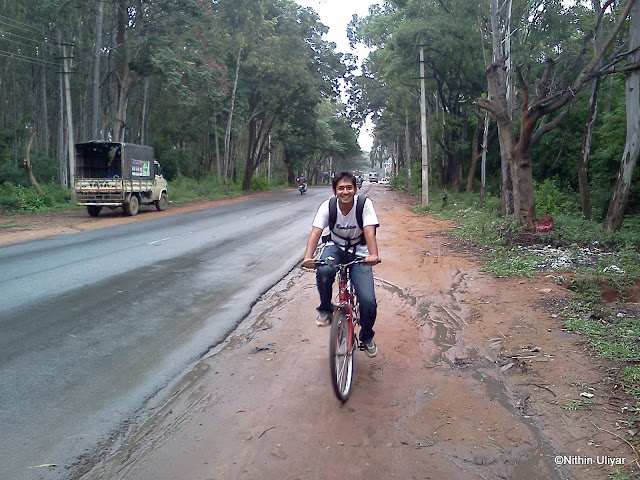 Anyway we left my home at around 6.20 am and reached our meeting point in in Outer Ring Road, where Ravi was waiting. From here we moved towards Bannerghatta road and early morning ride was good, well up untill we reached the Meenakshi Temple/Mall. There the true nature of what was in store for the remainder of the day dawned upon us. Shashi who had got a steel framed chinese bike (Trax) had now a completely detached pedal and this early in the morning we didn have the tools to fix it back in. Finally got hold of a Rickshaw guy with a toolbox and got it repaired. So on we moved , with me and Ravi(on his brand new Trek 3700) doing a good pace , but after sometime Shashi was nowhere in sight. After some 5-10 mins he would arrive and then we would start again , and as the day progressed this time gap would keep on increasing and  Shashi would arrive appearing to be more and more exhausted. It took a funny turn when both me and Ravi started to bet on the minutes in which Shashi would appear in the horizon :D . Now what made a reasonably fit Shashi to crawl like a crab and answer unanimously is his cycle. His steel frame cycle was not suitable for long distance cycling and I have no idea how he did it till the end , that too on his first outing :P, just shy of a century. So moral the day is : always research properly and be a bit more liberal with ur wallet if you have any plans of long distance biking :P. (No offence meant, Mr.Shashi :))
At one point I was chased very fiercely by a mad(might be sane too !!!!!) dog and I pedaled like hell creating an "American Flyers" moment :P. We reached Banneghatta and then moved towards Anekal. The entire route to Pearl Valley is tree lined so I suppose the same can be attempted in much brighter conditions too.
Just before Anekal there is a pretty huge lake named aptly as Doddakere and it was quite picturesome riding alongside this lake. Reached Pearl Valley aka Muthyalamaduvu at around 11 AM and went to the parking lot. There a father of 2 hot looking girls was greatly impressed when he saw that we had pedalled all the way from Blore and he was very friendly to us. The only dissappointment we had that we didnt capitalize on this  to get the daughters phone numbers :D. But anyway since we were 3 against 2 we decided to stick to the Bro Code  of "Bro's before Hoes" :D.
After parking the bikes when Ravi was starved of energy and was about to eat a couple of 5-stars chocs a brave monkey scared him by jumping on him and was rewarded with 2 5-star bar, dont know whether it knew how to open the outer cover :P. With just a 10 min descent we were at the base of falls. Well it can be said to be more of a trickle but we didnt have much expectations and our objective was more towards cycling than the final destination. There another family who talked to each other in perfect english arrived. They had a small kid and within no time the mother removed the diaper and threw it into the rocks. I was constantly swearing under my breath after this. If highly educated people cant follow the basic civic sense of not littering the public places what can we expect from the illitrates. :(.   Spent some 10 mins and we were back to the parking lot. Had breakfast cum lunch at the nearby KSTDC hotel which dishes out decent fare in the middle of nowhere. 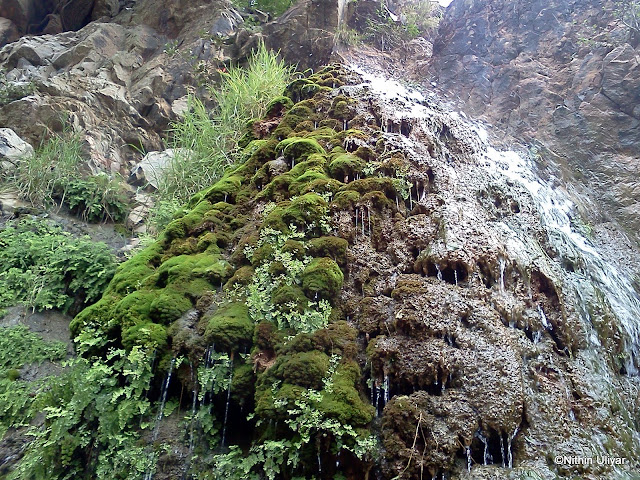 At around noon we were all set to return back to Blore and off we started. The initial journey was slow with Shashi severely exhausted with him mulling a plan of boarding a bus (preferably a volvo) and returning back. I tried towing Shashi in the calmer roads and it was much easier than I had expected it to be, but gave up after reaching the main highway since it was a bit risky. Shashi was very slow and at one point when we were a couple of kms before Bannerghatta got a call from him that he is ditching cycling and coming in bus or any other transport. So I and Ravi started and completed the last 25km within 1 hr and reached home at 3.20 pm. After this got info that Shashi had failed to get any transport and was cycling all the way, felt a bit guilty , but there was nothin I could do at that time. Finally Shashi reached his home at around 6 pm , completely exhausted and hopefully not hating cycling altogether. 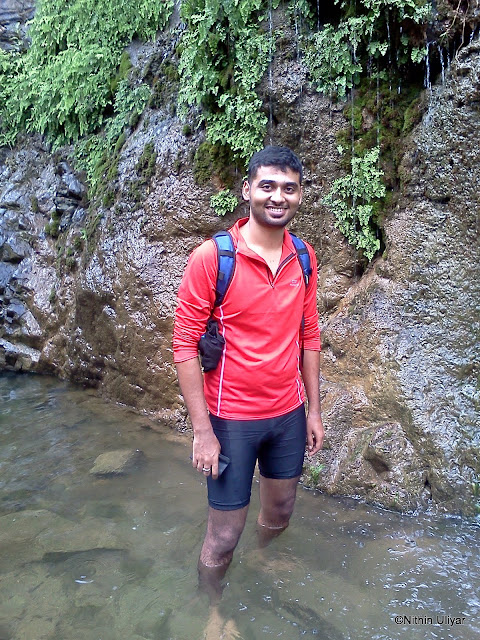 Overall for me it was a very relaxed ride except the last 1 hr where I pumped pretty good. The entire route is pretty flat with no killer climbs. For Shashi it was not that pearly and literally a return from hell :P.
Route Taken ->
Banashankari-Bannerghatta Road- Meenakshi Temple- Bannerghatta- Jigani - Anekal - (5kms) - Pearl Valley