Battleship : A Better Than Expected Fare 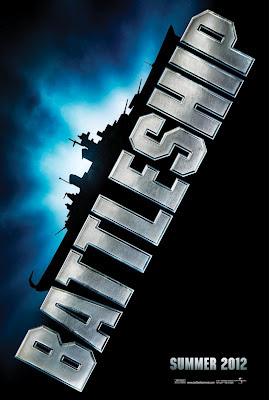 "From the makers of Transformers" and the first assumption I had was this is gonna be another run of the mill mindless action flick from the stables of Michael Bay. I was so sure of this fact that I didnt even bother to confirm it. On a saturday evening when I had nothing better to do after a energy sapping Corp Fin exam , couple of friends wanted to catch this movie , so I tagged along at the last moment and was mildly surprised with this movie, thinking that Michael Bay has improved from his last flick (the utterly mindless Transformers 2 & 3) until the moment the end credits start rolling , which gave away the director as some Peter Berg (Hancock), and I signed a big sense of relief....

Coming to the movie the plot was pretty decent with a group of alien ships(humanoid  race apparently) raiding the earth which looked like a invasion plan. But just 5 ships to conquer the entire earth, which were not bigger than any of the navy ships of the earthlings, and you know there is a serious plot hole (atleast they should have been the size of those in Independence Day , which set the benchmark for alien invasion movies ). A multinational group of navy ships is sent to intercept and explore it.  Anyway the aliens create a sort of force field around them so that none of the navy ships can enter it other than 3 navy destroyers which get trapped inside. So starts the cat and mouse game between the navy ships and the alien ships, a perfect adaptation of the actual grid based "Battleship" game, and I loved the way they adapted it.  At one instance they actually are looking at a grid based display and calling the shots trying to intercept the alien ships.

Another honorable mention is the soundtrack which was bombastic in the real sense bringing the full experience of watching this movie in the cinema. Special effects were also very good, with a lot of explosions, destruction, blazing canon's, sea battles keeping the action buffs rooted to their seats. But again when you have a WW-II era battleship thrown into the sea battle (which supposedly was not even started for the past 10 years) and you get distracted a bit with the plotholes in the script. I was like "WTH????" when the actual operators of the decommissioned WW-II era warship (the oldies of course) appear from nowhere to crew the ship !!!!! Even then the final climax was fitting and satisfying. Rihanna in her first apperance as an actor is a bit irritating sometimes. An awesome actor like Liam Neeson is completely wasted. Dont know what the heck was he doing in this movie. Brooklyn Decker (apparently she is a SI model :) ) plays the female lead and is an absolute eye-candy. Oh ya.. the lead actor Taylor Kitsch is OK.

A decent action movie with a few story line, few comic scenes thrown here and there. But what impressed the most was navy maneuvers they have adapted in this movie. Apparently this movie is released here in India almost a month before US for reasons unknown. Anyway a rating of 3.5/5 even after overlooking some major plot holes.

Posted by Nithin at 6:59 PM No comments:

(NOTE: My attempt at satire comedy. All the characters in this blog post are works of fiction, but if you might find a strong resemblance with any particular person living or dead, then give yourself a pat in the back and shut up.)

They say opposites attract, if that is the case all the not so fortunate people with respect to looks and bank account would have attracted the rich and the sexy, but is there any truth in that. The rules of this world are indeed strange. Anyway check out the profile of a guy, a very close friend of mine... Close enough that we are like 2 souls inside a  single body.

Age - 27
Height - 5 feet 11 inches
Build - Good enough to give Govinda a complex
Looks - Mirror Cracking (Phrase courtesy FB or was it Orkut ???!!!!.. who cares)
Hobbies - Like an endless borewell (especially those borewells in Bangalore)
Education - BE, MBA in progress from IIM-B .... (Woohoo... big bucks)
Job - Works for a Korean Tech Multinational...In short is made to work like a dog.
Hair - More than he can handle, after getting to know that this is one of a prime criteria for girls.
Relationship Status - Single since the past 27 summers and counting. (and winters ofcourse)

For an impressive profile as above, the last pointer stands out like a sour thumb. Naturally people including me assume my friend  to be surrounded by attractive females and being actively pursued by countless others. But sadly that is not the case. He has been a single since the day he was conceived in this world. So as a true friend I am trying to analyze what went wrong in his life. Some of the questions people usually ask are....

Is he gay ????....
This is the first question everyone asks when I describe his situation. And people especially stress on this point when I do mention the above comment of  "2 souls single body" crap. But I assure you that is not the case, he is 100% straight and so am I, to set matters straight. There is literally nothing in the closet for him to come out with apart from a pair of stinking socks, which I presume was mine a long time ago.

Did he forget to spray his body a with truck-load of  "Axe-effect" or "bed-wet" ..oh sorry "set-wet""???!!!!!....
Answer is Nope.... He has been a dedicated follower of all these thesis and effects since those ideas were  broadcast on prime-time television to shock women activists and to the enjoyment of pubescent boys like my friend. Some of these boys growing up in a conservative South Indian family, were made to cover their eyes, while others were downright threatened by their parents for ogling at these images with an open mouth. But my friend was one of the few who understood the underlying hidden truth, "Axe डालोगे थो..... Even Angels Fall !!!!!!"

Is his outward presentation a problem ???!!!!
Well as a matter of fact "hardly". He is one of those maniacs who shaves twice a day, once in the morning and once before going bed, I guess he  somehow got this confused with brushing his teeth, which he still does only once in the morning. Always trimmed hair, ie military cut hence exposing those big brains 24x7, man this guy is just short of being a total show-off.  His dressing style is top notch and this guy even wears pink to show his feminine side. Easily the heights of desperation.

Did he not try to patasify any girl ???!!!!!
Well not really. His policy in life is to be like a street lamp, attracting all the mosquitoes and bugs in its own right. Further he imagines himself to be a peacock, with all those colorful wings and dancing in front of females in order to attract them. Just imagining this scene gave me 3 sleepless nights. Awwwwhhh !!!! the humanity.

Doesnt he "like" the FB posts posted by attractive females ???!!!!!
He religiously does this. So much so that he doesnt even look at the actual posts before liking them. He even liked a post by a girl which was "Lost my beloved Bow-Bow today..Sad. Sad Sad :(:( " and he was promptly removed from the friend list by that girl. Even after this incident he has never learned, just like Bow-Bow 's tail. May the soul of Bow-Bow rest in peace.

Is he shy ???....
Not really..He is one who gives everyone his piece of his mind when the situation requires. But unfortunately when he comes face to face with an attractive girl his knees go weak and he starts acting like a mentally challenged person. People start hearing only monosyllables during that time, similar to the signals generated by a Morse code machine. Girls start feeling pity and all the initial attraction they had towards him goes down the drain. Hmmm, atleast some progress. Might be he has to improve on this point.

Finally people might ask why I am  taking so much pain to solve his problem. Well frankly speaking I have a hidden motive in this. Now imagine all the expenditure my friend might have to endure to maintain his high maintenance girlfriend, movies , restaurant, petrol expenses and so forth . Imagine if they get married they would have to buy tons of gold,  marriage halls rents, food preparation costs and million other things. Imagine if they had a baby and the expenditure they would have to endure to put that kid into school and then higher studies. Now imagine that kid finds someone and starts his own family... The loop is infinite. And if you were not sleeping in your economy classes you would have listened that increase in expenditure/consumption would increase the GDP of the country. And increasing my countries GDP is what this is about. Hence I am doing all this for my country and not my friend. Mission 2050 and for this my friend is the first stepping stone.. WOOHAAHAHAHAHA (evil laugh if u didn get it).. I am a genius.

Now imagine what would happen if my friend stays single for life......

P.S. > I know d ending sucks. but couldnt think of a good one. Suggestions are welcome :P
Posted by Nithin at 4:44 PM 15 comments: