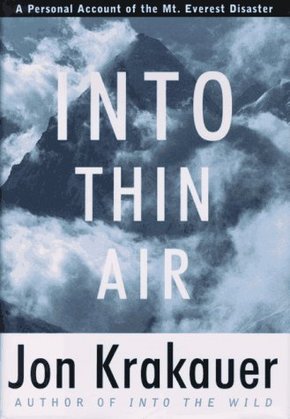 One of the more disturbing books I have come across,  not that it has extreme violence or such but because this is true life story of the 1996 Mt. Everest disaster which whipped out 8 people from the face of the earth within a single day and that too in the worst possible manner, a slow and painful death. The horror of getting stuck in a blizzard that high in the mountain where you have no strength to move towards safety, nor can you expect someone to rescue you (no helicopter rescues at that height) but watch your hands and limbs getting slowly frostbitten is something which I dont want even in my worst nightmare. The narrator Jon Krakanuer, is a part of a phenomenon in Mt. Everest where a person with a very limited or almost negligible climbing experience is pushed to the top of the world by some very experienced guides(Rob Hall, Andrew Harris, Scott Fischer etc) and off course at a very high premium. The level of commercialization was so much as , that there were nearly 20-30 climbers attempting Mt.Everest peak on a single day and entire narrow route was completely jampacked like the streets of any shanty town . The complete commercialization of Mt. Everest and this is what the author is citing as the main reason for such a high death count in a single day, other than fate and bad luck. It is a known fact that when people go out exploring the mountains and wilderness there is a certain amount of risk involved, and one should be utmost careful since any step could be his last and after reading this any person who is regular to the mountains be it a weekend trekker or a person undergoing a major expedition will be equally shaken up.
Coming to the book the author has done a good build-up initially of the history of Mt. Everest, the time since people starting noticing it and even attempting to scale it. So many distinguished climbers came so close to climbing it such as George Mallory as early as in year 1924, almost 30 years before Edmund Hillary and Tenzing Norgay. Death is not an issue for those seeking eternal glory :). From this detailed background reading the author shifts the focus to their expedition, the buildup to the ascent of the peak and an analysis of where it actually went wrong. Also I loved one quote where he had beautifully illustrated the final ascent of the peak, whereby he explains that a person couldn't possibly enjoy the moment of actually scaled the peak thanks to the high altitude and the thinness of air. All a person would want to is to actually touch the place and get back down as fast as possible and in the end just earning the boasting rights for the rest of his life.
Apart from the narrator's focus on the climbers from the southern side(from Nepal) , there is a chapter about 3 Indian climbers who had tried to scale from the northern(Tibet) side in a true Alpine style expedition (a team carries all its supplies and with no porters) during the same time and met with their death when they got stuck up in the blizzard. Nevertheless after the blizzard these 3 Indians where passed by a Japanese expedition, who found them to be barely alive, with a couple of them suspended from their climbing ropes and severely frost bitten, and quite shockingly the members of the Japanese expedition did nothing to ease their pain, not even a drop of water was exchanged. The Japanese team just pushed on towards the peak and were in fact successful in their attempt. This raises a question of how narrow-minded  can one's aim of reaching the top get, so as to not even consider a human life????. Agreed , the chances of a rescuing them at that altitude was close to impossible , but at least not to comfort a person with death knocking on his doors is plain stone-heartedness.
But again when we try to compare the end results of the 2 groups , one of the Japanese climbers and the other group consisting of climbers like Rob Hall and Andrew Harris who had to give up their life in order to save the others , then the decision taken by the Japanese seemed rational, where Darwin's theory "Survival Of The Fittest" comes squashing all other principles. In the wilderness the principle of animals always comes into practise, and not that of humans.  This a good read and makes us realize yet again that humans dont really own this planet called "EARTH".
Posted by Nithin at 3:23 PM No comments:

Email ThisBlogThis!Share to TwitterShare to FacebookShare to Pinterest
Labels: Books 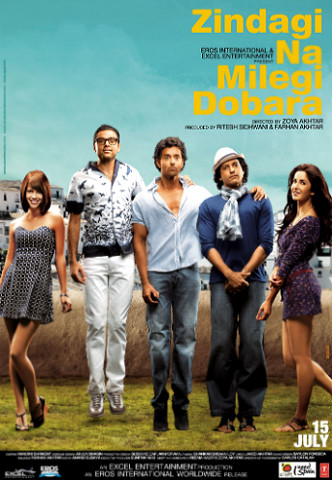 The first feel of this movie's title and one starts to wonder whether this is a mediocre title of a still more mediocre movie (a flashback of Hindi movie titles in the 80's and 90's :P ).But that couldn't have been more wrong. This movie is a refreshing change from the normal staple of movies bollywood churns out like the over the top and mindless action movies(read Dabangg) or silly comedy movies(read Golmal Series). And easily this movie makes to the best ones of the year list (havnt watched Delhi Belly yet :( , so leaving tat out from the competition  for the time being).
3 lead actors and easily the first comparison is drawn towards the evergreen DCH(Dil Chahta Hai) and considering that this is directed by Zoya Akhtar (younger sister of Farhan) ZNMD can easily be termed as the younger sibling of DCH. While DCH focused more on friendship,relations & love , this movie expands the envelope including stuff like meaning of life, in addition to the subjects of love,relations and friendship already presented in the previous movie. The main message that ZNMD tries to convey is "live life to the fullest", every second, hour,day and year of it. This is something which as far as I know never been tried in Hindi cinema.
Movie starts with Kabir(Abhay Deol) getting married to Natasha (Kalki) within 6 months. So it was time for 3 friends (3 Musketeers) to get together and go for a bachelor trip, a 3 week road trip in Spain where they vow to do some stuff never having been tried by them before. The casting of the other 2 friends is put forth by Arjun (Hrithik), a total workaholic person whose life starts and ends with money and Imran (Farhan) in search of his biological father. This road trip takes them to various high and low points of life and how they come out of it becoming a better person. Of course there are a lot of laughs and gigs enroute and which at times I found to be extremely hilarious, but this is not from any angle bollywoods answer to "The Hangover", but much better.
The way in which Spain is projected in this movie is absolutely jaw dropping, simply beautiful and hence increasing a count in my endless wish lists :P. Katrina Kaif as the sexy scuba diving instructor fills up the glam quotient and one cant simply take eyes off her in the movie. Farhan Akthar in his new avatar as the funny man  is real hilarious.
After watching this movie , there was thought provoking question in my mind. "Is it really possible to live one's life to fullest without money ???" and answer to that at least in my case is a big NO. I have to slog at work trying to move up the ladder so that I have enough monetary power to enjoy life, but at the same time it seems like a paradox of life , each chasing the other, and the best solution is strike the perfect balance and which believe me, even god would be happy to strike.
Overall I would rate the movie as 4.25 out of 5 and a must watch for a majority of Indians for whom work is everything. "Work hard and Party harder" should be the motto henceforth since "Zindagi Na Milegi Dobara" .(a very cliched dialogue indeed :P)
Posted by Nithin at 8:03 PM 2 comments: