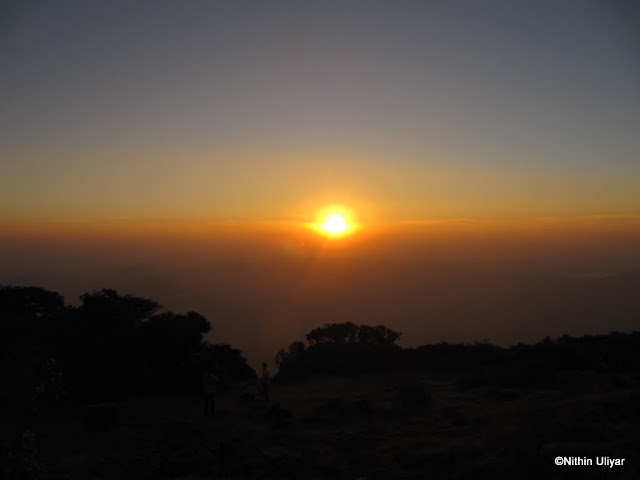 With so many treks yet to be explored in India, especially the southern part of it which can be accessed over the weekend, I never imagined having a repeat trek within a span of 2.5 years. But many things fell into place and I was going for my second attempt of Kumaraparvatha peak. But atleast some of the factors where different this time around (1st KP trek)
1. It was a winter trek against the monsoon trek the previous time.
2. Trek path was reversed. This time it was Kukke to Somvarpet. 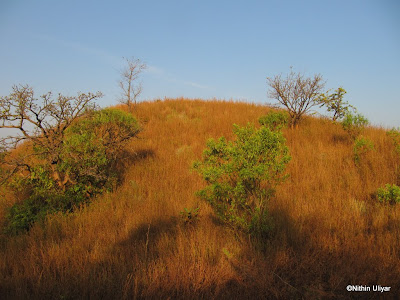 With a free weekend and SK insisting on his first trek to KP, we finally decided the destination. Booked the onward journey tickets for 5 of us (Shashi(also on his 2nd KP trek), SK, Ashwin, Praveen and Myself.) for the 11th Jan 9.30 pm Rajahamsa bus leaving to Kukke Subramanya. Since we had decided quite late, we were to adorn the last few rows of the bus, which resulted in disturbed sleep later on as the bus negotiated the ghats. Reached Kukke @ 4.50am which was shocking since even the KSRTC website predicts reaching the destination no sooner than 5.30am , that too after leaving Blore late due to the festival rush and the long weekend.


With not even a hint of sunrise anytime soon, we roamed around and found that Neo Mysore Cafe was already opened and serving at this unearthly hour. We were the first batch of customers to have breakfast for the day (idli's and uppittu) and we left the town at around 5.30 am to traverse the 1.5kms of tarred roads to the beginning of the trail, expecting we might have some light by the time we reach it. With the first signs of sunlight we hit the trail at around 6.15am and hence started the trek. Surprisingly there were close to 4 other groups beginning the trek along with us and later on we got to know that close to 70 people were attempting it from Kukke side on the same day !!!!!!!!. But thankfully only a third of that figure reached the peak for camping. 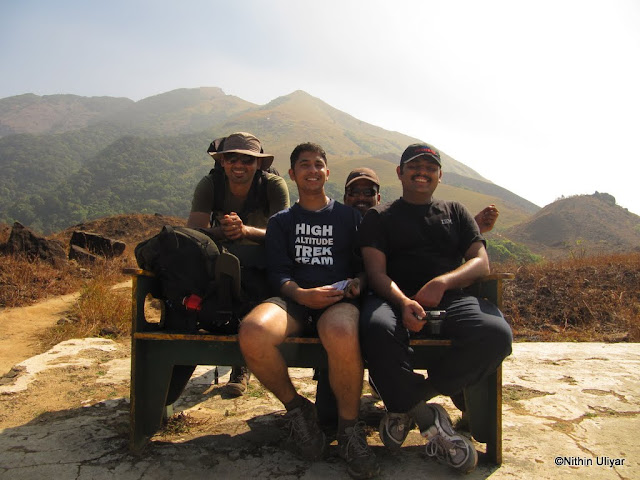 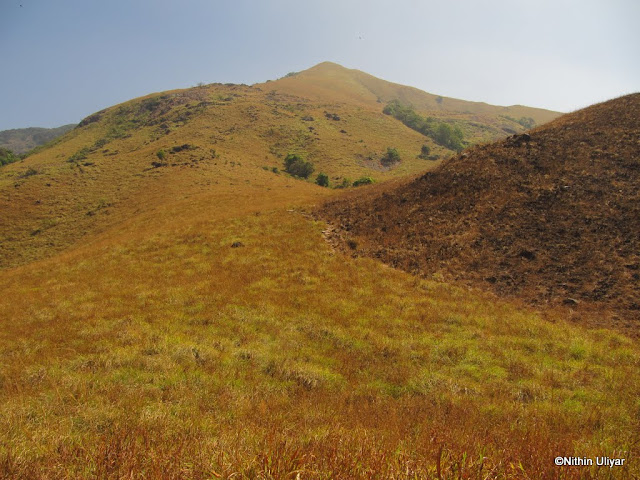 Early morning trekking has its own charm. A dead calm forest suddenly springs into life within the first rays of sunlight. Birds, insects and what not chirping away to glory. Was a very soothing music to the ears :). Since this time around there was no monsoons, didn't encounter even a single leech for the entire duration of the trek. The plan for this day was to reach Bhattara mane for lunch(@ around 11am) and reach peak by  5.30 pm. But things were to be moved beyond expectations for the next 2 days. We covered the first 6 kms of the trek through the dense jungle and 1km of grasslands and reached Bhattara Mane's house at exactly 9am :P. Just before reaching Bhattara mane one gets to witness all the 3 prominent peaks one has to conquer(the first unknown peak, Sheshaparavatha and finally KP) .We were not sure at what time lunch would be served since we didn't want to loose time loitering around this place. The next section would be through sun baked grasslands and Ashwin had some difficulties in the climb. But surprisingly they informed us that it would be ready @9.45am :P. Hence it was a no-brainer and we had some awesome spiced buttermilk followed by the simple lunch of rice, sambhar and pickle (80/head). 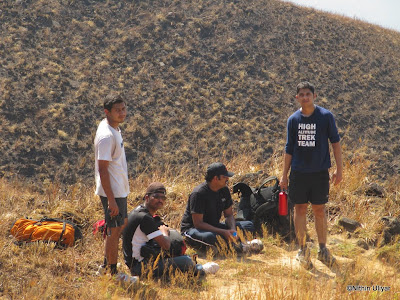 Left the place at around 10.30 , moved towards the forest check-post , joined along with a IISc group of 3 in order to bring down the costs (they issued entry receipt for 5 people for a grp of 8 with 200/head). From here starts the most challenging part of the trek, in fact the only challenging part. Open grasslands , with no shade and steep gradients, one has to conquer 2 peaks before attempting the final peak of KP. Here the progress was slow. In these grasslands the only watering point available is @Kallu Mantapa which is almost 2.5-3kms from Bhatta's house. Reached the place, rested in the shade of the mantap, refilled our bottles and it was time to move on. Many first timers easily get decepted into believing that the first peak is the final destination of KP. With the other 2 peaks  invisible they see that peak as the highest in the vicinity. Once we climb up our first "false" peak one gets to view the awesome drops from the sides of Sheshaparvatha. Close of 1000 ft vertical drops !!!!!! . Also from the 2nd peak there is stone projecting into the oblivion, where I had got a snap taken. Even after 2.5 yrs I still hadn't got the guts to sit on the edge of the rock , but Shashi was so interested to have a snap taken sitting on the edge. This was not surprising since his mobile wallpaper is of a person sitting on the edge of Preikestolen in Norway and he looked desperate to replace that with his own snap :P. 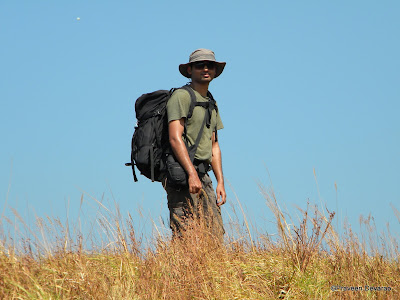 After it was a descent into dense forest followed by a flat steep rock face. The place where we had struggled to descent during the monsoons. But now it was not much of a challenge. From here it was 200m climb to the top and we reached the place in around 3.15pm, taking close to 9hrs. Got a sweet cozy spot , covered by vegetation in 2 directions and rested in the shade for the next 2 hrs. At around 5 we pitched our tents and it was time for some sunset views. I was expecting some good views this time around since the sky was super clear. But unfortunately the sunset (as well as the sunrise) was blocked by a layer of clouds in the horizon. Hence we didn't get the perfect sunset and even-then it was decent. Returned back to our camps, started the fire to cook our dinner of noodles. By nightfall the temperature had dipped and we were to witness a star studded night sky. Were inside our tents by 8pm. 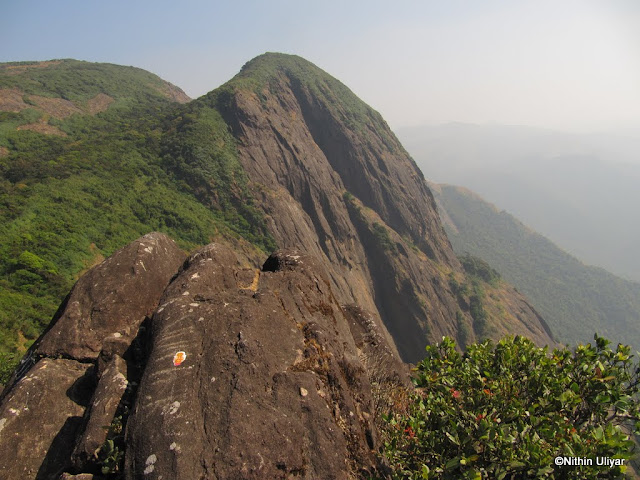 By night a huge group came and camped next to our tents. They were without tents or sleeping bags and entire night was filled by their shouting, singing and noise. Even-though this was disturbing to our cozy sleep inside the warm tents with our sleeping bags on, somehow I didn't get angry with them.... I understood their pain of camping in the open in the peak of winter. Next day was woken up @ 6.10 am by Praveen to catch the sunrise. It was freezing outside with considerable wind chill. Braving the cold with just the shorts and a sweat-jacket went outside to catch the sunrise. But sadly the horizon was blocked by a layer of clouds and the sunrise we witnessed was decent but not spectacular. Somehow I felt the views we got during the monsoons was miles ahead of what we were getting in winter. 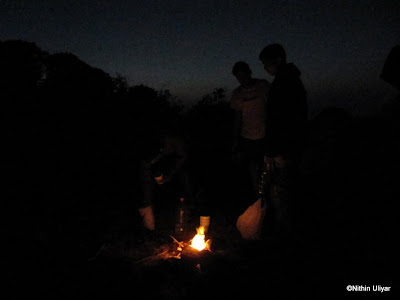 Packed the tents @ around 7.30am and it was time to descend via the Somvarpet side. Since we wanted to catch the 2.30pm Somvarpet to Blore Volvo we decided to leave this early. Directly entered the forests and descent was event-less apart from the 3 steep rock faces, but it being dry our shoes were able to get maximum grip and we were able to descent almost walking down vertically. We covered the 7 kms to Bidahalli APC in around 2 hrs, much earlier than we had anticipated. There was no one @APC at this time, hence we waited for some time (Gangnam Style dancing :P) before the forest guards arrived. We booked a jeep which would come all the way from Somvarpet and meanwhile we booked the 2.30 pm volvo bus tickets. Since we had close to 1hr to kill we went to the rivulet near the APC , had a bath in the freezing waters of the forest. SK had a fall into water with all his gear and luggage , this was after he got overconfident crossing a severely dilapidated hanging bridge, much to the shock of forest guards who said it was under maintenance :P. The jeep arrived and it was stuffed with 11 trekkers, 1 driver and 1 forest officer. The driver charges 1200 for 10 people and anything above it is extra. 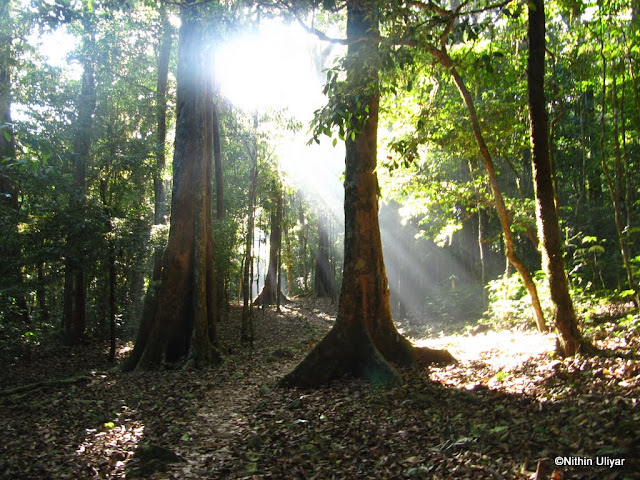 Reached Somvarpet and the driver recommended Hotel Surabhi, which was bad according to my tastes. Spent close to 1.5 hrs in the bus stand and at 2.30 the Volvo bus arrived. This bus was facing some technical difficulties hence the drive was slow. Reached Blore at around 8pm and I directly took a bus to my home at Kengeri. Overall I felt it was more thrilling to trek to KP in monsoons for better views, less crowd and leech infested pathways(the absence of which u feel something is amiss :P ) 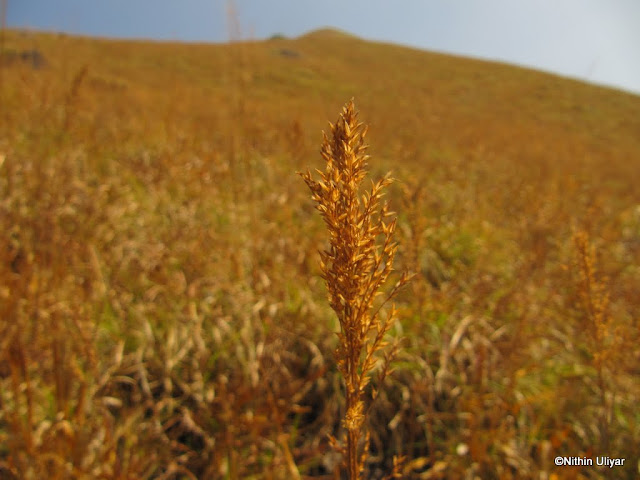