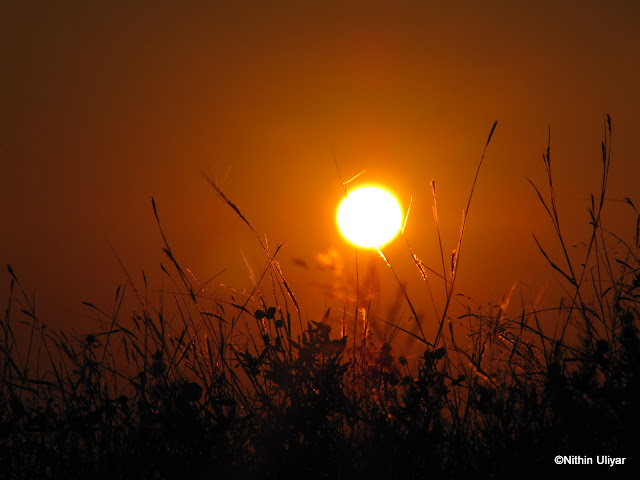 Year end and trekking usually dont go hand in hand for me. The major reason for a trek is to enjoy the solitude and spending quality time with the nature. I wouldn't prefer to be shocked by 200 chatterboxes on top of the peak which is usually the case with popular trekking spots at this time of the year. Hence we decided to go for some lesser known trekking destinations and Ettina Bhuja was the first in that list. The name means "Oxes Shoulder" in kannada, taking into consideration the obvious shape of the peak.

After an episode of postponing ,dropouts, cancellation of tickets and frustration,  the dates were finally decided to be 25, 26 Dec. Total number of people were just 5 (Prasanna, Vineeth, Nutan(his first ever trek), Sai and Myself). Due to the mad rush on the night of 24th Dec for people to get to their hometown we could only book our seats in Karnataka Sarige buses and that too in the row towards the rear, destination being Dharmastala. Majestic was pretty much jampacked. The bus arrived amid lot of confusion and left Majestic only by 11.50 pm, a good 1 hr delay. The seats were super crammed and congested for my frame. Spent the night with very less sleep except the Shirdi Ghats(In pathetic condition right now) where I slept like a baby... (craddle rocking effect maybe :P)

Landed in a small town Kokkada at 7.30 am,  a good 16 kms before Dharmastala. This was informed by the De Facto contact point for any treks around these regions, Gopu Gokhale . Hired a jeep to Shishila village the last point for any provisions and the house of Mr. Gokhale. When we entered Gokhale's house premises where a little worried with the sight of nearly 50 trekkers reading themselves for the trek, but our doubts where put to rest when we came to know very few of them where moving in our direction with a majority of them heading to Amethikal and Ombatthu Gudda(the alternate and easier route compared to Gundya).

Completed our morning business at the trekker friendly premises of Gokhale. Had our breakfast of idlis and where provided with packed lunch by Mrs.Gokhale. At this time our guide for the trek Lingappa arrived and we started from Shishila at around 10 am. The distance between Shishila and base point of Ettina Bhuja trek is around 5 km through a motorable path. Of which we walked 3 kms and got a "paid lift" in a jeep for the remaining 2 kms. The walk on the motorable-tarred road was pretty much a walk in the park and within a few minutes we started to get the first view of the Ettina Bhuja peak , and the ascent seemed intimidating. Eventhough the height of the peak is just 1299 MSL , the starting point is at much much lower point and degree of ascent is what makes trek somewhat an effort. 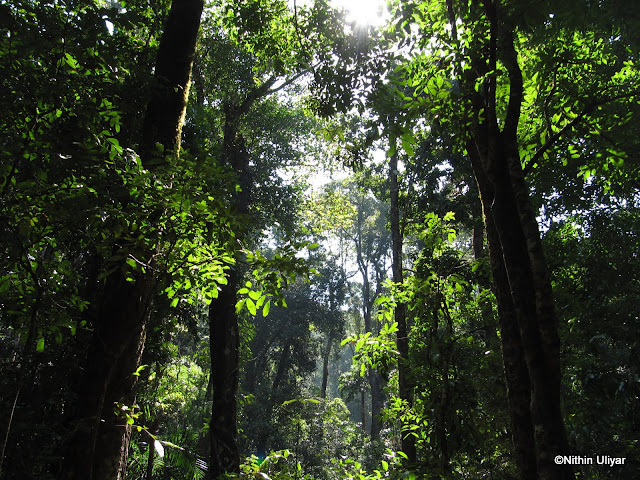 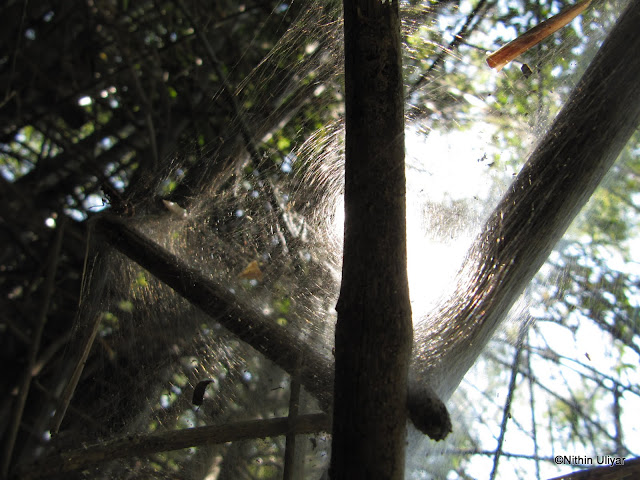 Soon we exited the road and entered the dry shola forests, lots of dry leaves are strewn along the entire path, and hence it is advisable to get a guide along since it can be quite confusing. There is a proposal to build a road all the way to Ettina Bhuja hence there is kuccha road in the initial part of the trek, but thanks to the efforts of Forest Department and environmentalists this has been stalled. Soon we came across a river crossing. This river is around 100 feet wide and shallowest point around 3 feet deep... So not sure if the same can be crossed in the monsoons. Removing our shoes and folding up our pants we started crossing this remote , untouched, crystal clear water of this river. The water was ice cold and within no time we had decided our dip point while returning. 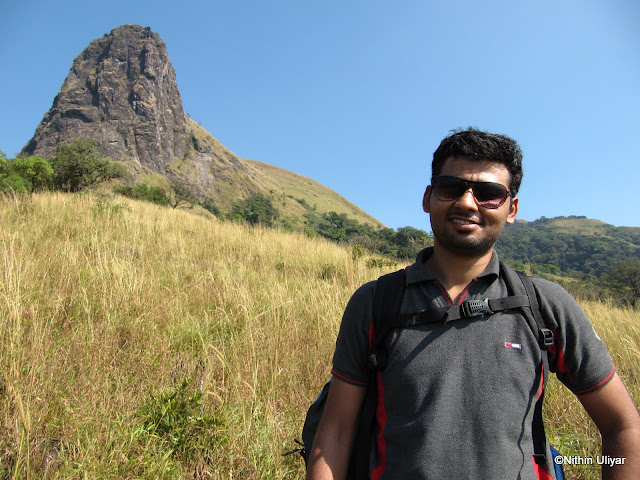 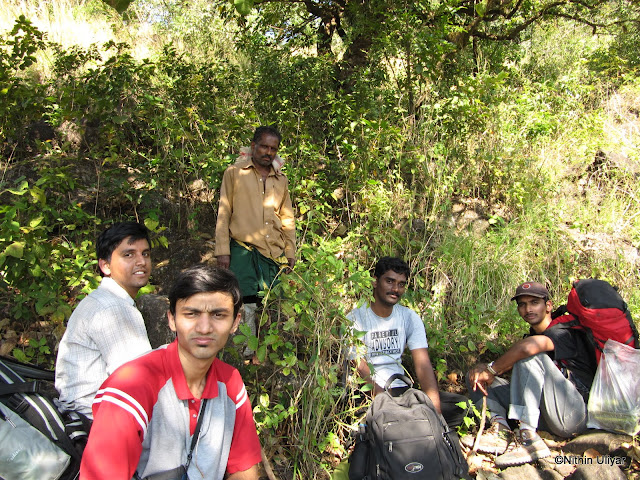 After the river crossing for a good couple of kms the river accompanies the trek route giving an awesome gurgling sound along with the chirping of the birds and other forest noises which gives an impression of a forest which is truly alive. The initial part of the trek is canopied by trees so even when the sun was out and temperatures started souring , we didnt feel any discomfort. Every now and then we used to get an opening and would get a view of the peak closing by. By noon we decided to stop by and have our lunch of chapathi's and cabbage sabji and they were delicious. Along the way we came across one more group climbing and they were just struggling with the climb. Was having doubts whether they will make it to the peak , but they finally made it , a good 1.5hrs behind us. 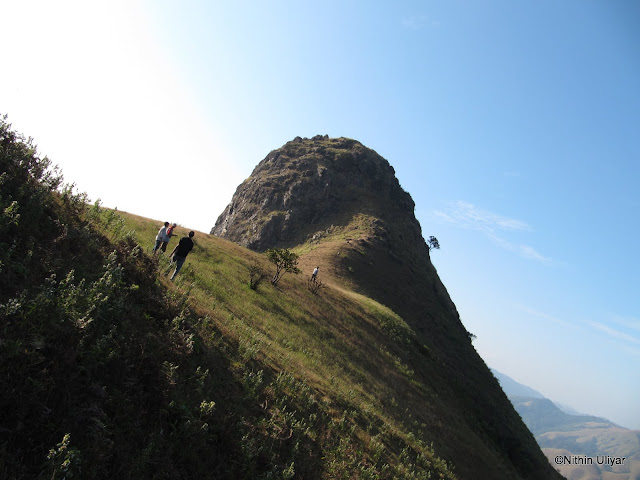 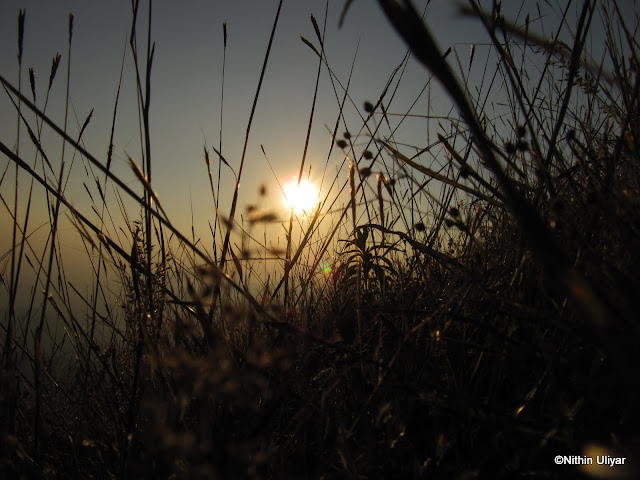 Also in our group initially Sai had some problems, but soon he got used to it and kept his pace. Towards the end Prasanna lost his steam and he started moving very slowly. As we moved closer and closer to peak, we entered a region fully infested with elephants grass almost 6 feet tall and totally swallowing us up whole. These dried up grass and the peak in background was a scene to witness. Also by this time we were pretty much below the hump and had to take a circuitous route to reach the peak avoiding the nearly 500ft vertical climb which I suppose Bear Grylls too wouldnt dare to attempt :P. 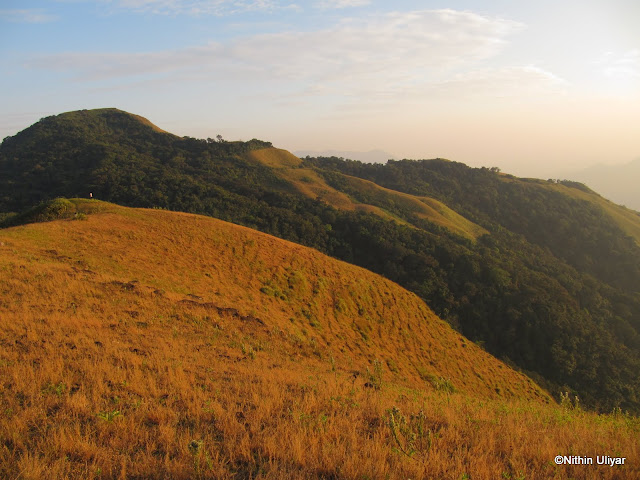 Finally at around 3.45 pm we reached the camp ground a good 20 mins to the peak, taking almost 5 hours to reach this spot. Infact this can be done much faster by seasoned trekkers, but what were we supposed to do at the peak under the afternoon sun (the top is totally exposed to the elements of nature) , hence we took our own time. Rested a bit near the camp site waiting for the sun to be a bit more bearable. At around 5 pm we started our final assault towards the peak minus our backpacks and tents and within no time reached the peak. The final section might seem like a bit tricky and steep , but again for a seasoned trekker it is just a piece of cake. In the last section both Sai and Nutan had a hard time dealing with the drops on either sides and literally crawled on their fours. Difficulty wise of this trek, I would place it somewhere between easy and moderate. 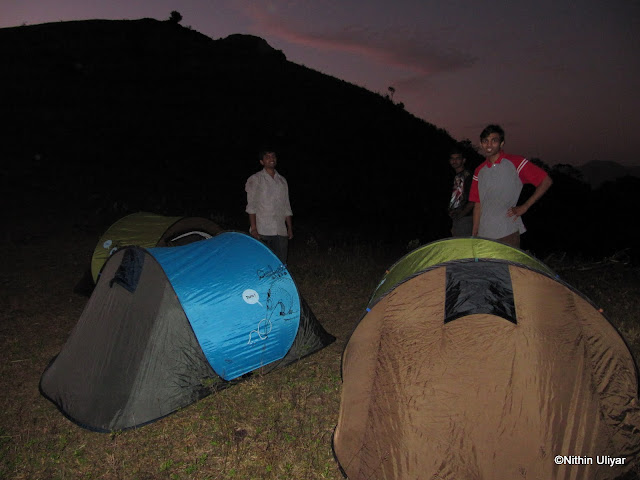 The views from the peak is truly enchanting. We can get visuals of lots of peaks of the Charmadi ghats including the Amethikal, Jain Gudda and even Ombatthu Gudda at a considerable distance. The view of Amethikal greatly reminded me of the trek to that peak nearly 3 years back(my first serious trek) when we were lost with no water and had come across a unclimbable steep section and could proceed no further. At that time the views of Ettina Bhuja Peak was the one which had kept us company for the entire time. And 3 years later it is the opposite, but sans the "getting lost" and "without water".


The sun had started to set and views of the setting ball of fire without any clouds to hinder gave some awesome views. After the sunset,  went down to our camp site and started the bonfire and cooked our dinner for the night.  "Maggi Noodles" under the starry sky :P.  After killing time with UNO cards we were into our sleeping bags at around 9 pm and slept for 9 hrs straight. 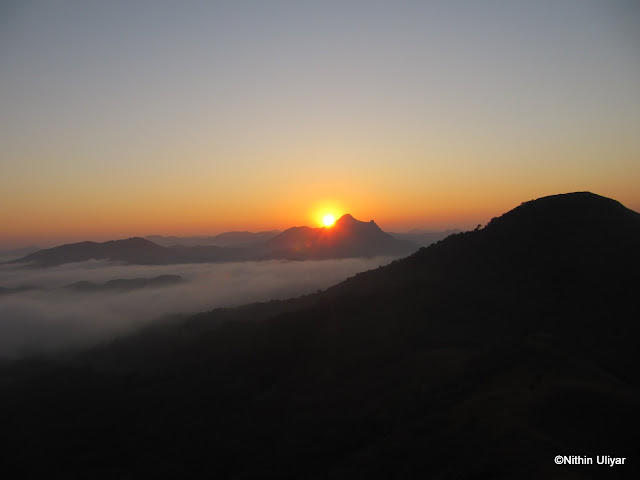 Was woken up Nutan at around 6pm all excited to witness his first sunrise among the mountains. Gathering up my thoughts went outside to witness the miracle of nature. After having some doubts regarding the direction of the sun-rise decided to climb the peak for a better view. No one else were interested in that proposition and I went all alone. As was climbing caught sight of the first rays of the run rising from behind a mountain and within no time we were witnessing an awesome sunrise. There was a layer of mist at a much lower level and the sunrise made them appear as if they were on fire. Truly an awesome sight to witness.

After the sunrise we returned back to our base-camp, had a breakfast of Bread and Jam, gathered our belongings and started the return journey. Between there is a small stream just about 10 mins from the basecamp which is a source of water and I doubt whether that still flows in summer considering its size.


In one section of trail which was pretty much damped were attacked by leeches. Nearly 4 of the bloodsuckers had managed to climb onto my leg , but a stop to tie up my shoe lace revealed the sneak attack and quickly removed them, else would have been a bloodbath considering that we were 100% sure of no leeches in this season and I would never have bothered to check :P. Another minor incident during the descent was when Prasanna "accidentally" hit Vineeth with his stick and then ensuing bloodbath :P. This happened when we had stopped to collect gooseberry's which dot these landscapes and pretty delicious when eaten with salt.


Since the entire path is strewn with dry leaves the descent was loaded with lot of slips and falls. I too had a lot of slips but thanks to the bamboo stick was able to keep my balance and avoid any falls. Finally at around 12 noon we reached back to the river and decided to take a dip. Unfortunately my clean record was broken when I had a fall and this happened after the "Do or Die" bamboo stick gave in under my weight :D. 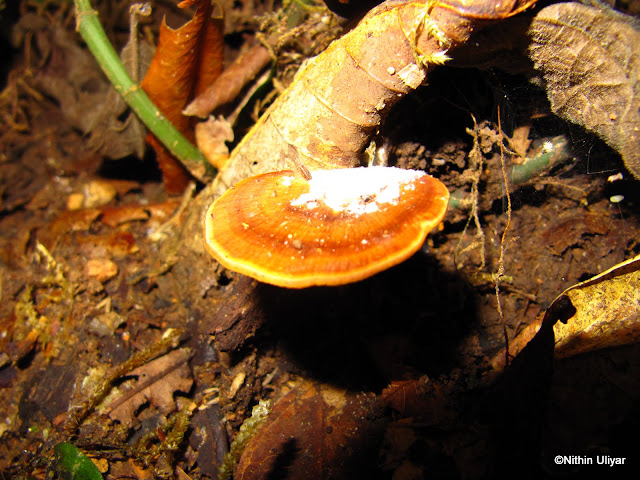 Spent nearly 45 mins in the cold waters of the river. Our guide showed us a good spot where there were a lot of small rapids due to the boulders. So we just went and sat on the boulders and enjoyed the "jacuzzi" effect of the nature. After the dip reached the main road again and reached Lingappa's house. From here we caught an auto to Shishila. Were greeted by spiced buttermilk at Gokhale house and we had had the second bath of the day and a lip-smacking lunch. 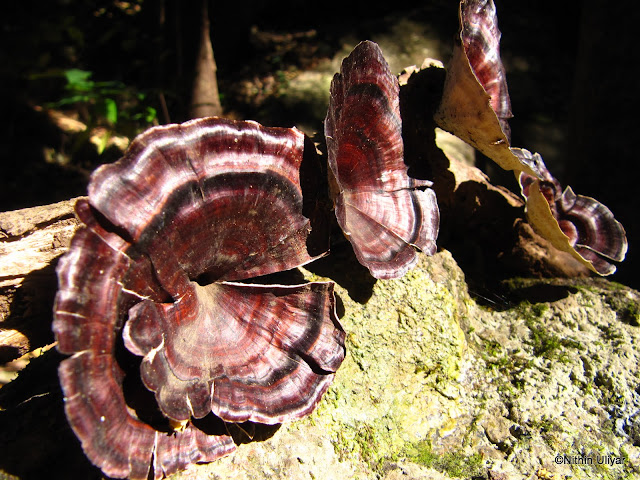 Finally at 4 pm we caught a bus to Kokkada and from there we took Jeep which was filled to the brim. (18 adults and 1 kid). The driver was driving with half his body out of the jeep and with so many people in that single vehichle I think my body would have surely collapsed under that pressure if my body was any softer :P. Reached Dharmastala at around 6 pm and went directly to the temple after depositing our luggage at the luggage counter. Here we took nearly 2 hrs to get darshan which was more frustrating than any trek I have undertaken. Imagine taking 2 hrs to traverse 300 metres. At around 9pm we moved to the bus stand but literally no one knew where the new bus stand was. So strolling for some time we managed to reach it which is around 1km from the temple. This time we had got Rajahamsa seats so slept the night without any problems right till we reached Bangalore.

As I got down at Majestic was witness to a strange sight. There were 2 Indians who were urinating up against the wall and seeing this a caucasian white male having a huge bag-back decided to do the same. Was totally stumped, didnt know whether to smile or frown. Probably he had heard a phrase "when in rome do as the romans do" :P. Finally the memorable trek came to an end. Even-though it was not as tough as we expected,  the views we got were superb. A fitting finale for the year 2010, which is and probably will be my best travelled year for a long time to come. 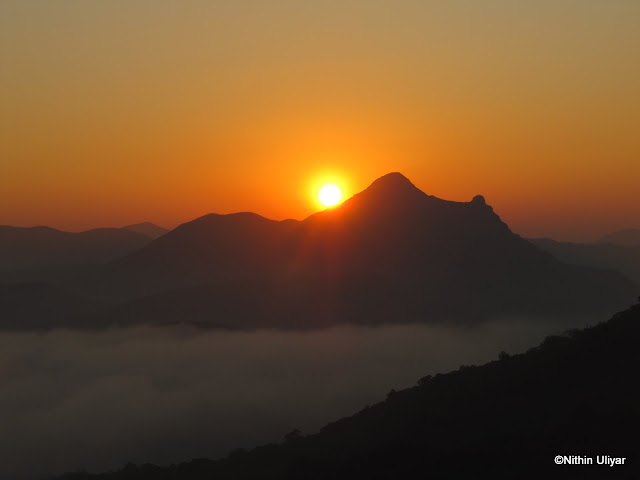