Why India needs a Mangalayaan (or even Chandrayaan 2) ????

In January 2013 there was an announcement that ISRO would undertake a mission to mars, probably in the month of November. If successful India will become the 5th country after US, Russia, Europe and Japan who have had a successful Mars mission. Magalayaan, as India's Mars mission has been christened, will look for signs of life and reasons why the red planet lost its atmosphere. But with this news, the critics of Mangalayaan kickoff their arguments with the following hard facts :

"Half of India's children are starving and on an average 3,000 children die from malnutrition every day."


Read more here: http://www.kansascity.com/2013/05/24/4253999/india-buys-helicopters-while-its.html#storylink=cpy
"The World Bank report which declares that one-third of the world’s desperately poor people lived in India,  which amounts to 400 million people who survive on less than $1.25 a day."

Eventhough I do not contest the above stark ground realities of our country, I am compelled to comment when they conclude that it is a total  mindless cause of spending close to 500 crores for such kind of mission, whereas the same money can be used for the betterment of the Indian society.

But my question to those critics is whether 500 crores even a significant amount when you compare it against the gigantic problems faced by the country.  It is a decimal point when you compare it to the actual spending of the Indian government every year (considering for the fact that Mars mission cost is spread across 2 or more years ). It precisely comes around to 0.3% of the total govt spending's every year. Miniscule when considering the burden the government will endure for fuel subsidies or even the recently passed food security bill. Further consider if the same amount was allocated for some development purpose, the total corruption involved and the actual money which would benefit the target audience. Hence this amount is actually insignificant when you consider the scale of the problems faced by the country.

They say even if its a decimal point , why to waste it on something from which you get no returns. For that I love to disagree and I believe those returns can be divided into 2 major pointers, one tangible and another intangible :

Being a country which foresees itself to be developed country in the future, technology is one of the strongest and the fastest stallion to reach that destination. The r&d  for such a program will not be restricted to the space and defense applications, but it usually spills over to civilian technologies too. It is not a matter of surprise that US of A's technology might had its seed sown during the WW II, with one of the finest examples being nuclear technology. In Indian context you have the ready to eat technology which has come out Defence Food and Research Labs. India as a country never really had an industrial revolution thanks to the British occupation which literally ruined the local manufacturing industry by flooding Indian markets with the factory made British goods. Hence we cant really afford to miss the next step in technology revolution which might be exploiting resources of other planets. We have to become self sufficient and not reliant on other countries to provide us the resources at a jacked up price, which might throw us back by a few centuries again. Further our space budget is very miniscule when compared to those of the developed world, hence making it one of the most efficient space organizations around. ISRO is kinda like The Toyota Of the Space Organizations :P.

The second major pointer is that of pride. Imagine being one of the best in the world which might instill a sense of second to none attitude among us Indians. I recall the story of America's Moon Mission of 1969. Prior to this USSR was much ahead of US in terms of space technology having been the first to send a man made satellite, first animal in space, first human in space. But President Kennedy inspired the entire nation to beat the Russians at their own game and we can say the rest of it is history. I believe such an impossible task is the need of the hour for the Indians, to have that feeling of pride for the country. Some say that corruption which is one of biggest problems facing the nation can be solved by bringing in stringent laws,bills and other external forces, but somehow I feel this can be solved internally by instilling a sense of pride and patriotism among the citizens. And such missions to the heavenly bodies enables us to take baby steps towards that direction.

In short we have to capitalize on our strengths which are programs like these and as well as work as a nation to improve our weaknesses which are quite a plentiful, to ultimately secure the tag of a developed nation.

Email ThisBlogThis!Share to TwitterShare to FacebookShare to Pinterest
Labels: My Thoughts, Space 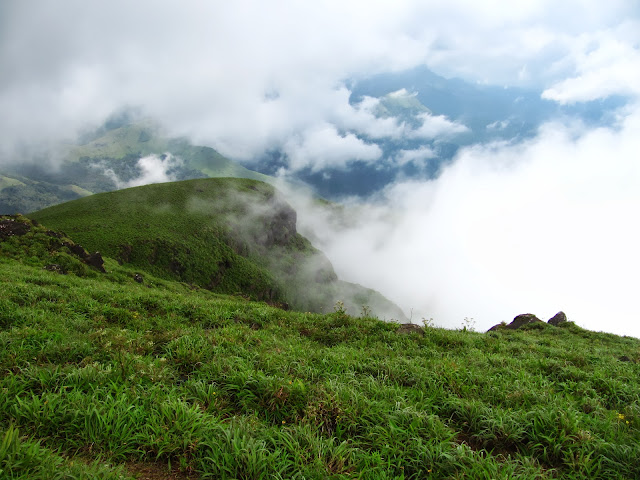 Of late trekking in Karnataka has been a bit of a pain in the ass. Some stray incidents of irresponsible trekkers, combined with some naxal activities in the Western Ghats and with a topping of heavy monsoons resulted in us not getting permission for most of our to-do list of treks. The initial 3 day plan was reduced to a single day trek to Tadiyandamol in southern Coorg district, which is the third tallest peak in Karnataka standing at 1748 MSL and the tallest one in Coorg district. But looks can be deceiving since even after having this distinction; it was a relatively easy trek. 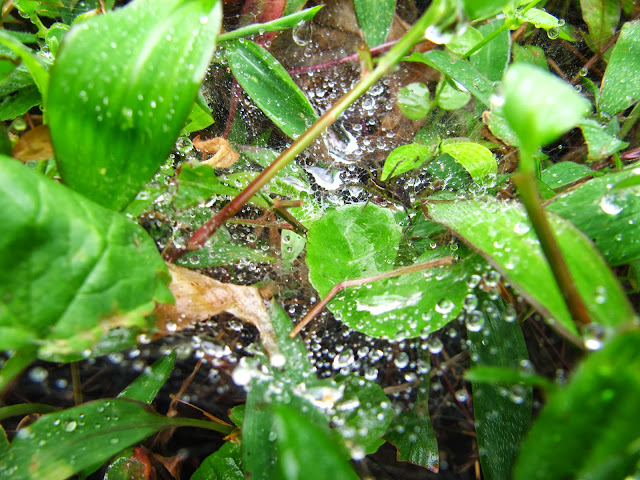 Tadiyandamol literally means "the tallest one" in the local Kodagu language. Initial plan was to trek the peak, cover the palace nearby and finally Chelavara falls. And this we were gonna do in true blue spartan style, i.e. travelling in public transport all the way, hence resulting in the entire trip costing us just 950 bucks which was kinda shocking in today’s inflammatory times. The main advantage of travelling this way is that you interact with the locals a lot more and unlike some alien who is transported directly to the destination, sees it, enjoys it and returns back. We had booked an overnight bus to Virajpet, the nearest major town to the trek spot. 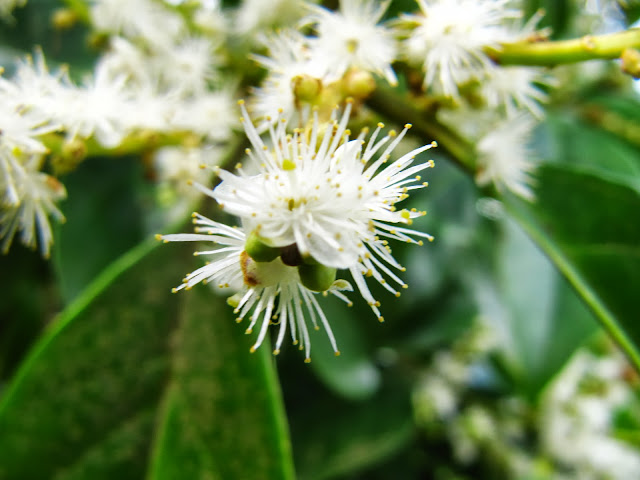 5 of us (Manju, Harsha, Raj, Sandeep and Myself) left on the night of 30th  Aug 2013 from the Mysore Road Bus stand. With the distance to be travelled around 270kms to Virajpet, we reached the place even before we could have a proper sleep at around 5.30 am. We got freshened at the bus stand restrooms, which was pretty decent to our standards. Had our breakfast at the canteen before we could catch the first local bus towards Kakabe which starts at around 6.45am from the private bus stand (around 10min walk from the KSRTC bus stand). 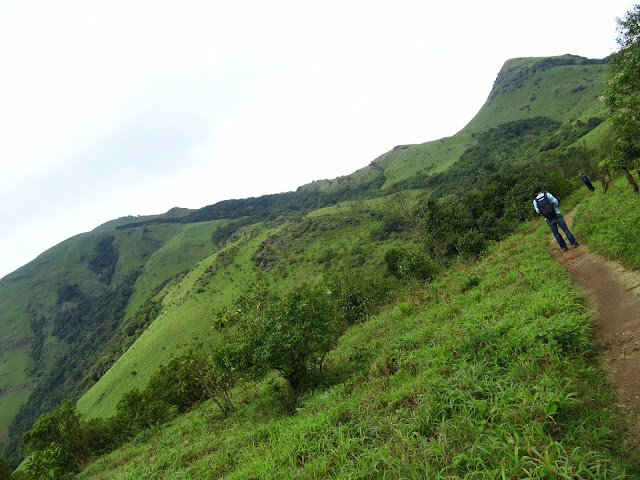 After close to an hours ride from Virajpet we got down at the starting point of the trek (Aramane stop or you can even say Tadiyandamol stop, people will understand) which is around 3-4 kms prior to Kakabe. From this starting point it is close to 8 kms to the peak (GPS reading). The initial part of the trek is via a tarred road and surprisingly the same road goes all the way to the peak without taking any diversions. So a guide is never required for this trek. But at one point trekkers might be confused, which is a Y fork they might encounter almost halfway, and at this point one has to take a left.  The road goes through all the phases possible. Initial tarred road to kuccha jeep trail to kuccha bike trail and finally a trekking trail. The initial part of the road is dotted with numerous estates and resorts, primarily coffee and cardamom ones. 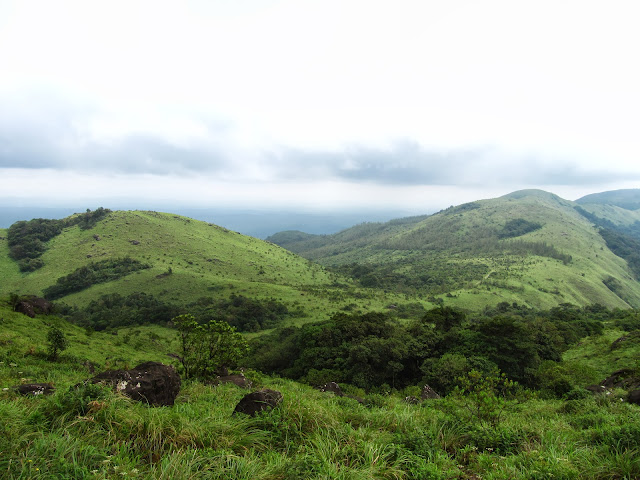 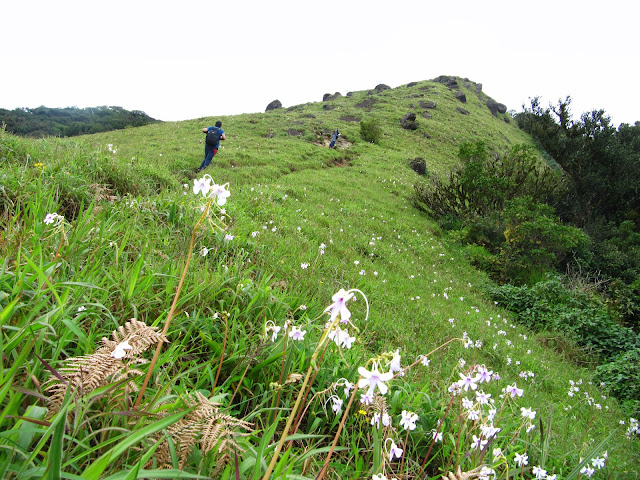 As we gained elevation the views started to get better, surrounded by absolute greenery and greeted every now and then by some cheerful mini waterfalls flowing across the trail. Soon enough we came across a clearing and we suddenly got the first clear view of the Tadiyandamol peak and the lesser dominant peaks flanking it, and this clearly was a “WOW!!!!” moment of the trek. The weather so far was quite pleasant and from this spot onwards the trail was going through grasslands. Since this was post monsoons we encountered some leeches (1-2 bites each), but much lesser than what we had actually anticipated. 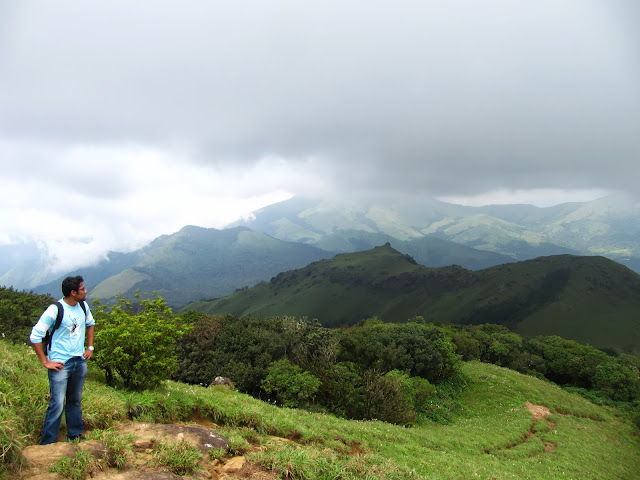 Only after we reach the base of the peak does the real climb start, which until now can be termed as more of a walk in the park. With an elevation of close to 45 deg, the last 1km was the most taxing part of the entire trek. But we were welcomed by so many wild flowers which have sprung up post-monsoons. When we were close to reaching the peak, we were suddenly engulfed by mist and it started to rain out of nowhere. But thankfully this didn’t last for more than 5 mins, hence not drenching us much in process.  Finally we reached the top, where clouds were playing hide and seek providing some enchanting views. Also we came across a “married guys” gang from B’lore who were giving gyan for our “unmarried guys” gang about the dos and dont’s of marriage: P. They were quite drunk which explains all the gyan distribution, but they were quite responsible trekkers, going to lengths not to litter the place. So I have no complains :). 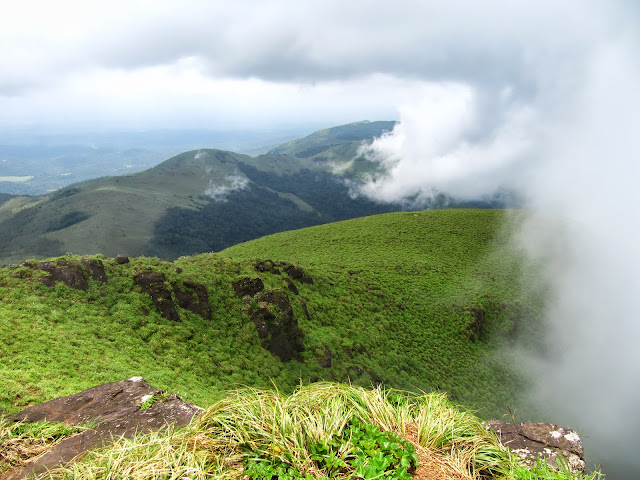 After spending close to an hour at the top, having our lunch, we started the descent at around 1pm.  As expected the initial km was taxing on the legs. Reached back to the bus stop at around 3.30pm after a long walk. As soon as we reached the stop it started to rain cats and dogs, “WESTERN GHATS” style.  Our plan was to take a bus to Chelavara falls(Cheyyandane stop) retracing the same route back to Virajpet and from there take a local auto till the falls. Soon enough the rains stopped and a bus arrived and we boarded it. The last bus to Virajpet leaves Kakabe at around 6.15pm, after which there are very less transportation options. So we had to visit the falls and return back before that.

Got down at Cheyyandane town, had a wonderful lemon tea at a stall nearby and took a 4 wheeler auto ;) to the falls which is around 3-4 kms from the main road. There is road right upto the falls. And within no time we were into the freezing waters of this beautiful falls. Infact I found this falls to be much better than the much hyped Abbey falls near Madikeri. Finally we returned back to the main road and the last bus arrived at 7pm (delayed ofcourse J ) and we reached back to Virajpet at around 7.30pm.  Then it was time to find some good eatery/restaurant and unfortunately we didn’t find one and had to content ourselves with some crappy meal. Boarded the 10.15pm overnight Rajahamsa bus back to Bangalore, which unfortunately was infested with bed bugs….!!!! The WTF moment L. Anyway reached Bangalore early morning and spent the remainder of the day just catching upon lost sleep over the last 2 nights.