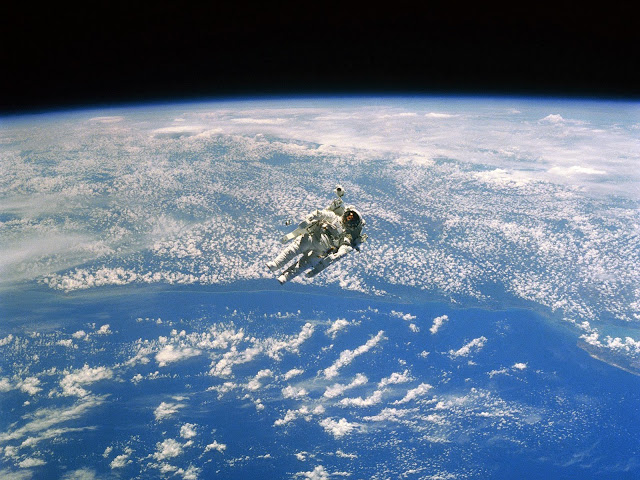 "The feeling of weightlessness, floating around like a feather. The absolute silence where you will not be able to hear anything other than your own breathing or at the most some radio chatter. The abyss of darkness extending to astronomical distances which a human brain is not able to put into perspective. The best view ever possible for a human, of seeing the Earth, from a height of 330km, to see the planet as gigantic blue ball and the one we call as home. The fear that even a small malfunction would put a big question mark on ones ability to survive."

Now that can be described as my ultimate frontier..... SPACE !!!!! And this frontier is placed even higher than entries such as Antarctica in my bucket list ........ Ofcourse I would have liked traveling to other planets, staying there and that sort of things, but come to think about it, I don't suppose that would happen within my lifetime, unless someone introduces a wonder drug that would make me immortal :) !!!!! (philosophers stone someone ???!!!! :P). I even thought of applying for the recent competition for the one way ticket to Mars. But it got me wondering whether I would really like to spend all my life in some barren planet breathing compressed air from a cylinder which I might have to carry for the rest of my life in that god-forsaken planet. The answer was definite NO... I would love to visit any planet, but no matter what, I would love to return back to earth, which is MY HOME...!!!!! The serious applicants must be truly brave(or mental :P ) to take a one way ticket to this planet and NEVER TO RETURN BACK TO EARTH...EVER !!!!! Definitely not my cup of tea. The first batch is expected to blast off from Earth in the year 2022. Lets see how that goes.


And movies like Gravity are further fueling my urge to achieve this final frontier. This movie was hyped as "The Closest you will ever get to Space !!!!!" and watching the movie in IMAX 3D paying 500 odd bucks I in fact felt a lot closer to space. But deep down I know that such sort of virtual experiences is not gonna satisfy my spatial urges on a long term basis. And the reports that they have started commercial operations beyond the stratosphere has been quite encouraging, such as Virgin Galactic, a ticket for which would make one poorer by around quarter million dollars. Of course the cheapest among these so called space tourism operators is the $75,000 balloon based trip to the edge of space. (Link) That comes around to INR 45L, which of-course is still quite a big amount. Interestingly in comparison one can reach the summit of Mt. Everest for around INR 25L (assuming one is in top physical condition). Hopefully by the time I retire (not sure when I will be doing that :P ) I would have saved enough and there would have been higher frequency of space flights so that the ticket price would have come down considerably. Probably would have to start an account similiar to my PF so that I would be able to contribute small amounts to it on a yearly basis and watch it grow until the final showdown :P.

The nearest space like experience I had apart from the above mentioned virtual one has got to be scuba diving, which I did in the beginning of this year. The weightlessness, the silence, the view(of course a different world altogether) and the fear. In short it was all there.Being born as a human has got to be one of the most gifted things one can possibly have on this planet. So many experiences one can enjoy and yet somehow I wonder whether one lifetime would be enough for it. Hopefully some sense would prevail and all the so called "humans" would try to protect this planet in unison. This is one experience wherein my blog title "My Earthly Experience" would not be appropriate for !!!!!!. Funny that for everything else it is :P.

Posted by Nithin at 7:01 PM No comments:

Email ThisBlogThis!Share to TwitterShare to FacebookShare to Pinterest
Labels: Movies, My Thoughts, Space

The year is Nov 1998 : Shashi encourages me to ride my cycle to school. A total of 6+6=12 kms in a day, something which was unimaginable during those days. Finally both of us rode to school and back. My legs were literally shaking after the ride !!!!! After that became a regular cyclist to school.

Now cut to Nov 2013, 15 yrs after the so called long distance ride, me and Shashi decided to have a get together and guess what, we decided for yet another long distance ride :P.  A nostalgic trip down memory lane.

Plan was to take the shortest distance to Savandurga and return back in the same path resulting in a total ride distance of around 80kms. But fate (and some dogs!!!! :) ) were planning to play a big prank on us and instead of the shortest path we took the longest path to Savandurga and Manchanbele dam, and hence resulting in it becoming an unexpected centurion ride, my first after a gap of nearly 2.5 years.

Plan was to leave in the early morning of Nov 1 at around 6.30 am from Kengeri. Initial part of the ride was relaxed with us catching up with each others life after a long time. Mysore road even at this hour had heavy traffic which was reminiscent of the upcoming long deepavali weekend. We left Mysore road at Ramoli cross and after that we encountered hardly any traffic. Reached the Big Banyan tree within no time.  Even though I have been to Manchanbele dam earlier I had hazy memories of the route. We came across the crossing and my intuition said that we might have to take a left. Before I could stop and ask the villagers around or check the google maps, out of nowhere a pack of dogs (nearly 5-6 I suppose) started to chase us and all the intuition went running down the drain and we went straight. Animal instinct took over human logic :).

Now this small event was the source of the ripple effect we were to encounter the rest of the day. A not so fine example of  "Butterfly Effect" eh :P. We went straight enjoying the ride and still I didnt even bother to check the maps. Then suddenly we joined a fairly main looking road. Again a sense of "something is not right" seemed to creep in. Finally stopped and checked the maps. To our amazement we had overshot our destination and heading straight towards Magadi. Now there were 2 options, either retrace our path and take the right turn or continue to Magadi and then take a deviation from there. Obviously we didnt want to retrace the path, hence we continued towards Magadi on this road which had steep inclines and the sun was also determined to torture us,  for the remainder of the day. 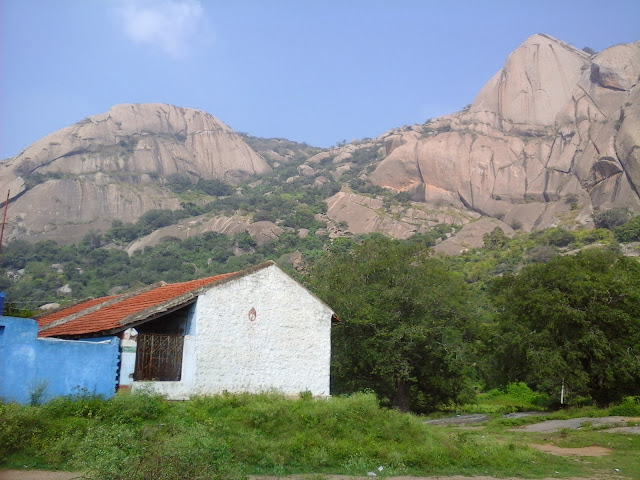 With no breakfast and no eateries along this route our tummies were grumbling within no time. Had a couple of tender coconuts and a couple of bananas which fueled our entire ride. This has got to be the most ill planned cycling trip ever :P :P. After Magadi we were back to village roads and we finally reached the cross roads to Savandurga. The road from the crossroads is more of an offroad trail and we enjoyed riding through it. After spending some time at the base of this giant monolith, we were on our way to Manchanbele dam. But again we overshot the turn that we had to take towards the dam, by around 5kms and heading towards Ramanagara :). Again after some time sense prevailed and we started retracing the path. But fortunately we found a shortcut to the dam from here thanks to Google maps which was working only in certain pockets. 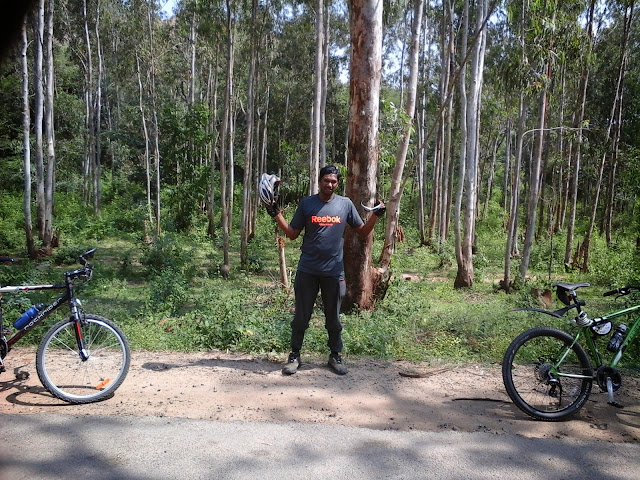 The initial part of this path is dotted with quite a dense forest and then starts the killer climb towards the dam. This 2km climb is so steep that even vehicles like loaded trucks have a hard time climbing it. A tractor was even doing a wheelie :D :D. We stopped at a spot where we got some awesome views of the dam's backwaters. After that it was back to climbing, climbing and more climbing. It was more or less a climb till we reached the spot where we were chased by the dogs. Just imagine if we had taken the route in the morning, we would have sped like a rocket.

We finally reached Mysore road and then on reached Kengeri at around 1.30 pm. I  had only 9 kms to reach my home, but unfortunately my quad muscles started to pull bcoz of all that climbing. Had a hard time pedaling in this final leg of the journey ..... Took an hour to pedal the final 9kms. Must be a personal record of sorts :D. Shashi on the other hand bid adieu at kengeri to pedal all the way to Yelahanka to meet his lady love. The things people do for love ;). Overall this has to be the second toughest cycling trip ever (after Solo Nandi Ride ofcourse :) ), which happened primarily because we were totally unprepared for a century ride and also because of the steep inclines. The weather also didnt help us either. But at the end of the day it was one hell of a ride. 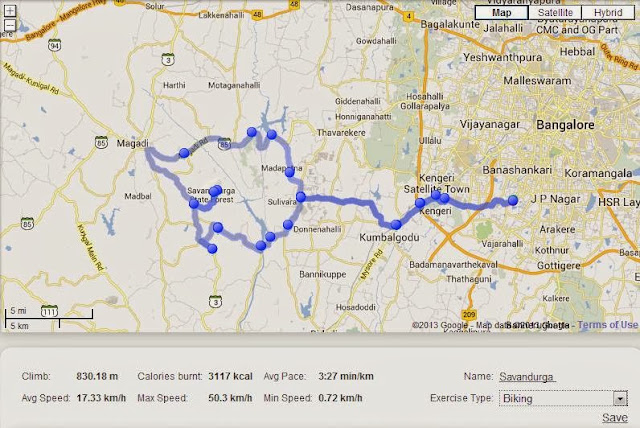 Posted by Nithin at 7:27 PM No comments: