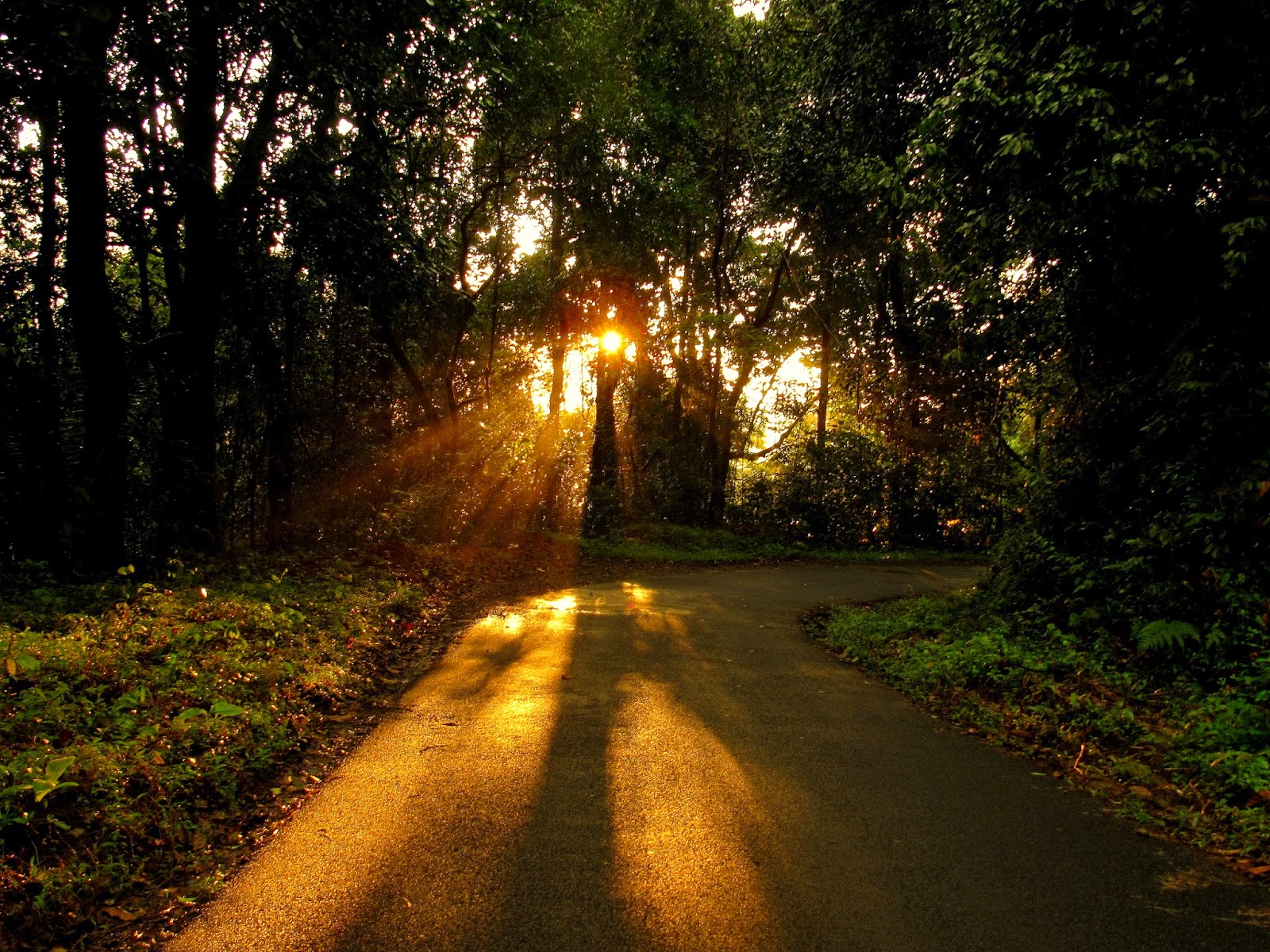 On a drive to my grannies place took detours to explore some of the places nearby and this is how a trip to native place got converted into a part time vacation. On the long Deepawali weekend we had 3 days exactly to explore the districts of Kodagu and Kasaragod. Post monsoons is one of the best seasons to visit in South India where everything is lush green and some of the views which we got were simply awesome.

We started early morning towards Mysore and after a brief stopover there we were on oue way to Coorg. The places to be checked out in Coorg were Bailakuppe, Talacauvery and Bhagamandala. First came Bailakuppe on the Mysore-Coorg Highway. This settlement of the Tibetan refugees is a must visit place for an insight of the culture beyond our Himalayas. Huge golden statues of Buddha and Maitraye adorn the temples of this settlement. Its a good place to spend close to an hour or two exploring the various temples and the neatly manicured gardens. 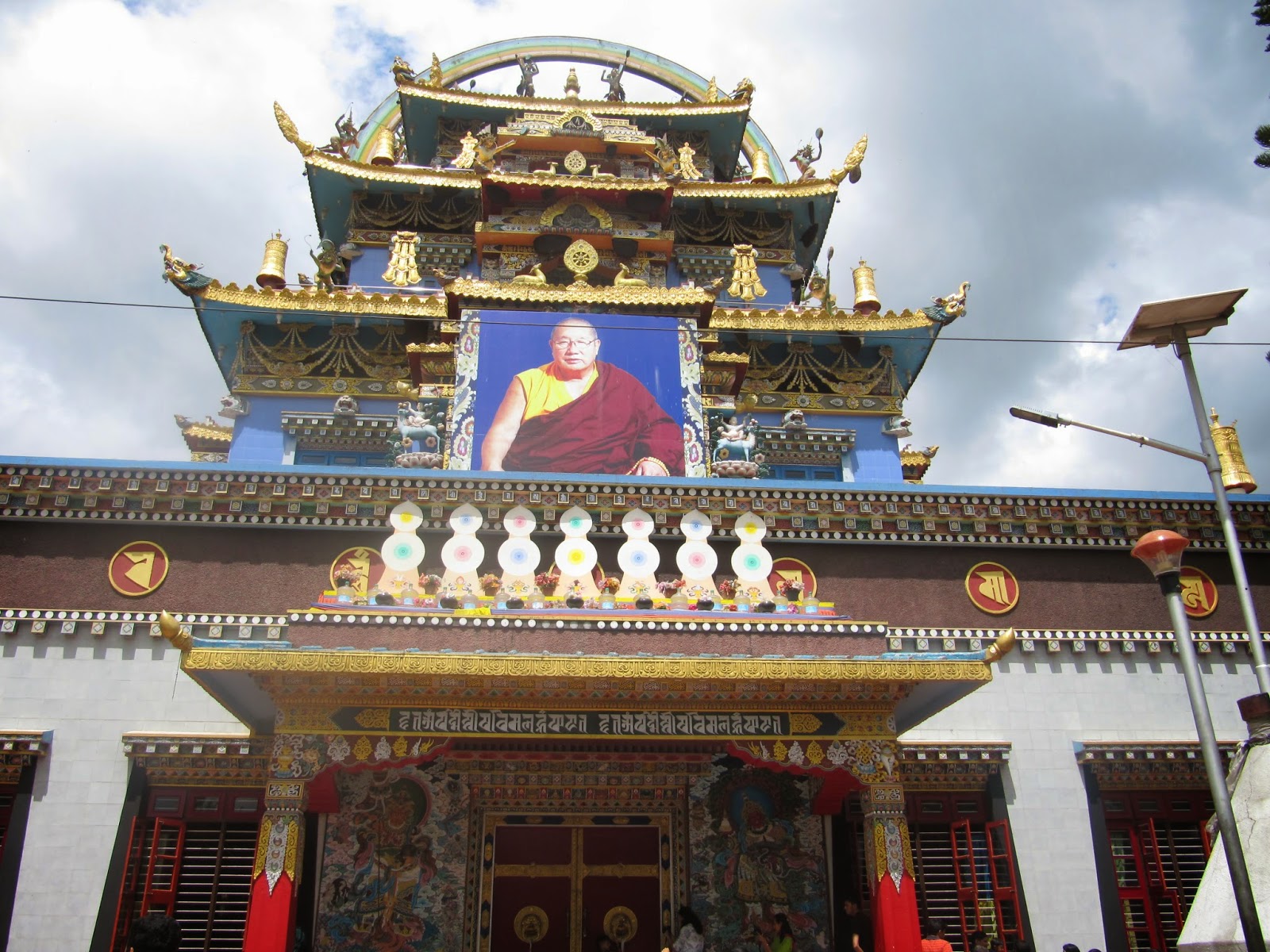 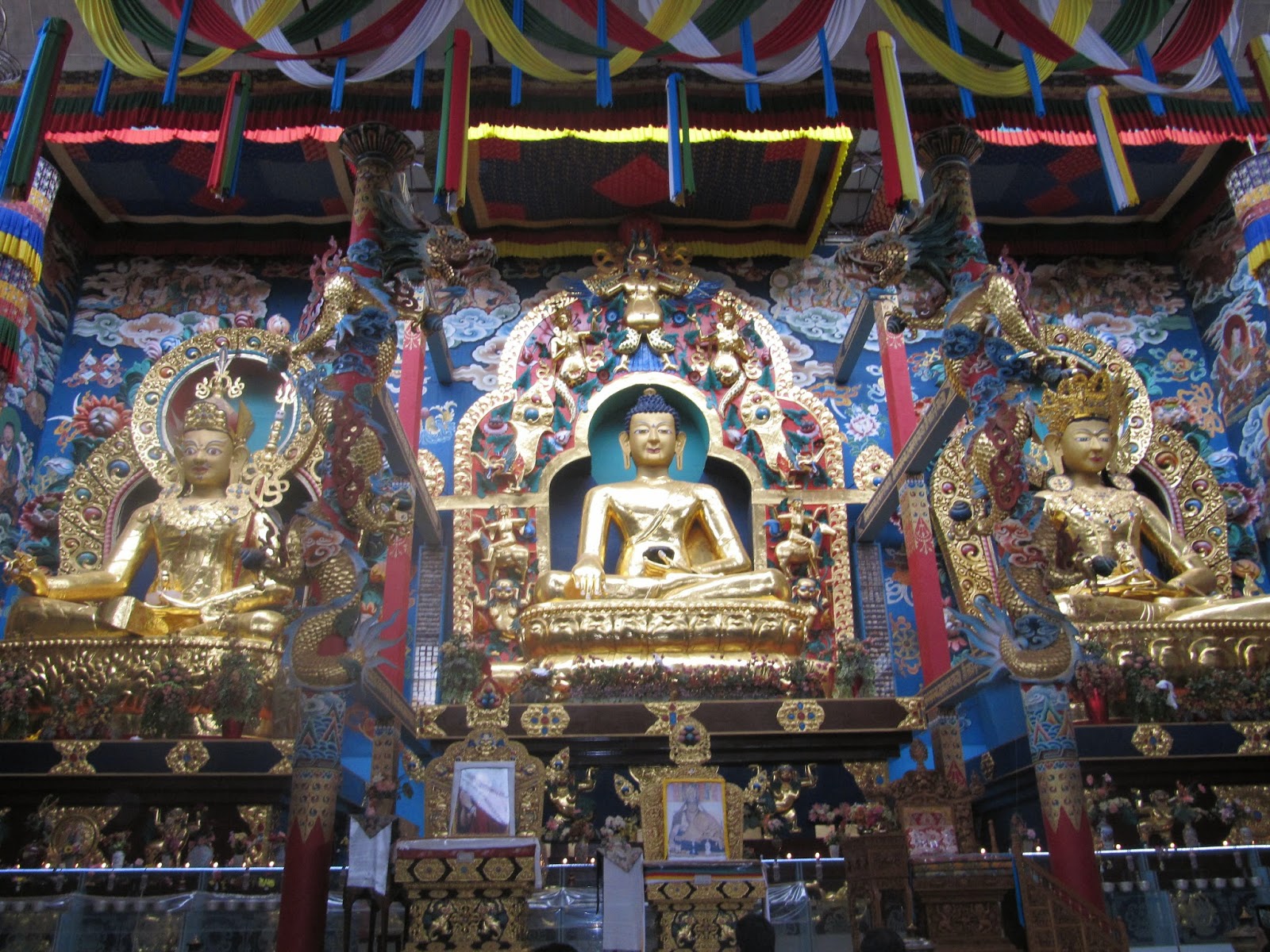 The next destination was Talacauvery and Bhagamandala region. After having a lunch stopover at Madikeri (finding pure veg restaurants in  Madikeri is a bit of an effort !!!! ) we took a detour from the Madikeri to Mangalore highway towards Bhagamandala, which is around 35kms. The route is narrow passing through a lot of plantations but it is decent enough. Reached Bhagamandala and decided to visit it on the way back from Talakaveri. Bhagamandala to Talacauvery route is one of the most picturesque routes one can find in Coorg district. This 7.5km climb via the ghat roads, provides some breath taking sceneries and to add to top of it, it started raining, drizzling in the beginning which turned to full blown rains when we reached the top. Had darshan in the heavy rains almost getting drenched in process. While coming back the rains had subsided a bit, therefore giving us a lot of photo ops with greenery, post rains weather and mountains. 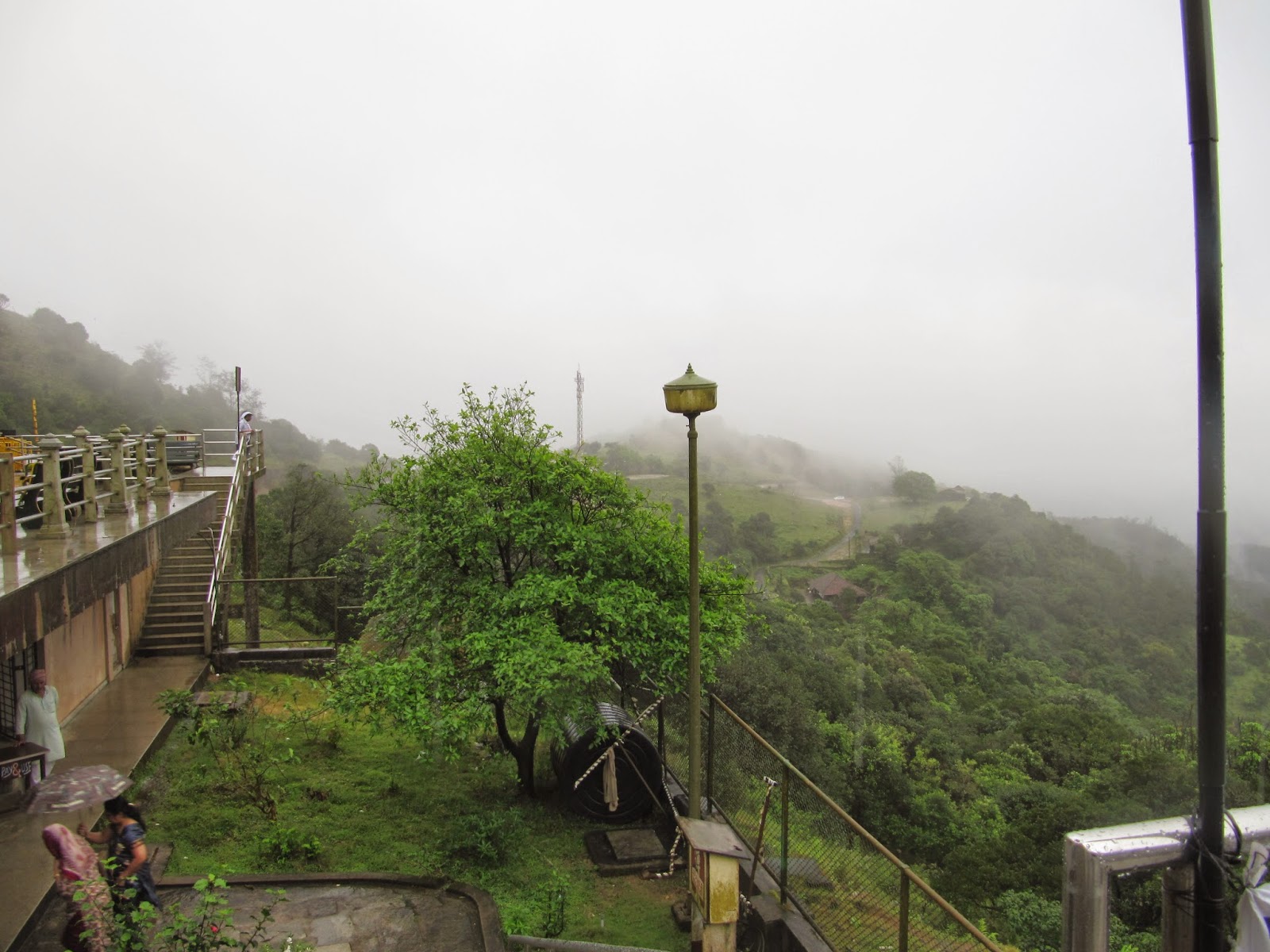 Came back to Bhagamandala and visited the main temple by the banks of the river cauvery and I found this place to be so peaceful, unlike the crowded atmosphere in other major temples. Spent some time in here and it was time for us to go to Sullia. There were 2 options in front of us, first one was to retrace our route back to Madikeri and then take Mangalore highway or to take the unknown route to Sullia via Panathur. Since the latter would save close to 60km of driving distance we decided to risk taking the shortcut and there was no looking back after that . 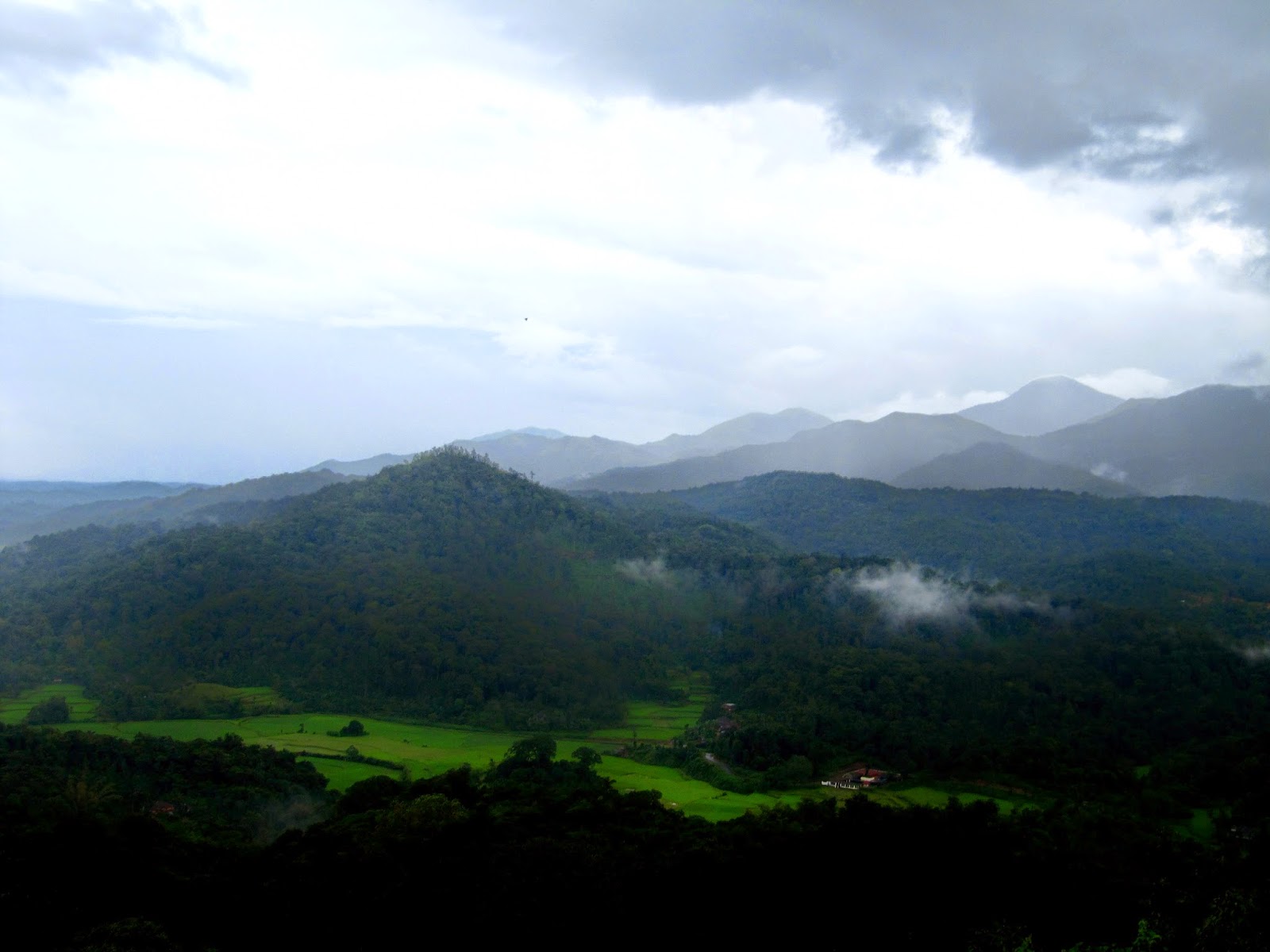 The initial part of the route from Bhagamandala to Panathur is via dense forests of Talacauvery National Park and this route can get as dense as a forest route can get. Even though I had gone via this route on my bike trip to Kasargod in 2010, this time around it was during daytime unlike the last time and we came across numerous water falls enroute. Further this route seems to be hardly used as we came across some 7-8 vehicles during the entire 2 hr ride to Panathur. The condition of the road through the national park is good. By the time we reached Panathur it had become dark and from here we had to take a detour towards Sullia. Now this stretch of the road was bad. Huge potholes filled with water from the recent rain and the complete absence of civilization makes this route a bit of a liability especially after dark. Anyhow the progress was slow, but event less. We  reached Sullia and thereafter to grannies home.

The next days plan was to explore Kasargod district. The places on our hitlist were Bekal fort, Ananthapura Lake temple and Madhur Temple. We first visited Madhur temple and by this time it started to rain quite heavily. Therefore we had to visit the temple in heavy downpour. The most interesting thing about this temple is a spot which is identified as the one where Tipu Sultan has stuck his sword in order to destroy the temple. But I am more interested as to why he left the temple alone after just one deep gash on the wall with his sword ????!!!!!! 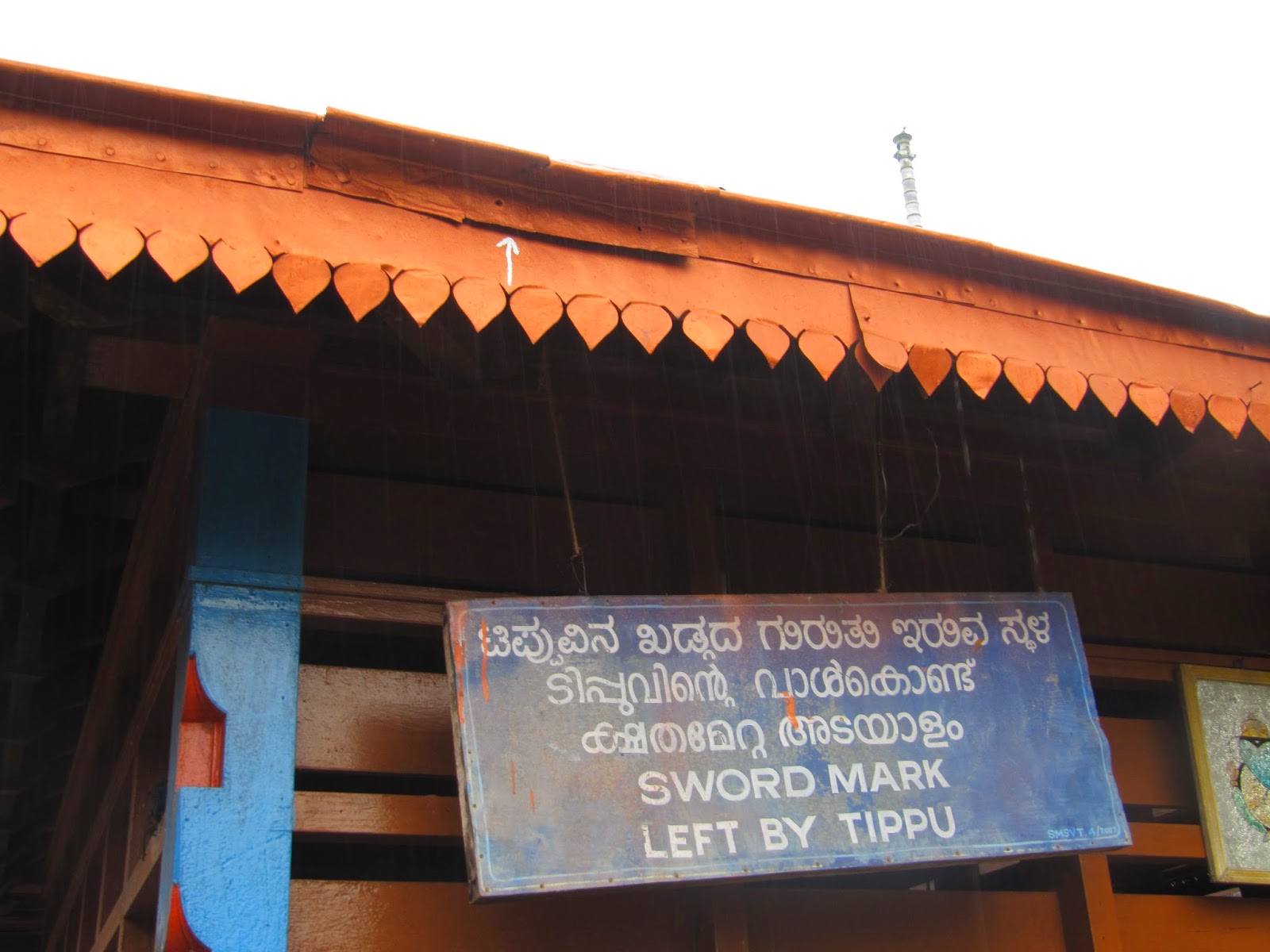 After this we visited the pristine Ananthapura Lake temple, which is famous because of the vegetarian crocodile which resides in the lake around the temple. I turned on google navigation to take me from Madhur to Ananthapura temple and eventhough it took on the shortest possible route it was not the best. The entire route was through some backroad with bad condition. Somehow we reached this temple which seems to be in the middle of nowhere, but nevertheless in middle of calm and inviting green waters is a treat to the eyes. Unfortunately we couldnt get to see the famous crocodile which according to the priest was sleeping in a cave adjacent to the lake. And more interestingly it just eats the rice balls the temple priests offer it and doesn't even touch the abundant fishes in the lake. This is one of the more unique temples I have ever come across. 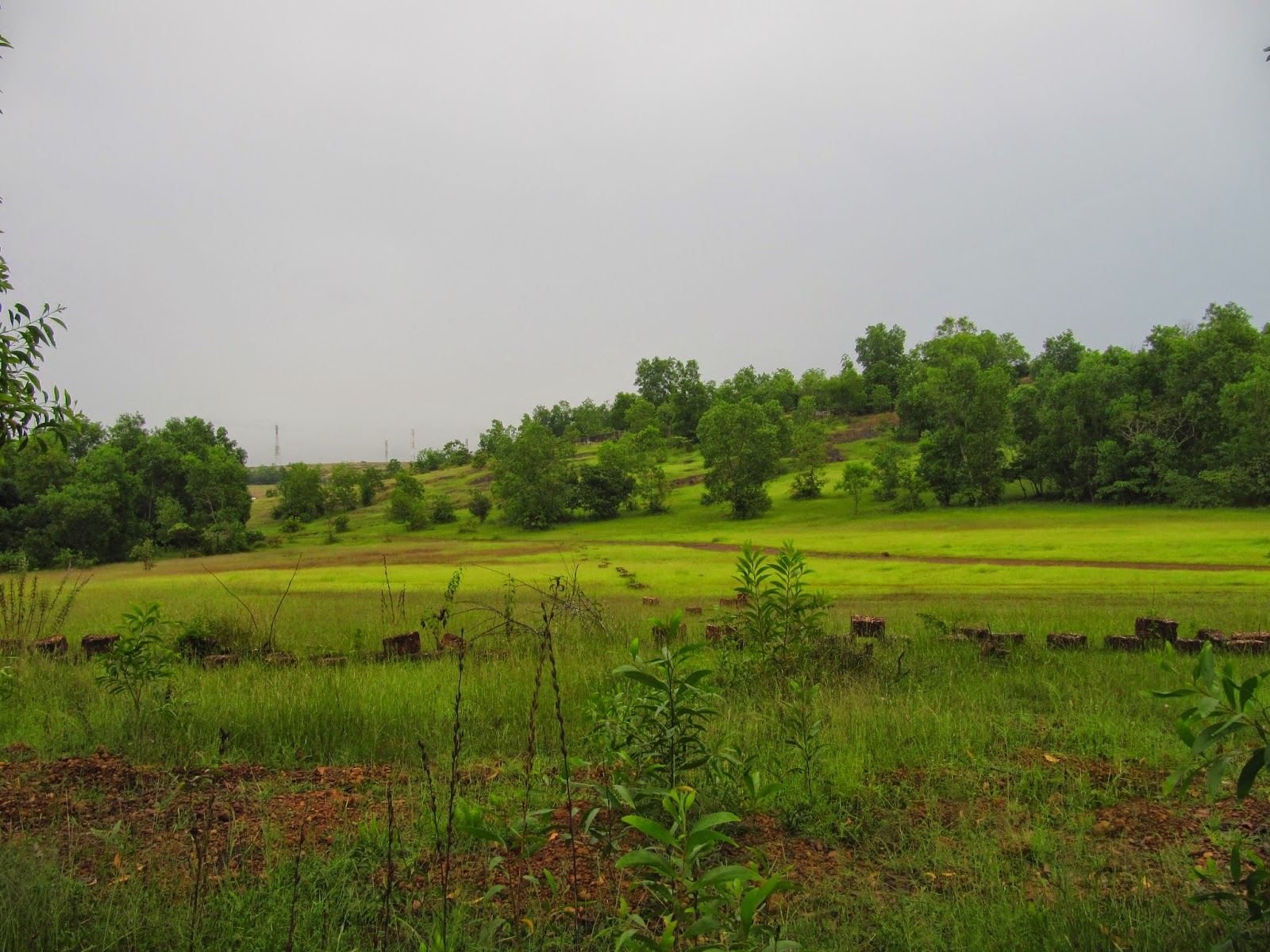 Next and final destination for the day was Bekal fort. For this we had to take NH17 and unfortunately for the majority of the route NH17 was under full blown repairs hence we had a very slow progress. Finally by around 1pm we reached the place. Fortunately because of the rain clouds it was a pleasant affair by the beachm eventhough it was afternoon. We explored this huge fort which has changed hands from the likes of Shivappa Nayaka, Tipu Sultan , The British and finally to the Govt Of India. This fort overlooks miles and miles of pristine beach land and in this particular season it was such a pleasant affair. We explored this fort for an hour or so, including a point where huge waves strike the boulders and results in huge water splashing everywhere. From here visited my wife's grannies place and the final day it was just an eventless return journey back to Bangalore. 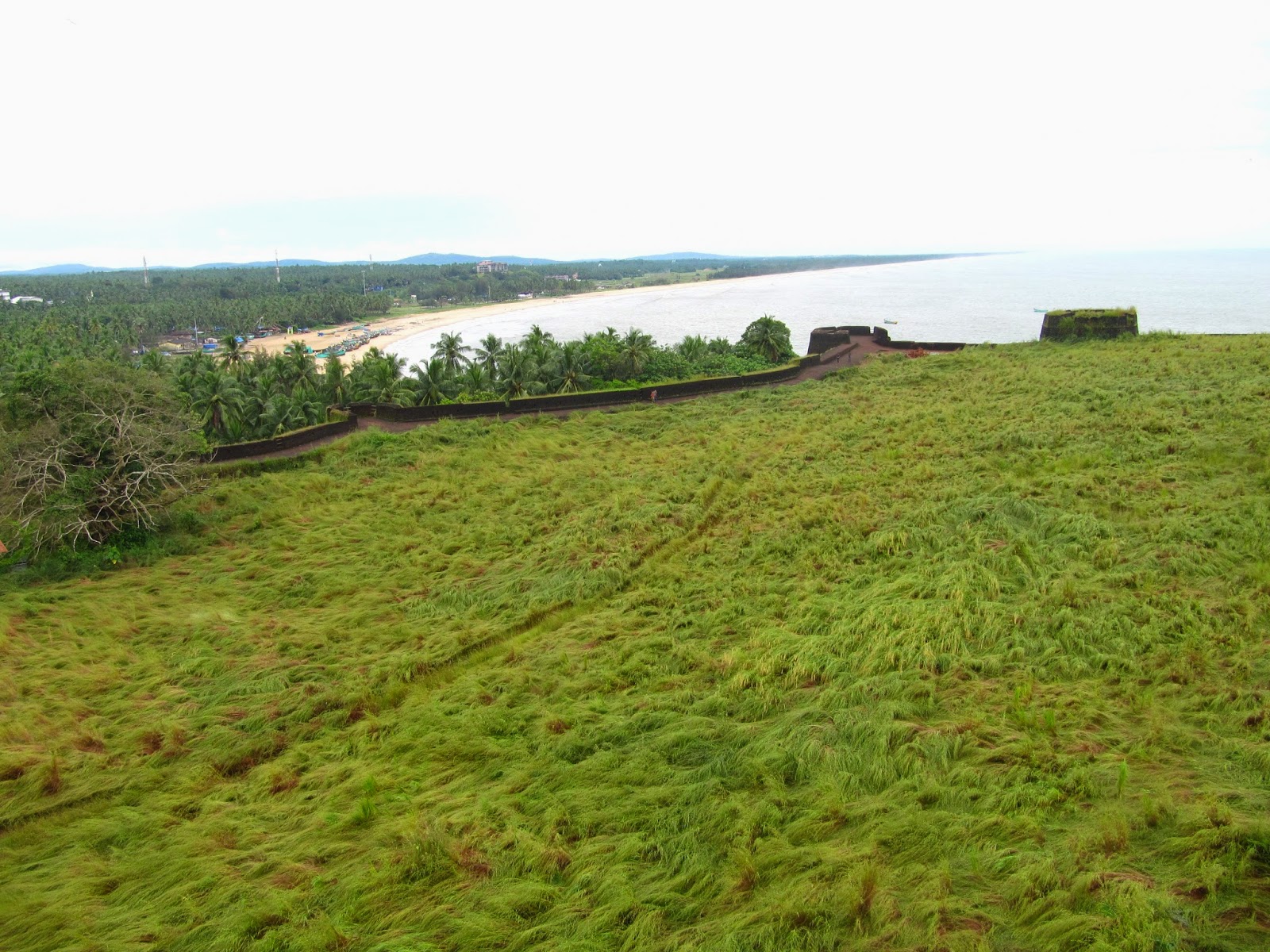 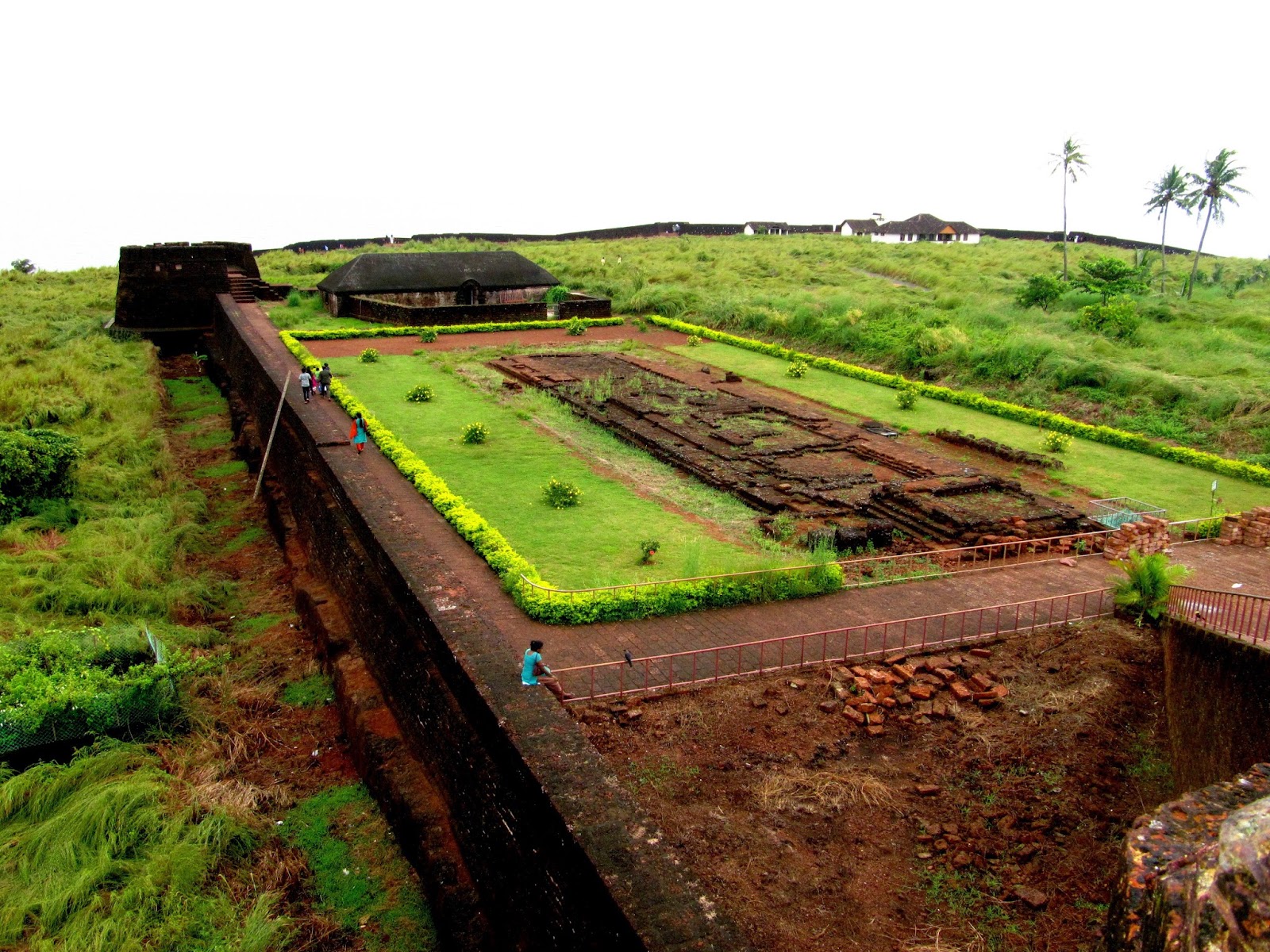 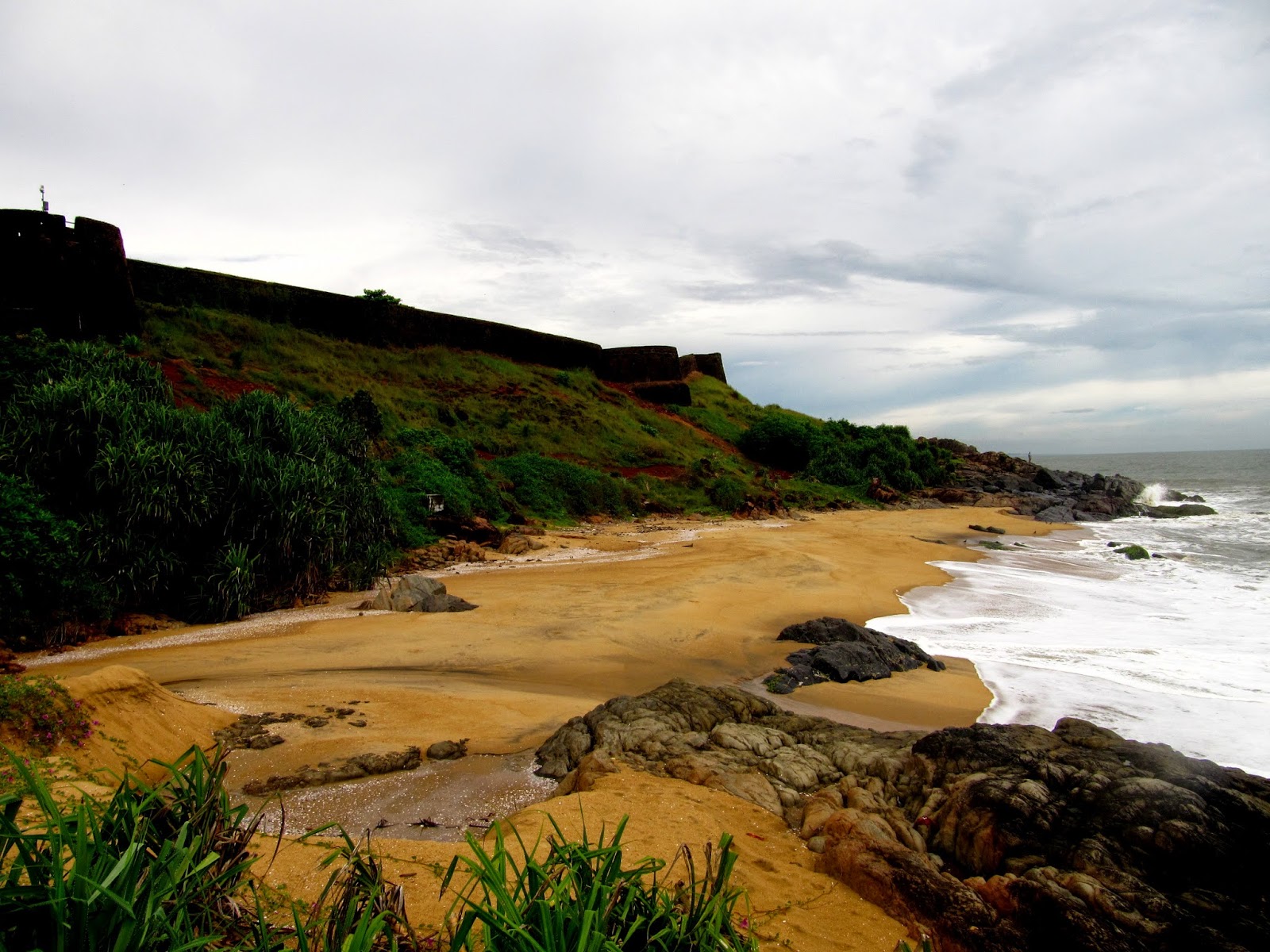 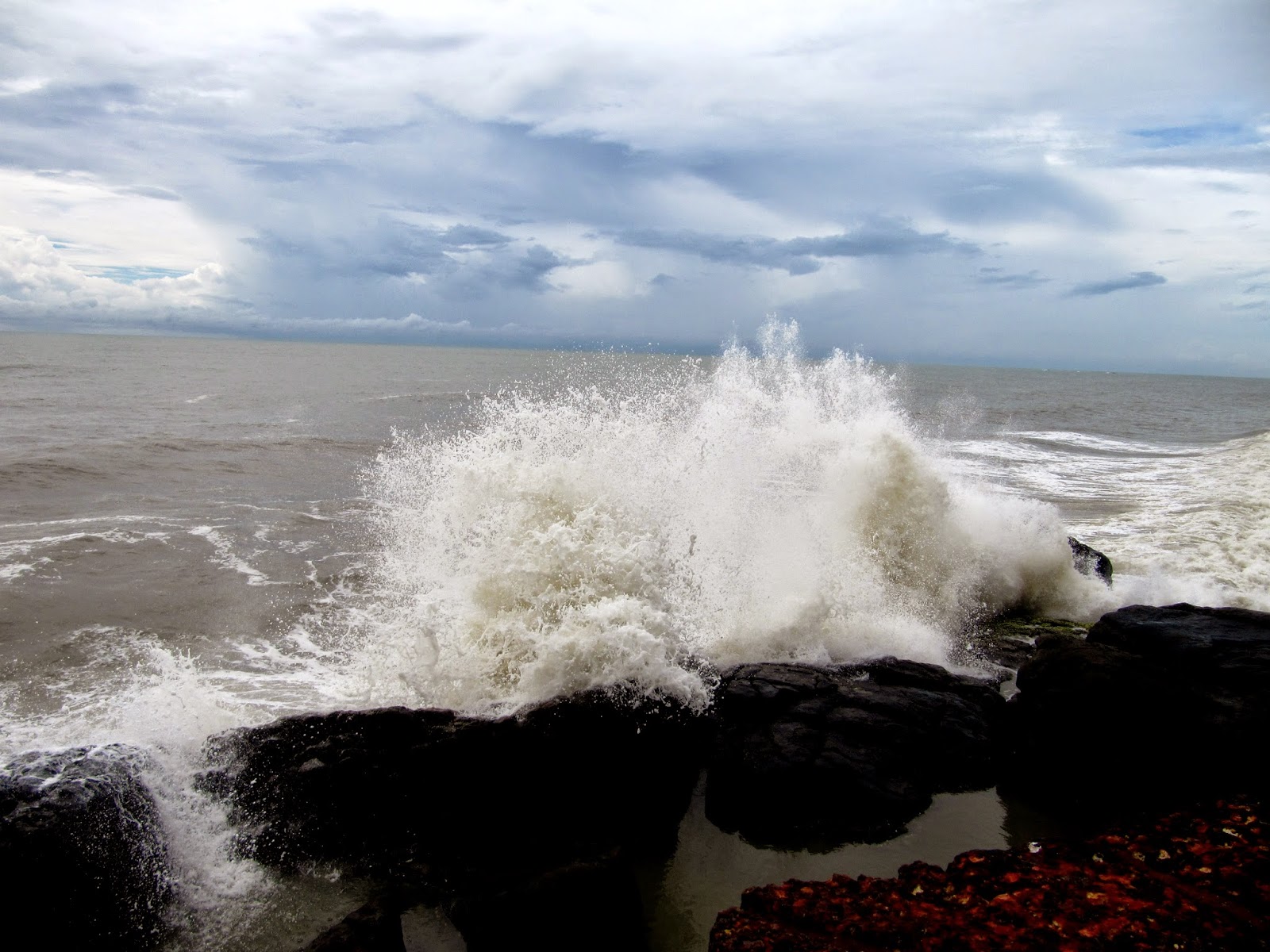