My third appearance at the much popular marathon (technically this is not a marathon :P ) in the Southern part of India and I had some unrealistic aims set for this event. For starters I had an aim of finishing my 10k run within the 50 min mark. Why the 50 min mark ??!!! , you can blame that on the organizers. They have segregated the runners as Category A for those having a best time of within 50 mins, Category B for those having it between 50 mins and 1hr 20 mins and Category C for anything above it. Missing the Category A by just 2 mins and being officially classified as a second class runner got me raging mad :P. So decided that no matter what I would finish within 50 mins and calm myself down.

But with the total show of strength being close to 23,000 pair of legs and growing exponentially over the last few years, I somehow knew that this is going to be one tough job. For starters the initial pain of overtaking innumerable slow runners/walkers makes matters worse. There were a lot of slow runners/walkers since the corporate participants were let into the track before us. But on the other hand weather was superb thanks to heavy rains the previous day and the overcast sky. Were let into the track at around 7.20 am @ Kanteerva Stadium. The run again goes through the traditional route followed the previous years comprising of Kasturba Road, MG Road, Cubbon Road, Vidhana Soudha and finally Cubbon Park before ending back at Kanteerva Stadium. Maintained a constant pace of around 11.5 kmph and finished my race strong with a final sprint with a timing of 52:46 mins, 6s slower than my best :). Over the previous 3 editions my timing has improved from 59:57 mins(2010) to 55:40 mins(2011) to 52:46 mins(2013). Atleast was satisfied bettering my event record :P.

But one thing I learned was never to have a timing goals at this event. Just run for the love of running, enjoying the company of the fellow runners and absorbing the whole festive spirit. My overall ranking was 593 and surprisingly my gender ranking was 585. That means only 8 females in the whole of Bangalore have a better timing than myself ?????!!!!!!!....(out of that I saw 2 western ladies overtaking me :P ) This ratio is definitely skewed and I guess more females should be encouraged to take up running as a sport.

The organizers have announced that this year too the top 850 male runners would get the Nike Finishers T-shirt (THE t-shirt which cant be bought but earned ;) ), down from 1500 given the last few years. The number of participants are increasing, but these guys are reducing the number, looks like they need some basic lessons in ratios. Anyway, hopefully they are increasing the quality of the t-shirts. Still working hard for the coveted Category A :). 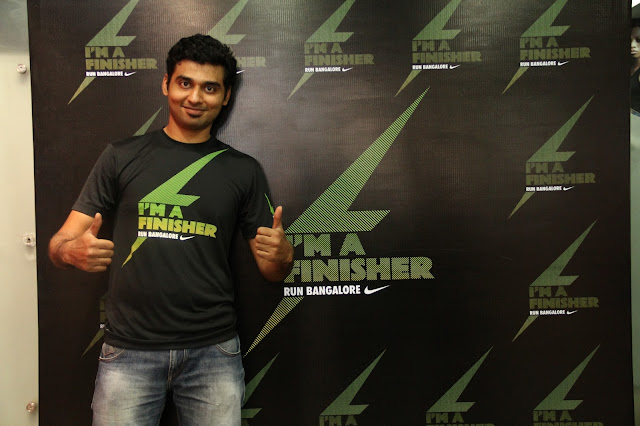