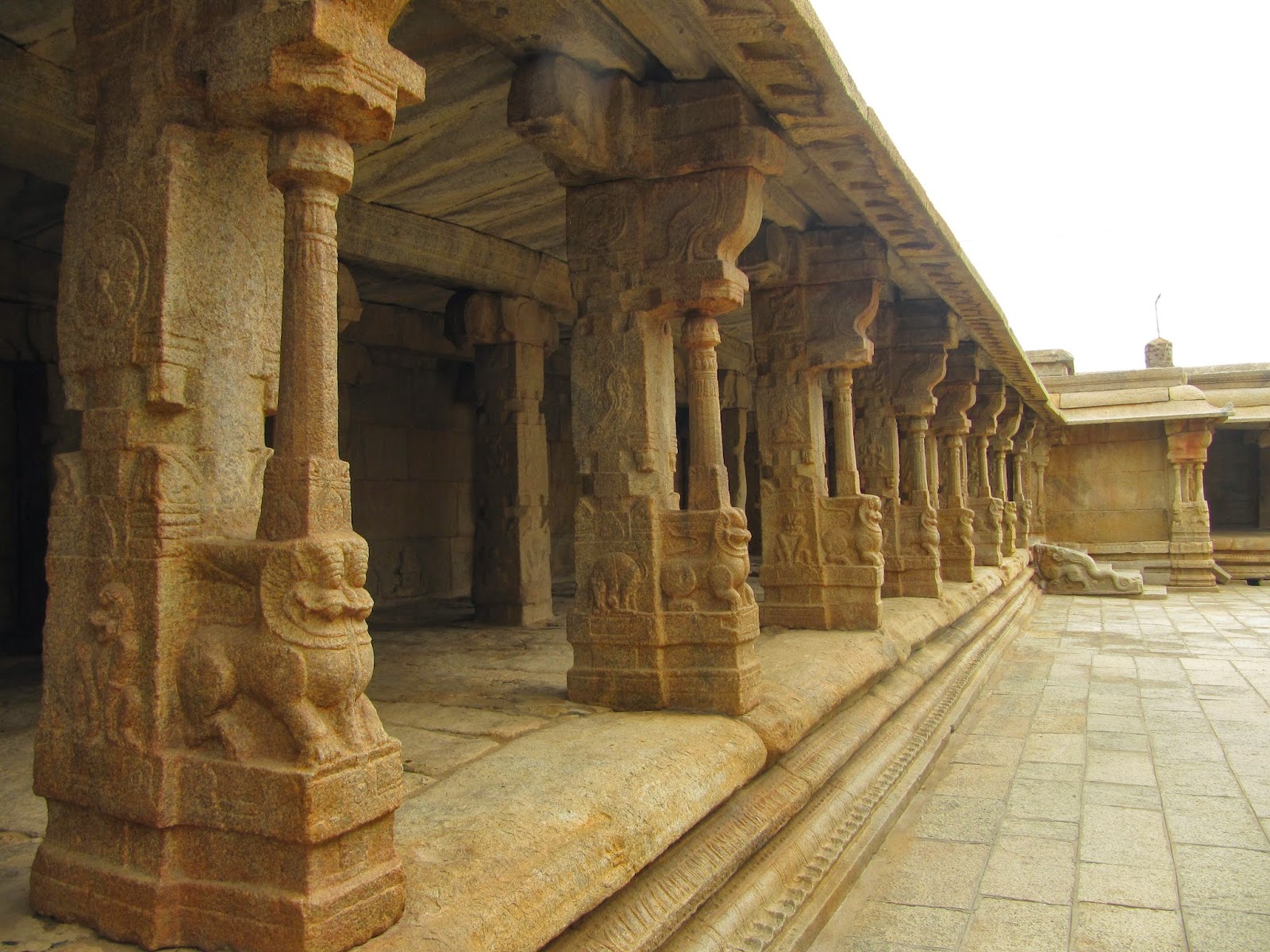 Lepakshi, a sleepy little town along the Karnataka-Andhra border might appear insignificant in today's modern age, but mythologically speaking it plays a very important role. This is the place where it is believed that Ravana who had abducted Sita had fought Jatayu and incapacitated it. Once Rama arrived he gave the command "Le Pakshi" (or "Rise Bird" in  telugu) and this is how the town got its name. Therefore for the religious it is a very sacred place and for others its a very interesting place to explore the Vijayanagara architecture and listen to the various legends and stories associated with this place.

Travelling to this place from Bangalore is no brainer at all , with the roads being close to being great. At a distance of 120km from Bangalore, one has to take NH7 towards Hyderabad and after crossing Kodikonda has to take a 16km diversion to Lepakshi. Even this part of the road is good. But the major problem one would face is the number of decent eateries which are very few and far between. One wouldnt even find the Cafe Coffee Days which would have normally lined up in other major highways. The only decent eateries are Kamat Upachar after Chikkaballapur and APTDC Hotel in Kodikonda just before taking a diversion towards Lepakshi. 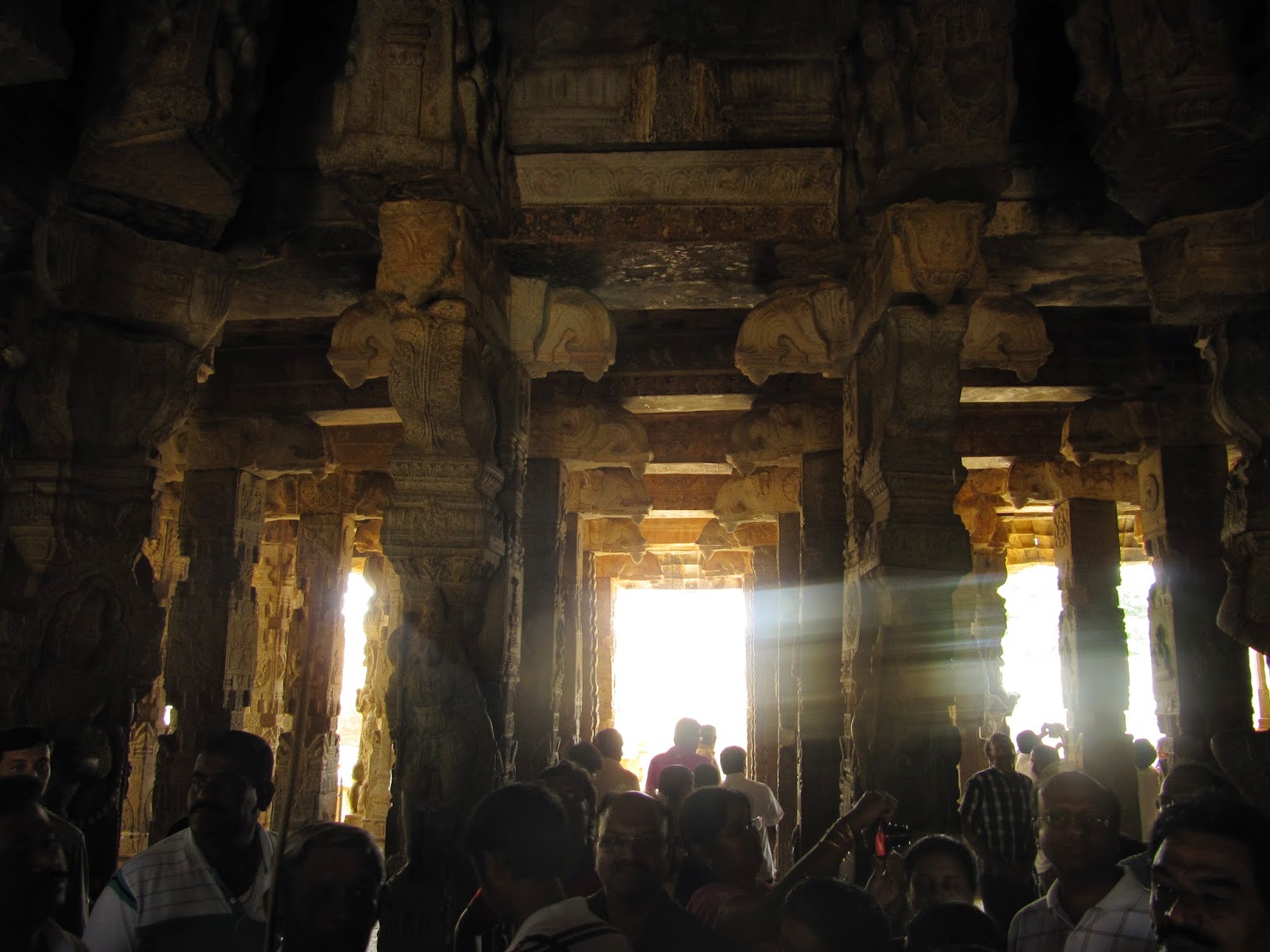 So on a long weekend with nothing better to do decided to go for a bike trip to this place with my wife. Left early so as to avoid the harsh sun, but within no time it was quite sunny. Frankly speaking I didnt find this route pleasing for a bike ride, since majority of the route was dead straight without any curvy roads and to add to that these regions are quite dry and hot without any greenery around. Took nearly 2.5 hrs to reach this place and the first thing that greats you is the worlds largest monolith Nandi statue.This intricately carved white granite statue is simply beautiful. After spending some time in the lawns surrounding this statue we left for the main attraction of Lepakshi which is the Veerabhadreshwara Temple dating back to 15th century. 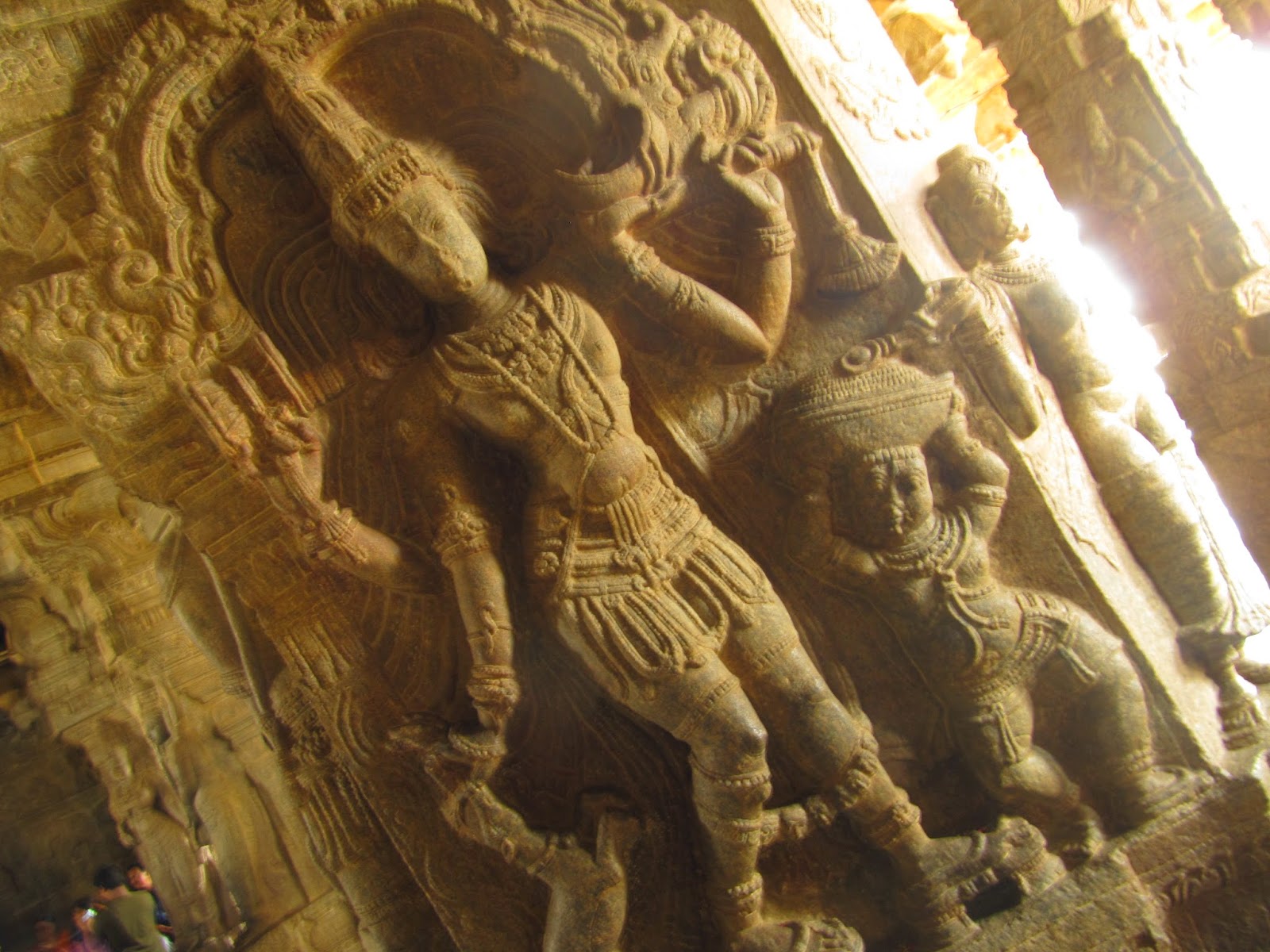 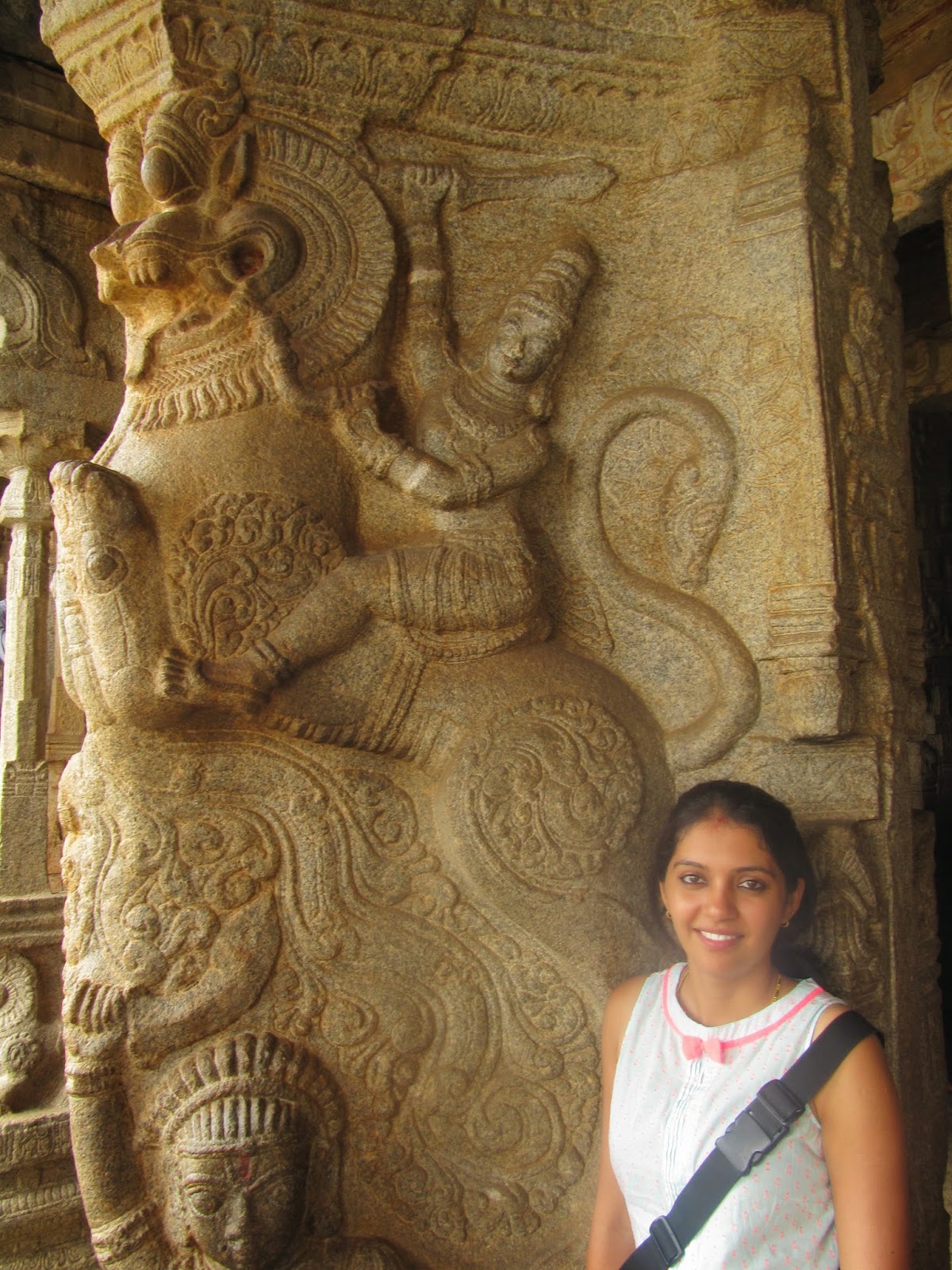 This temple was fully functional unlike the majority of the temples of Hampi, which belongs to the same era. As soon as we entered we synced up with a Kannada speaking guide and its highly recommended to hire one to get to know the details of this place. He took us to the various important places around the temple, explaining the various architectural nuggets and also giving some stories/legends which frankly speaking were too good to be true. 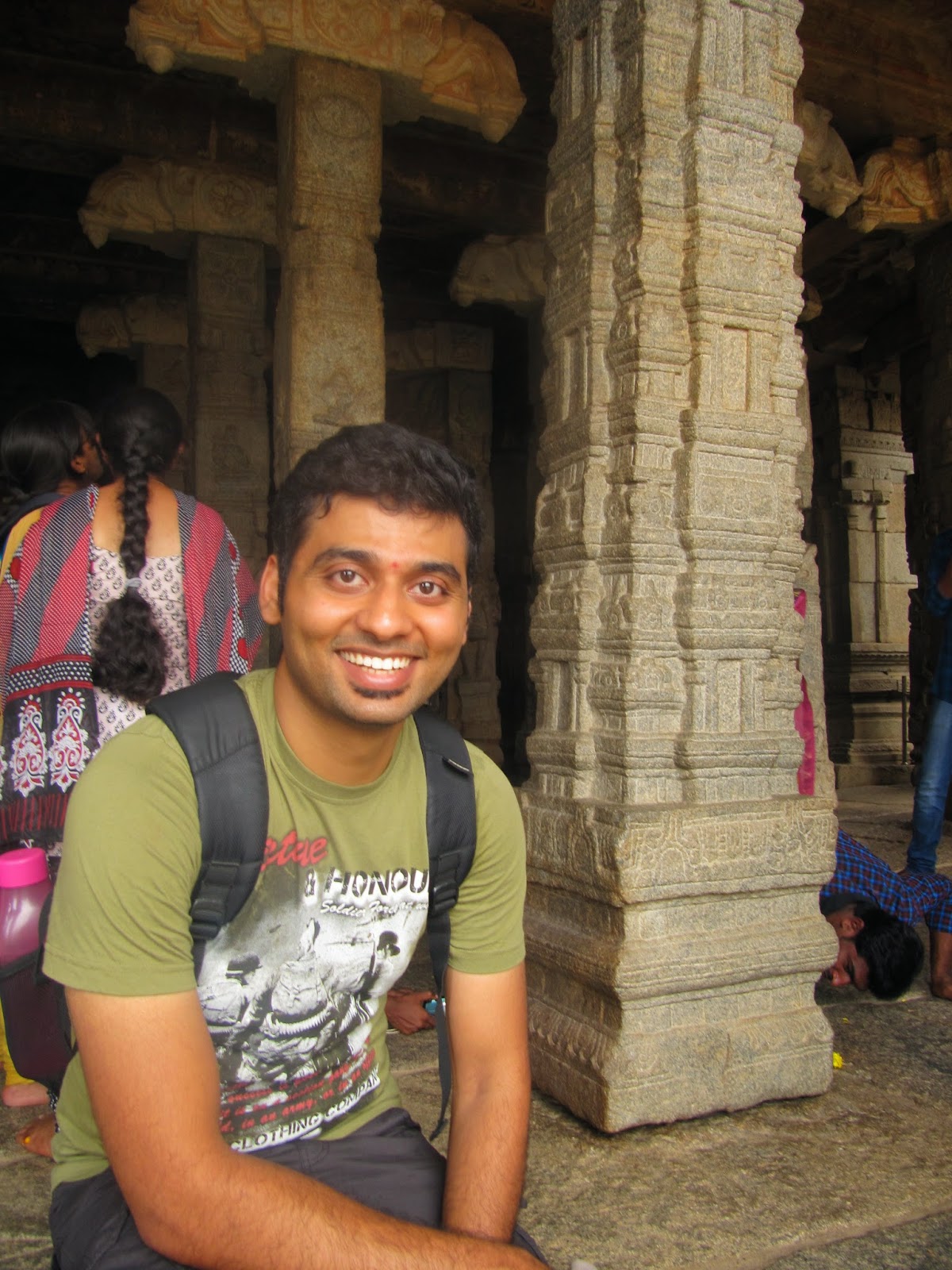 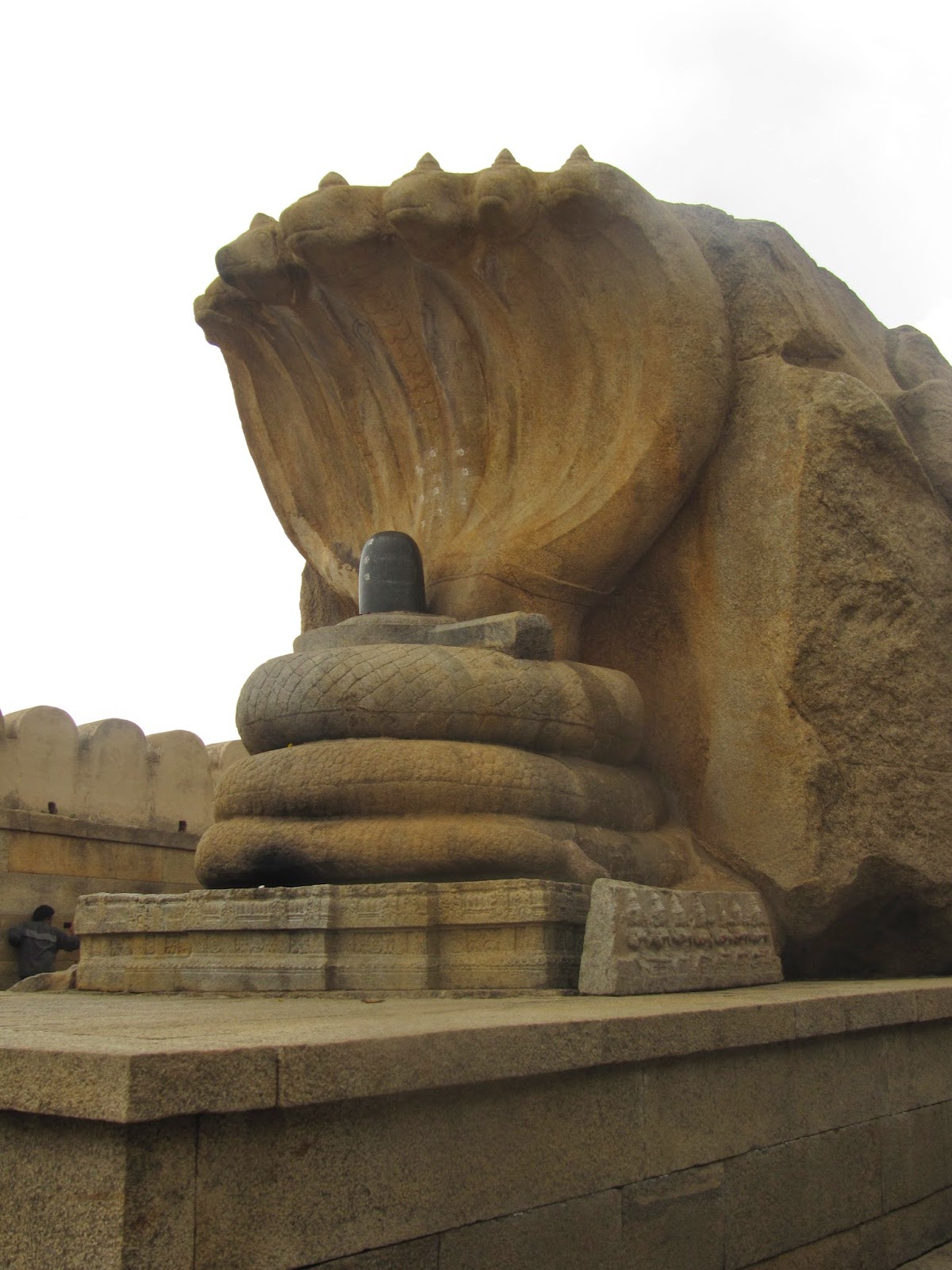 Some of the interesting places shown were the shiva linga with the multiheaded cobra surrounding it. According to legend this was built by the temple artisans who completed it in a single afternoon after they got bored waiting for their food to get prepared !!!!! Just one afternoon ??? Well in that case they could have build the entire temple in just under a week considering the scale and intricacy of their work. The legend of the incomplete marriage hall, which was so because the loyal architect of this temple was questioned by the king for embezzlement of funds. Therefore to prove his loyalty he removed his own eyeballs and threw them on a wall. The guides even show a spot in the wall which is supposed to be dried blood.
The most interesting thing I found here is the famed floating pillars. Heavy stone pillars which have been attached from the roof and having no connection whatsoever with the ground. The guide said that initially many pillars of the temple were of this type , but after a study done by some British team most of the pillars now rest on the ground and only a few are now technically floating pillars.There was even a 3 foot long footprint in the ground which the guide said was of Sita and according to him Sita was 25 feet tall!!!!!! Hmmm... Now they are just questioning our intelligence. 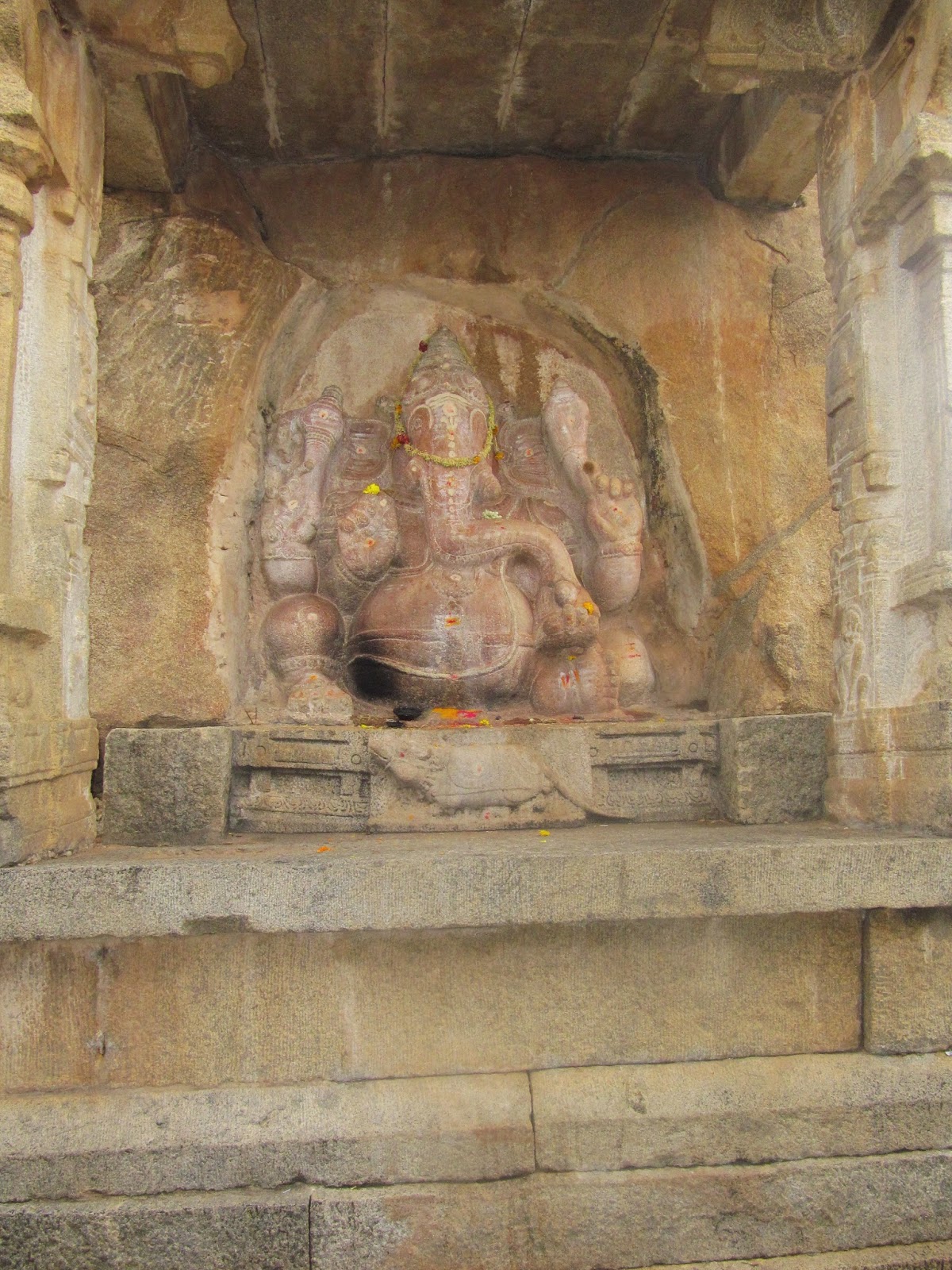 Anyway after spending close to 3 hrs at this place and having darshan at the main temple we returned back after having lunch at the APTDC hotel. Overall I found this place to be interesting since I am a big time sucker of legends and ancient architecture. :)