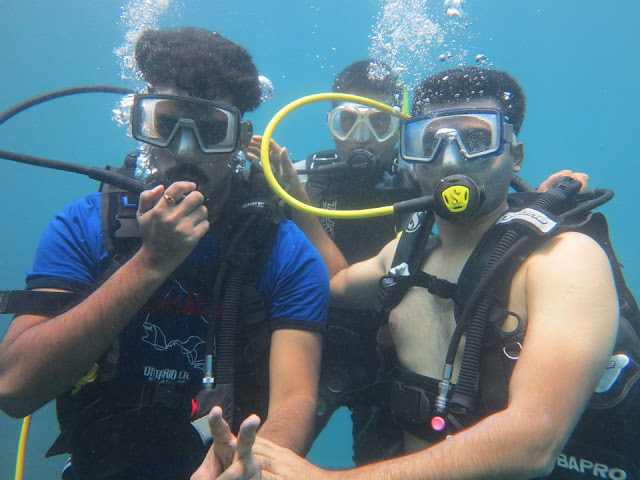 This is pretty much the only thing you hear while Scuba Diving.
"हर एक सांस  का एहसास" (u get to feel every breath) gushes the beautiful Katrina Kaif in 'Zindagi Na Milegi Dobara'. And for once I do agree with what they say in movies. You become aware of every breath you take, sucking in air through a tube and releasing it in form of millions of bubbles, which is pretty much the only thing that is keeping you alive. And the views you get to see is just "WOAAAHHH!!!!", its much-much better experiencing it than what is shown in the idiot box by the channels like Discovery and NGC. A must-try for the adventure loving people. Became such a huge fan of this sport that even planning to become a certified diver sometime next year :).

With a free weekend and Raghu's marriage falling on the same we decided to go for a trip. Shashi had prior plans of running 10K @ Nitte-Mangalore Marathon, hence resulting in combining all the individual events into a grand plan of ours. First was to attend wedding @Sirsi, Second was to go for Scuba Diving @Netrani Island and third was to participate in the 10K run @ Mlore. Got myself registered for the 10K run, reason being to give company to Shashi in particular and for my love of running in general :). Contacted Dreamz Diving Centre  and booked our slots for Saturday (23 Feb 2012), with the fee being 4.5k/head. Since this island is a restricted island one has to get permission from the Navy beforehand itself which is part of the diving package. 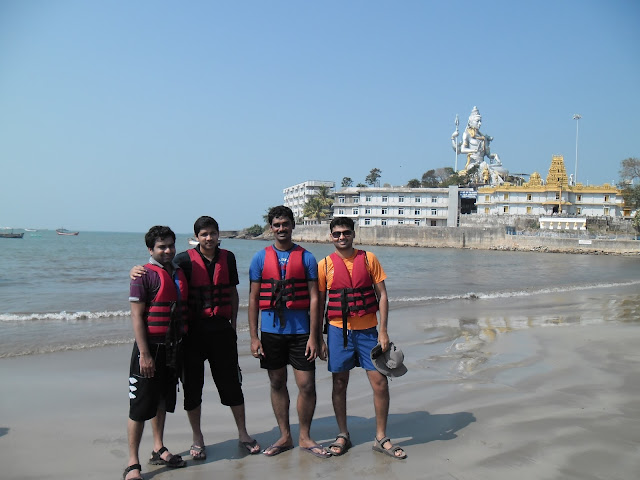 5 of us(Vineeth, Manju,Harsha, Shashi and Myself) left Bangalore on 22 Feb @ an unearthly hour of 4.15 am in Shashi's brand new Chevy Sail hatchback. Since the car was new it couldn't be driven at speeds exceeding 90kmph and this tested our patience when driving in the 4 laned Pune highway.  So much so that I was eager to get off the Golden Quadrilateral and ride in the 2 laned state highways, which was much more fun at these speeds. We got into a State highway near Harihara and from there it was smooth drive till Sirsi. We reached just in time to attend the marriage, enjoyed a sumptuous lunch and it was time to drive all the way to Murudeshwara in a highway kissing the coastline. Reached the place by dusk booked a room in a secluded place called 'Sea Side View Resort'. Roamed around Murudehswar for the rest of evening, chilling out.

Got up pretty late next day since we had to report to the dive centre only by 9am. After reaching the venue on time we got to know that "9am" was the time mentioned only so that people make an effort to come early. One by one everyone of the 19 people registered for the "Discover Scuba Diving" program showed up and we started to our destination only by 10.30 am. The 1.5 hrs boat ride to Netrani Island which is 18kms from the coast is pretty boring, with nothing much to do. But one of the Hungarian dive instructor gave an introductory talk about underwater sign languages, the gear, adjusting body to the depth etc during this time, but unfortunately that lasted only for about 30 mins. Reached the totally desolate Netrani Island , a small hillock in middle of nowhere. In fact this island is used by the Navy for target practice, and hence taking their permission is an absolute necessity. The sun was bright and up , the water was still,clear and dark aqua green, hence making it an ideal condition for diving. Eventhough the water was not totally transparent as in Lakshadweep (within the lagoons), this would do for our first diving session without having to travel great distances. 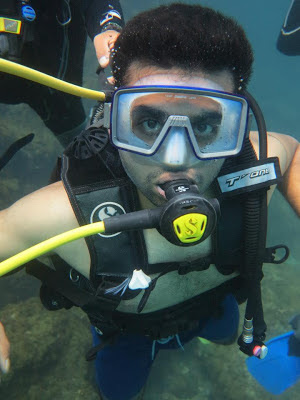 Plan was dive to a maximum depth of 12m(40ft) and the duration of the dive being around 40 mins. Each novice diver is accompanied by an expert diver and one doesn't need to know swimming for this program, with the buoyancy control inbuilt in the diver's jacket making one float effortlessly at a particular depth. For obvious reasons everyone cant dive at the same time since there are only around 5 expert divers, the others were left to do snorkeling which looks like a big joke after scuba diving :D. They called for the first 3 divers and it was vineeth, shashi and myself volunteering within no time. Then started the gearing up process. Couple of fins connected to the legs, a compressed air cylinder in the back with a nozzle to the mouth, a dive mask over the face and a 20kg lead weight belt to the waist. They asked me to get up and sit on the side platform of the boat and to my utter surprise I couldnt even stand up in my first attempt due to all that weight. Finally was able to and then comes the scary part, with the tank facing water and feet inside the boat, they flip the body upside down so that the tank enters the water first. Supposedly a standard diving procedure to avoid the tank weight falling on top of the diver. 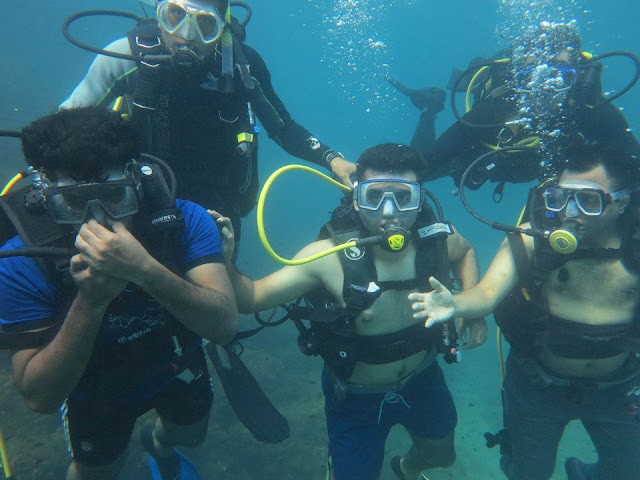 The first few minutes my instructor tried to familiarize me with breathing, clearing the face mask, adjusting the ear pressure as we went down and so on. Once I understood everything it was time to dive. Was initially a bit scared and this resulted in some heavy breathing which snowballed into me thinking that enough air is not getting pumped through the pipe :P. Call it the paradox of fear :D. But after some time got to know the problem, tried to relax and after that it was a smooth ride. Every time we dived couple of meters the ear would pain and I would have to adjust the pressure by just popping the nose :P. Then the beauty of this place started to emerge. Thousands of the fishes swimming here and there , in so many bright colors. 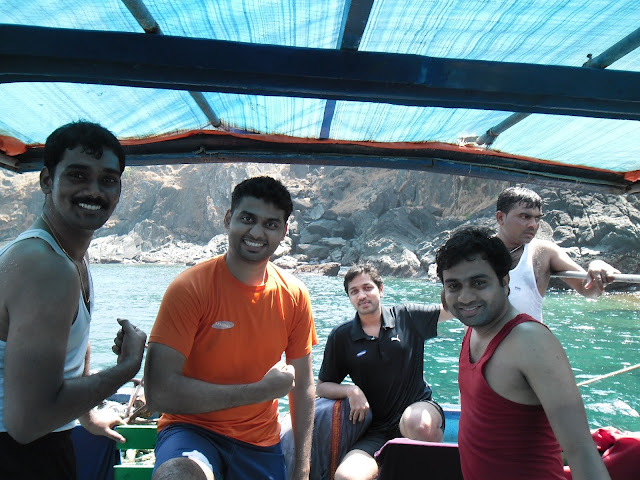 I never expected to see such huge schools of fishes anywhere near to the mainland. Every now and then there would be fish floating just in front of my eyes, blue, green, orange with violet stripes, brown, translucent ....pretty much an endless list with sizes varying from minuscule 0.5 inch to around 3 feet. Felt altogether in a different world, where one is totally weightless and there is no effort to keep oneself afloat. And when one looks up towards the water surface, one is easily spellbound by the rays getting refracted through the water and giving various different light patterns . Was able to descend to the max possible depth of 40ft without any problems, giving a thumbs up for any future options :). 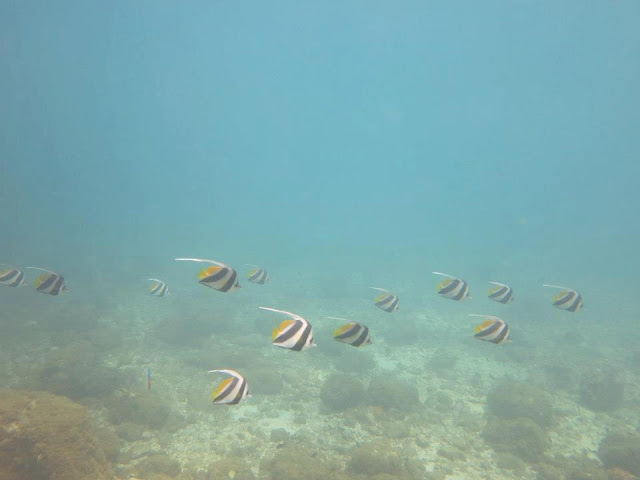 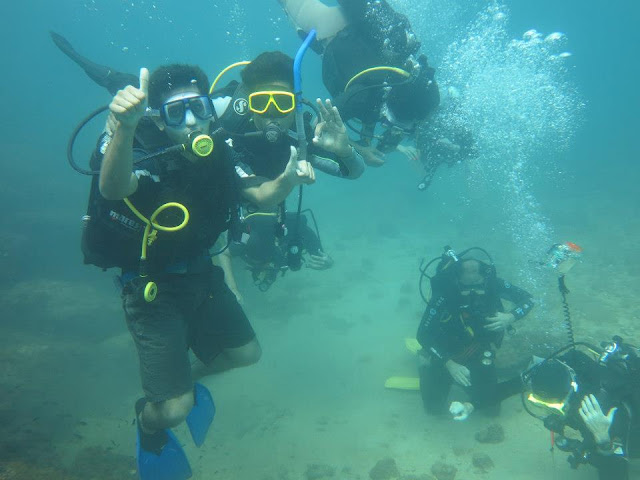 After scuba diving session tried to do some snorkeling and by then it was time to return back. This was followed by yet another boring ride. Reached the coast at around 5 pm and it was time to leave for Mangalore for the final leg. Reached Mangalore at around 8pm and went directly to Hotel Pentagon off Pumpwell circle to collect the BIB and timing chip. From here we went to have our dinner @ Mainland China nearby, thnks to a treat by Shashi. All of us were in shorts, especially me in extra short swim-shorts , attracting stares from a lot of beautiful girls :D. Kinda felt like a girl wearing a mini skirt and getting stares from guys :D :D.  Went to Hotel Woodside @ Balmatta Road and it was time to call it a day. 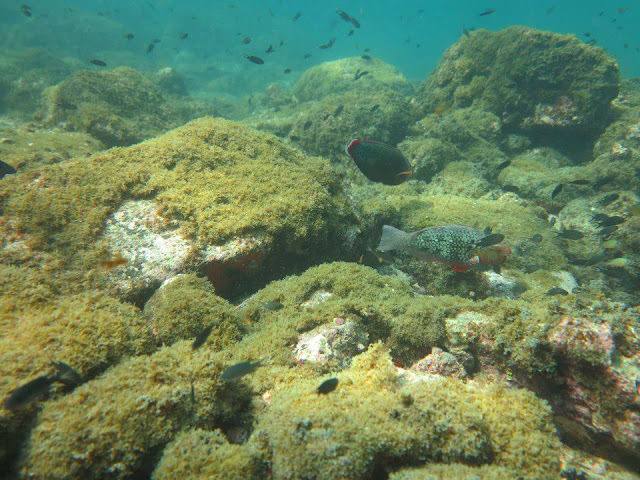 Me and Shashi got up early @ 5.45 am to reach the 10K run destination @ Mangala Stadium. We were just in time and sharp @ 6.40 we were flagged off. Majority of the route was through concrete roads which took bit of a toll on my legs. But the major turnoff running in this marathon is that traffic is not stopped enroute. So that leaves runners nowhere else to run but along with buses, 2 wheelers zig-zaging through traffic. I was like "WTF!!!!!" .Humidity was another factor which took some time getting used to. Apart from that the route had a lot of gradients to be negotiated, making it a pretty tough track. Finally when I was just 100 m from the finish like as per my norms I started sprinting really fast, and this was suddenly cheered by a huge crowd comprising majorly of pretty girls from some local engineering college and this further fueled my final push and I completed my run in 52 min 40 secs, my best 10k finish time. When I say my GPS reading I was really shocked seeing that the last 100m I had clocked a speed of 21.1 kmph :D, my fastest marathon finish ever and u know what some cheering from pretty girls can do :D. 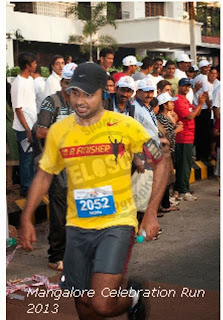 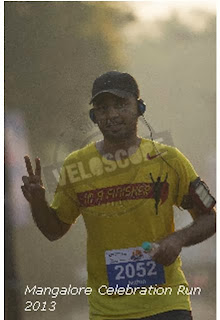 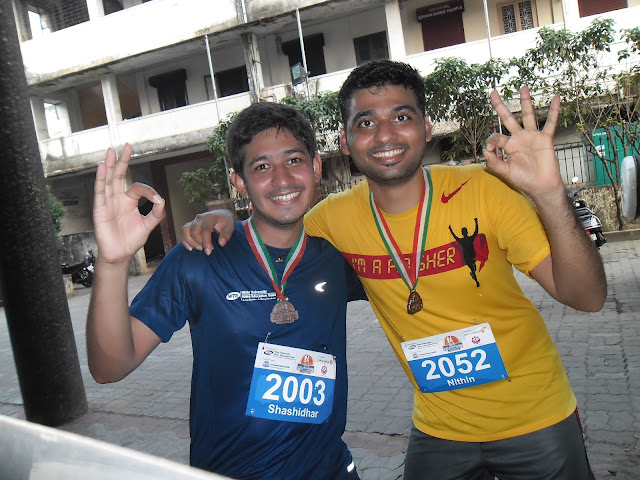 Just before leaving M'lore we had a feast of sorts @ Pabba's supposedly the place for best ice-cream in Karnataka. The return drive was eventless and we reached Bangalore at around 5 pm. Looks like I have one more hobby to be interested in, but to become a certified diver I have to become an expert swimmer, which I am not at the present moment, therefore starting towards my new goal. So that I can dive at any location across the world, with the options being endless :).

Posted by Nithin at 6:40 PM No comments: