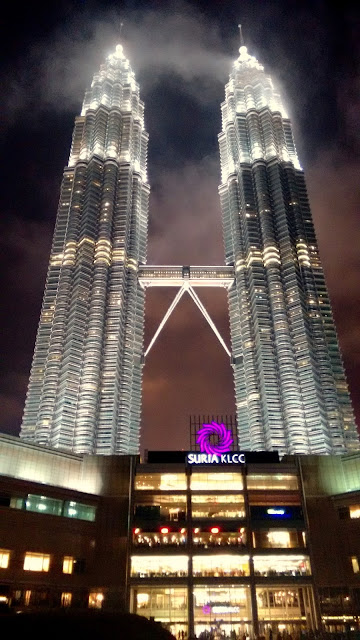 After bringing to conclusion our Singapore leg of the journey, we proceeded towards our next destination, Kuala Lumpur. One piece of advise for those planning to club Singapore and Kuala Lumpur in a single trip is to visit KL in the beginning and then proceed towards Singapore, unlike what we did. Once you are used to the efficiency with which things are run in Singapore, KL appears to be a bit of a let-down. The way the city is run appears a lot similar to an Indian city rather than its southern neighbour. Therefore one would be finding shortcoming in each and every thing right from public transport to local mannerism to general hygiene.


We took a late morning flight to KL from the top of the class Changi Airport. Once we reached our destination we took the 40 min non-stop express train into the heart of KL, named aptly as KL Sentral. KL Sentral is like the Majestic area of Bangalore, THE HUB. You get transport from here to all the places in KL. We took a mono-rail to our hotel in Bukit Bintang, the shopping destination of KL. The plan for the day included visiting the icon of Malaysia, the Petronas Twin towers. Again we took the metro to reach this place via the KL Sentral station and we specifically wanted to view these towers all lit up, hence we reached this place post sundown.


The tallest twin tower in the world looked majestic all lit up against the night sky and a hint of mist floating around the topmost section of the tower. It kinda reminded me of the clouds engulfing a Himalayan peak. We decided against going to the observatory floor since the entry fee is quite steep and there would nothing interesting to view from the observation deck since we would be already inside the most interesting building in the vicinity !!!!. Further we had already visited the Skydeck of Marina Bay Sands and were not much interested in repeating the same. After spending close to an hour in the vicinity of the towers including witnessing the musical fountain we went inside the KLCC mall in search of food. Found a Saravana Bhavan outlet and that settled our search for a vegetarian meal. 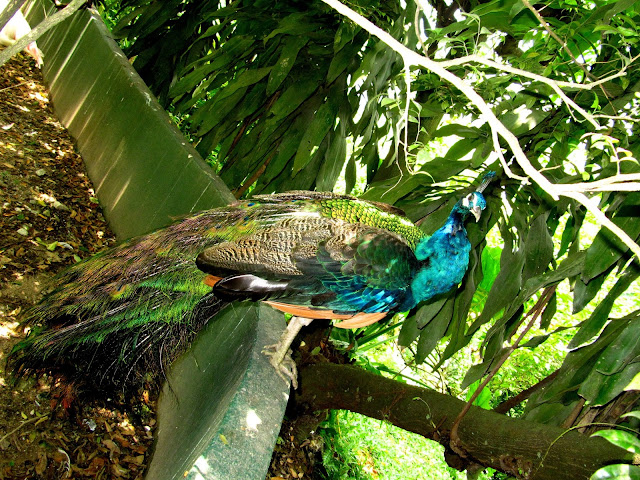 The following day was dedicated for exploring the KL Bird park, Sentral Market and Petaling street. Again we took a train to KL Sentral and from there to Kuala Lumpur station. From there its a 5 minute taxi drive to the bird park. The bird park was just OK and nothing in comparison with the zoos etc in Singapore. There was whiff of stink in the air with all the bird poop in the vicinity. Spent close to 2 hrs exploring this park which included a Bird Show which was mildly interesting, but kids would enjoy it.


From there we took a taxi again to Sentral Market which is one of the prime souvenir market in KL. Its an indoor and air conditioned market and a perfect place to spend the hot afternoons hunting for souvenirs to take back home. One can find all sorts of local jewellery, handicrafts, cloths, accessories and even chocolates. After spending close to 3 hours at this place we moved to Petaling street or Chinatown which is just a 5 min walk from this market. Petaling street is more of a street market with cloths, shoes etc at dirt cheap prices. Post-shopping we waited till the lanterns were turned on post sundown, which was pretty nice. After that we left for our hotel. 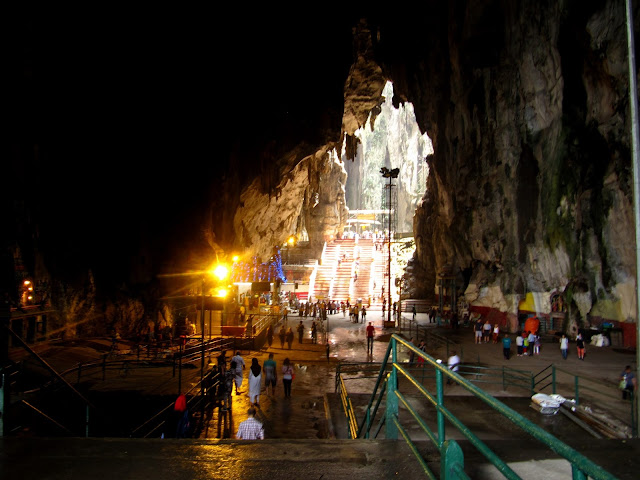 The final day of our trip in Malaysia and we had plans to visit the Batu caves. After checking out of our room we caught a train from KL Sentral which takes close to 45 mins to reach the destination. After that one has to climb nearly 270 steps to reach the top which can be quite taxing.  Batu caves can be logically divided into 2 sections. First is the religious section wherein one can find Lord Murugan's temple within the cave and the other part is the conservation area wherein they are trying to preserve the unique ecosystem of the caves. The temples within the caves were decent and there is no restriction based on ones religious beliefs unlike in Indian temples. But the most interesting part of Batu caves was the "Dark Caves Tour" which involves a guided tour into the restricted conservation area. We were guided by a very enthusiastic and passionate person named as Don and he explained in great detail the fragile and unique ecosystem of these pitch black caves. We found various types of bats, spiders, and other insects along with formation of the stalactite and stalagmite into works of art. This tour lasted almost an hour and it was worth the RM 35 entry fee. 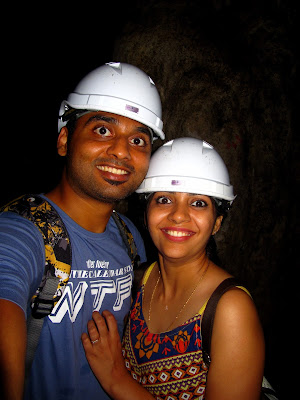 Post the cave tour we returned back to KL. Since we still had some time left before our evening flght we decided to explore the area of Bukit Bintang for some last minute shopping. We came across a restaurant serving authentic Malaysian Veg and organic food and hence we decided to taste the local malay cuisine for the very first time. I ordered a rice dish based on the attractive display photo and after tasting it felt that I still had a long way to go before I start to like South East Asian cuisine :P.  Finally in the evening caught the express train back to airport and hence it was a curtain drop on the Malaysian leg as well. 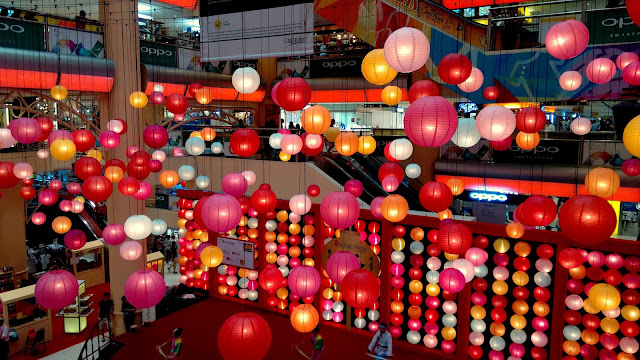 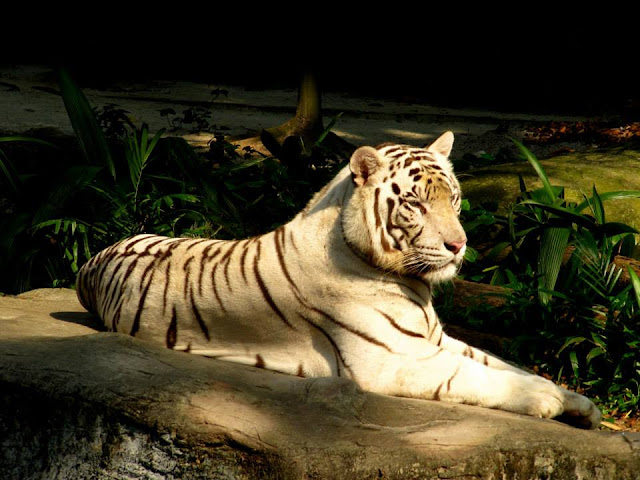 The final day of our trip in Singapore was dedicated for exploring the the flora and fauna parks. The first stop for the day was the National Orchid Garden which is a part of the much larger Botanical Gardens. By now we had become pros in traversing the streets of Singapore using the MRT system. We first took a train to the Botanic Garden station and from there it was a fairly long walk to the National Orchid garden. 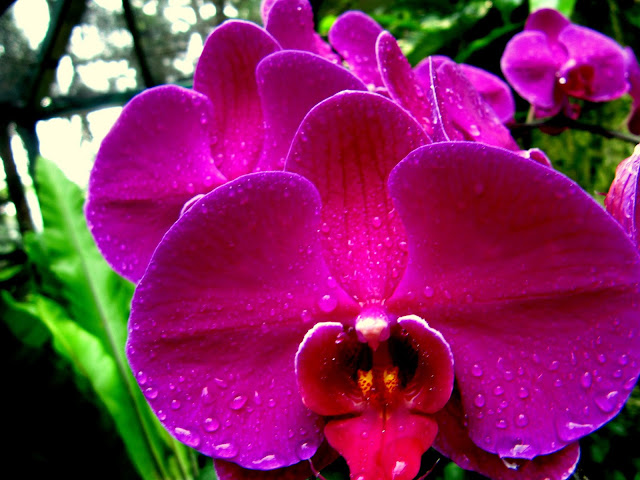 The Botanical garden was huge, but with it being devoid of any flowers, it can be a bit dull looking place. The National Orchid Garden is in complete contrast with its parent and according to Trip Advisor reviews this is the best place to visit in the whole of Singapore. Even the entry fee of $5 is tourist friendly. One can easily spend an hour or two exploring the various types of orchids that this garden has managed to produce. On this particular day it was drizzling and making the walk through the gardens all the more romantic. 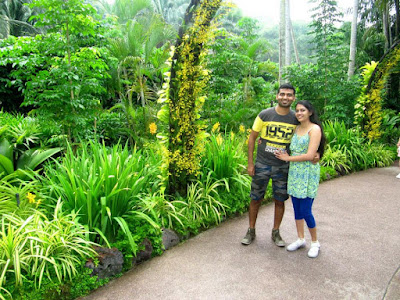 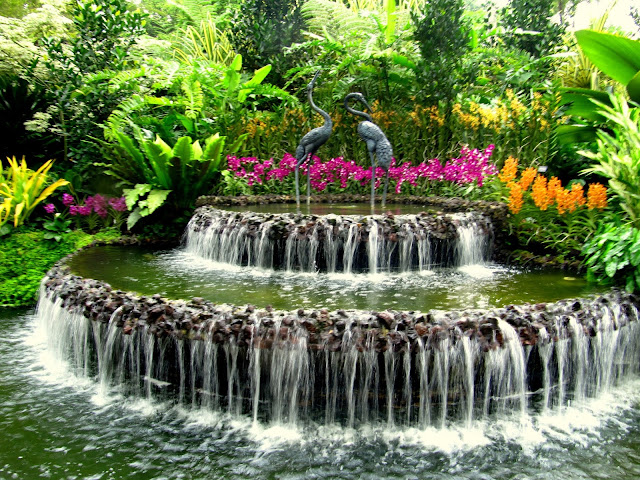 Apart from the various orchids which come in all the shapes, texture and color there was a section wherein certain subspecies of the orchids have been cultured and named after famous celebrities around the world. The only Indian connection we could find was the one named after Usha Narayanan, wife of the former Indian president K R Narayanan. Further there were certain sections of the park which were simulating unique ecosytems found in various parts of the world, such as the mountainous regions of the South American continent wherein we can find the carnivorous plants which feed on unsuspecting insects which get caught in their tubular structured flowers. 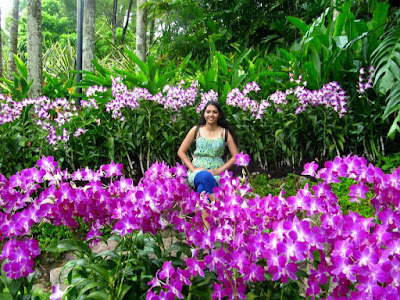 After exploring this unique garden we decided to head towards Singapore zoo, considered one of the best zoos in the world and it actually lived upto that reputation. In the vicinity of the traditional zoo there are other animal exhibitions with different themes such as the Night Safari, River Safari and the Jurong Bird Park. We initially took a train from the Botanic Gardens to Ang Mo Kio from there we caught a bus to the Singapore zoo (details). These attractions are infact the farthest from the downtown areas and one has to consider the significant travel durations to reach these places. We reached this place around noon time. We had decided to visit the main zoo and Night safari post sundown. 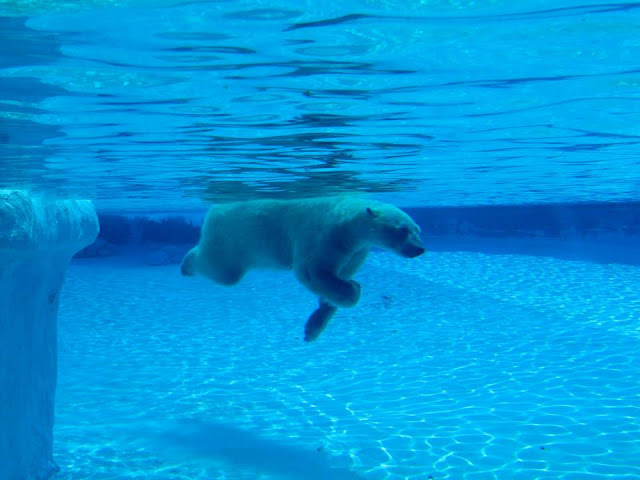 The zoo was unique in comparison to those I had visited so far. It didnt feel like the animals where put up in cages and on the contrary it felt like they were free to roam around. And in fact they did, herbivorous animals were allowed to roam around the park. So one wouldn't be surprised if we came across orang-utans, lemurs, kangaroos etc roaming around freely without any restriction. The other showcase animals were the giant polar bear lazing through its climate controlled pool, a white tiger couple, leopard, cheetahs and so on. We attended shows performed by elephants and a seal wherein the animals  are "trained" to perform in front of a cheering audience. But I cant complain because no matter what , we were still in a zoo. The zoo closes at sun down and from there we moved to the Night Safari area which opens at 7.30pm. 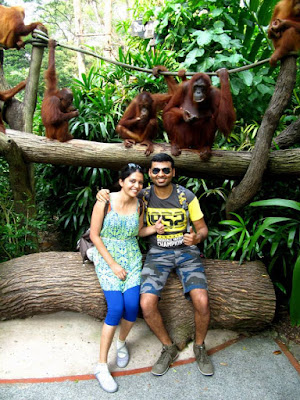 There was a huge crowd waiting for the Night safari area to open up and it was not even a weekend !!!!. We were welcomed into the safari by a couple of tribal fire dancers which was breathtaking. The Night safari can be divided into 2 themes. First one is where they take you around in an electric vehicle around the park. The second one is the foot trails which takes a completely different route than the one taken by the vehicle. We enjoyed both of these sections. The basic premise of this Night safari is to view nocturnal animal behaviour, wherein they are the most active , unlike during the daytime when they just laze around to avoid the heat. Each animal area is illuminated by minimal light , mimicking the light emitted by a full moon, hence one can expect close to near darkness when moving from one area to another. The initial tram ride lasted for an hour, followed by the creatures of the night show where they give educational information on the creatures of the park such as raccoons, hyenas, pythons etc. 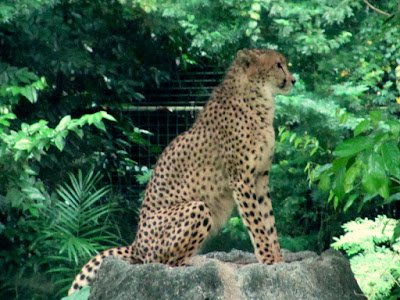 Followed by which we took the foot trail exploring the section of the lions, tigers, hyenas, leopards, wolves, flying squirrels, owls and so on. But the only complaint is that sometimes the lighting will be too dull to view the animals in case they decide to hide away in the bushes. Anyway by the time we were done with the foot trails we were dead tired and it was close to 10 pm and we were able to get a direct bus from here to our hotel in Little India operated by a private entity and costing us 5$ and saving close to an hour over using public transport back to the hotel. 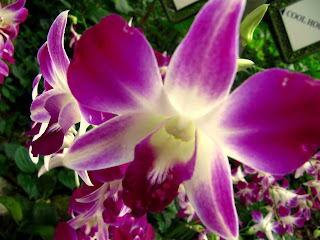