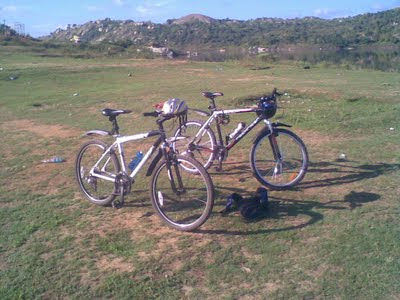 Nearly a year later when we were legally mugged by a group of cops (Supposed to be curfew after 6pm, so got detained and got relieved of all our Ghandhi potraits :( ), I again got an oppurtunity to visit this godforsaken place in my cycle.

During the weekday Raghav proposed that we go the Big Banyan Tree off the Mysore Road. I too agreed. After the initial confusion the date was decided to be 22 Nov 2009 and we planned to leave early in the morning at around 6.30 am. 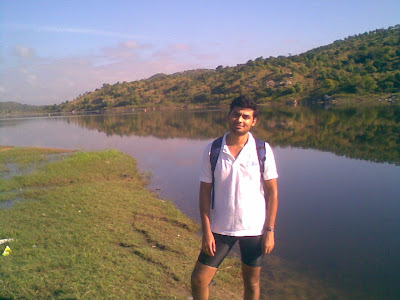 Raghav arrived a bit late we met at the rendezvous point near my house. Hence we moved along the Uttarahalli Road to join the Mysore Road at Kengeri. This morning ride was very good. Be it cycling or biking the morning is the best time (The midnight comes a close second). 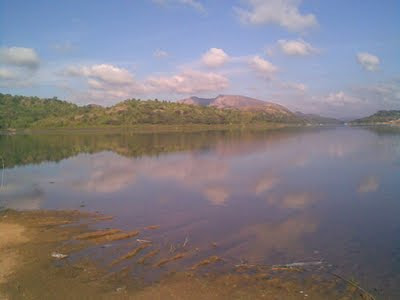 We joined the Mysore road and moved along it. Then around 7-8 kms from Kengeri we took a right at the Rajarajeshwari dental college into a two lane road. The condition of the road was very good till we reached the Big Banyan tree.This has nothing but as the name suggests a very big Banyan tree. The time was just 7.45 am or so. Met another group of cyclists who were going towards Savandurga. After an exchange of pleasentaries they recommended us to go to Manchanabele reservoir supposedly to be around 10-15 kms from that place.

After the Big Banyan tree we took a left at a junction and proceeded in it. The roads were pretty damaged..... more or less it was a dirt trail. But having a mountain bike makes matter much easier in these kind of situation, even though I moved slowly(having a relatively new bike) raghav on the other hand went through this as it was any other road. 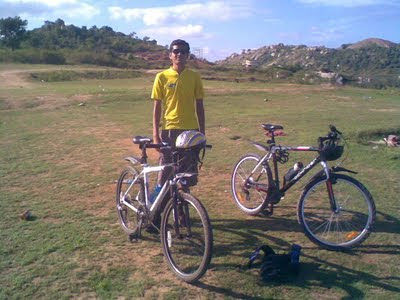 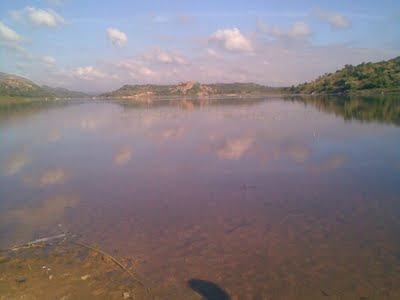 Went by the water, spent some 10 mins or so clicking pics and then left that place. Just after the reservoir while moving towards Mysore road there is huge incline and throughout the entire ride so far this was the toughest one.

Anyway in short the return journey is dotted with pretty steep inclines and add to that the sun out of its hiding place and shining in its full glory resulting in us starting to experience some fatigue. 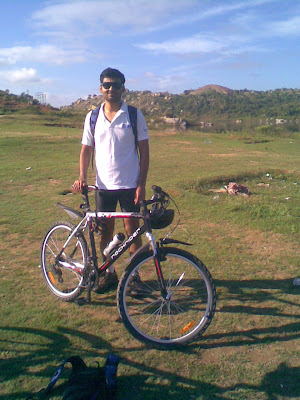 So pedaled at whatever pace that was possible and somehow reached Uttarahalli road via Kengeri and by this time Raghav had ridden far ahead and was completely out of sight. Now nearly 5 km from home I started to get slight dizziness. Thankfully Raghav was by the road side sipping flavoured milk. Within no time I too stopped and ordered a bottle and after drinking somewhat came to my senses. Anyway after that pedaled towards my home and reached at around 10.40 am, taking a total of 3hrs 50 mins.

More or less it was an eventless ride, with high points being chased by 2-3 dogs :P.


P.S.- after getting attacked by a dog once while cycling(still one shot left out of the total 5 shots :( )have now developed a fool proof plan to avoid such situations. The trick is to just shout at the dogs in a very commanding manner and they whimper and stop. Success rate 100% so far :)
Posted by Nithin at 5:12 PM 3 comments:

"Cyclothon - Participate in the Corporate Team Ride" screamed the broadcast mail sent by our companies cycling club. "Hmmm" I thought and went through the mail since I nothing better to do at that moment. The first thing that caught my eyes was the distance of 25km that had to be pedaled, with just the thigh power and nothing else. "You must be joking!!!!".........Having pedaled a max of 20km in a day, that too when in "prime cycling form" in high school I thought it cant be done. Atleast without any training. I removed that subject from my head and had forgotten about that completely.


In a few days a couple of my friends got registered for this event. This again made me start thinking......."well what do i loose in trying.......lets give it a shot". Hence shot a mail and got registered paying 170 bucks for the event participation. The event was to be held in NICE ring road, entry via the Tumkur Road. Also since I didnt have a cycle I preferred to rent one from the organizers.

The organizers had organized an expo in Koramangala indoor stadium where we were supposed to get the BIB number and the more important goody bag :P. It was nothing of an expo as I had expected when we went there, couple of stalls and that's it. Got the bib number and collected the goody bag(got a helmet, cycling backpack, and lots of free stuff related to the event like electrolyte etc...and totally unrelated stuffs like tea bags,soup packets :D).

Then came the race day on 11th October 2009. Had a tough time getting up at around 7am.......4hrs earlier than usual on a lazy sunday morning :P. Got ready and all set to enjoy a good bike(motorized...not to be confused with its more simpler cousin :) ) ride on Tumkur road. But that was not to be the case. The entire road was clogged with some or the other construction work going on along the entire stretch. Moved with snails pace. Was surprised to see some of the participants for the race arriving in the their cycle's just zooming in and out traffic as if a water seeping through sand. I was impressed........it made sense to ride a bicycle in the chaotic Bangalore traffic than riding huge bikes and cars. What you need is 1 foot gap, and considering that the expensive car owners leave about the same or more amount of gap in order to avoid any damage or scratches on their beloved babies and voila you are guaranteed that amount of space for unhindered travel. Even if that amount of space is not available then you can just jump into the footpaths......atleast then someone will be using it , having seen most of the pedestrians walking on the roads instead of footpaths. Also the health factor also comes into play. So what you get is a win-win situation. 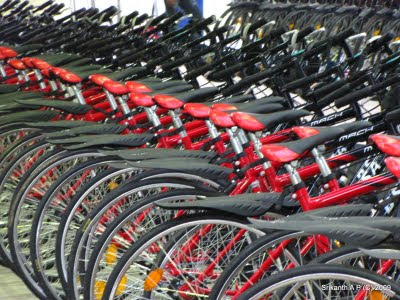 [Rows of Cycles for rent]

Anyway reached the destination(BIEC) at around 8.40 am. Corporate race was supposed to start at around 9 and most of our company mates had already assembled in the hanger. Now I was supposed to hire a bicycle for the race. Went to another hanger and saw a huge rush to get the bicycles. Everyone was in a hurry to get a bicycle for rent , with tempers rising it sometimes led to scuffles with the organizers. Anyway got the receipt for the cycle rent after paying 100 bucks. When I went to collect the cycle I noticed that my BIB number had been exchanged in all that hulla-bulla at the hiring counter. Reassured myself that it wont matter(Since I was pretty damn sure I was not going to be among the top finishers of the day :) ) and collected the bike.

The bike was a BSA Mach without gears. Nothing flashy but appropriate for the task of completing the race. And then I mounted the cycle after nearly 7 years. "Woaaw"....felt as if something was missing between my legs ;), after riding a motorbike for all these years. Even though I have a solid balance, had a tough time balancing the cycle. Anyway after a couple of minutes got control of the bike and was pedaling flawlessly. but by this the time was nearly 9.20 and all my company mates had already started the race(participants were left in batches). So all alone I assembled at the start point searching for a familiar face in the sea of strangers. Found none...........

Anyway off we started the race.......started to pedal with full steam.......atleast wanted to be captured by the press photographers to be splashed across the newspapers. :P. After a couple of hundred meters started the first steep gradient in form of the flyover ramp in order to connect to the NICE ring road. Now the extra fat(or/and muscles) I had gained in all these 7 years started to flash before my eyes . Slowly I pedaled through the gradient. Once again on the level ground I started to gain speed. "Pretty decent!!!!!" i thought I still have the ability to power a bicycle (even though I do some medium distant running in order to keep fit). 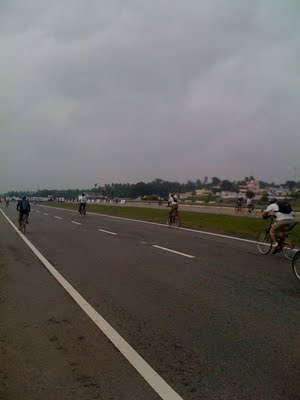 There were a lot of army participants in the race. In the initial part of the race they pedaled with full josh overtaking everyone. But as time progressed I gradually started to gain on them. There can either be 2 explanation for this since both of us were riding the same bicycles........either those army dudes were newbies or that I am tougher than them :D......."keep dreaming" :P...... Anyway after the initial fatigue which I got for mounting the bike after 7 years , the going was pretty manageable. I kept pedaling at a decent pace....on one hand never taking rest or on the other hand never pedaling like a maniac.......just constant pace......

The second stage was more fun.........I started to enjoy the surrounding as my legs were automatically pedaling without my interference. People from all age group were seen cycling......right from students, army cadets, software professionals,retired people,kids, babes :)..........it was as if a giant cauldron stirring people from different walks of life.....Anyway after much pedaling reached back to BIEC at around 10.35 .......The total time taken according to my stop-watch was 69 mins for the 25kms...(22km/hr)......pretty decent I should say for a person who came out of cycling retirement after 7 years :D.

Then suddenly nearly 18 days after the race I suddenly had the urge to buy a bicycle......catalyst of which is still unknown to me.......Called Raghav for some gyaan on which cycle to buy........He initially suggested to go for some Trek cycle.......and I was insistence on buying a local one(read Hercules,hero) since I was not sure for how long this madness(in a good way :) ) was gonna last. Anyway much later he suggested Rockrider 5.1. Did some research....reviews were favorable and the price acceptable. One quote is "One of the best mountain bikes for beginners"......beginner ????...well thats me... 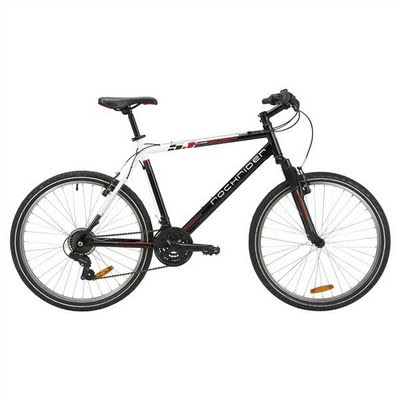 On the first available opportunity went to RR cycle shop in madivala to check out some of the bikes over there...... Had no intention of buying one that day........ Checked out the Rockrider 5.1......looked pretty decent to me.....so decided on instinct to buy it on the same day......Paid around 10.8K for the cycle+accessories(bell,stand,mud-guard,front and tail LED lights, reflectors, chain lock,bottle holder). Rode the bicycle back to my house(around 11 kms from there) and first time experienced the effects of riding the bicycle in bangalore traffic. No gap was too small for the cycle. Initial experience was awesome apart from the problems I had with changing the gears. 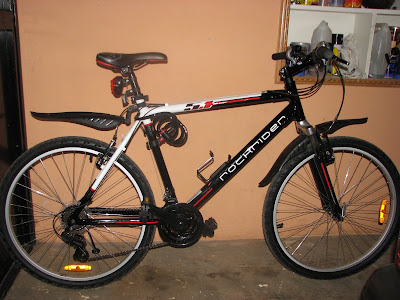 Reached home and after refreshing myself and getting into comfortable clothing suitable for biking went for a ride in the almost desolate Uttarahalli road. This ride was pretty spectacular, as good as riding a motorbike in long endless highways....wind breezing through my ears. Pedaled around 18km in that road amounting to around 28km pedaled in a single day. I am pushing the limits of my body at much greater intervals than Usain Bolt is breaking his own records :D. 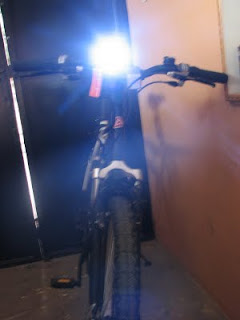 Coming to the bike, it is smooth. Seats seemed a bit stiff in the beginning , but now my ass has adapted to it.Brakes are very responsive. Gear shifts are a bit rough though.......Apart from that its a very good bike.

Anyway nowadays after getting back from work I just head for a ride for an hour or so. Still not sure whether I should head towards my office direction (total round trip will amount to 42km :( ). Think someday I will, atleast once ..thats for sure :P.

(Update 20/11/09)-Encouraged by the half century ride went to office in my bike...covering nearly 45kms(longer but smoother route via inner ring road) 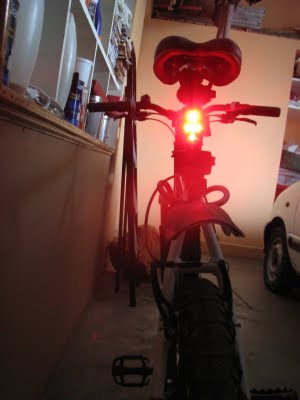