Unearthing The Secrets Of Sharavathi Backwaters 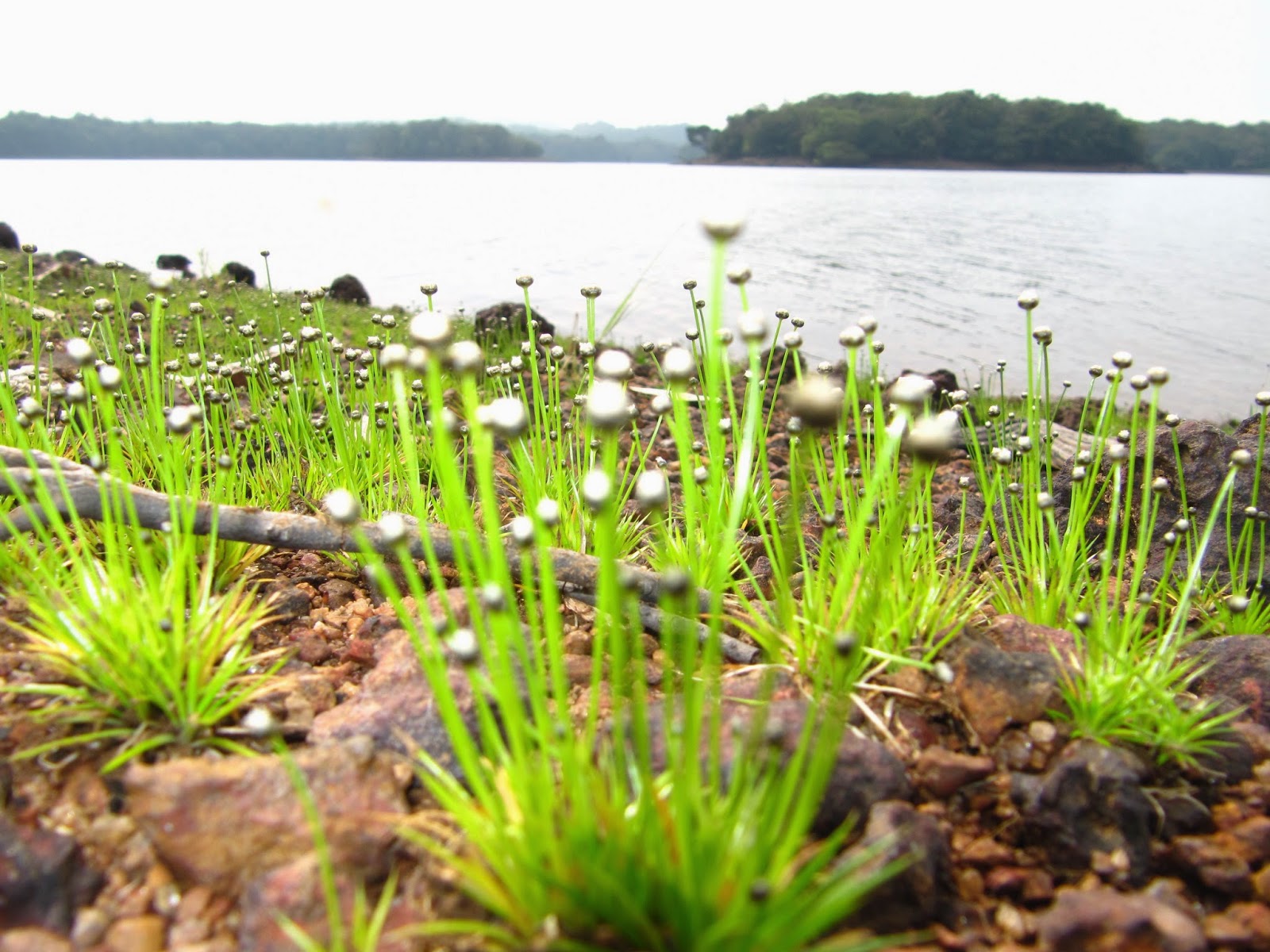 With 2014 coming to an end, something different was planned within the cousins group and it was decided that we would go for a trek/camp considering that majority of the people hadn't experienced trekking and camping in the wilderness. After researching over the net came across this nature camp "package" offered by Sharavathi Nature Trails (aka Sampath Kumar, http://sharavathi.blogspot.in/) which promised us lot of things such as island camping, boating in the backwaters of the Sharavathi river, trekking etc.

[NOTE ABOUT THE ORGANIZER : But sadly this package was one of the biggest disappointments I have experienced in recent times and eventhough I dont resort to personal insults in my blogs I must confess that I found Mr. Sampath Kumar to one of the most arrogant person who thinks that he is doing a great favour to mankind by letting people come on this trip even though he demands 2k/person. Being a travel-freak myself I agree that sometimes unexpected things happen which is not within the control of the organizers, and we have to adjust, but when the organizer (Sampath) instead of informing the people beforehand itself in a manner which is understandable, lets the trekkers  discover for themselves in the nth minute which adds to the frustration and to top it up when we called him up he doesnt want to do anything with it at all and starts to act like a bully. So things like island camping gets dropped, full day of water sports(kayaking/canoeing/rafting) gets converted to a couple of hours of playing in water and surprisingly there was not even a sign of apology anywhere. Our taxi driver (a local), went to the extent of saying that this was a badly managed trip. Therefore I would personally not recommend anyone going via this package. Anyway in this blog I would rather concentrate on the good things rather than ranting about the bad stuff again and again. ] 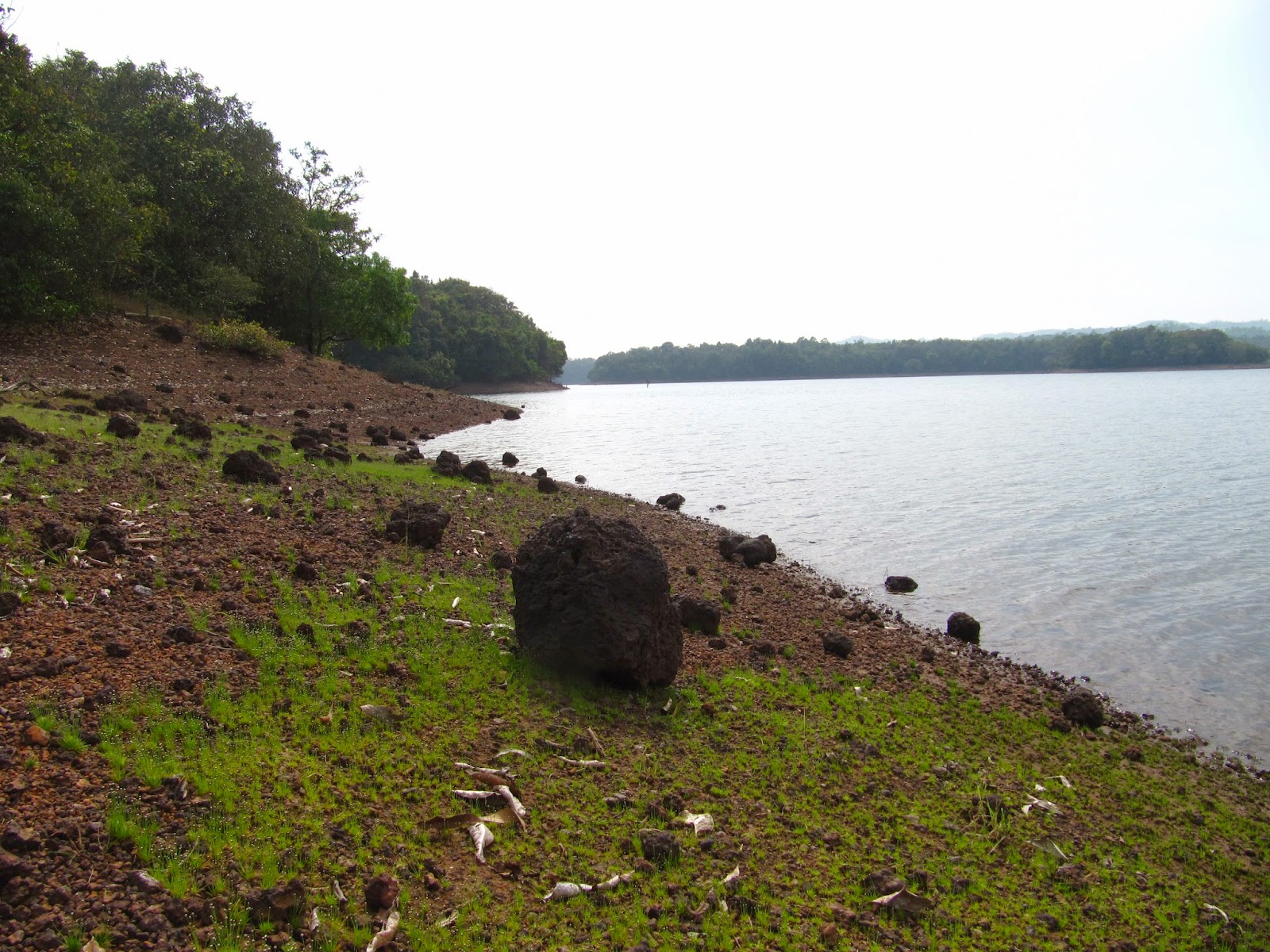 So all 7 of boarded the overnight bus to Sagar from where the local taxi would pic us up. From Sagar the lodging place was around 25kms near Talaguppa and this lodging (Camp Tiger Rock) is situated in middle of an forest with some great bird eyes view of the backwaters. The plan for day 1 included driving to spot from where we would be able to indulge in activities such as kayaking/canoeing/coracle rides etc and camping for the night in an island formed by these backwaters. So after having a good breakfast and travelling for nearly 2 hrs we were let into the quient banks of the backwaters and were provided with the safety equipment such as life jackets. Just then when everyone asked where would the water activities be conducted, we were informed by our guide that it has been cancelled because a DFO was visiting on this particular day and the organizers expected us to spend the entire day just playing in water and without even having a basic courtesy of informing us in advance. Anyway we made the best of the moment having a good time in the group, playing in water. Floating around lifelessly in perfectly still water with eyes closed almost felt life floating in space :), an awesome experience. 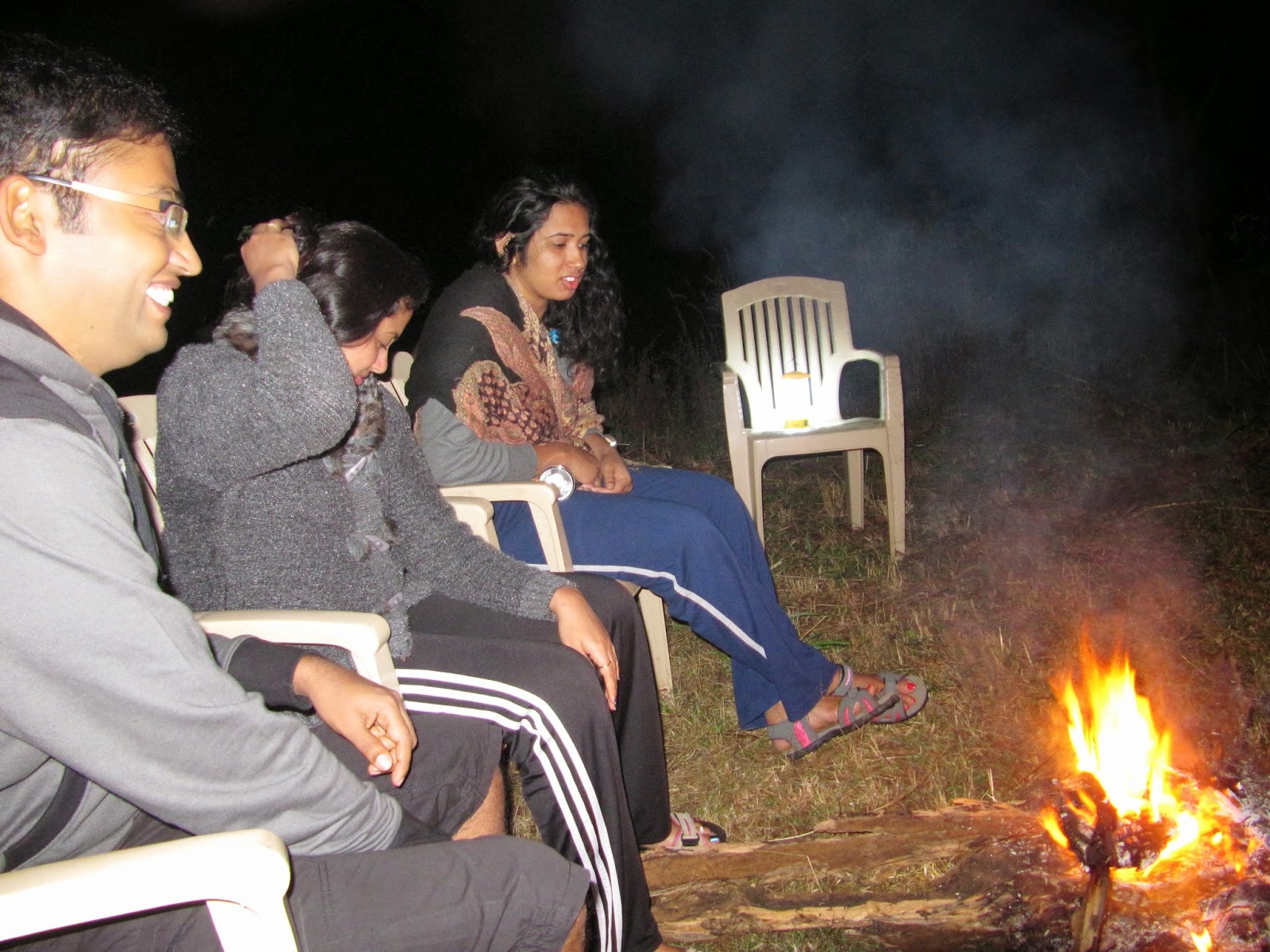 For lunch we were taken to a local tribal home wherein they had prepared a simple lunch of rice, sambhar , papad, pickle etc and we gulped it down within no time. We returned back to the lodge/resort , had some fun around a bonfire and some of us slept in tents to get a feel of sleeping in one. Just then it dawned upon me that it has been exactly 5 years since I went for my first camping trip in Kemmangundi :). 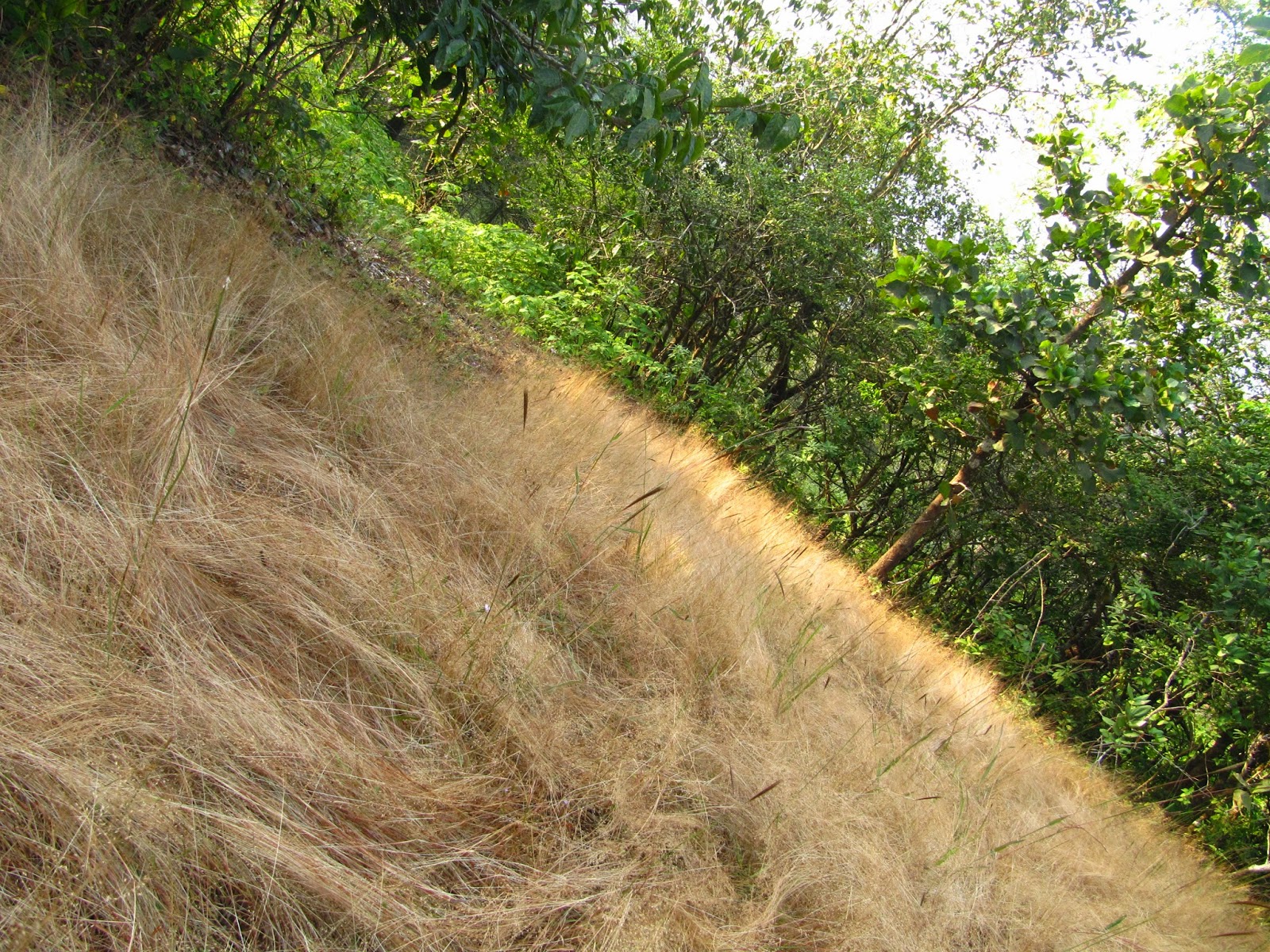 The plan for the next day was to trek to a viewpoint from the resort from where the entire backwaters can be seen and to catch the sunrise. This viewpoint is around 45 mins climb from the resort and it was a decent climb. But unfortunately by the time we got up and ready, the sun was already up and we still trekked to the viewpoint. The view from the top was breathtaking with an birds eye view of the huge expanse of the Sharavathi backwaters and the various tiny islands dotting them. Spent some time at this place absorbing the view and after that got down to have our breakfast and then left for the trekking spot for the day which unfortunately was around 3hrs drive from the lodge. The trekking route would take us to Goodanagundi falls and Bellagundi falls view point deep inside the Sharavathi Wildlife sanctuary. The organizers had all got the necessary forest permissions for our entry to this place and surprisingly there were no other team/individual who was trekking on this particular weekend.


So after a tiring 3 hrs ride we landed at the starting point of the trek. This trek can be graded as an easy one with the entire trekking distance of around 7 kms and with very little steep gradients. But the views especially the sun kissed grass along the way was simply a treat to the eyes. The route traversed through grasslands and super dense jungles and it looked like the route through the jungle hadnt been traversed very frequently. And we had a surprise package waiting for us in the jungles.... Leeches !!!!!!. Leeches in the middle of December in Western Ghats is pretty much of an unheard phenomenon, but unfortunately they were there and so were we :P. This kinda freaked out many of the first timers seeing these squiggly beings latching on the legs to suck on the blood.  Overall by the end of the trek each of us got close to 10-12 bites :P. Apart from the leeches the other wildlife we encountered were a group of wild boars, a sloth bear and lots of colorful butterflies (see the video). 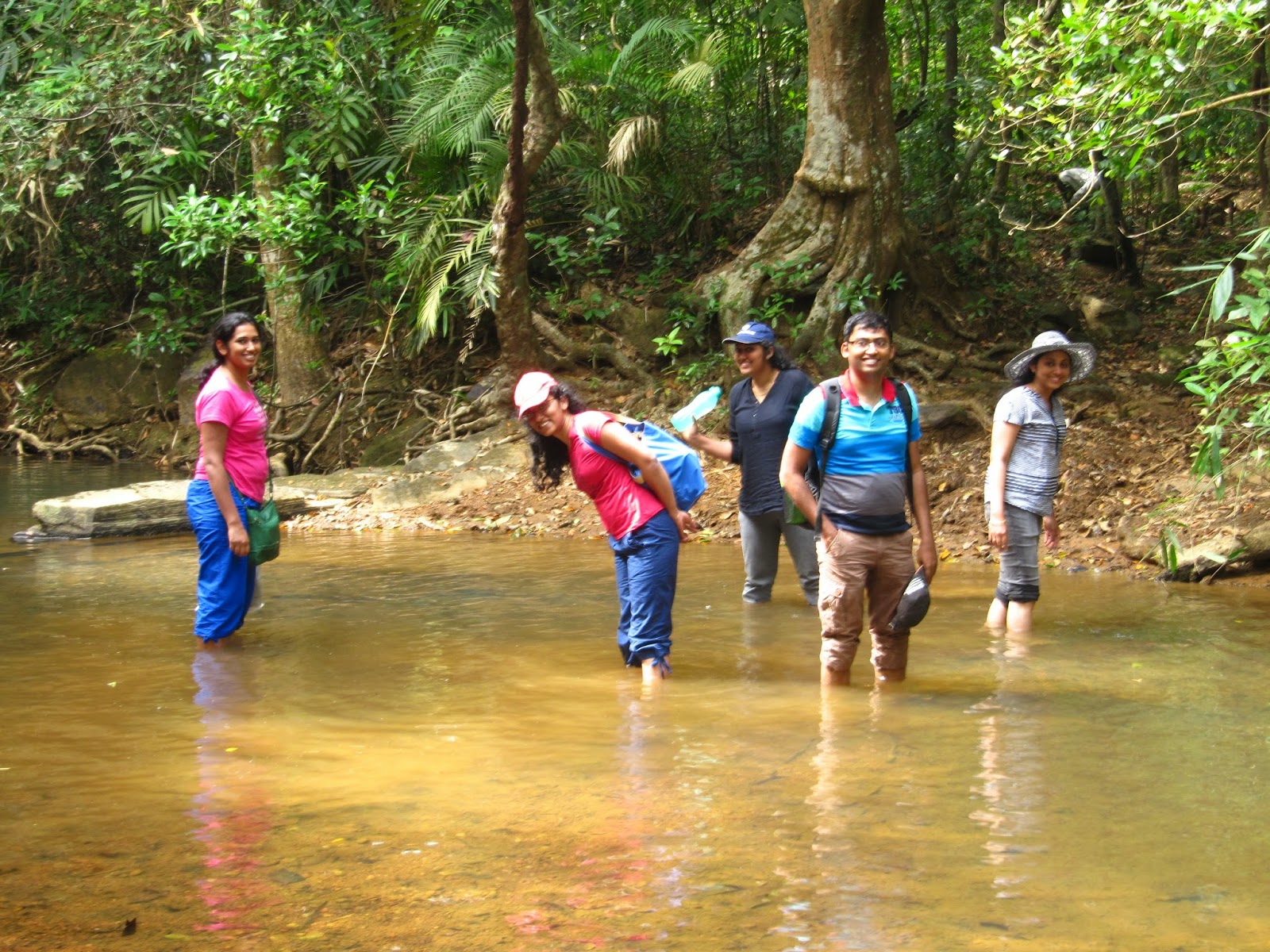 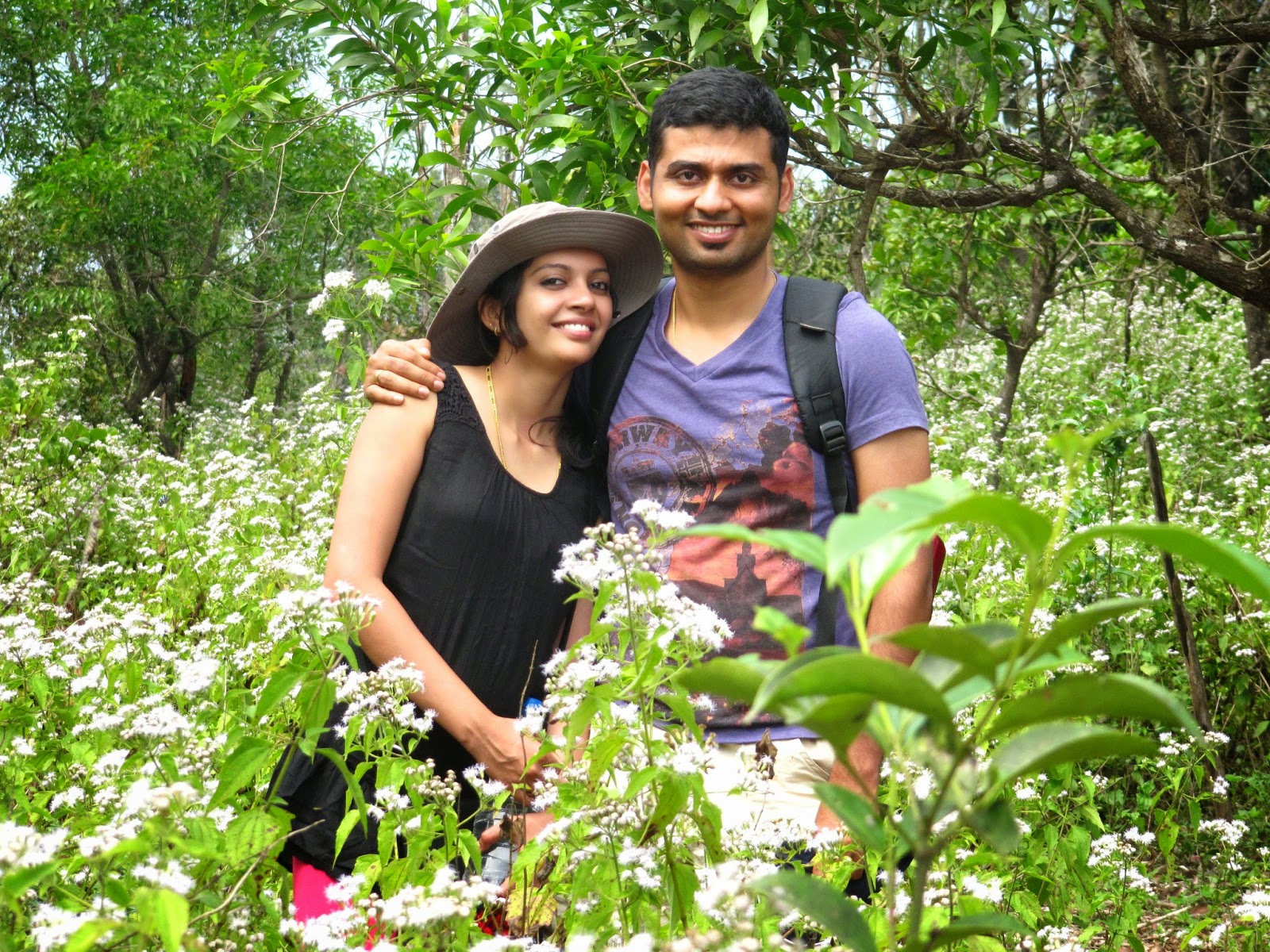 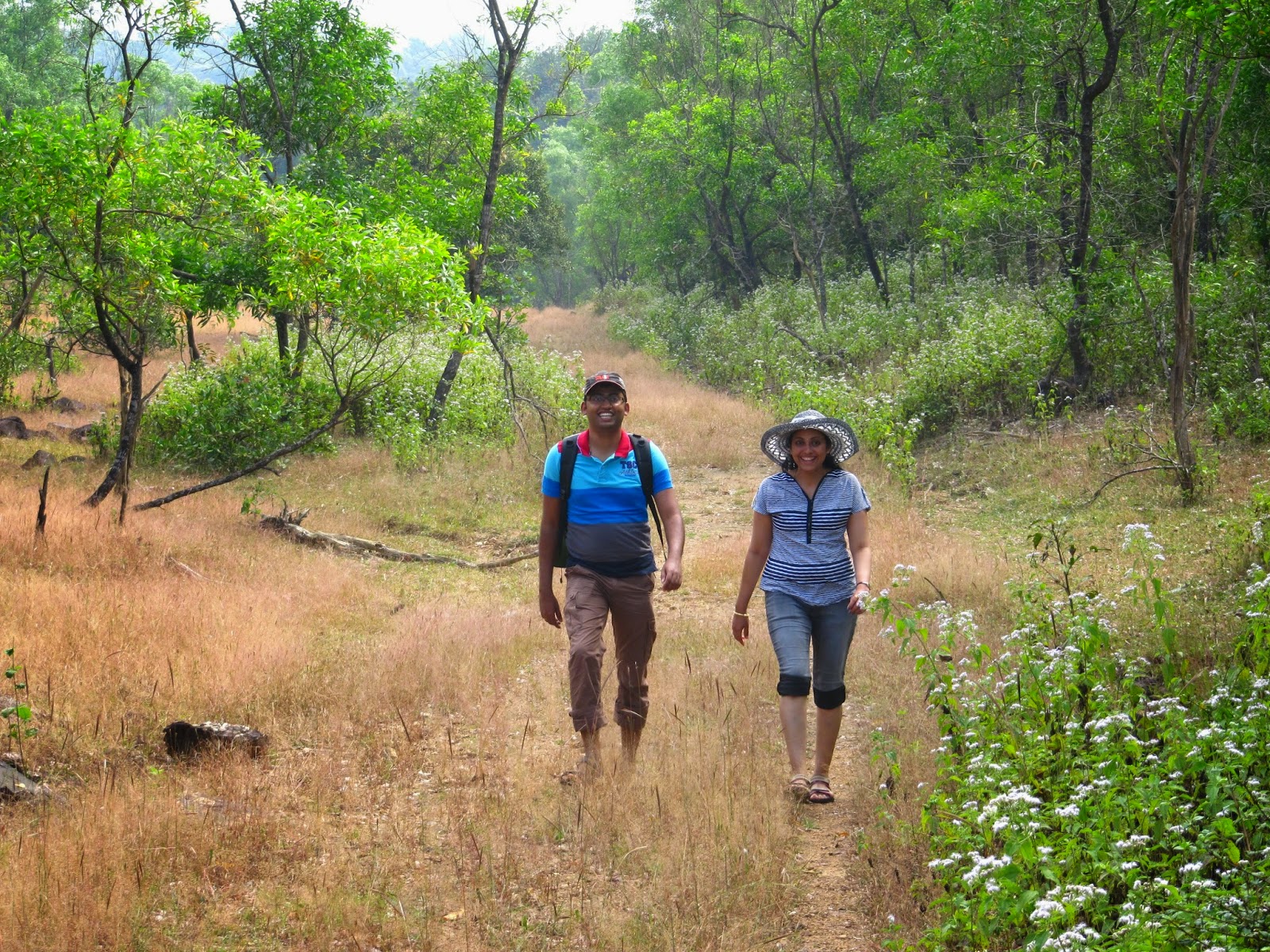 After close to 2 hrs of trekking along the dense jungle flanked by the rivulet we came across Goodanagundi waterfalls, a virgin and an untouched falls. All of us took a shower directly under the soothing water of the falls for some time. Had a simple lunch prepared by our guide and driver and then started the trek towards Bellagundi falls. It was around 3.30 pm and we were already running short on time since we had to catch the 9pm bus back to Bangalore and therefore it hastened our pace to Bellagundi falls viewpoint. Spent just a couple of minutes at this place and we were  back on track towards the place where the taxi was parked. Reached there at around 5.30pm , after spending close to 4.5hrs in the wilderness. After this it was a boring  journey back and we caught the bus back to Bangalore just in the nick of time, hence bringing down the curtains on our first ever cousins trip :P. Apart from the fiasco with the organizer explained above the guides and resort caretaker were good and provided good care, especially the food throughout the duration of our stay. Therefore we ensured we left a good tip for them :). 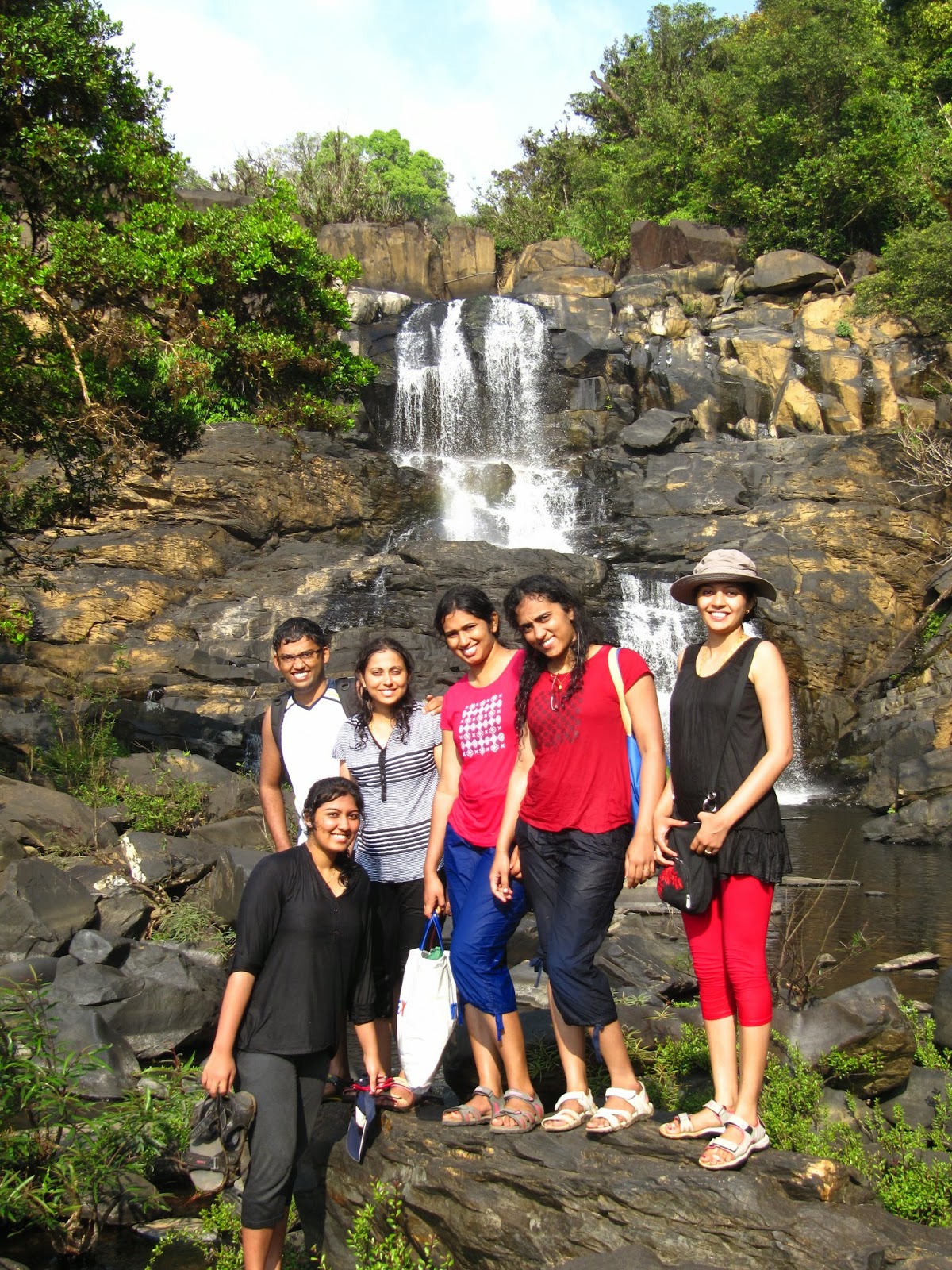 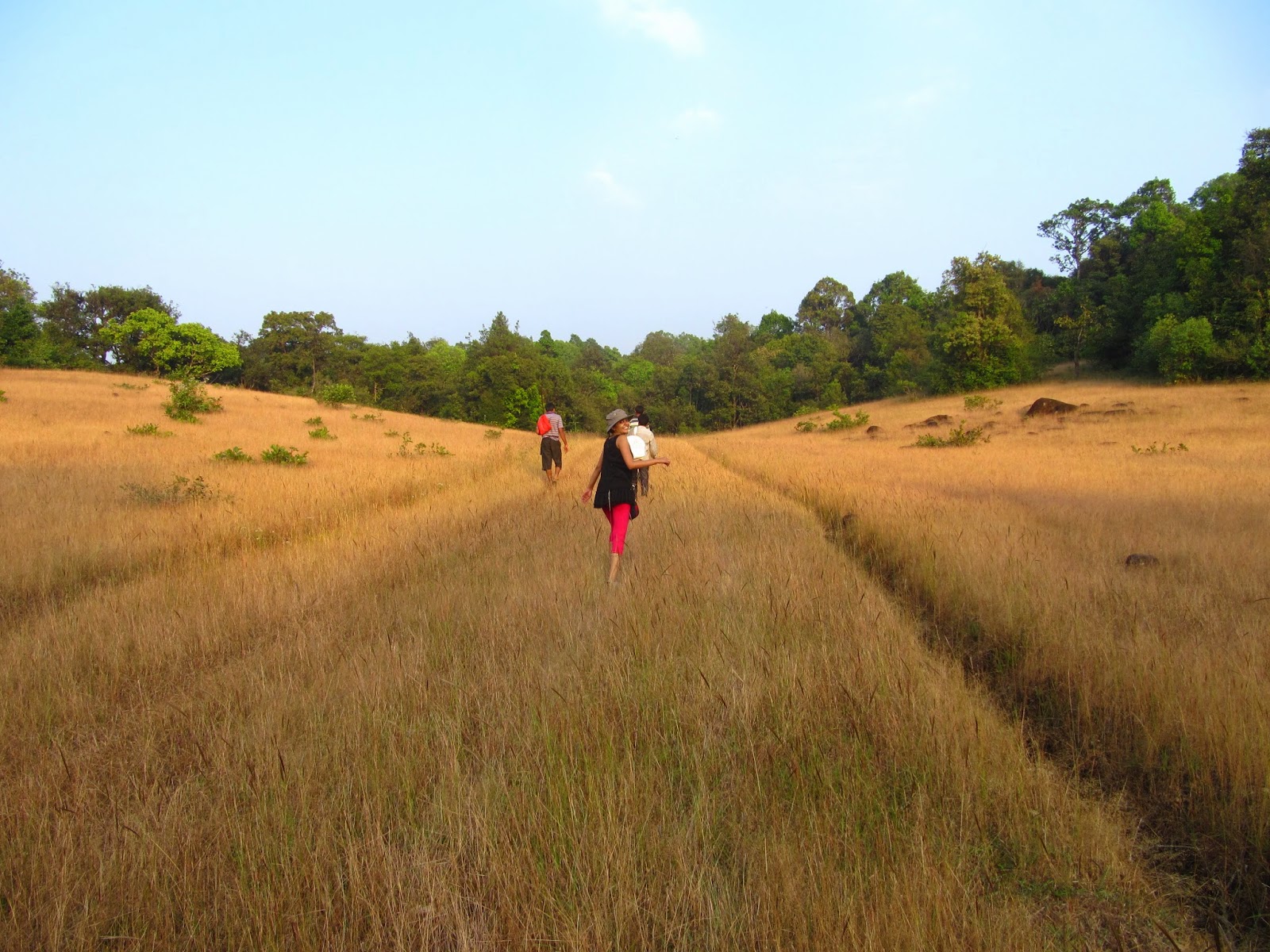 Acting on a suggestion that I should aggregate all my travels into a single page and classify them based on their duration,  I have introduced a new page "Travel Options From Bangalore" with the relevant links to the detailed blogs. This would help those who are exploring their vacation plans and can select based on their requirements. The link is present in the right-hand-top corner of the blog page and I would be trying my best to keep on updating on a regular basis.

http://nithinu.blogspot.in/p/blog-page.html
Posted by Unknown at 11:48 AM No comments:

Email ThisBlogThis!Share to TwitterShare to FacebookShare to Pinterest
Labels: Travels

Offbeat Hangout Spots In Bangalore ..... (P.S For a Couple)

What are some of the offbeat hangout spots for a couple in Bangalore. Apart from the obvious ones like the Malls, theaters, parks etc I have come up with some offbeat ones which are generally less frequented by the general junta who are in search of some alone time :P. Including some tit-bits which would be helpful when planning for the special date with your loved one :). 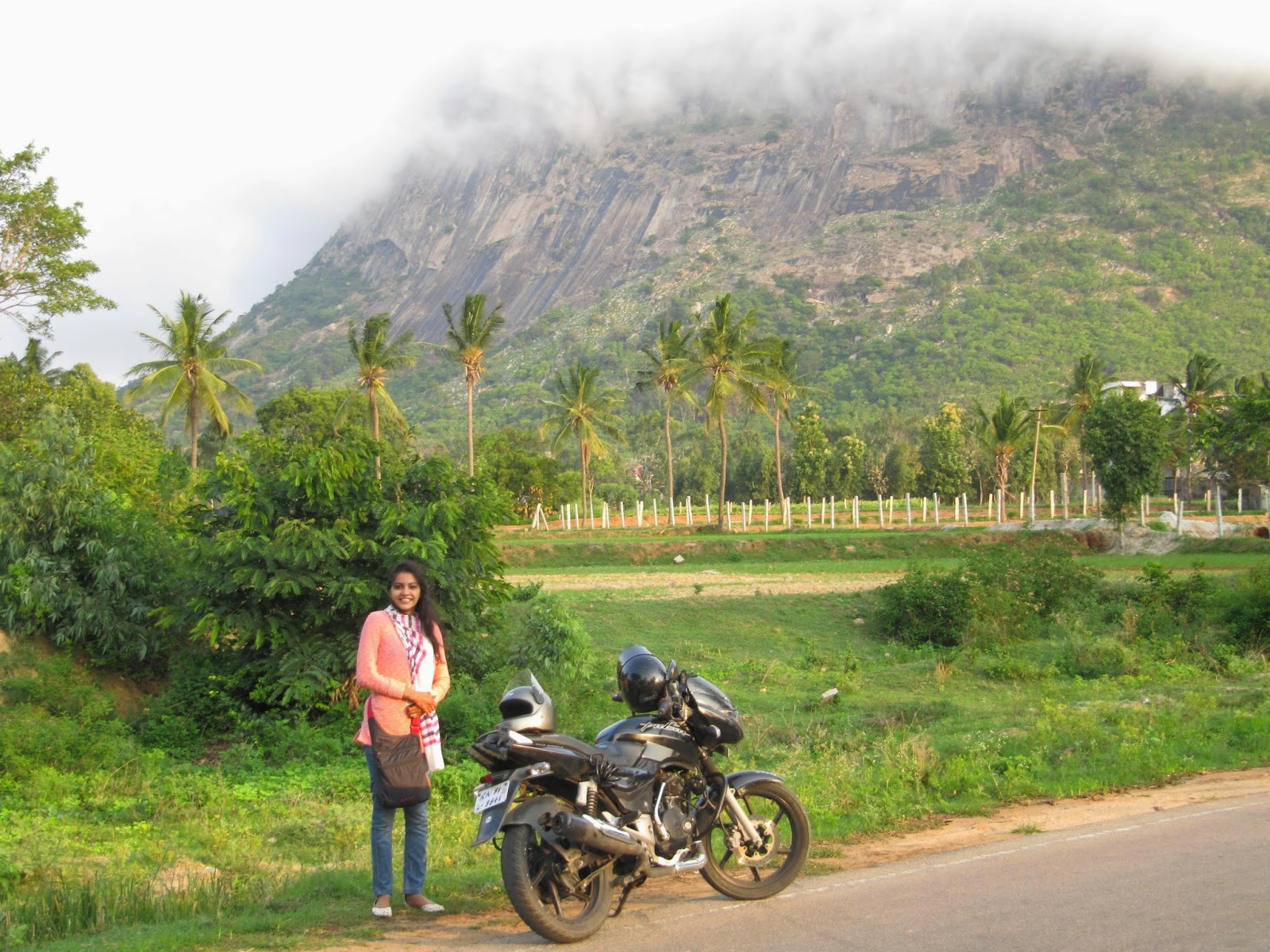 The most obvious answer in the list. But my suggestion is go early in the morning and definitely in a bike. The chillier the better !!!!! :P .  There is very less chances of seeing a sunrise since majority of the time these hills will be engulfed in mist during early mornings and it makes sense to head out with the first rays of the sun keeping the security aspect of a couple in mind. Once there one can spend close to 2 hrs exploring the mist filled park, the temple, Tipu drop. 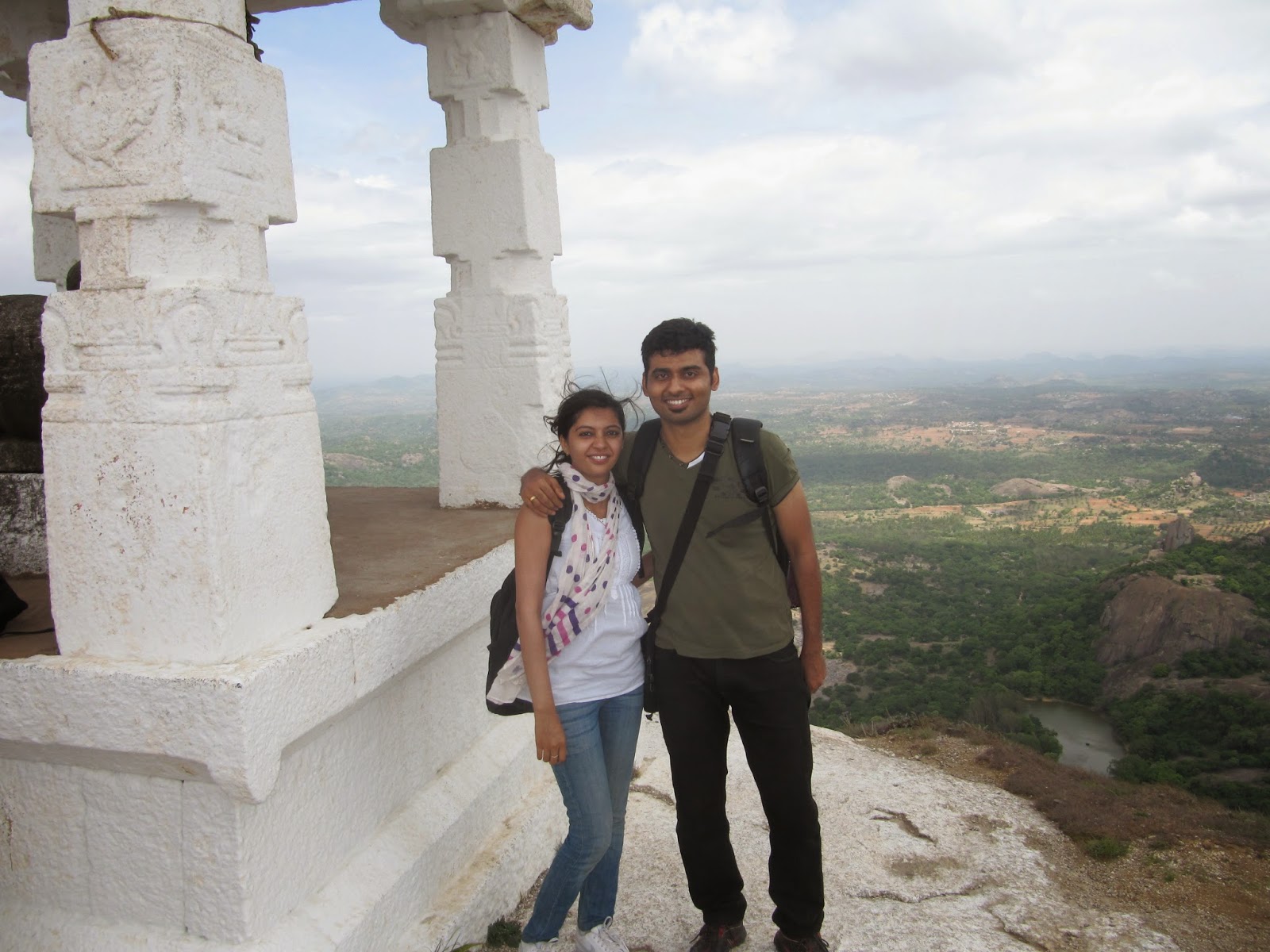 Some time back I came across an article that one should go on a trek with their life partners once,  before they get married. According to the article one gets to know more about their future life partner over a single trek than any amount of meetings over coffee or movies can possibly provide. If you have a trek in mind then I suggest you head out to Savandurga. Its definitely not a walk in the park and therefore it will push you as a couple over the edge. The outcome of such an exercise, you would come out as a team, facing the odds together hand in hand. :) 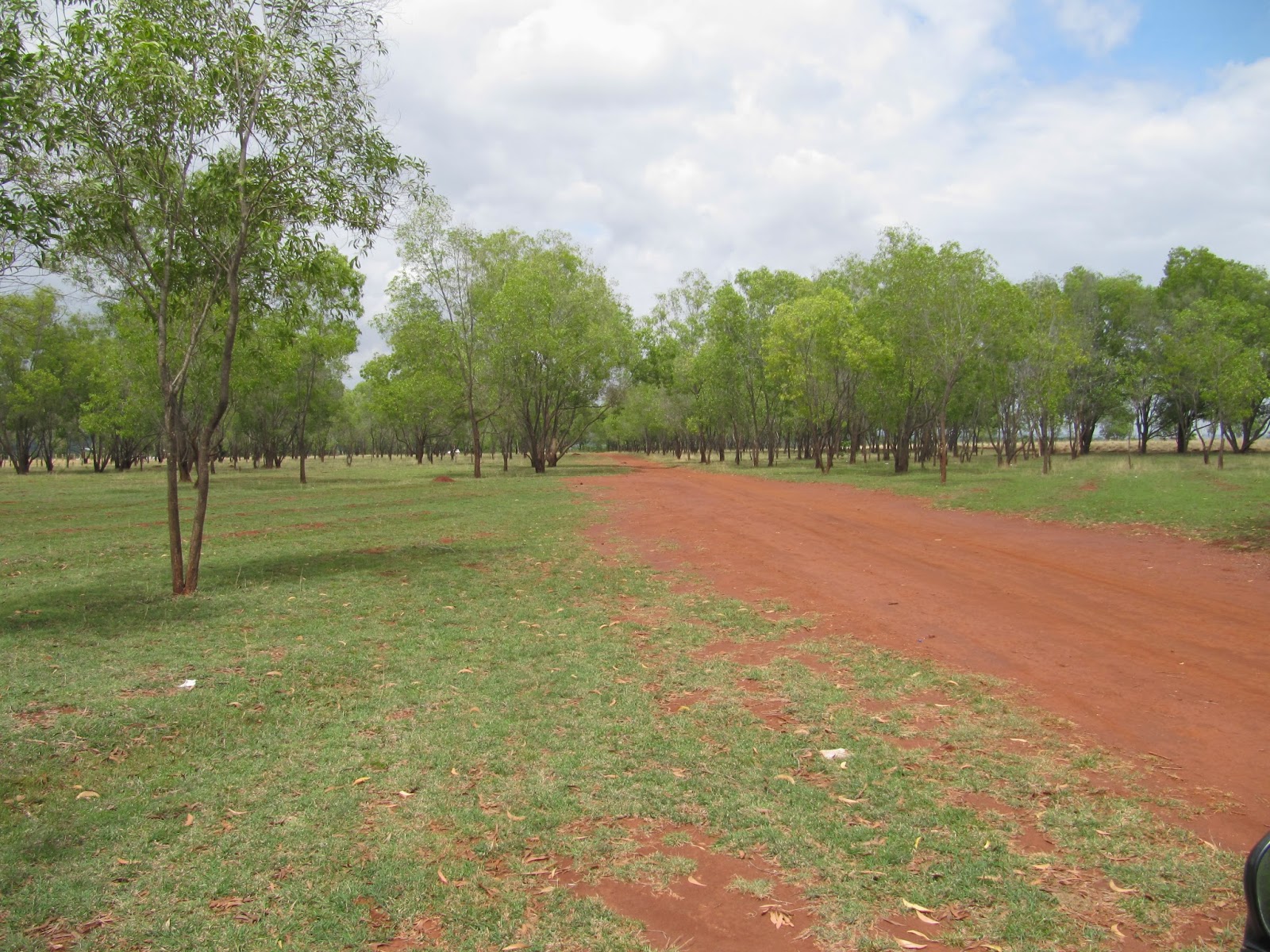 If going for long walks, birdwatching etc is in the wish list, then head out to Hessarghatta for an appointment with nature just in the outskirts of Bangalore. One can go on endless long walks in the dried up lakes surrounded by a carpet of grass and migratory birds flocking around.  But when we were there, a police patrol was cracking down on couples even holding their hands. If one continues on this route they come across Nrityagrama and Taj Kuteera which is at the dead end of this route. After paying an entry fee of 30 bucks one can explore this quaint place. Lot of rustic buildings surrounded by greenery. One can see live classes of various traditional Indian dances like Kuchipudi, Bharathyanatyam and so on.
Further there is a kucha road diversion between the Hessarghatta lake and the Nrityagrama (diversion towards "Our Native Village" resort) which leads to one of my most favourite places around Bangalore. A grassland up till the horizon, see it to believe it :).

Posted by Unknown at 5:11 PM No comments: