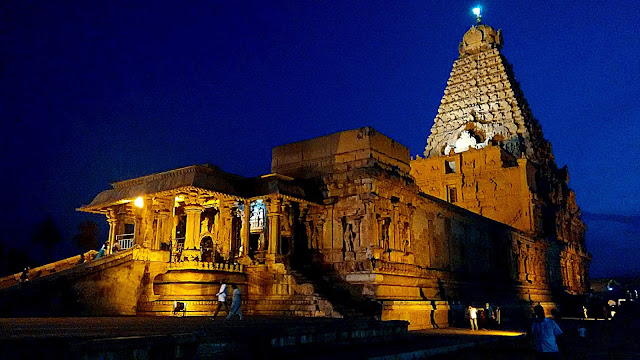 The final stopover of our south India roadtrip was the ancient city of Tanjavur. And this city is predominantly famous for the temple which has entered into the UNESCO world heritage site. This temple along with 2 other temples in the vicinity are collectively known as Great Chola Living temples, "living" because these temple are still functioning unlike majority of other Indian temples which have the  UNESCO tag. We decided to visit only the temple within the city, known as Brihadeshwara Temple or known simply as The Big temple. And yes, it does live up to its tag of the "Big Temple" , because this temple was HUGE !!!!!.

We visited the temple in the evening. Hence we got the day and the night views which were both spectacular. There are many huge temple complexes in India, but I had never seen the main temple to be of such size and proportion. The main temple houses a huge Shiva Linga under the gigantic gopuram. Everything is of enormous size here, glorifying the legacy of the Chola empire. This 1000 year temple has 3 layers of outer walls, each having a spectacular gopuram to enter. There is also a huge Nandi statue right in front of the main temple. By nightfall the temple is lit by huge halogen lamps giving it a completely different feel. One of the must visit places in Tamil Nadu for sure. 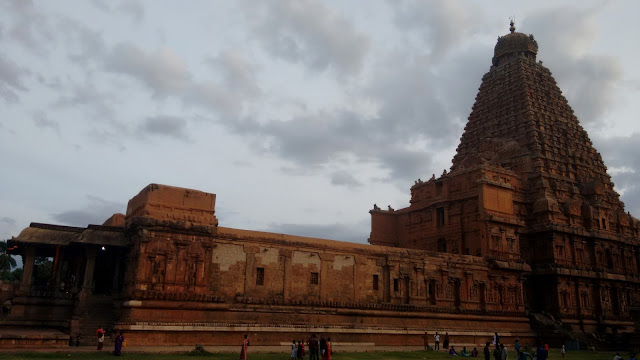 The following day our next stop was the Maratha Palace. Prior to visiting Tanjore I was unaware of the fact that the Maratha Kings had conquered so far south. There are a lot of places to visit around the palace, and it is worthwhile to visit these places only once. First we entered the Saraswathi Library which housed a lot of old manuscripts and had a pretty good collections of books, paintings, coins etc. Second was the Darbar hall, which was not maintained as it should have been. There is a museum. Some sections of the museum were pretty decent, but the other sections had completed gone to the dogs, especially the hall housing the huge skeleton of whale. There is a huge bell tower and unfortunately one is not allowed to go up. Sadly there was graffiti everywhere and it was heartening to see the off limit areas free from these pests. 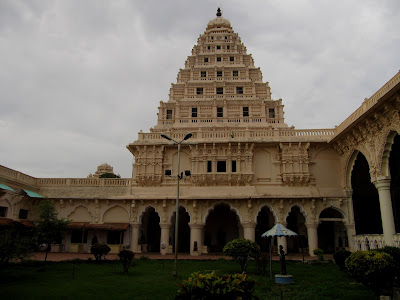 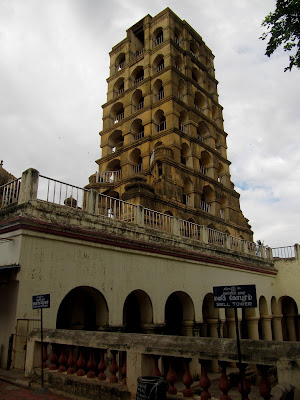 We left Tanjavur and started our final leg towards Bangalore. But not before we made a detour to Srirangam near Trichy. Srirangam is one of the largest temple complexes in the world, second only to the Angkor Wat and that makes it the worlds largest functioning temple complex. Moving from one of the largest temple in the world to one of the largest temple complex in the world :). The temple has 7 concentric walls which needs to be crossed to enter the temple. But even though the sprawling Vishnu temple was huge , there was no wow factor like the Brihadeshwara temple in Tanjore. There are temple after temple inside this complex and the whole architecture seemed a bit haphazard and not grandiose. And having been already saturated with an overdose of temples during this trip, we didnt spend more than an hour at this place. And finally it was a long drive all the way back to Bangalore , with the some good roads enroute !!!! 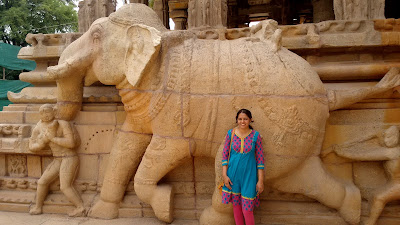 Posted by Nithin at 7:57 PM No comments: 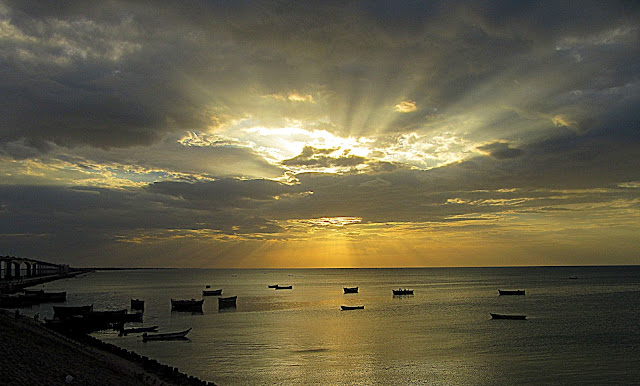 Rameshwaram was the showstopper of our South Indian road trip. If given an option to cover just one place during this trip, then it definitely would be this place and this did meet our expectations. The good thing about this place is that the journey to this destination and the destination itself are top notch. We took the Kashmir- Kanyakumari Highway till Tirunellveli and from there took a diversion towards Rameshwaram. The roads are totally deserted in terms of vehicular traffic, a complete contrast to the highways through Kerala. Yet it was quite scenic with endless salt fields on both sides of the highway. Eventhough from google maps it looks like the route goes along the sea, one hardly gets a chance of driving with a sea view. Unless , ofcourse you reach the great Pamban bridge !!!!

Pamban bridge is one of the most circulated images within India for the purpose of tourism and it does have those elements which makes it picture perfect. Legally speaking no one is supposed to stop on top of this bridge, with multiple boards advising the same, but we saw a huge line of vehicles parked and this temped us to do the same. We stopped only for 5 mins before a police patrol car came in and ordered the vehicles to be cleared. Fortunately by this time we had already experienced the view from the bridge. Shouldnt the Govt make provision for the tourists to view one of the best scenes in Rameshwaram, I hope they do some arrangement in the future.

The first thing we did was to go to the main Ramanathaswamy temple, which was huge, supposedly has the longest corridor in the world. It seemed like we walked atleast a km from the temple entrance to the main deity :P. The temple interiors were very good and interesting. There are a lot of holy theerthams in and around Rameshwaram wherein one is supposed to take a dip to get blessed. We saw a lot of pilgrims doing the same. After exploring the temple we proceeded to our hotel (Jiwan Residency), a recommended hotel to stay in Rameshwaram.

The following day it was time to explore Danushkodi. It is famous as the Rama Setu which according to mythology was build by Rama in order to reach Sri Lanka. The roads from Rameshwaram are very good till a check post wherein we had to abandon our private vehicles and had to get into rickety 4x4 vehicles. This vehicle takes a semi solid terrain route via marshlands which cannot be crossed by normal vehicles to reach the "Ghost" town of Dhanuskodi. But there were 2 surprises in store for us. First, was that there was a perfect all terrain road all the way to the town, but apart from the locals no one was allowed to use it. Looked like a collusion to force tourists to buy tickets to the 4x4 rides. And second being that Dhanuskodi is no longer a ghost town and is being inhabited. Dhanuskodi is infamous as the town which got washed away in the cyclone of 1964, which also included an entire train.

The beaches of Dhanuskodi are gorgeous and we had a great time exploring the ruins of the village, including church, post office, railway station and so on. It was a fun ride through the marshlands. This excursion to Dhanushkodi took close to 4 hours of our time, but it was totally worth it. From Dhanushkodi we started to search for the infamous floating rocks of Rameshwaram. First we went to the Gandamadana Parvatham in search of it. But alas we couldnt find it here, but we got some good views of the entire Rameshwaram island. Next stop was the 5 faced Hanuman temple. It was here we stuck gold, with the floating stones. But the fact is the floating stones are nothing but porous pumice stones covered with corals, which gives it the ability to float. But the touts at this temple were making a quick buck selling poojas to the gullible . 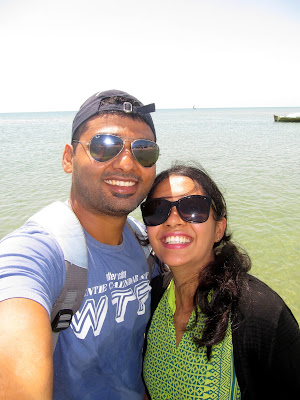 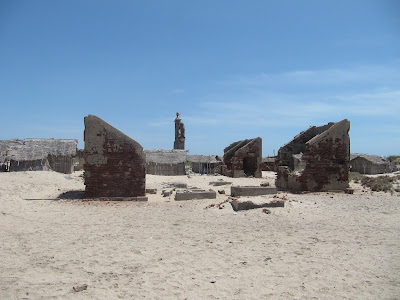 Overall Rameshwaram is certainly a must visit for not just the religious, but also to the wanderlust junta trying to discover interesting parts of India.