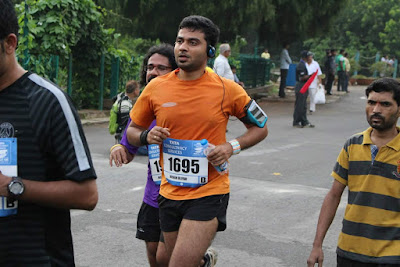 With this being my 4 edition of running at TCS World 10K, I couldnt get something which I had easily won during the past 3 editions. And that is nothing other than a free Nike t-shirt !!!!. Hence 4th time unlucky :). Predictably in this edition I couldnt achieve anywhere close to my best timing of around 52:40 mins, but still I managed my second best circuit timing, which didnt deserve this sort of treatment. So there is just one conclusion, more and more people are getting drawn into the world  of fitness and hence more is the competition level year on year. Time to pull up my socks !! :).

But frankly speaking running TCS 10K has become a bit of a bore, eventhough the weather was great with overcast clouds. Running in the same circuit every year can become a bit tedious. With an exception to this event I always look for marathons in which I explore some new circuit/route and very rarely do I return back to run in the same event unless ofcourse I do get a free Nike t-shirt which of late has become quite difficult as you might have known already :P.