They say music is without any boundaries either geographically or culturally. If this is not fact then how could one explain the fact of Indians shaking their legs for western music in Discos, Westerners doing an aerobic session for a Bollywood item number, or Chinki's gyrating to a Rajnikanth song and so forth. As expected in all the above scenarios the chances of an individual of actually understanding the lyrics right away is pretty slim , but what catches everyone's imagination is the music score accompanying the song.

Being a lazy person who literally finds some or the other reason to skip a workout in a freezing December morning, music that inspires is really a lifesaver. There is nothing more inspiring  (except if u have a few extra Kilos accumulated since the Diwali season :P ) for a person to run/cycle in those finger numbing temperatures than a good set of truly inspiring numbers. It wont be surprising if ones performance is actually improved when listening to those kind of music, hence resulting in me and my music player being inseparable during those tough times called "workout". Even though I am not a music person (I cant name all the members of the Metallica band, or for the matter of fact, not even a single person :P ), have come across some great numbers which I have "painstakingly" collected over a considerable period of time.

So here I am trying to list down some truly inspiring songs I have come across (And Kolaveri Song is not among the list , although it gave a tough competition :P). I would also be interested if the readers would recommend numbers which inspires them, hence increasing my arsenal. With 4 kgs of extra flab I have accumulated since the Diwali season it is time to get down to business. Have chalked out a rigorous session in middle of the winter and any help will be highly appreciated. Do some social service people :).

1. Dream On Aerosmith
+ a version by Eminem which is also pretty good

3 .American Flyers - The entire album is a must have.. A movie which inspired our desi version which is Joh Jeeta Wohi Sikander (The title track of which is also inspirational)

4. Back in The Saddle-Aerosmith (Default first track when I get to cycling after a long time :P)

5. Driving With The Top Down - Ramin Djawadi (A track used in Iron Man)

6. Dum Title Song  THe only good thing abt the forgetable movie. Watch with the video :)

9. I want it all/ We Will Rock You- Sucker Punch The perfect mash up of 2 great classics from Queen

10. In the End - Linkin Park . Became a fan of Linkin Park after this song, even though their other numbers are not as good as this except a few.

26. Survivor - Eye of the Tiger : Another great track from Rocky stables.

27. Till I Collapse - Eminem : Yet another track from Eminem. Looks like I get inspired the most when I hear expletives :P.

29. Vandemataram- Lata Mangeshkar  A Truly inspirational number from the queen of Indian singers.

31. Smells Like Teen Spirit - Nirvana
Posted by Nithin at 3:45 PM No comments:

Email ThisBlogThis!Share to TwitterShare to FacebookShare to Pinterest
Labels: Music, My Thoughts

Mission Impossible 4 : It Gets Better & Better 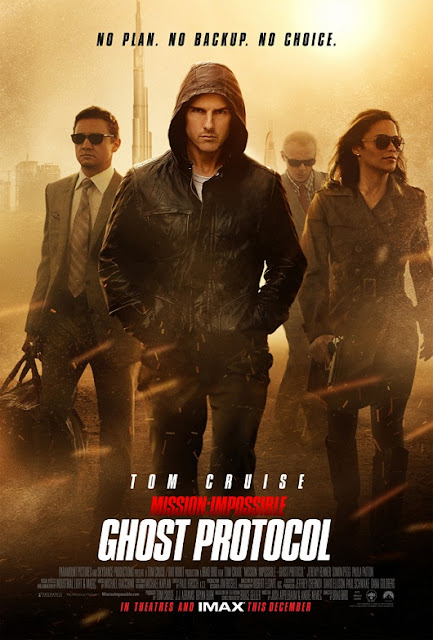 All the A-list action stars of Hollywood have atleast one major franchise from which they seem to be making endless movies. Arnold Had Terminator series until he got 'Governorated', Sylvester Stallone has Rocky and Rambo Series, Johnny Depp with his Pirates series, Bruce Willis has the Die Hard series, Jason Statham with the Transporter series (even though his A list status may be debated :P), Jackie Chan does his Rush Hour's with Chris Tucker, Harrison Ford with his Indiana Jone's, Downey Jr with his Iron Man, Christian Bale with the awesome Batman series, Hugh Jackman with X-men movies and last but not the least Tom Cruise with his Mission Impossible series. A kind of fallback safe money earners with minimum risks. Thats exactly what Tommy boy is doing over here , with him even producing the latest MI sequel.

If you don't really want to read my entire review but just want to know how the movie was in 3 words then my reply would be "almost good as the original" (Apologies for stretching my word limit :P ). Hence in short this is one best movies of the series if not better than the part I. Part 2 was the worst of the lot, which felt like a group of stunts strung together to make a movie just for the namesake. So does that mean MI4 is void of any stunts ??!!!!... Well you got to be kidding... MI movies without any gravity defying stunts are as if a body without a soul. The stunts are bigger and better... Especially the death defying free scaling stunts shown to be performed "out" of the Burj Towers (World Tallest in Dubai) and you start to wonder what is the fascination for Hollywood to take their stunts to the worlds tallest buildings (remember Entrapment on Petronas Tower's).

Story wise you got the usual settings of Russians, nukes, save the world kinda scenario which is pretty much foolproof with respect to entertainment quotient, with generous dose of car chases, gun fights, explosions and so on. The director Brad Bird (The Incredible's, Ratatouille, The Iron Giant) does a great job to leave behind his great animation legacy for his first full blown live action movie , which I can easily term as one of the best action movies of 2011.  The movie takes place primarily in 3 countries Russia, Dubai and the climax which was supposedly here in India. Tom Cruise is at his best action avatar. Even though in the previous MI movies he seemed like a one man army,  in this movie is a part of closely knit group consisting of Simon Pegg (Hot Fuzz, Shaun of the Dead), Jeremy Renner (Hurt Locker, 28 Weeks Later) and the sexy Paula Patton. Simon Pegg's (The only major character continued from previous movies apart from Tom's) character provides some good comic relief at regular intervals of time and Paula Patton provides the oomph quotient. And if by any chance Mr. Tom Cruise is reading this blog, I would advice him not to go shirtless if he is pretty much out of shape. For those curious about Anil Kapoor's role in this movie... well he was absolutely wasted. He was supposed to play an rich Indian playboy , but seemed more like a sexual pervert, with his role not lasting more than 2 mins.

Now coming to FB chatter we had encountered a few months back about how they had created a Bangalore setup in Canada for the movie.. well after seeing this movie I was a bit disspointed. They have replaced Bangalore with Mumbai for the climax but surprisingly at many places you see Kannada signboards. I was like WTF!!!!! Kannada in Mumbai ???!!!... But the attention to detail given for the Indian setting was pretty good, but one word of advice to the moviemakers, if you want an Indian setting , come directly to India... It might turn out to be much cheaper.

Finally I would rate the movie 3.5/5 movie. A complete entertainer and full time pass movie. Go watch it in cinemas :).

Posted by Nithin at 5:41 PM No comments: