A Drive Along The Coromandel Coast 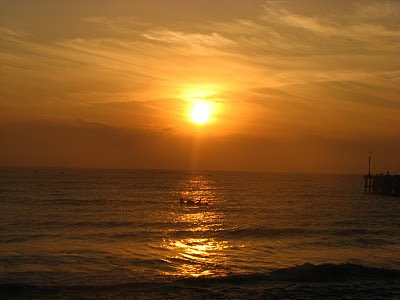 Nearly after 6 months down the lane when we had been to Kodaikanal we decided to have another such family outing. The destination was pretty much decided to be Pondicherry and the surrounding places if time permits. 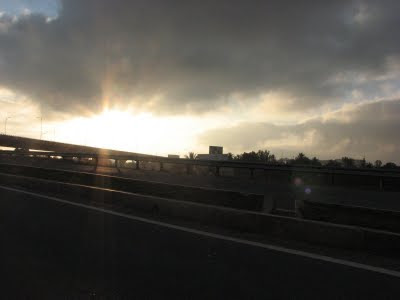 
We had decided to leave early in the morning. We were ready to leave at around 6.15 am. Drove through the Outer Ring Road upto Bannerghatta Road and then took a right to reach the Nice Ring Road(Diversions are a bit confusing though) in order to join the Hosur Road(NH-7).

After joining Hosur road the drive was smooth 4 lane road. But we were directly driving towards the rising sun which made the matter a wee bit uncomfortable. Drive to Krishnagiri was smooth with a slight traffic jam experienced at Hosur.

After the Krishnagiri toll booth there is a huge board directing the people to Chennai and Pondicherry's direction. Took a left at this point. And just after taking the turn within a couple of Kilometers there is diversion to the right to travel towards Pondicherry on NH-66(One more 6 and it would have been a ride to hell :P). Anyway the road was smooth apart from a few hiccups here and there in the form of deep and deadly potholes. In short, smooth roads encourages people speed up and these sudden potholes results in screeched braking.

Anyway the route was good apart from the already mentioned potholes. The major headaches along the route the totally congested Tamil Nadu towns we encountered in between. These were a nigthmare to navigate through(read Tiruvanamalai). Encountered the beautiful Gingee fort just of the highway. 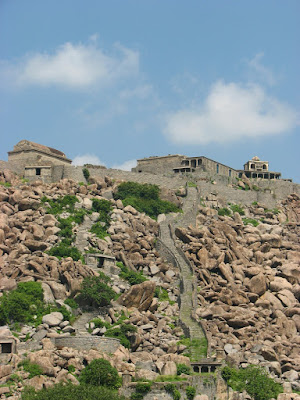 [Gingee Fort]
Since the climb to the fort seemed pretty steep and travelling with the family we chose the laid back approach and decided to just admire the fort from the distance. One thing to mention is that there is no decent eateries along the entire path until Pondicherry.

Just as we approached the Pondicherry border the scene drastically changed from the dirty, drainage overflowing 2 lane roads of Tamil Nadu to landscaped 4 lane beautiful road of Pondicherry. These things can only happen in India :P. 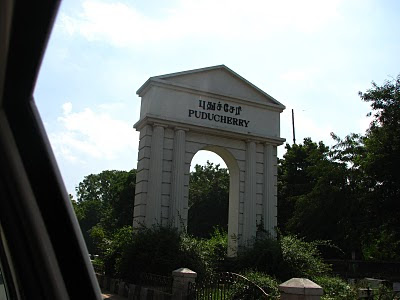 [Pondicherry Entrance]
Thus we entered the "French Riviera of the East". One of the cleanest cities in southern India. Driving through the calm streets of Pondi we were able to experience leisure driving within city limits long forgotten in the streets of Bangalore. Time was around an hour past noon taking a total of 7 hrs for the drive from Bangalore in our humble Maruthi 800. Started looking for some rooms to stay, and found the Hotel Continental just around 400 m from the Pondicherry beach. Pretty decent one and within our budget. From there started the search for a decent veg hotel and got one. Food was nothing spectacular so don't remember the name :(. 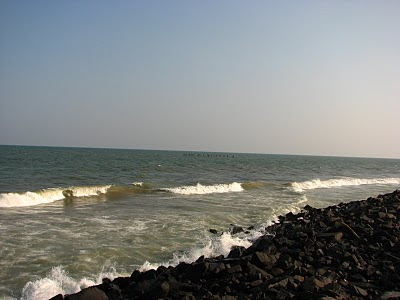 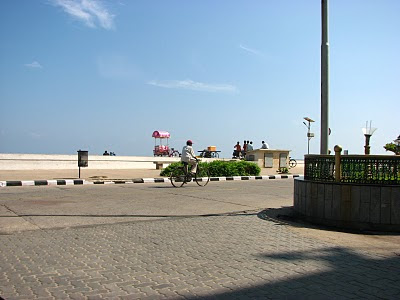 After lunch we went in search of Pondicherry museum. The museum building was a restored residence of the viceroy of Pondicherry. Nothing spectacular in the museum, but some time can be spent here nevertheless. 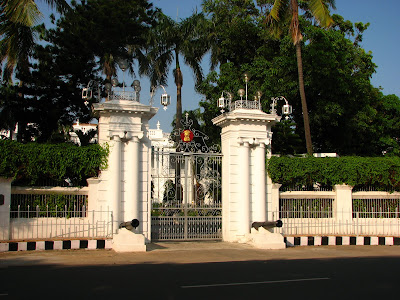 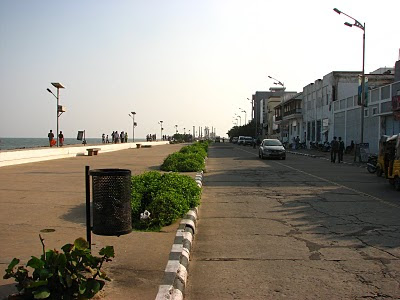 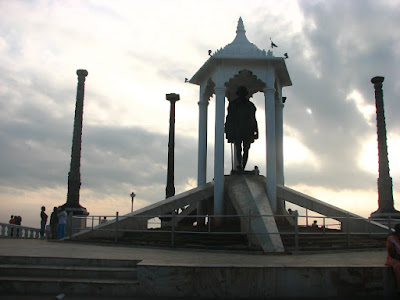 Towards the evening we moved towards the famous Auro beach via the drive along the East Coast road towards chennai. This beautiful beach is around around 8 kms from the city, and the traffic was pretty heavy too :(. Anyway we chilled in the beach , playing in water etc. 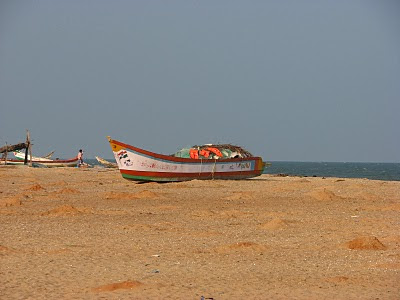 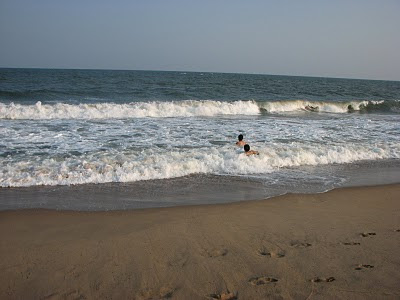 Returned back to the city by nightfall and started to explore the city by foot and also to find some good restaurant to have our dinner and found a place called "Bilva"on MG road. Food, ambiance and service was very good. A must visit for vegetarians coming to Pondi.

Overall a point to remember for those planning on a vacation to pondi is that there are not many places to visit (beaches, ashram, museum). Its best for those who want to just chill and relax in this laid back city and do nothing :P and this was perfect for us on a family vacation. 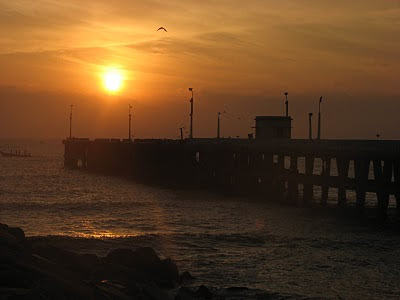 6-Dec-2009
Woke up before dawn in order to catch the sunrise from the Bay of Bengal. Was a bit cloudy on the horizon, even then when the sun rose from behind the clouds was a very pretty sight to watch.

Our next destination for the day was Mahabalipuram. A town famous for archeological excavations having structures built by the pallava kings dating back to 7th-9th century . Moved along the East coast road, a 2 lane highway connecting Chennai. Paid the required toll tax and whizzed along this smooth highway with the Bay Of Bengal giving constant companion along the right side of the road. 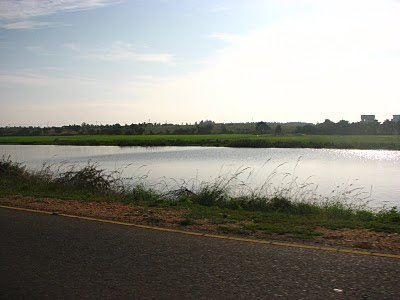 Reached Mahabalipuram in an hour and half. Saw a board giving direcctions to the Five chariots(five monolithic pyramidal structures named after the Pandavas). These chariots had very detailed and beautiful carving on them. Also this is a good place to do some memorabilia shopping. 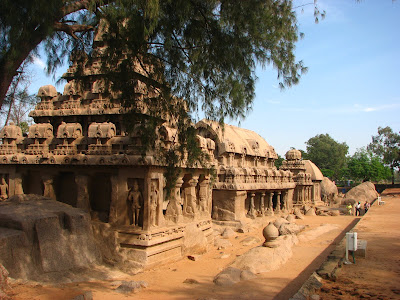 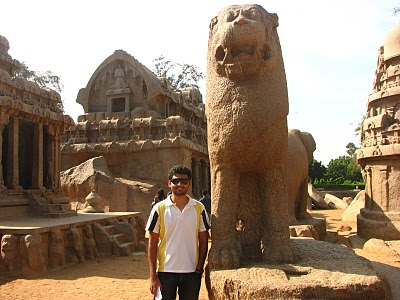 [Modern Lion Posing with the ancient one :P]
With our tummies rumbling sans no breakfast we went to a hotel "Mahabalipuram Tiffins" and had our breakfast. Mahabalipuram is in fact a very small town with the major revenue earner being tourism. There are 3 sites for visit. First is the Five chariots, and if we move along the same road within 500 m or so we get the second site which contains a huge number of excavations including the Mahishashuramardhini Temple,Krishna's butter ball, Varaha Devi Temple, Arjuna's Penance etc. In short there are nearly 10-12 structures in the second site and they are placed at some considerable distances taking nearly 2-3 hrs to explore all of them in a relaxed manner. Even then some depictions like Arjuna's Penance didnt make any sense to me :P. 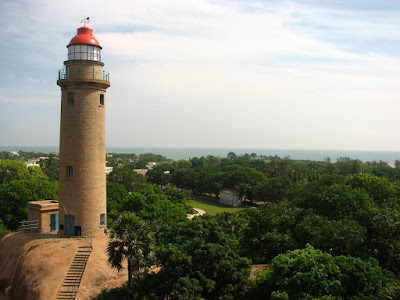 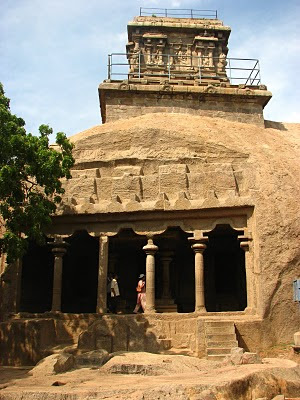 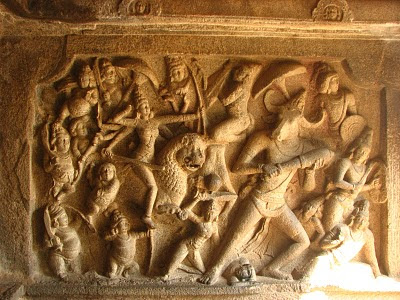 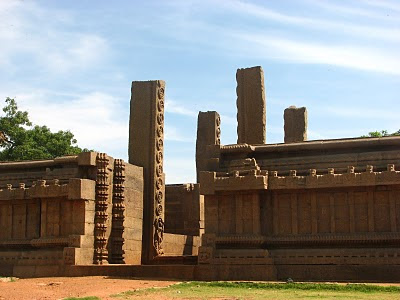 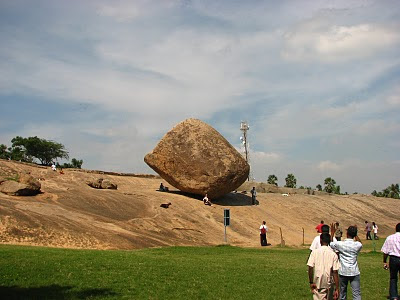 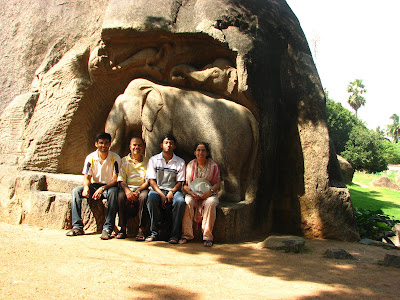 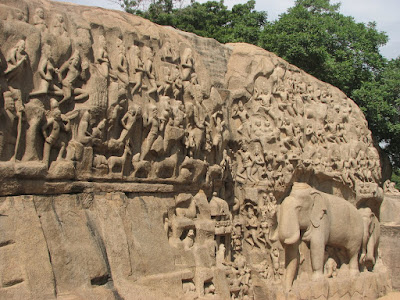 The final site to visit is the Shore temple around couple of kms from the second. I have never heard anything like "Shore Temple"("Shore" as in sea shore) before this. This sea facing temple has taken the brunt of the seas with considerable erosions of all the carvings.

Also a mention to the Archeological Survey Of India which has done a good job of maintaining all these structures and increasing their aesthetic value by maintaining beautiful lawns, flowering gardens around these centuries old structures. 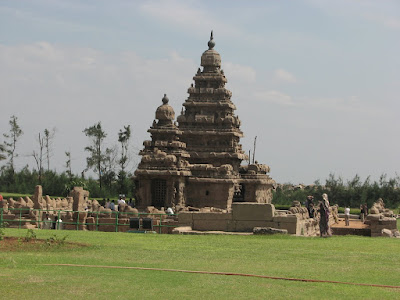 [Shore Temple-Mahabalipuram]
Went to the beautiful blue watered Mahabalipuram beach, next door to the Shore temple and we can get a glimpse of Kalpakkam Nuclear Power station at a considerable distance to the south(or i thought it was :D) 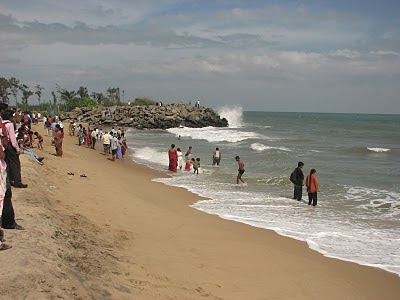 Then we moved towards Kanchepuram via the SH-58. Here too they collected toll for highway usage. But the initial stretch of the highway was horrible considering that we paid toll for this bloody road. Guess Tamil Nadu Govt has privatized all the highways under its jurisdiction and these private companies are misusing it. Anyway as we approach Kanchipuram the roads become good.

Went to have darshan at the temple, but to our bad luck it was closed for another 90 mins or so. So considering that we have to reach Bangalore we left Kanchepuram and joined the Chennai-Bangalore Super Highway :P. Ride along this route was smooth with our Maruthi 800 doing 130-135 kmph at some stretches. Reached Bangalore at around 7.30 pm and again took the NICE road to reach our home bringing down the curtains on this laidback vacation. 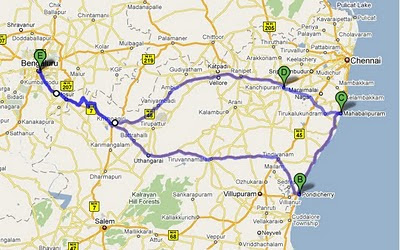 Avatar : An Experience and Review 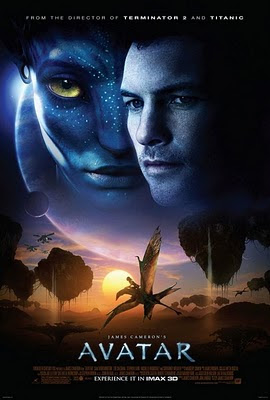 Nearly 5 months since I took a voluntary "sanyas" from movie watching in theaters because of obvious reasons (For people who are a bit of tubelights like me ....... think H1 * cough* N1 *cough* :P) something compelled me to break that and come again and watch movies in theaters. That reason was none other than the movie "Avatar" in 3-D, the most awaited movie of 2009.

This is the first movie I have watched in 3-D and boy it was spectacular, a visual extravaganza. So got an opportunity to watch this movie from one of my favorite directors, James Cameron. Got tickets booked for saturday noon show at INOX theatre, Garuda Mall at a steep charge of 375/- per ticket(phewww!!!!!).

The movie starts with the "20th Century Fox" logo displayed in 3-D giving an idea of what to expect from the entire movie. I had wrong perception that this was displayed in true 3-D here in India, but i was wrong. The screen gives only the sense of depth and objects doesnt seem to be floating out of the screen as I had expected. Even then it was a treat to the eyes. Giving an extra dimension in the screen is a totally different experience. :).

Coming back to the storyline of the movie, it was not completely original. Going through the various stages of the movie you cannot resist remembering movies with the similar storyline like The Last Samurai and the more recent The Surrogates (If u were one of those unlucky bas****s who watched this :P). Movie starts with Jake Sullyman (Sam Worthington) signing up for project in background of his brothers death. Due to the similiar DNA as his brother, he is brought on board on a mission in a distant earth like heavenly body named Pandora. This moon Pandora has a native humanoid race,named Na'vi, 10 foot tall with blue colored skin. The job of Jake is to take control of a Na'vi body(similar to Surrogates) and infiltrate the indigenous population for Intel, so that the human bosses can retrieve the huge deposits of a highly expensive mineral right under the Na'vi tribes settlement. So this movie deals basically how Jakes enters the tribe and learns various customs, tradition and how he falls in love with the princess of the tribe and finally turning against the humans.

Overall apart from the visual extravaganza the movie has heart (unlike CGI filled movies Michael Bay churns out ......read Transformers 2).Nearly 80% of the movie is pure CGI, even then you feel the visuals are authentic, with the attention given to very minute details. The actions scenes are spectacular(due to 3-D effect ????? !!!!! :P) keeping action buffs like me interested and on the edge of the seats. Even the total run time of nealy 2 hrs 45 mins will give you the impression that it is a really long movie, but believe me you wont even know how the time fly's by. At no moment of the entire movie was I bored or uninterested, totally glued to the screen :). Rating wise I would give it a 4.25 out of 5.

And in comparison to other of Cameron's movies(in decreasing order)

So don't miss this movie and insist on watching it in 3-D theaters, bcoz 3-D television sets are a good 2 years from coming into India. Finally I am back to continuing my "sanyas" with a slight glitch in between :).

Statutory Warning: Prolonged viewing of 3-D visuals using the special glasses might lead to mild headaches :).
Posted by Nithin at 7:25 PM No comments: