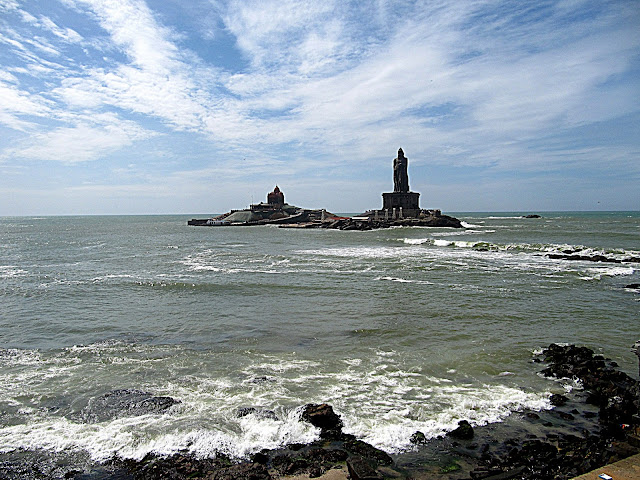 Kanyakumari is a bit of a letdown considering the aura it projects across the Indian subcontinent, such as the southernmost tip of mainland India, the place where all the 3 major water bodies meet (Indian Ocean, Arabian Sea and Bay of Bengal). There are only a couple of places where one can visit. They are the Kumari Amman temple, the Vivekananda Rock memorial , the Thiruvalluvar rock statue and the sangam beach. 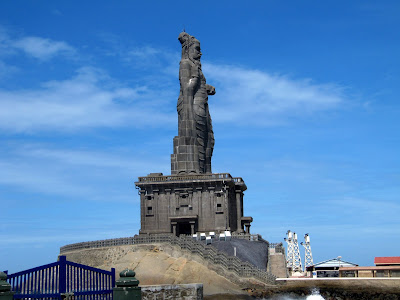 The first place we visited was the temple. Frankly speaking this was the least impressive of all the temples we had visited during our South India trip. It was small, hidden in some back alleyway, with no spectacular gopuras or intricate carving. But the best thing about this place is you get some good  views of the Vivekananda memorial and Thiruvelluvar statue. 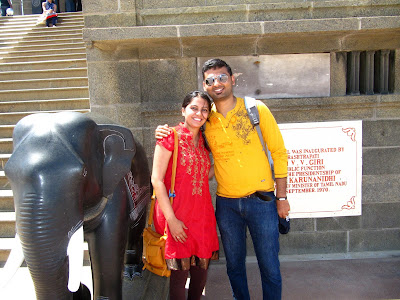 From the temple we went to the docks, from where ferries are run to and fro the rock memorial. The time taken is hardly 10 mins and after some recent tragic incidents, they have made it mandatory to put on life vests. The Vivekananda rock memorial is a pretty interesting place to visit . The place where Swami Vivekananda had come to meditate before making his way to Chicago. There are a lot of memorials of the saint and the best part is the meditation room. Visiting this place was quite soothing, with it being surrounded by sea in all direction. Entry to the Thriruvalluvar statue is banned due to choppy seas. Don't know whether this has been done recently with the onset of monsoons , or whether its a permanent affair. The last time I was here was close to 20 years back, and I clearly remember visiting the memorial like it was yesterday. How time flies :). 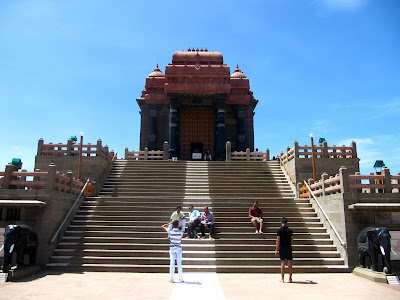 The best and the unknown part of Kanyakumari not to be missed is the huge farm of windmills along the Kanyakumari-Kashmir National Highway. It was a very pretty sight driving along this deserted highway. Next stop Rameshwaram :). 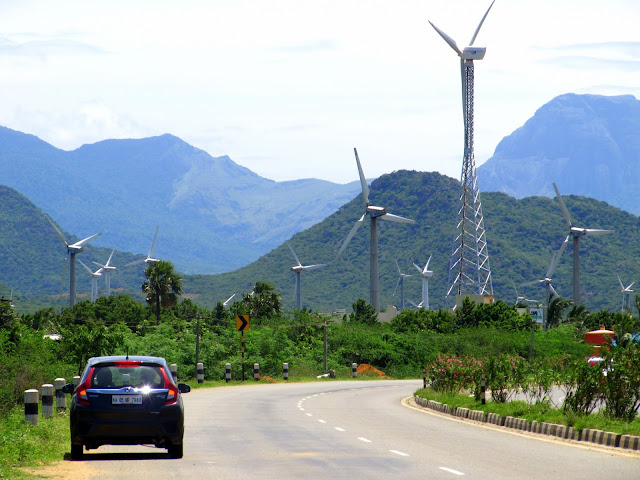 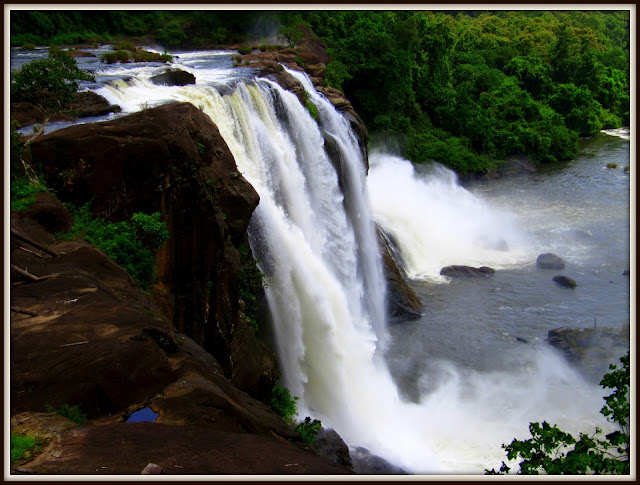 A normal weekend getaway swelled in size with more and more places of interest being added,  and in the end we had a full blown South India road trip, with the total distance of 1950 km to be covered in 5.5 days, making this my second longest road trip after my Ladakh bike trip. With Southern India dominated by many major temples, by the end of this trip we were saturated with temples. We took the Kerala route to reach Kanyakumari, passing through Thrissur, Kumarakom, Trivandrum and while on the return journey took the route via Rameshwaram, Tanjavur, Srirangam etc. 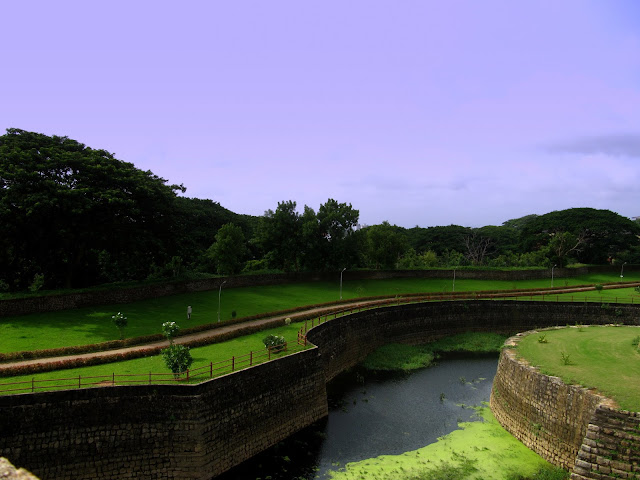 So left Bangalore on a friday evening and drove non-stop till Coimbatore with a dinner break at Salem. Covered the entire 370km distance in around 6.5 hrs and that demonstrates the condition of the tolled multi-lane highway all the way to Coimbatore. Covering maximum distance was the only criteria and we were able to achieve that with ease. The following day we got up early and headed towards Pallakad. Road between Pallakad and Coimbatore is good and we entered the state of Kerala. Visited the Pallakad fort , which was mildly interesting , but the greenery and the cool monsoon breeze made it a pleasant experience. The fort has a small temple in the centre and a functional sub-prison too. Other than that , there is nothing much to view at this place. Left this place soon enough. Thrissur was our next destination. However the route between Pallakad and Thrissur was in bad condition, with lot of ongoing road widening work. 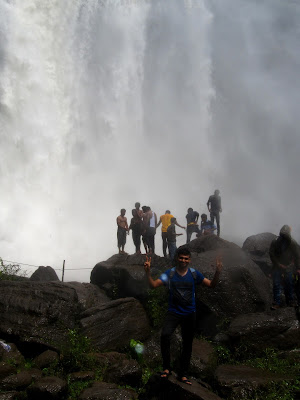 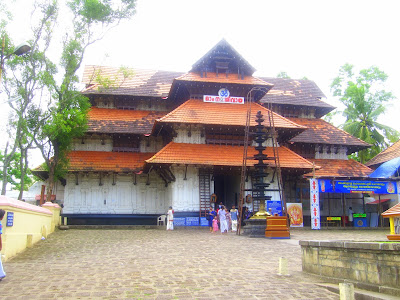 Reached Thrissur and directly went to the Vadakunnathan Temple, which is famous for the line of elephants adorned in attractive attires during a specific festival. Unfortunately the gates to this temple closes at 11 am and we reached at 11.05 :P. Hence had to content ourselves from the outside. From here we started towards Athirepally falls and in my opinion its one of the best falls in India. This falls has been made famous by a lot of movies such as Bahubali (where they have added a lot of special effects on top of the original) , Raavan , Dil Se etc. The route was a pleasure to drive from Thrissur, including a drive through forest. Reached the forest entrance, paid the required fee and then walked towards the falls. The first view of the falls i.e. the upper side view takes around 15 min easy walk from the road. The falls drops from nearly 100 ft and is really breathtaking, kinda like a mini Niagra, with the width of the falls more dominating than the height. From this viewpoint one has to take a steep 15 min walk to reach the base of the waterfalls, from where one gets the lower front of the falls and without doubt the best place to experience the falls. Due to the onset of monsoons the falls was brimming with capacity and the entire base was shrodded with thousands of droplets drifting from the main falls. However no one was allowed to take bath directly under the falls. 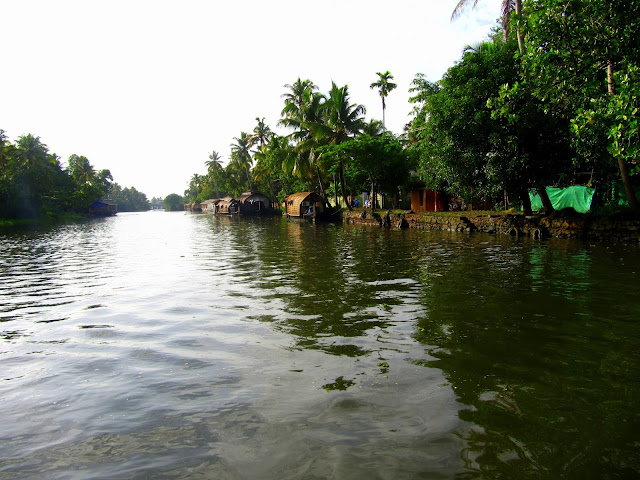 From the falls our next destination was Kumarakom, where we had booked a houseboat for the night. In my previous visit to this area I had gone to Allephey and hence decided to explore the backwaters of  Kumarakom. In comparison Kumarakom is a lot quieter, with fewer house boats running through the backwaters. It has a more village feel to it in comparison to the city feel offered by Allephey. However reaching Kumarakom might be a bit tricky, if not having a private vehicle at ones disposal. We enjoyed the view of the huge backwater lake and were accompanied by hundreds of ducks which were flying and feeding along with the houseboat. In short Kumarakom was much was soothing and relaxing than Allephey. 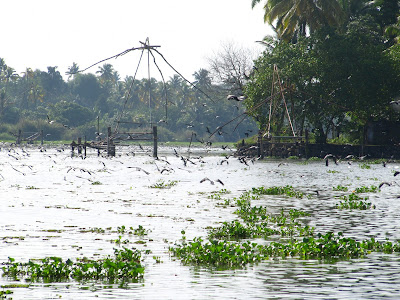 The following morning after the 2 hour boat ride in the morning , we left for Trivandrum. One unique thing about Kerala is that the entire state is highly urbanized and you dont get the feeling of riding on an isolated highway. At any section of the highway there would be houses flanking both sides of the highway, unfortunately leading in higher traffic density and narrow roads. We reached Trivandrum by noon. Only thing we wished to visit in this place was the famous Padmanabhaswamy temple, which has been in headlines for value of the treasure found in its underground vaults. Since we had still some time we decided to visit the famous Kovalam beach. This beach is unique for having black sand and was pretty neat and clean . Spent some time in here and had our lunch. 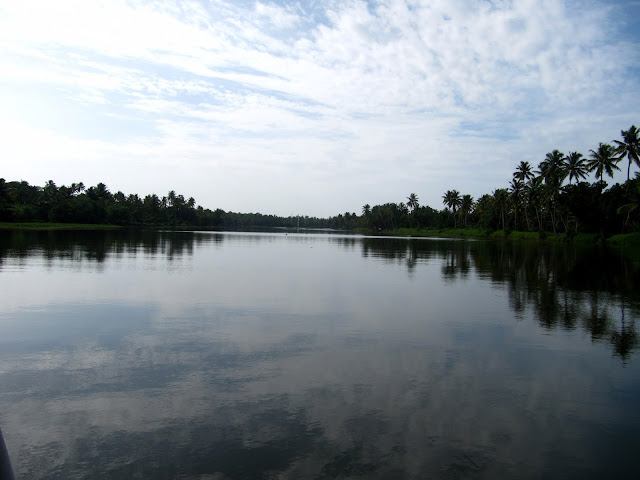 We were back to Trivandrum sharp at 4.30pm when the temple doors open. This temple has one of the most strict security measure I have seen anywhere, and even eclipses the airport security measures. You have to deposit pretty much everything. No phones, camera, remote car key, fitness band etc. And one is expected to strictly follow the dress code. For men its white dhoti and for women its either sari or a white dhoti wrapped around the waist and no salwar etc. We came across a temple representative and he acted as a guide detailing the history and mythology of the temple. The temple was huge and very beautiful from inside. The kings of Travancore believe that the main deity of this temple is the actual ruler, and they are just the caretakers on his behalf. Hence because of this reason all the taxes collected would be deposited in the temple and this has resulted in such a huge stockpile of gold and other precious stones. 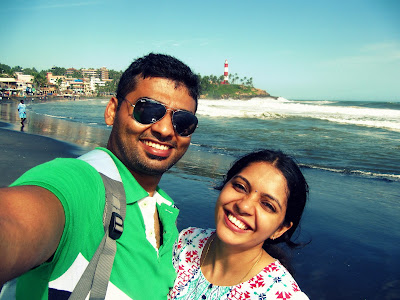 From Trivandrum , it was again through the narrow highways of Kerala and by nightfall we reached Kanyakumari, the southern tip of mainland India. 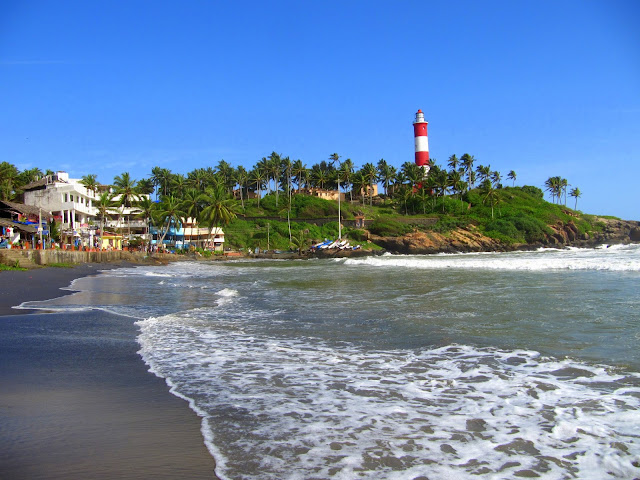