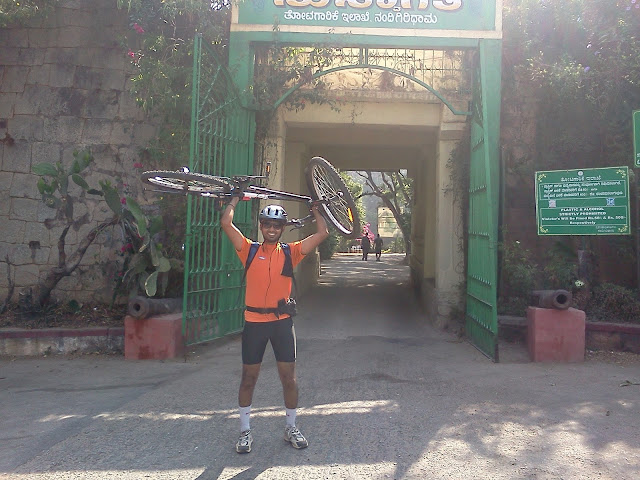 The Nandi Hill cycling plan was in offing since a long time, nearly 1.3 years to be precise when I had been to this place in my motorbike. Since then had wanted to conquer this peak in my humble cycle and finally got enough motivation to try it on the long weekend of April 2, 2011, but sadly was all alone in this attempt. Frankly speaking this was less of pleasure trip which I normally have and more of an endurance test of whether I can handle cycling 150 odd kms with a huge monstrous climb in between and in the end I barely managed to pass the test.

Started at around 5.20 am on the Saturday morning. I adopted an approach of slow and steady pace  unlike my weekly ride to work since I didnt want to get tired too soon with blistering speed and considering that I had a long and hard day ahead. The journey in the morning was pretty awesome. Initial estimate of completing the entire ride was 2 pm but seeing the good pace of 23+ I was able to maintain, was pretty optimistic of completing it well before 12 noon, which couldnt be more wrong. The entire distance along the Bellary Road (NH-7) has some decent gradients having neither monstrous climbs nor thrilling downs. And add to the fact that that there are 8 lanes of road so I had one lane completely to myself and no one bothered me at all, which is not the case for cyclists in highways around Blore.

Also there was some construction activity going on (elevated highway) up till the airport but since there was very little traffic this early in the morning was not inconvenienced at all. After the airport there was little or no traffic at all and I had the entire road all to myself and reached the Nandi Hills diversion after some 2 hrs of leaving home and 52 km in the odometer. From here the Hills are at a distance of 22 kms with 9 kms of ghat roads and upright climb. Reached the base of the hill at around 8.30 and from here started the deadly climb and the most strenuous section attempted on my bike ever. Set to high gear, started the climb and soon enough sweat started to flow like some glacier melting into river :P. Came face to face with a couple of professional cyclists going downhill on their road bikes and I could swear that they were doing a minimum of 65+ with them being just more of a blur. One of them was a Indian male and another a Caucasian male and we could just manage a customary smile and nod, shared by fellow cyclists even if they are complete strangers :).

Had to take 2 bigs breaks enroute when the going was very tough. While taking one such break came face to face with a old frail women in the middle of nowhere.... she was deaf and whatever she spoke made no sense to me... directly gave her a 20 buck note , but still she was lingering around me and I had no idea what she was expecting of me. Anyway I moved on and as the destination came within reach the gradient became even steeper with lots of hair pin bents, as if the hills is offering its final resistance to any invaders trying to conquer it. Finally reached the parking lot at around 9.20 taking around 50 mins to complete the 9 kms. Rested at the top for about 20 mins striking a conversion with a guard and a gardener and even posing for some souvenir snaps taken with my new found friends help :P.


Now started the returned journey back home and initial part of this went really well. The downhill ride was really spectacular and thrilling along the ghat roads. Was trying to control my speed within 40 for safety reasons which was a hard thing to do and completed the downhill in about 10 mins, a striking contrast to the uphill time. Soon hit the NH-7 and from here started the exhausting ride back home. The sun was up in full glory and literally there is no shade along this route and to top this there was a strong headwind , bringing down my average to the tune of around 10-12 kmph. I was contemplating a plan of drafting with some other bigger vehicles but on this super highway vehicles were just zooming past and that was something which I could never match even in my wildest imaginations. My best bet would have been to draft behind a tractor or something similar but thanks to my luck I found no such vehicles, leaving me to fend for myself. 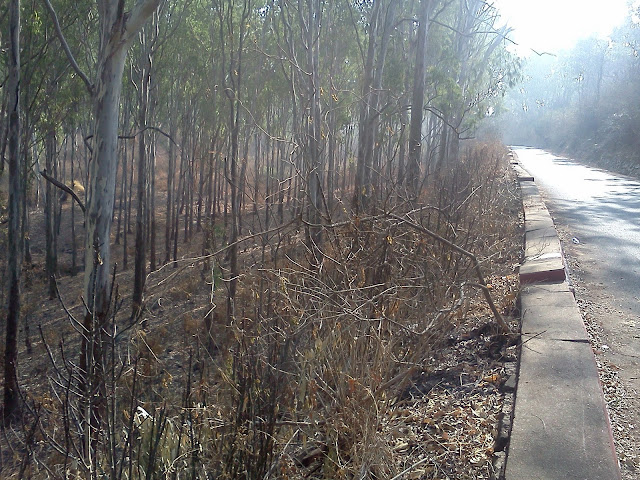 When I hit the 105 mark I was so exhausted that I felt that I would bonk over , so took a good break under the burning sun and replenished my body with fluids and carbs and the fact that my bottom had started to get saddle sores did make matters worse. And by the time I hit Yelahanka the traffic was moving at snails pace, thanks to the construction work. But surprisingly I was thanking my lucky stars since this meant breaks at lesser intervals and more importantly no head winds since I could follow other vehicles easily :). This somehow boosted my confidence and by the time I reached Hebbal there was a new vigor in my pedal strokes. From here I had to commute more or less the entire length of Blore city to reach my home, but this section was less demanding thanks to slow moving traffic and shaded streets of Blore :). Finally reached home at around 2.20 pm taking exactly 9 hours to complete this challenge.

In short this day easily makes it to my top 10 toughest days ever(and the nerve wracking cricket finals added fuel to the flame :D :D :D). This was more of a test of mental strength than physical endurance that I initially expected it to be. Its not that as if I would have tried till I would have collapsed or something becoz that would have been too foolish. I always had an option of quitting (airport volvo buses will be more than happy to take me and my bike :P) and I wanted to push my body only till the point it could handle and not beyond it. In my previous century outing I had a feeling that I had still some juice left , but in this ride I have definitely reached my limit. Next stop is 200km mark , but have to ensure that there are no such killer climbs as this one and got to increase my stamina level. Lot of work to do for the next milestone :).

P.S. --> Mobile Phone Snaps
P.S. 2 ---> Dedicated to Team India for winning the cup and an indirect inspiration for me to reach home quick and catch the 2.30 match :P
Posted by Unknown at 4:32 PM