Encounters of the Duathlon Kind

Even after being involved in both these entities since quite some time , their paths had not really criss-crossed until now, when I was to take part in my first ever Duathlon. The event was the Ajmera Sponsored Duathlon organized by Life-is-Calling to be held in the wee hours of 7th July 2013 within the confines of Electronic City. With the run-cycle-run format, this was a completely new thing for me, and for a person who aims to become a triathlete this was the first step towards nirvana. The total distances were 2.5km run followed by 18km cycling(12km for ladies) and finishing it off with a 2.5 km run. Sounds easy for a marathoner doesn't it :).

Got my bro's Jazz to transport my dismantled Rockrider 5.1 to the venue. This was my first ever competitive ride on my trusted 4 year old bike (which nowadays cannot be trusted much :P.... ) and the organizers had touted this to be India's---first---duathlon---to---be---held---on---NH's---longest---flyover. Lot of technicalities you see, but end of the day it had some "India's first" tag :P. The things the organizers do to market their event ......

Landed up at the venue(NTTF grounds) with it totally engulfed in festive spirit, along with Shashi who had already given his bike to the organizers for transportation. There was music , drums being played in a trance by some spirited African drummers, a DJ as MC and booty shaking crowd doing a fun warm-up before the endurance race. There were close to 200 participants for the duathlon which included both the team event and individual events. Went and parked my bike at a designated spot inside the transition area, with the gloves, helmet etc placed at strategic places so as wear them in the shortest possible time after I complete my first lap of running. The event started at 6.45 am and off we were let into the streets of Electronic city to complete the first 2.5 km.

This first part of the run was not at all challenging. By the time its starts to get tiring, I was back to the transition area to start the cycling leg. Putting on all the cycling gear in the shortest possible time and somehow this reminded me the kindergarten days where one used to have competitions like run-wear socks, run-wear shoes, run-wear sweater and so on. It was actually fun traversing through the transition area all geared up, running with your bike till the no biking zone and then all of a sudden mounting on the bike and cycling. The entrance to the ground was kinda narrow and the same was being used by bother bikers and runners for entry and exit during the run. This was kinda scary and a mess, with lot of blind corners and both the bikers and cyclists coming in with full speed. A potential disaster waiting to happen I thought, with me having a couple of close calls. But luckily nothing untoward happened. 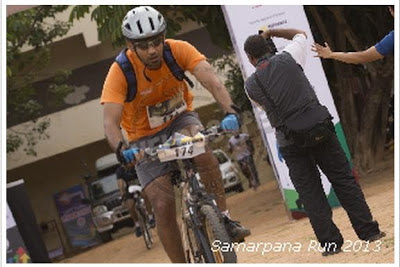 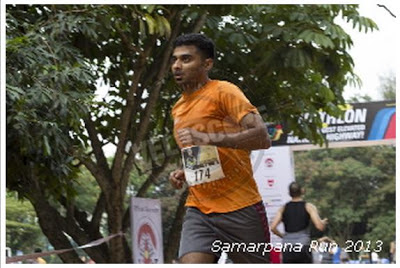 For the cycling leg we were let into the Electronic City flyover and within no time we were bogged down with strong headwinds. Roadbikes with a better aerodynamics were able to negotiate this quite easily, but MTBer's like me had to endure the brunt. Cycling was where technology had a higher priority over endurance. This hard fact was illustrated to me when the guys whom I had overtaken during the 2.5km run, overtook me during the cycling leg in their carbon-fiberish road bikes and ultimately went on to finish 2nd and 3rd :P. I am not saying that I would have beaten them if I had a same bike, probably they are better cyclists than me (ofcourse they are, they represent a professional cycling team :D ), but I felt that with the distance for cycling and running set by the organizers, hardcore cyclists had a bigger edge over runners. 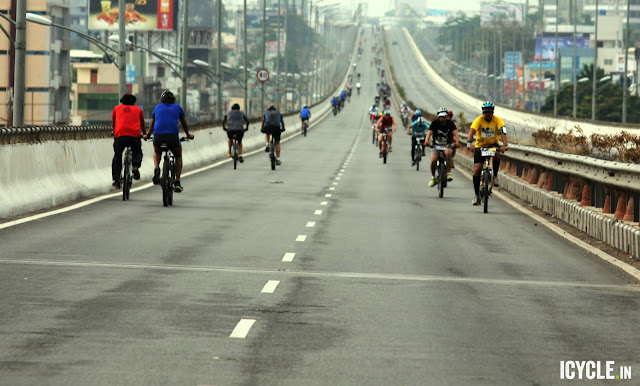 Once the excitement of riding on top of an endless flyover dies down, the ride becomes pretty much boring with the views being monotonous for the entire duration of the race. Unless u r overtaking someone or someone is trying to overtake you, all the adrenaline rush starts to kick in. All the road-bikes were pretty much untouchable and I focused my competition to just MTB's and Hybrids. I won some one-on-one battles and at the same time I lost some too. But it was fun. Drafting behind another cyclist to avoid a headwind and then suddenly overtaking that person and then a role reversal, with them chasing you , but at the same time enjoying the draft behind you :). I was even thanked by a biker for letting him draft behind me , when in fact I didnt even know he was doing tat :). We bikers are such gracious adrenaline junkies you know :P.


After the 18km bike ride, I was back to the transition area and I dumped all the cycling gear and got ready to run. Eventhough I was not tired beyond a level, my legs were kinda refusing to run !!!!!! I dont know what phenomenon is this... something new I was experiencing and maybe a common thing in cross-sports. Anyway after some time the legs were woken up and I got the regular run momentum. Finished my race strong with my usual sprint with a total time of around 1hr 8 mins . Shashi finished his race close to 18 minutes behind me. He was let down big time by his "chinese" bike. After the race it was back to the celebration-festive spirit with breakfast provided for the participants. Overall it was a fun experience. 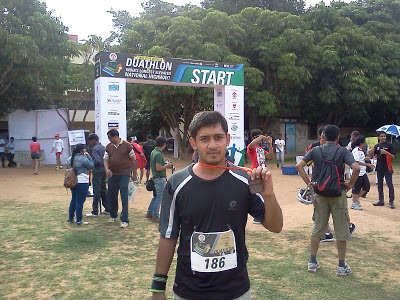 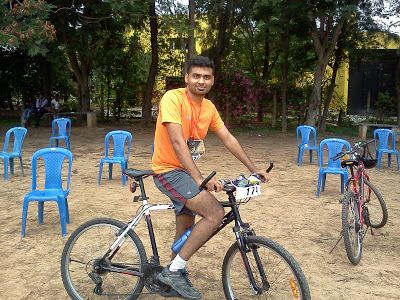 (Both of us with the finishers medal :) )