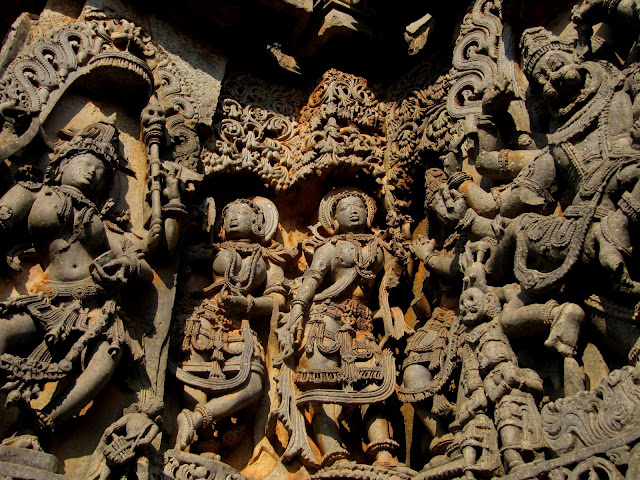 A long christmas vacation and my hands were itching to plan for a long drive. But thanks to my previous experiences with long weekends, decided to keep couple of things in mind. First, was to head towards a rather offbeat destination rather than an out and out travel destination, and the second was to head back to Bangalore on a non-holiday , so as to avoid the huge traffic mess one can encounter on the highways leading back to the city.  Therefore keeping these 2 major pointers in mind I had a very relaxing drive and holiday, even though more than half of Bangaloreans had abandoned the city for a vacation spot. In total it was planned to be a 4 day drive with the last day being reserved for a family function in my native place. Hence that left us 3 days to explore the places in the vicinity. On the first day we left Bangalore quite early in the morning, but still had to encounter a lot of traffic, which were trying to make their way out of the city for the long weekend. Our first destination for the day was Shravanabelagola, which is off the Bangalore - Mangalore national highway. We took a left deviation at a small village named Hosur and got off the main highway. Even the condition of this particular deviation was good, and we reached our first destination taking close to 2.5 hrs after leaving Bangalore. We could see the grand Bahubali statue from quite a distance, even before entering the town. Parked our vehicle nearby, and it was time to climb the 600 odd steps of the Chandragiri hill to reach the main attraction of this place, the Bahubali statue. 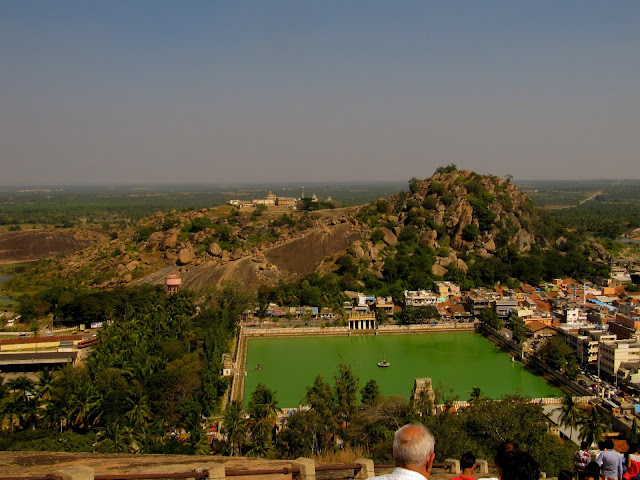 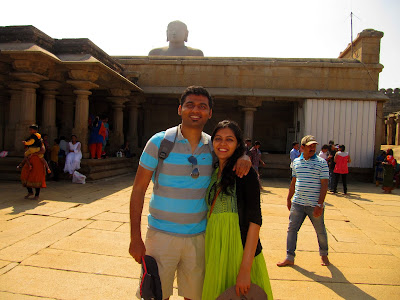 There are certain restrictions when climbing up the Chandragiri hill. One has to let go of any type of footwear, and this might be an issue if the temperature rises especially during the middle of the day, considering that this huge monolith hill is void of any shade. Hence it is advised to commence the climb either early in the morning, or in the evening. Even though any type of footwear is not allowed, one is allowed to climb with their socks on. Hence it makes sense to bring along a pair of thick cotton socks. When we started the climb, even though the sun was shining bright, it was quite pleasant, thanks to the winter morning chill. Since my mom was accompanying us we completed this climb taking frequent breaks in between. For those who are fit, this climb will just be a piece of cake. For the sick and old there is another option of getting carried to the top in a palanquin by 4 men. 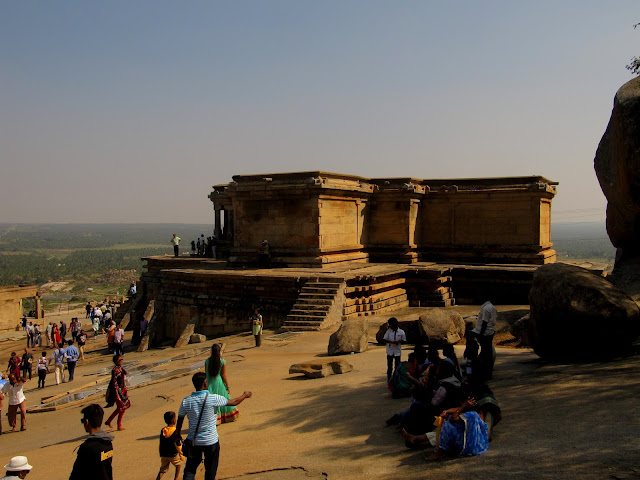 We reached the top after climbing for an hour or so, after encountering a lot of gopuras and Basadis en-route. The giant statue looks quite imposing from close quarters, and it was worth it to climb all the way up the hill. The views from the hill were breathtaking too, especially of the pushkarani pond of the town sandwiched between the 2 hills. We climbed down the hill quite quickly, and were back on the highway. Had our lunch at an A2B restaurant just before Hassan. 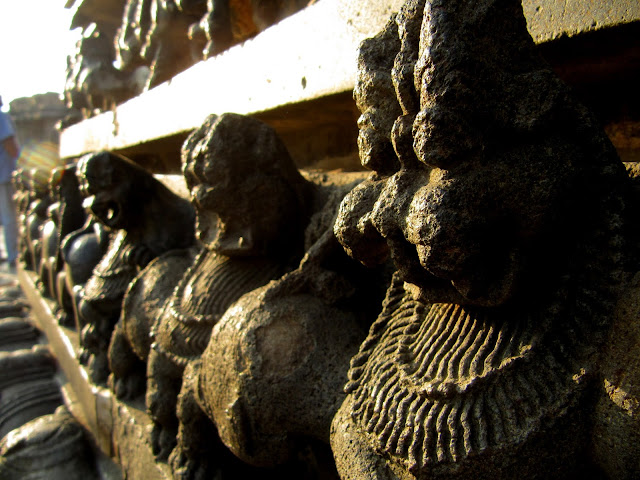 Our next destination for the day were the historical sites of Belur and Halebid, which are actively vying to get the UNESCO world heritage site tag. We first visited Halebid temple i.e Hoysaleshwara temple built in the 12th century AD. We hired a guide and she took us on a tour of the temple and explained the various intricacies of the place. The carvings on the outer wall was just mind blowing, and unlike anything I have seen before. I don't suppose the intricacy with which they have sculpted the various scenes from the  mythological texts, can be achieved today even with the help of modern technology that we possess. These sculptures looked like they had been 3D printed to be precise.

From Halebid we moved on to Belur, which was about half an hour's drive from Halebid. Both the temples were brimming with tourists, who were awing at the fabulous visuals. Even though Belur is much famous in comparison to its sibling, I somehow felt that Halebid was the better of the two. For starters, the level of intricate carving of Belur dulls in comparison. It somehow gave a feeling that there was lot of empty space in the outer wall of this 12th century temple after having been to Halebid. Nevertheless this temple has its own charm. When in direct comparison Halebid has some mind-blowing carvings on the outer wall, but Belur takes a lead when comparing the carvings inside the temple. Hence one should not miss either of the attractions. Belur temple complex is also much larger, with a huge gopura entrance and various other temple complexes flanking the main temple. We spent some peaceful time in here , witnessed a glorious sunset and then it was time to move towards Chikmagalur, our final destination for the day. 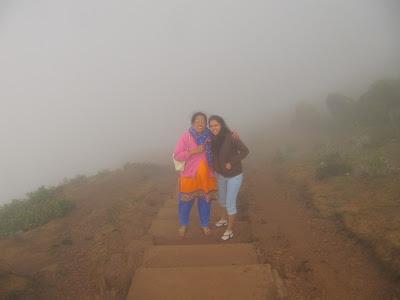 The next day we got up quite early, at the crack of the dawn and made our way towards Mullyangiri , the highest point in the state of Karnataka, at an altitude of 1930 m above sea level. Even though I had trekked to this place using a different route , I had heard about the thrilling and narrow motor-able route leading to the roof of Karnataka. We started early in order to avoid the crowd and thankfully it did get crowded as the day progressed. A piece of advice for those attempting to climb all the way to the top, is to be confident of your driving skills and your ride, since at many points you would be tested, with scenarios such as reversing uphill on a narrow road with steep drops to hell and on top of that void of any crash barriers. My wife and mom were scared to the core !!!! :P.  Reaching the top is one achievement, parking there is another, reversing your vehicle and coming back is yet another. Two cars can barely cross each other at most of the locations, and if a much larger vehicle comes then you are done for :). Anyway after reaching the top it was worth all the effort. Even though we couldn't get any views, it was totally engulfed in mist , gale winds and was totally worth it. We visited the temple on the top, guided my wife and mom to the secret caves I had explored when I had trekked to this place and then it was time to return back. 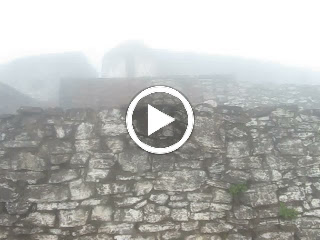 While returning back we came across a place Sitalayangiri, which is 3kms short of the Mullyangiri peak and most of the taxi guys dupe their customers saying this was Mullyangiri. This place was also good, and by this time the sun was out, and we got some great views of the surroundings hills including the all imposing Mullyangiri peak, which was playing hide and seek behind the clouds. We returned back to Chikmagalur, had breakfast and then it was time to leave the town, and move ahead in our journey. From Chikmagalur we went to Horanadu, passing through some thick vegetation in form of Kudremukh wildlife Sanctuary. But unfortunately Horanadu was crowded like hell, which was surprising since in our entire road trip, this was the most crowded place we encountered, which was infact in the middle of nowhere. Visited the temple for a darshan and completed ours from the entrance itself, since there was a huge line to get inside the temple. Left Horanadu and moved along the Kudremukh Wildlife Sanctuary stopping at some tourist spots such as Lakya dam, tea gardens and so on. 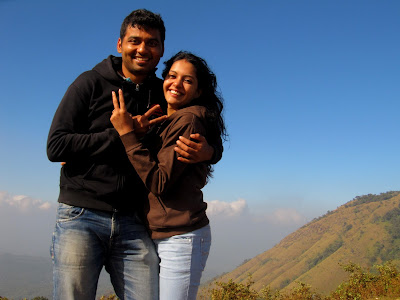 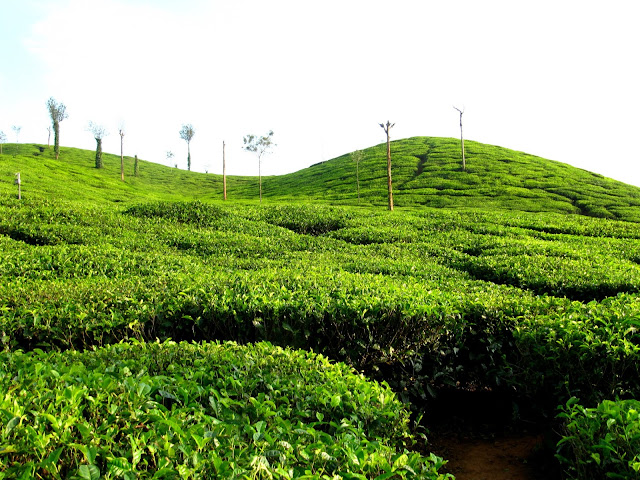 By nightfall we reached Sringeri, and we faced some issues with the online hotel booking, but it was resolved soon enough. There is a dearth of decent vegetarian eateries in Sringeri , which is  surprising considering the huge footfalls this place gets. First thing the next morning we decided to head towards Sirimane falls. Quickly had our breakfast and then headed towards this falls situated close to 15 kms from Sringeri via the temple town of Kigga. We reached just after the opening time at 8.30 and by the time we got into the beautiful falls, we practically had it all for ourselves. We had a nice massage session sitting under the gravity assisted water droplets. By the time we were done, it was already crowded. This particular water falls is regulated by the forest department, which has provided toilets and changing rooms, and hence collects an entry fee for the same. After returning back from the falls we went to have darshan at Sringeri temple, which has a very unique and an ancient architecture dating back to the 14th century AD. Went to the riverside where constant feeding by the devotees has resulted in a school of fish of giant shape and proportion. Had a free prasadha lunch at this place and then we moved to our next destination.


Next on our list were the little known temples of Inna and Mundkuru which were built by my ancestors. Since these temples were void of any crowd, it was a very peaceful and calming experience visiting these places of worship. On our way back to Uppinangadi we visited the 1000 pillar jain Basadi at Mudabidre, but this was a big let down, since for starters there were hardly 80-90 pillars in the temple, and they seemed to have hyped it up to increase the popularity. We were in and out of it within a matter of 10 mins. Finally we reached Uppinangadi by nightfall. Attended the family function the following day, and then a relaxing drive all the way back to Bangalore on a non-public-holiday - weekday :).