Bangladesh is one such country which many people wouldn't have visited. The main reason for negligible international tourist traffic into this country is the complete absence of world class monuments/places etc which would have attracted them in the first place. So on enquiring with numerous local residents on the places of interests, I always drew a blank. I had visited Bangladesh on 2 occasions and on both occasions it was for business purpose. The first impression of travelling in the streets of Dhaka is the frustrating traffic jams and next being people everywhere. And you can assume the gravity of the situation when the person describing this resides in Bangalore, a place where traffic jams are as common as the sun rising in the east. Bangladesh has the highest population density in the world (apart from the city states like Singapore etc ), hence as expected you cannot escape from the crowd.

Bangladesh is a muslim majority country (90%) and was liberated from Pakistan (with India's help), after the army of the present day Pakistan committed autocracies on the local Bangla people in the year 1971. In my opinion the population of Bangladesh identify themselves as Bengali first, rather than muslims. Hence this makes the majority of the population liberal in their thoughts. But unfortunately of late, this country has been in news for the assassinations carried out by IS agents, of famous bloggers who had been expressing their liberal views.

The foremost factors which can make Bangladesh very attractive among the tourists is the food and shopping. Food is primarily non-veg, hence making a person like me who is a vegetarian non-adventurous in exploring the various options. Shopping wise Bangladesh has numerous garment industries which supply clothes to various international chains all around the world. Hence you can expect to get a very good deal during your shopping endeavours. Further majority of the population understand/speak Hindi, because of their former connection to Pakistan and of late the popularity of the Bollywood movies.

Thanks to the population density and the narrow roads, the jams within the city are real pain in the ass. With a population of close to 168 million people, the only job centre in Bangladesh is the Dhaka city. Hence because of this everyone migrates to this lone city resulting in crumbling of its infrastructure. I was staying in the most upmarket area of Dhaka, the Gulshan region wherein you can find all the major embassies. Even in these areas I used to take close to an hour to traverse 8-9 kms. This city allows the usage of cycle rickshaws and when you augment that with the narrow roads, you end up with traffic moving at the pace of the cycle rickshaws. 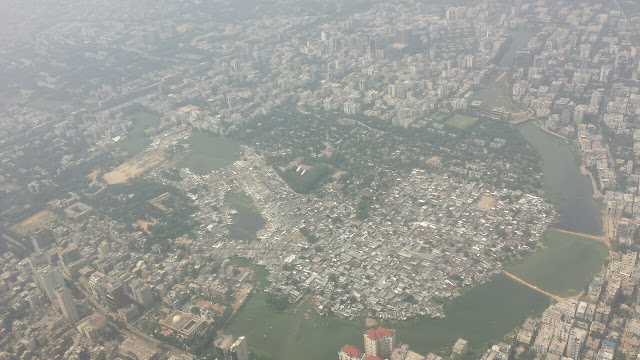 Anyway end of the day the people of Bangladesh are very warm and welcoming. And that is what really matters whenever you are visiting another country as a guest. And the single aspect wherein they impressed me, was the fact that they stand in queue for the lift everywhere, which unfortunately is not a practise in many countries including India. You can see greenery everywhere especially when flying over the city of Dhaka, due to the abundance of water especially from the Ganga and the Brahmaputra river flowing through the entire length and breadth of the country.
Posted by Unknown at 4:36 PM No comments:

Nagarhole : The Call Of the Wild 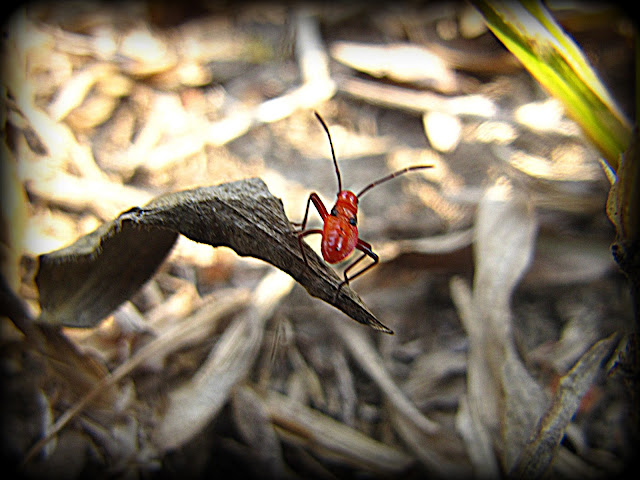 Nagarhole is projected as the national park with the highest density of tigers anywhere in India and therefore the chances of sighting a tiger in the wild is quite high. Hence getting attracted to the better odds and the best season for sighting (which being summer), we decided to make our way to Nagarhole forest. Finding accommodation inside the forest is a very expensive affair. There are some resorts near the Kabini reservoir and they charge a bomb for that. Hence we decided to find accommodation on the western side of the forest near to Kutta town. After our tour of Somnathapura we reached Mysore , had a sumptuous brunch at a cozy restaurant known as Jalpaan. 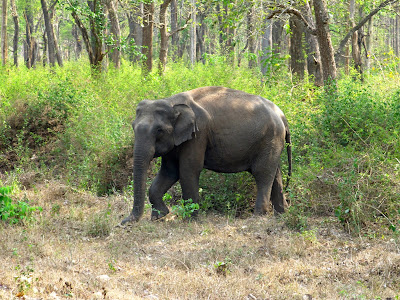 From Mysore we started towards Hunsur and after Hunsur we took a diversion towards Nagarhole national park. Sighting animals like spotted dears, elephants etc. is quite easy in this park even on the main public roads passing through it. Hence 2 wheelers are banned entry from this park , because there have been instances wherein elephants have attacked them. After registering at the check-post we entered the park, driving slowly and enjoying the ride. There were a lot of animals that we sighted even before we could reach the safari point. We saw loads of spotted dears, colourful birds and an elephant. 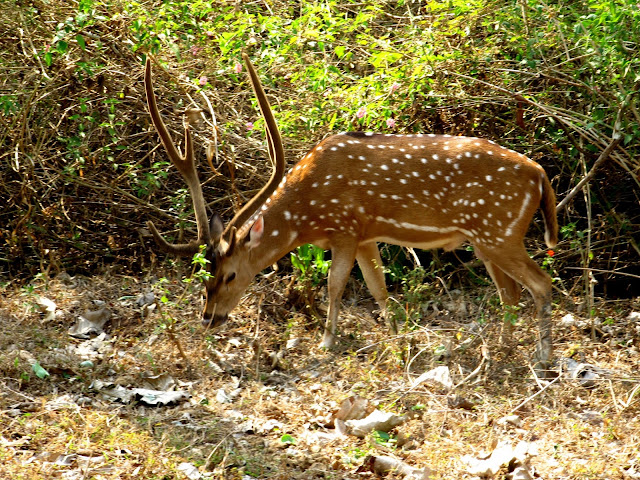 Once we reached the safari centre, we found that there was a huge crowd waiting for their turn. Safari in the evening starts at 3pm and 5pm is the last batch. After waiting for nearly an hour we got the safari ticket for the last batch, wherein they take us deep inside the jungle using mini-cabs run by the forest department. During this safari we spotted huge herds of spotted dears, sambhars, herd of elephants, peacocks, wild boars, bisons etc. Unfortunately no predators in sight. The safari lasted for an hour or so and costed 300 per person. Post safari we made our towards Kutta town , which comes as soon as the Nagarhole forest limits end. 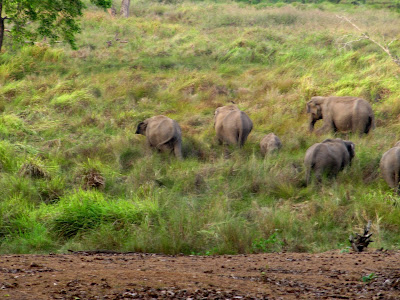 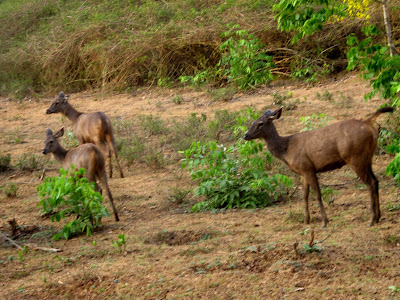 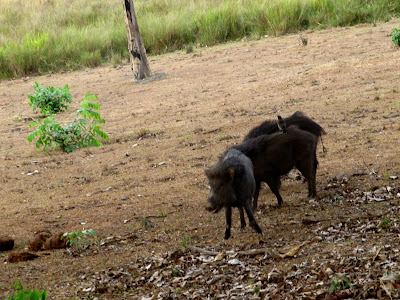 We had booked a room at Stay Simple Bison Manor, which I consider to be very good and value for money. It is around 2 kms from the town amidst coffee plantations, with decent roads all the way till the hotel. It is an old bungalow converted into a hotel and we really enjoyed the calm and serene surroundings. Night was chilly, even when Bangalore was shimmering with 35+ temperature. In the morning we went for a walk in the surrounding estate exploring the natural surroundings and came across thousands and thousands of coffee plant flowers in full bloom. It was a pretty sight to watch.

Following our breakfast, we moved towards Iruppu falls. Thanks to the long weekend the falls was teeming with tourists and the water flow was considerable less because of the summer season setting in. But still we enjoyed playing under the falls, getting gently massaged by the thousands of tiny water droplets. After spending an hour at this falls we decided to try our luck for safari at Kabini river lodge, wherein they take tourists in a different section of the forest, flanking the kabini river. But by the time we reached the place, we got to know that it was completely booked by the surrounding super luxurious resorts and there was no empty slots. Hence disappointed regarding not getting lucky with a second safari we made our way back to Mysore and then back to Bangalore. Being a wildlife lover who hates to see animals locked up in cages, my dream is to see an alpha - tiger in the wild , but unfortunately wasn't lucky this time around. Hopefully will get lucky the next time :).

Somnathapura : The Last Of The Hoysalas

Somnathpura is a hidden gem for those interested in temple architecture and  just about 140km from Bangalore. Even though the size of the canvas is not as big as those found in Belur or Halebid, the quality of the carvings in here can easily match those found in its more famous counterparts. Another important fact to remember is that, this is the last standing temple buitl by the Hoysala dynasty which is still preserved. This temple was built in the mid-13th century and it took nearly 50 years to complete this work of art. But the sad part is it was in use only for another 50 odd years before it was destroyed during the raids of Deccan sultanate. 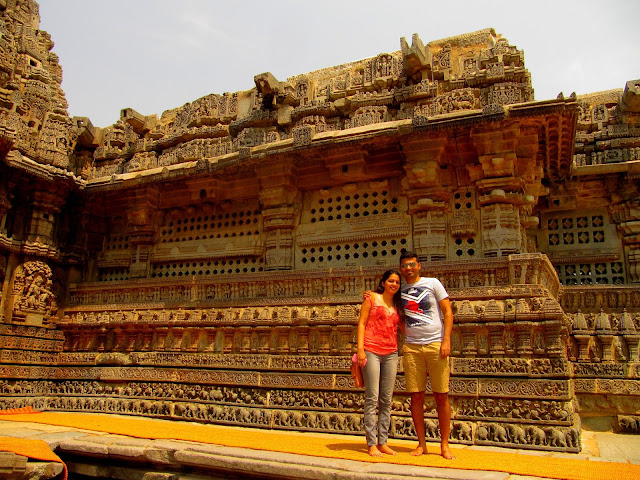 So on our way to Nagarhole, we decided to take a detour and visit Somanathapura too. The initial plan was to take Mysore road, have a great breakfast among the innumerable number of eateries lined up and then move towards Somanathapura via Maddur and Malavalli. But thanks to the long weekend, even before we could enter Mysore road we encountered a never ending jam. After consulting the google maps and getting to know the traffic snarls in this particular route leading all the way to Mysore , we made a quick getaway into NICE road and then into Kanakpura road. This was probably our best decision for the day. Kanakpura road had very minimal traffic and also well maintained. We averaged close to 90+ non-stop throughout the entire journey. But on the downside we couldn't find any decent eateries and hence had to reach Mysore for our brunch. 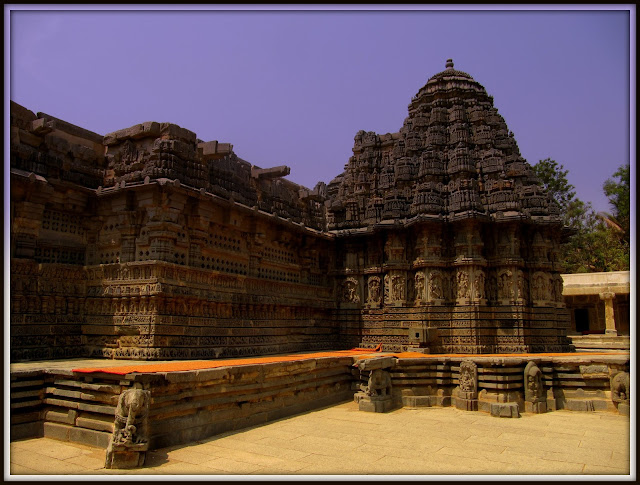 Anyhow just before reaching Mysore there is a diversion towards Somanathpura. This temple town was peaceful, with very minimal commercialization in sight. We employed a guide to take us around and to explain the intricacies of the place. He charged 300 bucks for his services. There are so many interesting features of this temple. For starters there are 3 garbagudis , arranged in a star formation which makes it all the more unique. For those interested to know Belur has 1, Halebidu has 2. Further this temple was not directly built by the ruling king, but by a local chieftain named Somanatha . Hence I assume there was pressure on him not to make this place grander than Belur or Halebid in terms of grandeur and scale. 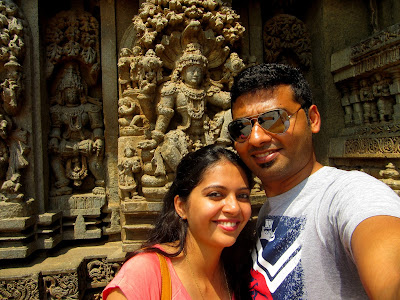 Some of this things which are etched on the walls include very detailed events from the Ramayana and the Mahabharatha. Some sections of the temple even has carvings from the Kamasutra. Hence according to the guide the walls of the temple acted as pages of knowledge for those who didnt know the art of reading and writing in that era. Hence hiring a govt certified guide will make things interesting. Another interesting aspect were the carvings on the roof of the temple. One can see the flower of a banana tree (considered to be very auspicious in Hinduism) shown in different stages of bloom.

After spending close to 2 hrs in this peaceful place it was time to move onwards on our journey. We finally got the opportunity to visit this after missing out on it for close to 4 previous trips.  I highly recommend visiting this place for 2 reasons. First for the unique temple architecture and second for the tranquil surroundings. 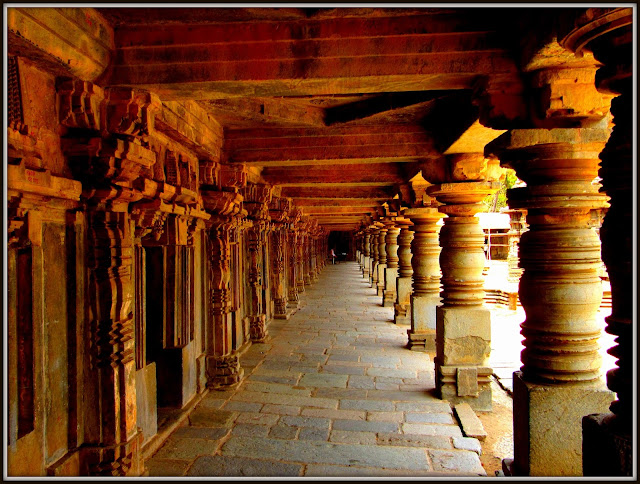