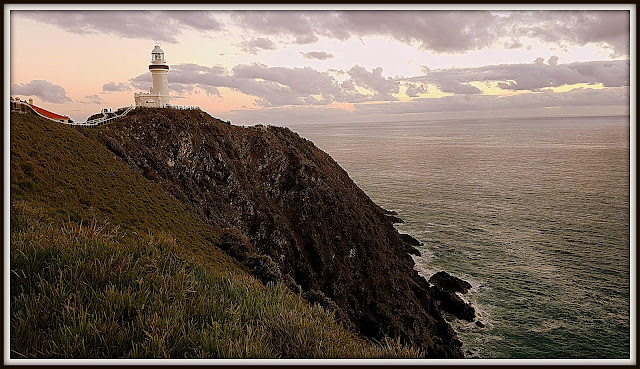 Australia is the land where the sun rises much earlier than majority of the civilized world and that makes it distinctive. But alas that was not enough for us. We wanted to visit the place where the sun comes up first, than the rest of the Australian landmass. The beautiful Byron Bay is the answer to it, the easternmost point of Australia. Byron Bay is around 160km from Brisbane on the Pacific Highway and beyond Gold Coast and in the state of New South Wales. 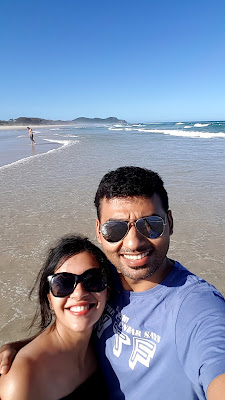 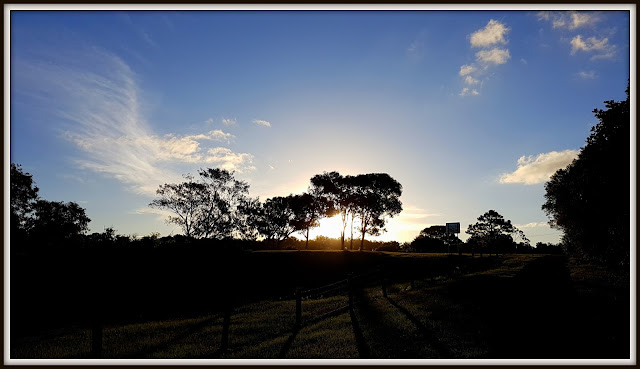 Since we wanted to catch the sunrise, we decided to drive to this place the previous day itself and camp for the night. It is illegal for one to camp unless in designated camping parks, where one is provided with site for camping, toilets, garbage bins etc to make it more eco friendly. Since we were visiting on a long weekend we could get one in Byron Holiday Park, which was decent enough, but not the best. Once we had settled and pitched our tents, we decided to visit the Tallows beach in the backyard of this holiday park. It is a good 2km walk from the park, taking us through some picture-some backwaters and grasslands. The Tallows beach on the other hand was huge and simply beautiful, with the Byron Bay lighthouse in the left end of the long beach. 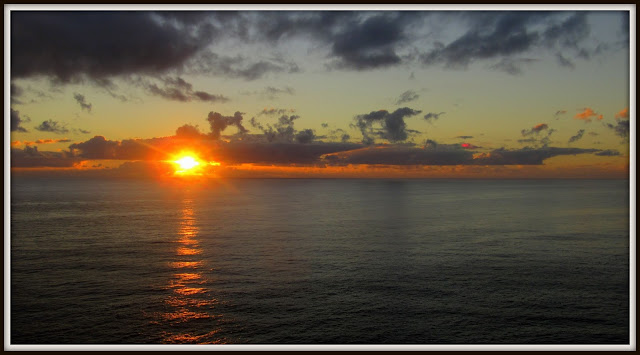 The next day we got up early before sunrise and drove all the way to the Cape Byron Lighthouse, which is the best place to catch the first rays of the sun. But unfortunately many other tourists too had the same idea and with very limited parking space near the top, it took us some time to find a spot, much further down the hill and walk all the way back. We were just in time to catch the views. The sky was not clear, but still we got some good views. Once the sun rose we explored the Lighthouse trail which starts from the Light house, hugging the coastline, giving some awesome views of the coast and the endless ocean. 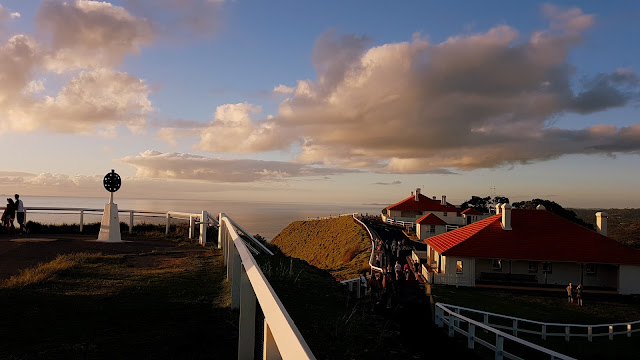 After checking out from our camping site, we decided to visit the main beach of Byron Bay, which was buzzing with activity. We enjoyed in the crystal clear waters of this beach, along with a large number of others who were there to enjoyed the pristine water even though we found a large number of mildly lethal blue bottle jellyfish carcasses washing ashore. After spending close to 2 hours in the water, we decided to explore the hinterland. We had lunch in a local Indian restaurant (Bombay to Byron) which was average, even after having such a unique and interesting name. 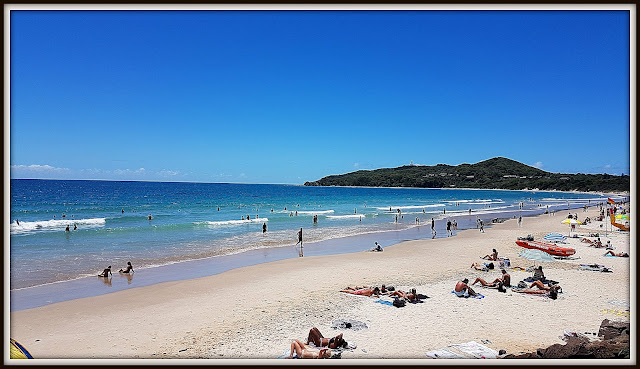 The two places we had decided to visit in the hinterland were the Minyon falls and the Rocky creek dam. The Minyon falls is around 35kms from the town, but the last 3-4 kms of the road leading to the falls is bad, unpaved and bumpy. Eventhough our sedan could take this road, it was a surprise coming across such a thing leading to a popular tourist attraction. Despite the roads being disappointing, the water falls was not. The cliff through which the water takes a plunge is very steep and easily gives one an episode of vertigo. According to my estimate it was easily a 150m fall, with near vertical mountain walls flanking it. I presume it might be a mecca for rock climbers. 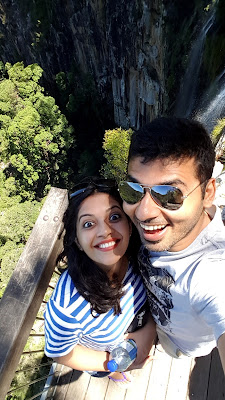 From the falls we moved towards the Rocky Creek Dam which is another 20kms. This dam supplies water to the town of Byron Bay. There are a lot of trails along backwaters of this dam. We spent some time exploring this area and then it was time to return back to our base. 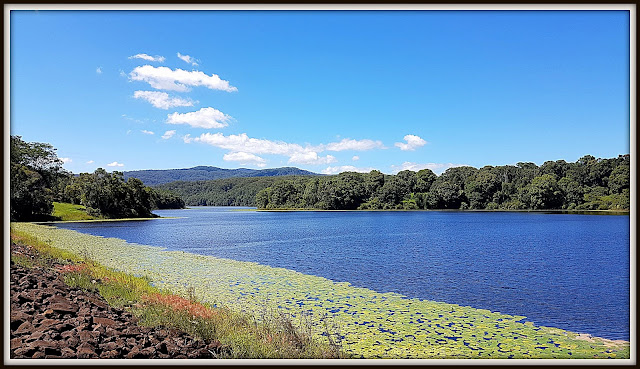 Posted by Unknown at 7:10 PM No comments: 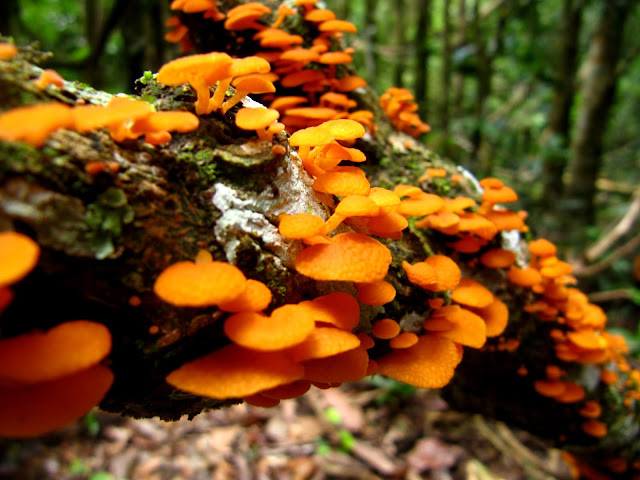 Lamington is one of the lesser known national parks in the Gold Coast hinterland, especially in comparison to its well known siblings such as Springbrook and Tamborine national parks. The infrastructure here are a tad lesser than the surrounding parks, which infact adds to the charm of the place, making it more in sync with the wilderness. This park has a narrow one lane road through the forest and very limited parking spots for those interested to explore this area. But that was exactly what made the drive through the rain-forest simply mind-blowing. 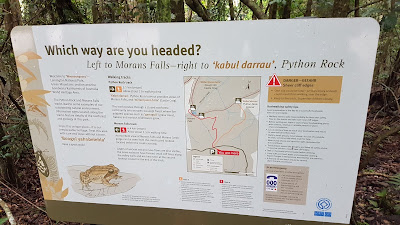 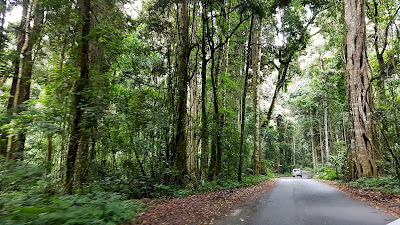 We had decided to explore 2 bushwalking trails. One which explores the Moran falls and the other which leads to the view from the Python rock. To reach the starting point of these trails one has to start towards O'Reilly's Rainforest Retreat, which is a resort in the middle of this rainforest. Just before one reaches this resort there is a small parking lot which signifies the start of both the trails. The left trail leads towards the falls and the one leading to the right leads towards the view point. 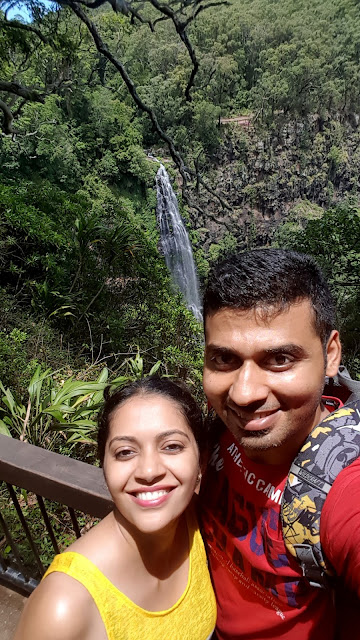 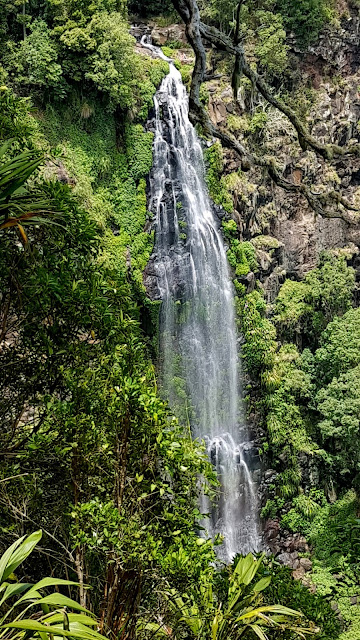 We decided to explore the falls trail first, which is 4.4km return and goes through some decent elevation. Initially one gets the frontal view point of the falls and trail further leads to the top of the falls and also giving some good views of the valley forged by its water. Moran falls was with decent amount of water, testament to the recent rains which had lashed these regions. But there is no opportunity to get into the water either on the top or at the foot of the falls. 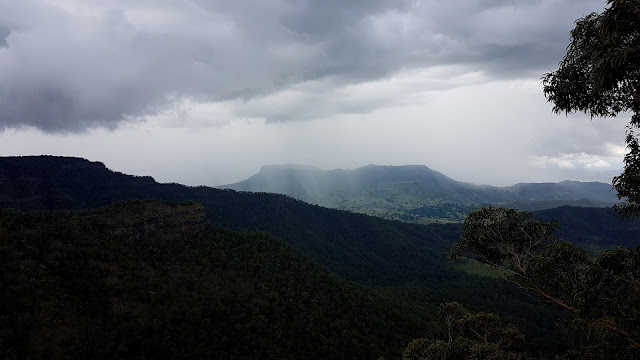 We returned back after taking close to 2 hrs and then we moved on towards the Python Rock trail. The return distance of 3.1km to the Python Rock goes through fairly flat terrain and can be completed in an hour. The views we got from this point was simply mindblowing especially of the rain laden clouds condensing over the nearby mountain ranges. Overall the hinterland regions of Gold Coast are a good place to visit especially in the peak summer, when the temperatures here are atleast 5-6 degrees cooler than the plains. 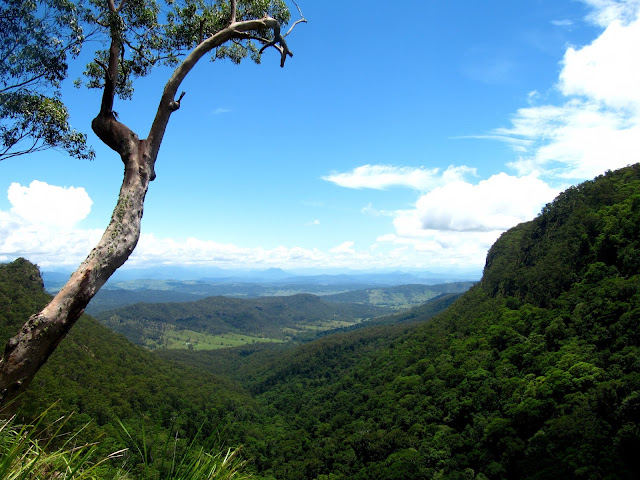 Posted by Unknown at 6:49 PM No comments: