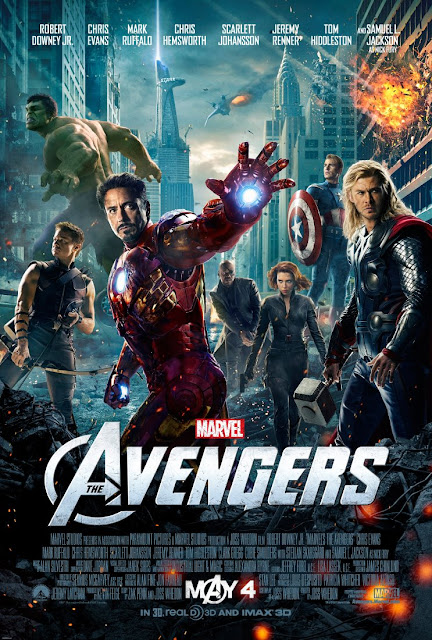 To begin with I want quell the first question that comes to everyone's mind and the answer is no, this has not bettered 'the Dark Knight'(the best superhero movie ever made) in any way. But on the other hand this can be considered as one of the best , taking it to the top 10 all time list. When compared to Dark Knight, what this lacks in intensity , it makes up with its wit and what it lacks in the overall storyline it makes up with its awesome special effects.

The all star cast comprises of superheroes reprising their roles such as Robert Downey Jr (Iron Man), Chris Evans (Captain America), Scarlett Johansson(Agent Ramonoff),Samuel Jackson(Nick Fury) and the Thor guy. Edward Norton is replaced by Mark Ruffalo as the Hulk and actually I like his take of Hulk better than that of Norton. A weak nervous guy and the hyper-destructive green half provides the perfect contrast. As with all the movies created with Marvel, the "Tesseract" is the primary focus of this movie. The power to rule the world , and the power to destroy nevertheless. And here enters Loki, the adopted brother of Thor and the prime antagonist of this movie. A promotion of sorts after being the negative character in the not so famous Thor movie. Loki is after the Tesseract in order to unlock the portal into a different world so as to bring his army down to conquer and rule the world.

Hence when matters look out of hand , Nick Fury the chief of S.H.I.E.L.D.S. assembles all the super heroes to work as a team to fight off the evil. But each superhero has a baggage of their own. They come with their high egos and pretty much none of them is a team player (I actually recalled a mba lecture abt how to work in a group :P ).  The first half of the movie focuses on the character development where there is frequent clashes between the superheros sometimes ego , sometimes physical like Hulk vs Thor, Thor vs Iron Man, Hulk vs Romanoff so on. But its the second half where all the action is. Loki gets his army via a portal and there is pretty much non-stop full blown action "The Avengers Vs Loki and his army" which takes place in the city of New York, so you can expect to see lot of things getting blown off. Even though in the second half there is lot of action , the one character which manages to shine through is The Hulk. Even with his loose cannon kinda action he manages to keep audiences in splits with his physical humor. Other than that the entire movie has some witty dialogue especially by Iron Man/Tony Stark. It kinda reminds me of the first Iron Man installment with all those one liners. Further we have "Robin" from HIMYM playing Nick Fury's assistant, probably her first big movie and you know Scarlett has some serious competition.

Coming to the special effects.. There is just one word... MINDBLOWING!!!!!!!. As mentioned the special effects are one of the USP's of the movie especially the second half, with gigantic monsters floating over Manhattan and what not. But I must confess the 3D seemed a bit half baked. Looks like they have added 3D in post processing and not actually filmed it keeping it in mind. Overall I would rate it a solid 4.25/5. A very entertaining movie even for non-action buffs.

Posted by Unknown at 9:56 PM No comments: