Having visited the nation's capital innumerable number of times, especially on transits into other regions, it was never a priority to visit all the attractions offered by the city in one go. Therefore I have visited many of its gems in smaller installments over the years. During this trip we visited the Jantar Mantar, the Lotus temple, Akshardham and  explored Chandni Chowk area. On the first day of our trip, prior to boarding our Shatabdi to Amritsar we had some time to explore near the NDLS railway station. Hence we decided to head towards the Jantar Mantar. Build in the year 1723 , this marvelous monument was used in the field of astronomy such as finding the time of the day based on the sun's shadows, position of the sun , moon and the planets for the Indian field of astrology and so on. Even though this site is quite small , right in the middle of the urban New Delhi, it was a respite from the afternoon heat. Spent close to 2 hours exploring this monument. There is also a cloak room available near the entrance.

Once we were back from Amritsar, we decided to explore Akshardham temple. We had booked a room in the Paharganj area which is a numero uno  destination for backpackers, with all sorts of accommodations available and just a stone's throw away from the NDLS station. We took a metro to the Akshardham station and after a fool-proof security check, which could even make the airport security check-ups blush in shame , we were let into this modern wonder of Delhi. The things which are prohibited inside pretty much include everything, including phones, cameras, food etc. There are primarily 5 interesting attractions inside this temple complex. 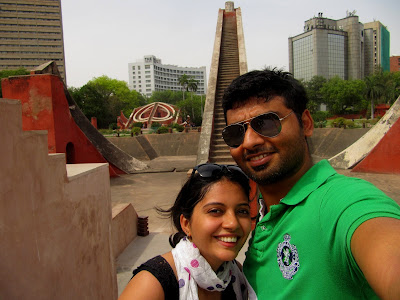 The first one is the huge temple itself, which sits in the center of the complex. Made out of sandstone, this temple seems to be inspired by all the ancient temple architectures of India. For starters the star shaped structure of the temple is inspired by the Hoysala architecture and so is the outer walls. The inner walls are made out of pure white marble and simply spellbinding in every sense. The intricacy with which the walls and the roofs are carved are simply mind blowing. This monument looks more majestic once it is lit up in the night. The other attractions include the 3 exhibition areas. Akshardham temple is actually dedicated to a certain person known as Swaminarayana. Hence majority of the exhibition area is dedicated to increase his popularity, and seemed more like a propaganda material , glorifying his life to astronomical proportions. The first 2 exhibitions which included the giant screen movie and the series of exhibits using animatronic figures illustrating his life , was a bit boring. However the indoor boat ride exhibition explaining the scientific achievements and the history of India was interesting , mainly because it had nothing to do with Swaminarayan.

Finally the day ended with the spectacular sound and light show aided by the some high quality pyrotechnics. This show starts at 7.45 after sunset , in the open air theater. It lasts for around 25 mins and quality is as good as those shown in Singapore, if not better. However sadly all these things couldn't be captured by us , since as I said camera's and phones are strictly banned and have to be deposited at the entrance counter. 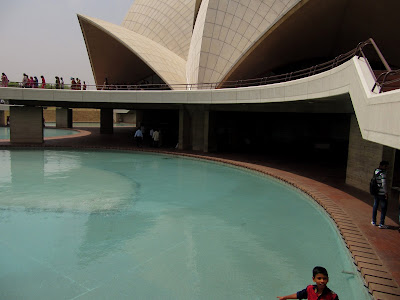 The following day before we could head towards Agra, we decided to head towards the Lotus temple. On the way our taxi driver took us to Dilli Haat area which is especially good to buy any souvenirs and other handicraft items. From there we were dropped near the Lotus temple entrance. Unfortunately came to know that the there is no luggage cloak room and they don't allow heavy baggage inside the premises. Hence we had to split, with one person visiting the monument and the other looking after the baggage. The temple was peaceful, dedicated to the Bahay faith and was designed in an elegant way. There is also a turquoise colored pool at its base.

Finally before we caught our flight back to Bangalore, we got an opportunity to explore the Chandni Chowk area. The missus was content shopping and I was content gorging on some lip smacking street food, especially in the paratha-wala gali deep inside the narrow lanes of Chandni chowk :).