Kahani : The Rise Of Vidya Balan 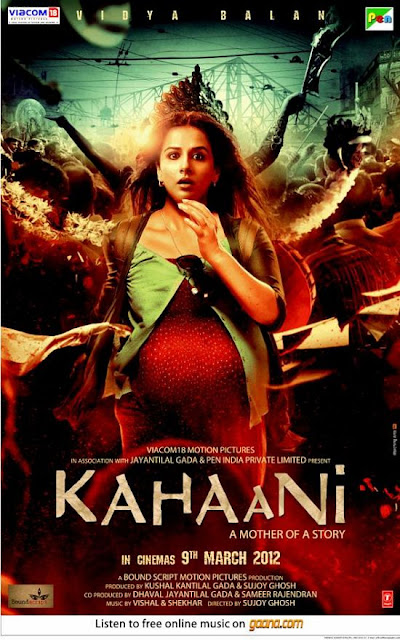 Vidya Balan is on a roll with her roles. And looks like having Vidya as a prime protagonist in a movie is also raking in all the moolah, not once (which can be termed as one time wonder) but twice that too back to back. Even-though I didn like "Dirty Picture" as much as reviews made it out to be, "Kahaani" is something which I loved especially for the story line. Even though I got the feeling that this movie was a bit inspired by some western movies, the fact that I couldnt pin point the exact movie makes up for the talent of the writer/director. (Similiarly the great SD Burman got inspired by some brazilian/latino music and composed the tune for "Mere Sapno Ki Rani", but the fact that even if you listen to both the tunes together you cant confirm the inspiration---- That is talent :)  )

Movie starts with the Vidya Bagchi(Vidya Balan) a heavily pregnant women,  landing in Kolkata from London in search of her husband who is missing from the past 2 weeks. When she starts visiting the places frequented by her husband, everyone denies having seen/met her husband. But she is determined in finding the fate of her husband , but the locals think that either her husband has left her for good or she is imagining things that never existed in the first place. The story telling is done in a great fashion, as and when the story unfolds a new layer is revealed. Even though the professional reviewers hailed the cinematography as top notch, exposing the underbelly of Kolkata I couldnt find anything striking or unique.

Thankfully there are no song and dance routine in the thriller/serious movie which makes it all the more gripping. I can understand item numbers in masala movies popping out at random times, but when such a thing happens in a serious thriller then it would surely messes up the intensity , which was the case with "Chikni Chameli" shocker in the latest Agneepath. The actor playing Sub-Inspector Rana does a commendable supporting role (the closest thing to a male hero u get in this movie :P). Even though there are some plot holes in this movie, considering the entire package it can be forgotten with ease. Overall I would rate the movie a 4.5/5, with the majority of it being for the storyline , followed by Vidya's acting. The best bollywood movie of 2012 so far. Dont miss it.
Posted by Unknown at 2:35 PM No comments:

Kudremukh TreK : A Tale Of Sweat,Tear,Tan and Sunburn


Woah !!!! no travelogues from my side from the past 4 months... got to be some sort of personal record. But as quoted by some unknown person "The only thing constant in life is change", a very big and expensive change indeed :P. Initial plan was to trek to the mysterious Ombattu Gudda which has eluded us for the past 2 years, but due to an unfortunate incident of a fellow trekker meeting his end and the forest officials on their toes, made us to look at some alternate options. After a lot of speculations finally it was decided to trek to Kudremukh and Kurinjal Peaks on 2 successive days. Since Kudremukh area was recently converted to a tiger reserve, there were rumors that this peak might be shut down permanently for trekkers , hence we were a bit keen to cover this easy trek as early as possible even though the season we had chosen to go was a bit unconventional, with pretty much everyone getting a tan under the hot sun in the open grasslands and some even getting sun-burns :P. 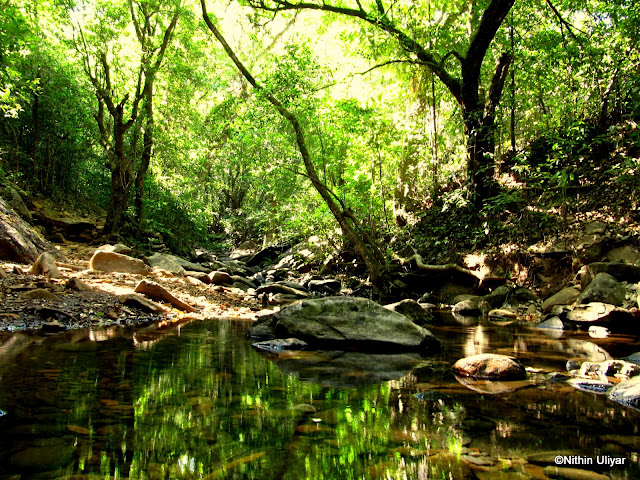 As is the norm wrt our weekend treks we (Shravan, Shashi, Vineeth, PPR, Umesh, Raghu and Myself) left Bangalore on friday night (2 Mar 2012) on a 10.45 pm KSRTC Volvo bus to Kalasa. We had expected this to be a dry - hot season but as soon as we got down at Kalasa, 6am in the morning, it was literally freezing. Surprisingly the interiors of the ac bus seemed warmer than the outside climate at Kalasa. Kalasa town at this time of the day was pretty much deserted, with a few shops selling tea/coffee just opening up. We had previously contacted  Satish , a trek organizer cum home stay owner who stays on the fringes of Kudremukh Wildlife santuary. He had given the directions to reach his place , the first stage of which was to catch a bus to Balagal which was around 15 kms from Kalasa. The first local bus was at 6.30 am. 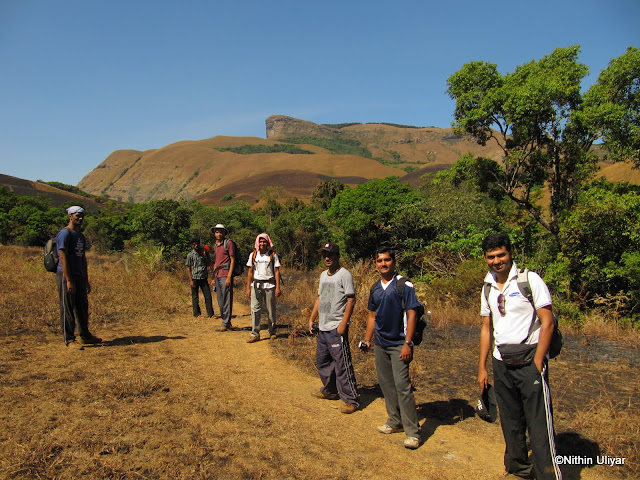 Landed at Ballagel to continue towards Satish's home at Mullodi, but now the route was through rough terrain and the means was a 4x4 Mahindra Jeep. Reached Satish's home, which was a traditional village home with tiles for roofing and red oxide flooring. Finished our morning chores and had out breakfast for the day. Unlimited Idlis ...  A "stuff till you burppp" invitation :P.

After that we started the trek at around 9 am. Loaded with water and our afternoon lunch. Since this was a protected forest, one needs to take prior permission from the forest office at Kudremukh town. For us this was arranged by Satish himself, but unfortunately one doesn't get permission to camp overnight. Hence one has to trek the entire 20km or odd km in a single day, even then this trek can be termed as an easy one. Initial part of the trek was alternating between grasslands and shaded forests. Within the shaded forests we came across quite a few water bodies , so I guess water wouldnt be a problem even in the summer seasons. The name of the peak was kept so, since it supposedly resembles a Horse's face, but to me it resembled more of a human's nose... a very big nose indeed :P. 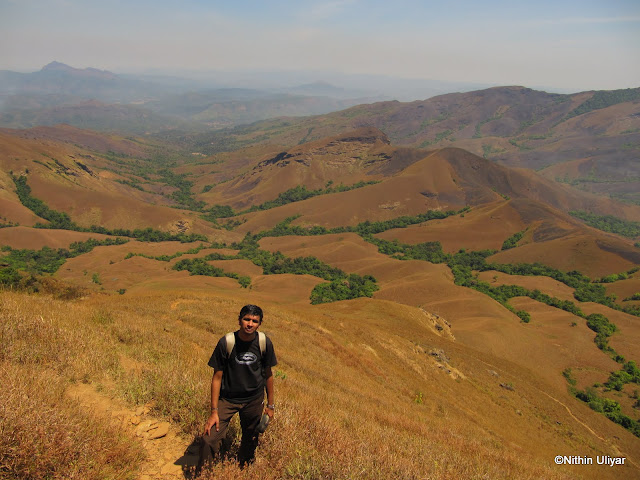 But by this time the temperature was soaring and we were getting roasted in this weather. It was really a freak weather condition, freezing mornings and nights and extreme heat in the afternoons. Even then the views were pretty decent , and with the bright sun its pretty much a treat for photographers with deep blue sky against brown grasslands offering a very contrasting image. Some mountains were even turned to black thanks to grassland fires that seems to be starting by itself every now and then, at some random location and we were witness to such fires quite a number of times.


Atleast in such conditions one would expect the participants to be properly prepared with caps, glasses etc but Vineeth, Shashi and Shravan didnt even bother to get one. In the end they were more or less the worst hit. Technically speaking this route doesnt require a guide with the route pretty much straight forward, but a guides presence ensures that you can access some hidden watering holes which are plentiful enroute. After trekking continuously for about 4hrs we hit the peak at around 1 pm. Having conquered the second tallest peak in Karnataka at 1894 m. Of the 10 km we trekked from Mullodi village only the final 3 km can be termed as a climb with the rest of the distance being just a walk along a flat gradient. The view from the top was pretty mesmerizing. On one side you had endless grasslands and on the other we had endless mist/cloud filled regions which we couldnt make out whether it was land or (quite preposterous as it might sound) 'the Arabian Sea' :). The only animal sighting we had during this trek was what looked like a giant Malabar squirrel :). 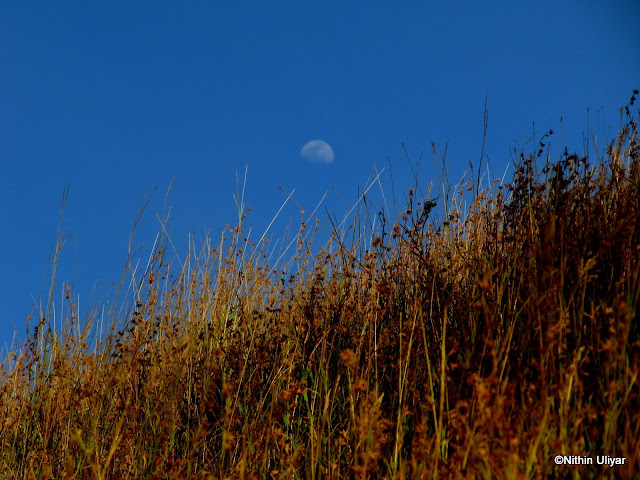 After spending 15 mins near the peak we started descending and our guide took us on a detour to have our lunch. The lunch spot was a cozy place in the afternoon sun, with trees for shade and a stream gurgling beside it. We spent close to an hour having our lunch and relaxing under the shade. After resting we descended the peak pretty quickly and at around 5 pm we reached back to Satish's home, taking 8 hrs to complete the trek. We then went to a small waterfalls nearby (Somavathi Falls), spent some time having a dip in the chilled water. Spent the remainder of the day indoors playing UNO pretty much until the middle of the night.

Woke up the next day, and we were still planning to attempt Kurinjal trek. But when Satish informed us that we might have to spend 275 bucks/head again (we paid that amount for Kudremukh permission, dont know to what extent we got ripped :P ) for permission to this relatively unknown trek, the majority of the gang was against this trek and with Raghu having a mild sprain it was finally decided that we would spend the day checking out nearby places. First destination was Hanumagundi Falls and we got a direct local bus from Balegal. After descending a lot of steps we reached the falls, which eventhough had lesser quantity of water looked gorgeous. We explored a path which went to the top of the falls , which quite frankly was quite a taxing climb. Finally at around 12.30 noon we were about to leave this place for Horanadu after getting to know that there were no more places worth visiting.

Reached Kalasa at around 2.20 pm, went to the best restaurant in the town which was Hotel Suprabha which was pretty decent. Caught a bus to Horanadu, reached within half an hour , rented a room in the temple premises and spent the rest of the day sleeping , visiting temple and roaming around. Finally at around 10.15 pm caught the Volvo bus to Bangalore and reached Bangalore sharply at 5 am in the morning. This was how a quarter break was spent in a life of a poor management grad. The things people do to breathe in some fresh forest/grassland air, quite insane indeed :P.