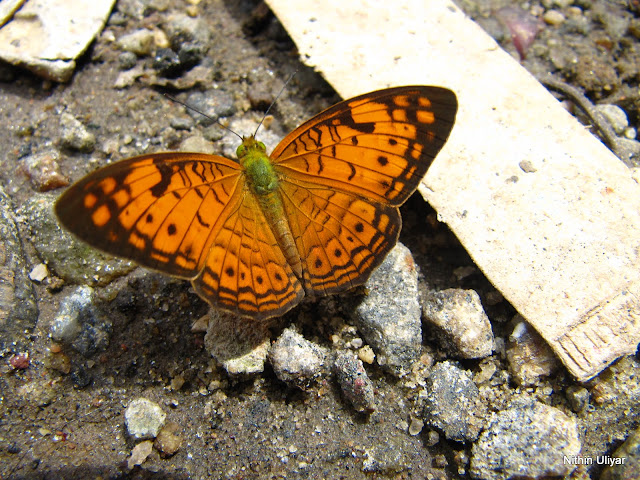 Off late our bike rides are finding very few takers , and considering the number of disastors happening in the last few months one wouldnt blame them. More or less this has not been a good year for biking, with only 3 successful bike trips(including this one) against 7 last year. For this ride to Kasargod too we had a hard time getting the number of bikers to a respectable number, not that the guys are less enthuiastic about biking, various circumstances like being out of the country , not getting the necessary permission from home etc etc. In the end we had 4 guys ready for the bike trip (Manju, Santhosh, Nagesh and Myself) on 3 bikes.

The plan was to go to Kasaragod via Bhagamandala and come back via Hassan completing a circle at reaching Bangalore. I had been to most of the sight seeing places we had planned , since my moms hometown is very close to Kasargod town on the Karnataka-Kerala border, but I had never biked to this place so this was a trip down memory lane for me. An unadulterated biking experience :).

Old habits die hard, and having no further comments we left Bangalore only at around 9 pm a good 3 hours behind schedule. Even after doing this stretch 'n' number of times , riding again in the same conditions and same time of the day doesnt make it less exciting. Met the others at Kengeri and started towards Mysore. The weather was very pleasant, just on the verge of a full fledged winter.
Had our dinner at the completely desolate Kaadu Mane.... I presume that this hotel is not popular compared to other hotels enroute(Kamats, MTR etc) and the food was ok, nothing much to write about. After taking breaks at regular intervals we finally managed to reach Mysore at 1 am and went directly to Govardhan Hotel (our usual bunking place in Mysore :P ) since we didnt have the patience to search for hotels in this graveyard shift. Got a dormitory type room and we snoozed the night off.
Day 2
30th Oct 2010
Mysore->Bylakuppe->Madikeri->Bhagamandala->Kasaragod (270kms) 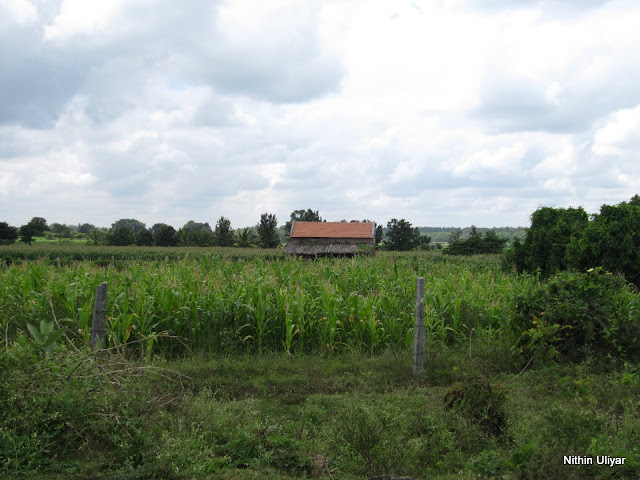 Having slept pretty late the previous night we had no chance of leaving early, so taking our own time at getting ready we managed to leave Mysore only at around 9 am. The sun was up in the sky and at regular intervals there was cloudy periods the entire day which is really a blessing when riding in a bright sun.
The ride from Mysore  was smooth... Roads perfect. With a double road accompanying us some 30 kms from the city and after that a normal 2 lane road, winding left and right smoothly. By around 11.30 am we reached Bylakuppe. Here we need to take a diversion to the right for some 7 kms for the famous Golden Temple. This Tibetan monastery is very famous in this part of the world and I was wondering why have these refugees settled so far away from their home town. But on a serious note it must be really frustrating to flee ones own land and live in other country where I dont think they feel at home. 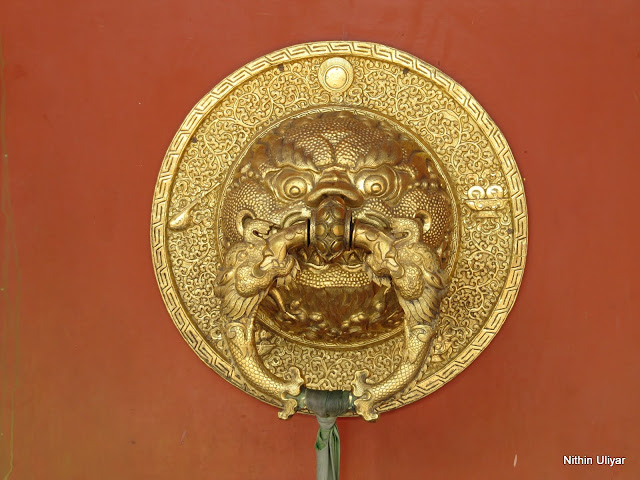 As we parked our vehicles and went inside the temple premises , we got to witness the beauty of this place. The entire premises was soothing to ones soul.Also it was interesting to witness the buddhist culture so near to ours but still far apart. Went inside the main temple where there are huge statues (20 feet tall) of Buddha and his various avathara's. Spent nearly 2 hours exploring the premises, explored the gifts shops opposite to the temple and had our first taste of tibetan food. We tasted Veg Momo's, I would say a bit blunt for Indian tastes. Further had  various types of noodles/soup. 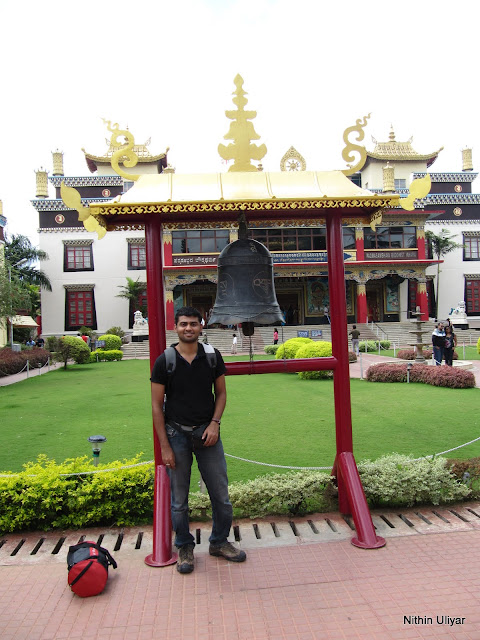 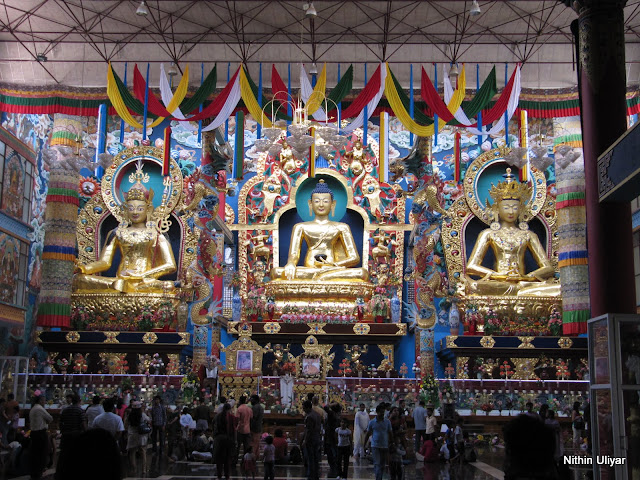 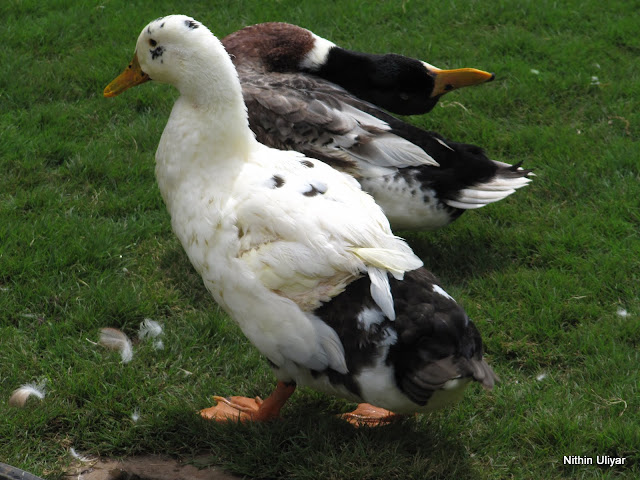 At around 2.30 pm we left this place towards Madikeri. The roads on this sides of the ghats were wide , winding and awesome. We rode at a good pace and reached Madikeri and without any stop at this place moved towards Talakaveri , the birth place of river Cauvery which is a good 45 kms from this town. The roads after Madikeri goes to dogs and there are huge craters on the entire path. Took a diversion towards Bhagamandala some 2 kms after Madikeri and the roads become very narrow. The road conditions were decent. Just then the clouds open up and we were caught up in a downpour. We stopped at Bhagamandala and were mulling our options whether to continue towards Talacauvery and further towards Kasaragod the same night. The tea stall guy nearby informed us that the road to Kasaragod is via a dense jungle and it might not be a good idea to ride after dark in such heavy rains.
After a bit the rains subsidized and decided to continue on. We first moved towards Talacauvery , but were stopped at the base by cops saying vehicle moment is banned after 6 pm and it was very close to that. Disappointed we moved on since the views from the top of Talacauvery was simply awesome for both the times I had visited this place. 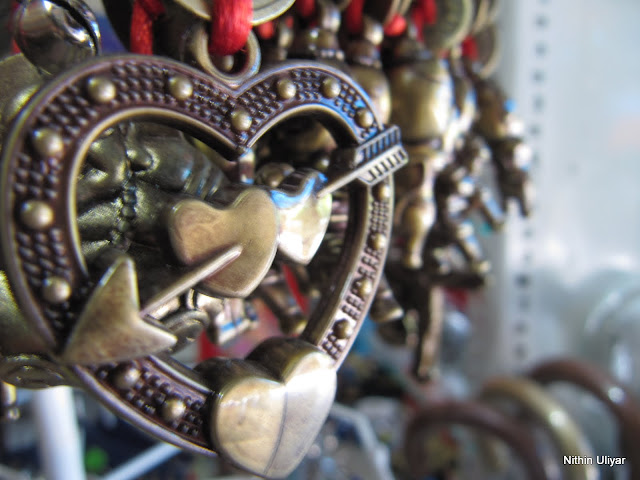 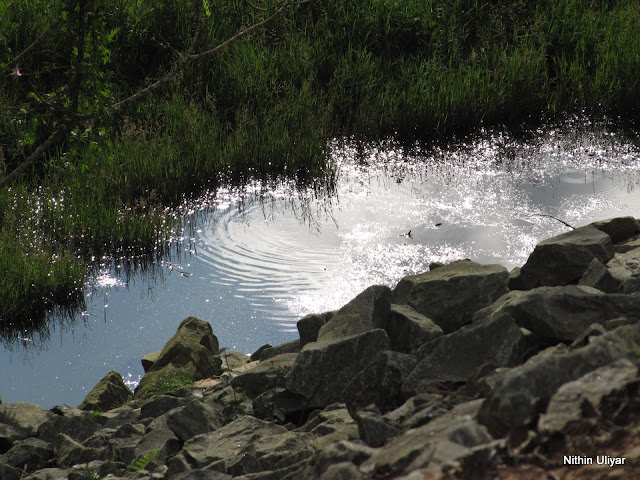 From Bhagamandala we entered the Talacauvery Reserve forest. This forest is as dense as one could possibly be in the western ghats. There is 6 ft wide single lane road running the entire distance to Panathur. The road condition is decent with few potholes here and there. Soon enough the rains started again and we were riding through the dense forest and by this time the the sun light had completely faded out. Given the small road, absense of sunlight and the dense jungle surrounding us we were getting a feelling of riding through a tunnel, a tunnel made of trees. This ride of around 35 kms to Panathur was simply awesome and the high point of the ride. The vehicular traffic on this road is very minimum and could be counted with ones fingers. 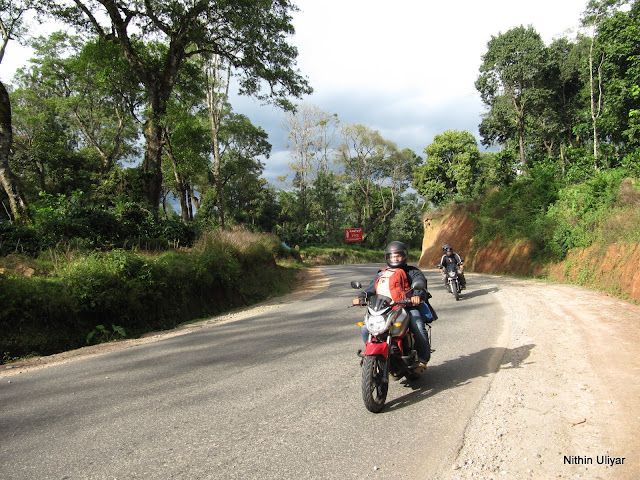 We reached Panathur which signifies the end of the forest and beginning of Kerala state. From here onwards we were back to civilization. Totally drenched in rain we moved further. But by this time one of the guys received a call of an emergency at home. So he decided to return back to Bangalore by taking some bus or taxi from Kasargod the same day. The road till Kanhangad is good, but after that it was so damn hopeless and added to that vehicular traffic was at its peak making it a forgetable ride. At around 11.30 pm we reached Kasaragod, but the last bus to Bangalore had long departed at 9.30 pm. So having no other option we decided to cut short the trip and return to Bangalore the next day in bikes.
Day 3:
31st Oct 2010
Kasaragod->Jalsoor->Sullia->Madikeri->Mysore->Bangalore (360 kms)
One of the most popular places to visit is the Bekal Fort some 15 kms from the Kasargod city. I had been to this place some 2 years back and this place is perched right at the coast giving a awesome strategic view of the sea, beaches and the rocks below. An awesome sunset at this place is surely guarenteed. One can explore this place in some couple of hours. The song "Tu Hi Re" from the film Bombay was shot at this place only. 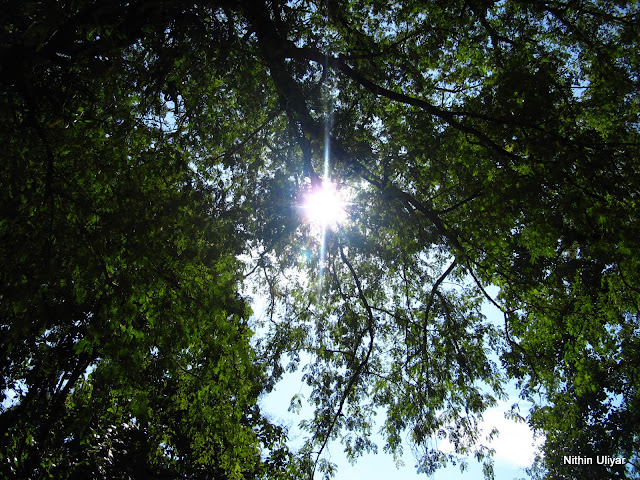 We got up at around 7.30 am and got ready to leave directly to Bangalore without any pit stops enroute. Left Kasargod at around 8.30 am and decided to take the better and shorter route to Bangalore via Jalsoor. Drove on the NH-17 till Cherkala and here we took a left and we were on the awesome road to Jalsoor. I had been on this road so many times, but never on my bike. Again this route is surrounded by dense jungles and small hamlets enroute. After Jalsoor we entered the Mangalore - Madikeri route and this was disappointing. Our pace slowed down a lot negotiating the potholes and the fact that we were climbing up the ghats didnt make matters better. The views at ghats were beautiful as always. After Madikeri the roads become good and from here onwards we had a non-stop ride to Bangalore with pit stops at Kushalnagar for lunch and snacks at Maddur (the famous Maddur vade). 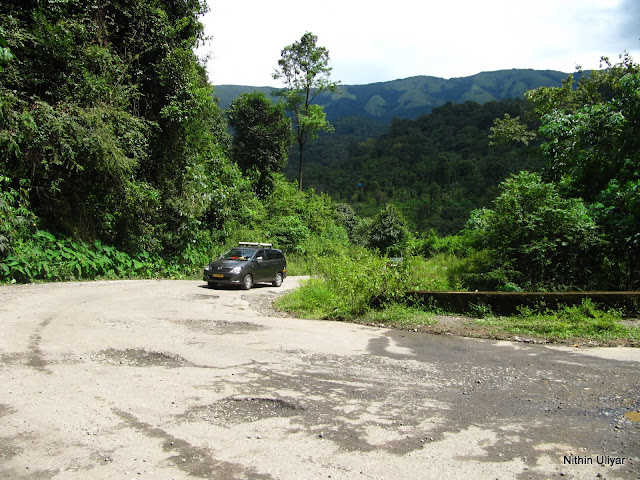 The total ride distance on this day was close to 360 kms the longest I have driven in a single day. Even though the others kept swapping, I rode the entire distance since I am more or less scared sitting pillion in a bike when riding at speeds of 70+ :P. And to be frank I was not tired at all, apart from the horrible pain in the bottom due to hopeless pulsar seats offering very little cushioning. We reached Bangalore at around 6.30 in the evening, completing the journey in around 10 hrs. 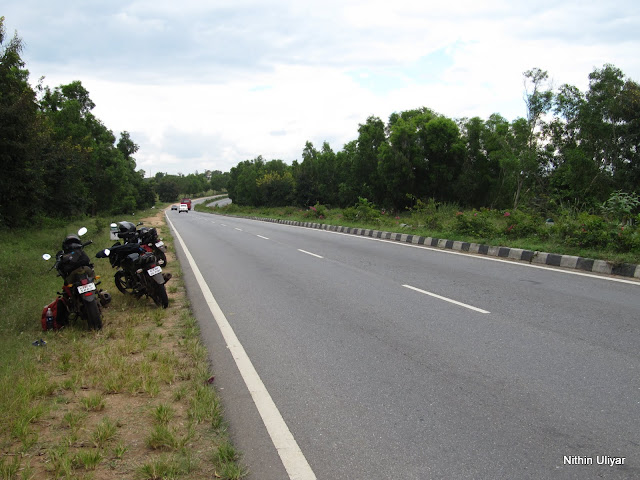 In the end our biking urges were satisfied. It had been a long time since we had a pretty successful ride and not sure when will we again go on such a long ride. Would like to end this post with a funky quote so appropriate to biking :P

"Riding a bike is like watching a 3-D movie, you get all those special effects which is absent while driving a 4-wheeler" 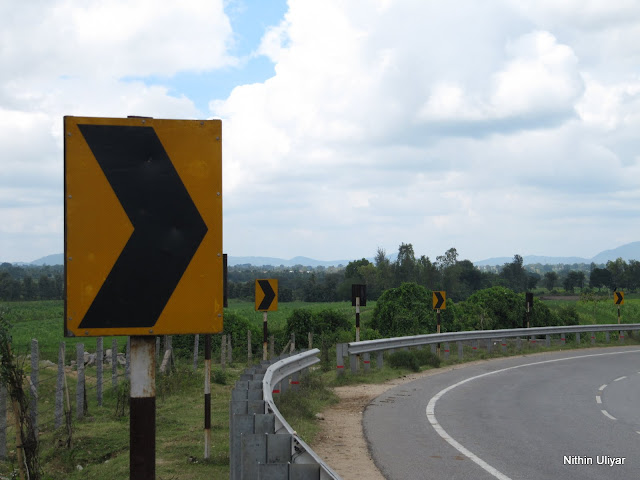