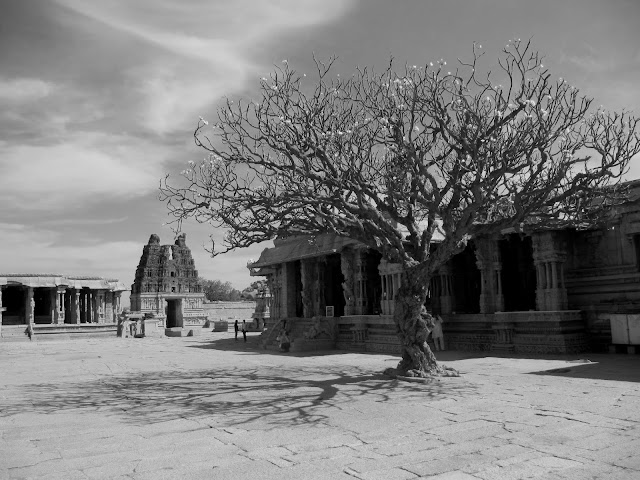 If one has to short-list the best heritage sites in India, then Hampi would definitely be in the top 3. Imagine an entire city dating back to the 16th century, preserved in a pretty decent condition. The time required to explore these ruins can vary anywhere from a single day to even a week. It all depends on one's interest and patience to keep on exploring. For lesser mortals like me, a couple of days would be sufficient , because after that one becomes saturated with an overdose of temple ruins. Moreover this was my second visit to this world heritage site after a gap of nearly 5 years. Hence I was the de-facto guide :P. 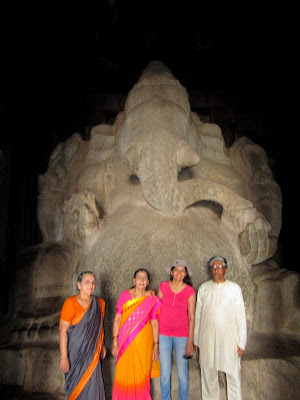 After having breakfast from a darshini in Hospet we drove to Hampi which is at a distance of around 14km. Hospet actually has more stay and food options when in comparison with Hampi, since there are certain restrictions for construction within the protected area. After driving through lush green fields we reached the core of Hampi, the Virupakshi temple. This is one of the only temples within Hampi, wherein daily pooja takes place and also from where one can hire guides, autos etc. This 16th century temple complex is huge especially the main gopura. Interestingly Hampi was one of the largest cities in the world during its prime. According to some estimates it was the second largest in the world during its prime in  early 16th century.  It was laid to ruins during the raid of the Deccan Sultanates, who defeated the Vijayanagara empire in late 16th century. 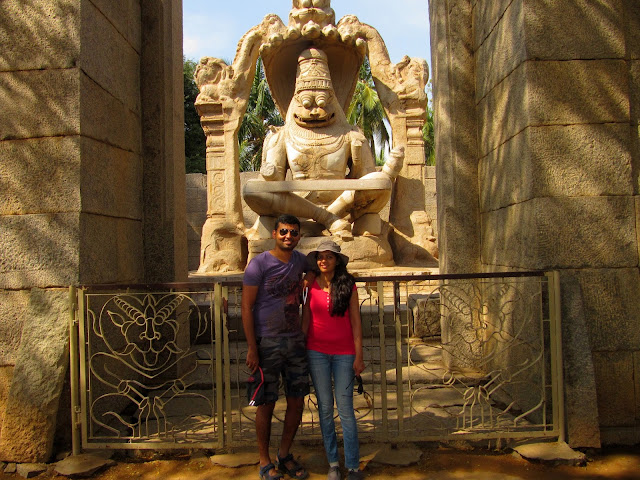 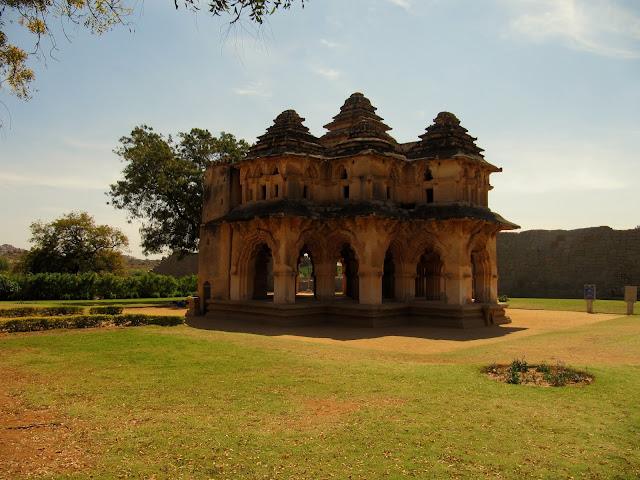 Hampi is like a goldmine for people who are interested in ancient architecture. Since we had already covered Badami, Aihole, Pattadakal and Bijpaur so far in this trip, we were a bit saturated. Hence it was decided to visit the major sites of interest and finish Hampi within a day. When in Hampi, in any direction you look, you can find a monument , gleaming with glory. We explored the inner sanctum of Virupakshi temple, including the room which acts as a pin hole camera, projecting an inverted image of the main gopura on a wall. We even visited the banks of River Tungabhadra. As expected tourists would be pestered by people, who would offer to be their guide in the surroundings of Virupakshi temple, but once you leave this place you can explore the other sites in peace.

Our first stop was the Kadilekalu Ganesha, which is a very huge Ganesha statue, fully enclosed. From there we moved to the Krishna temple. This temple was peaceful, in contrast with the hustle and bustle of Virupaskhi temple. We explored the outer walls and the inner sanctum , which however is void of any deity.  From Krishna temple we moved to the Ugranarasimha statue, which unfortunately has its hands chopped off, probably during the raid. Nearby is the giant Shivalinga which is always submerged in water due to the fact that it is built on a flowing water channel. Moving further we came across temple which is projected to be underground, but the fact is it is built just below the normal ground level and nothing more. This temple was always flooded with water, on both the occasions that I have visited it.

The next destination was the royal enclosure , which used to house the members of the royal family and their servants, guards etc. This place is ticketed and once we enter this place one can get a good idea of the type of palaces that used to exist within this high walled enclosure. There is the most prominent Lotus Mahal and bases of other buildings which have subsequently crumbled. According to legend each of these buildings used to house a different wife of the King. Behind the Queen's palace is the huge elephant stable. On top of stable is a lot of symbolism used, pertaining to different religions. Hindusim , Islam, Jain, and Buddhism have been projected showing the tolerant nature of the Vijayanagara empire. There is also an ASI museum within this high walled enclosure and it was mildly interesting, having very old photos of the monuments when they were just discovered and before restoring them to the present state. 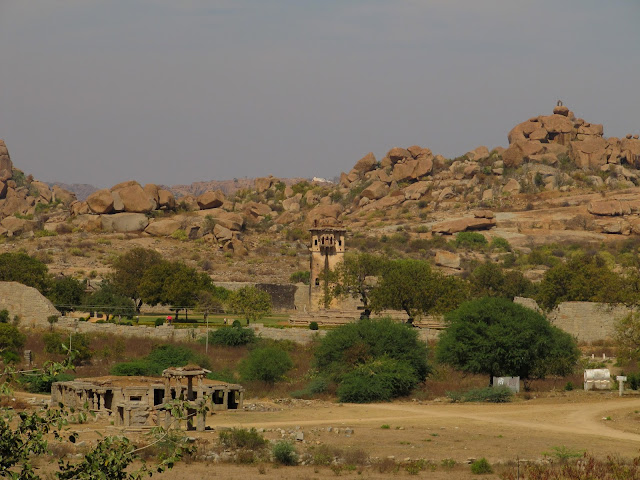 From the personal area , we moved towards the official area. This area mainly comprises of buildings wherein the King used to conduct his official business. These included the Mahanavami Dibba, the underground secret meeting room and the pushkarni, apart from the ruins of other buildings. One gets a good birds eye view of the surrounding structures from the top of Mahanavami Dibba, which infact was built to celebrate the victory of King Krishnadevaraya, over a kingdom in present day Orissa. We visited other nearby location which included a grand Queens bath. One thing which did bother me was the distance between the queen's palace and the queen's bath !!!!! :D :D 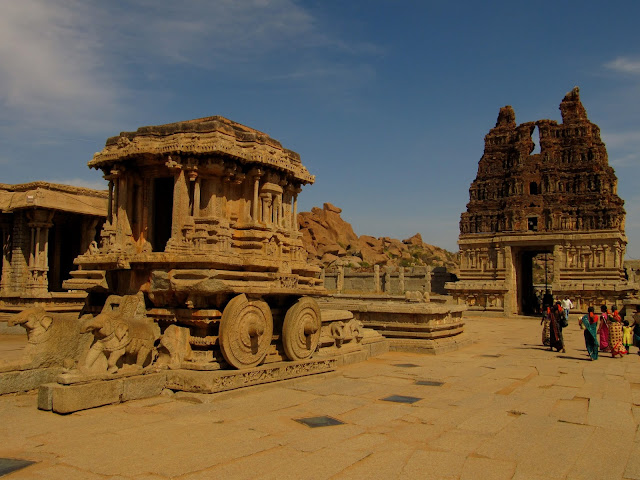 And after finishing all these places, it was time to visit the icon of Hampi. The stone chariot enclosed within the Vijaya Vittala temple. Hence travelled quite some distance to reach the parking spot of this complex. Had to cover the last 1km in Govt provided electric vehicles, which according to the locals was in order to reduce pollution in its vicinity and for its protection. As usual the stone chariot was getting all the attention. The other interesting part of this temple complex is the musical pillars of the Ranga mantapa. Unfortunately this area has been cordoned off for the tourists , for some renovation. The other mantaps also have these musical pillars which when hit softly with hand gives a very distinct musical note. And no two pillars give the same tone. But the main mantap had these musical pillars crafted with much more precision, only making us wonder what it might be like to hit these pillars. These pillars give this particular notes based on the fact that the heavy stone roof puts too much strain, resting on these quite delicate pillars. The basic concept is that of a guitar string :).

Hence after the completion of the enchanting second tour of Hampi, it was time to bring down the curtains on the Heritage tour of Karnataka. We moved towards Anantapura for the night, to explore Belum Caves and Gandikota , the following day.